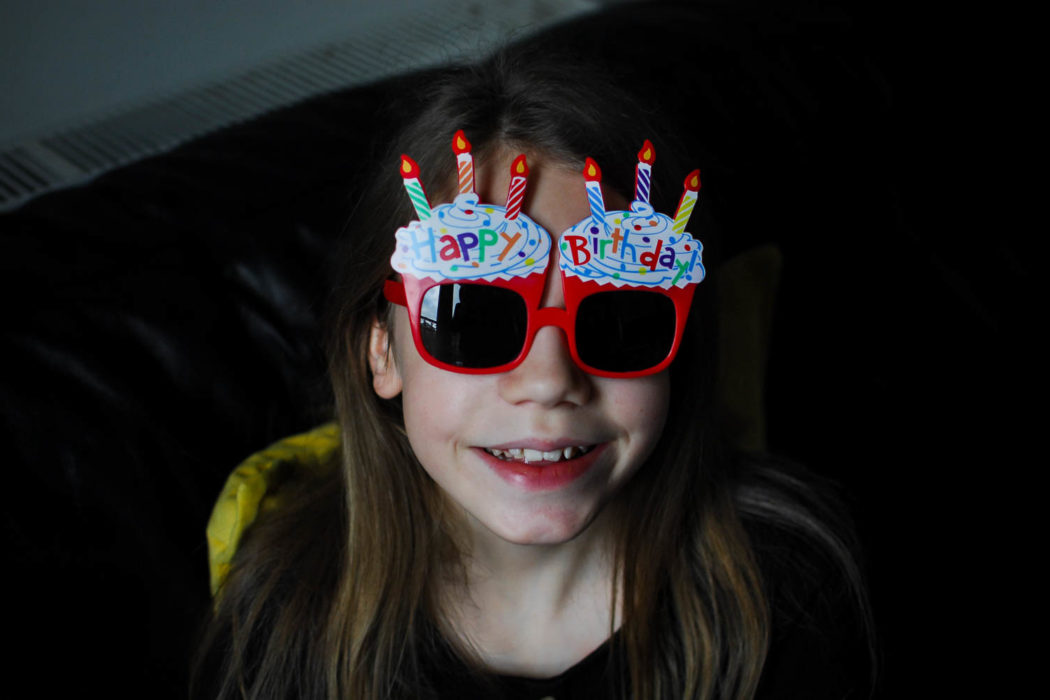 At the start of December, amidst the chaos of moving house, we celebrated Ella’s birthday and somehow my firstborn is now a teenager.  Thirteen!  And only a few inches off being the same height as me!  I can’t believe it.  It honestly doesn’t feel like thirteen years ago that she entered the world, launched me into my new, as yet unknown, role of motherhood and turned our lives upside down in the very best of ways.

A birthday tradition that I’ve done for all of the girls since they were tiny is to decorate the lounge the night before their birthday whilst they’re asleep in bed.  I fill it with balloons and banners and set out all of the birthday cards and gifts that I’ve had hidden all over the house for weeks on end.  I wasn’t sure if Ella would want this any more now that she’s growing up and then, on the eve of her big day, as I kissed her goodnight she turned her face towards me with wide-awake eyes and said excitedly “I can’t wait to see the lounge all transformed in the morning when I wake up!”.  I guess some traditions stay magical no matter what age you are. 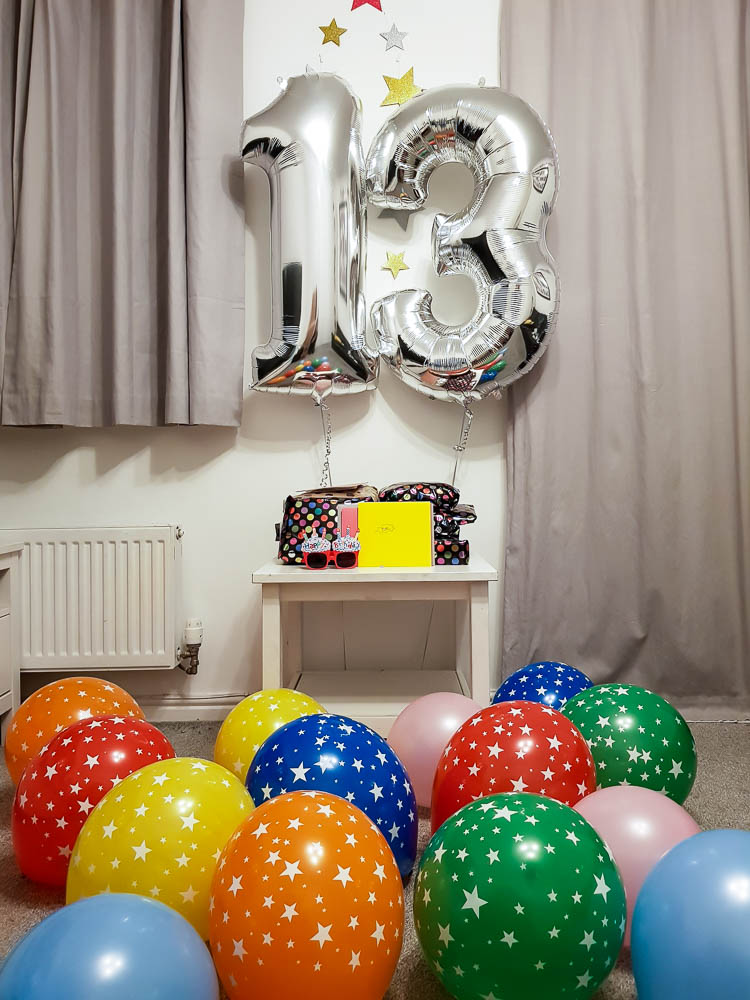 Birthday Eve, all ready for her big day

We spent the morning opening her cards & gifts and then calling everyone who had sent something for her to say thank you.  One thing I really love about all of my girls is how grateful they are for everything they receive, no matter what size they are or how much/little they cost.  The most modest of gifts are greeted with just as much joy and gratitude as their main present and they are fully aware of how lucky they are. 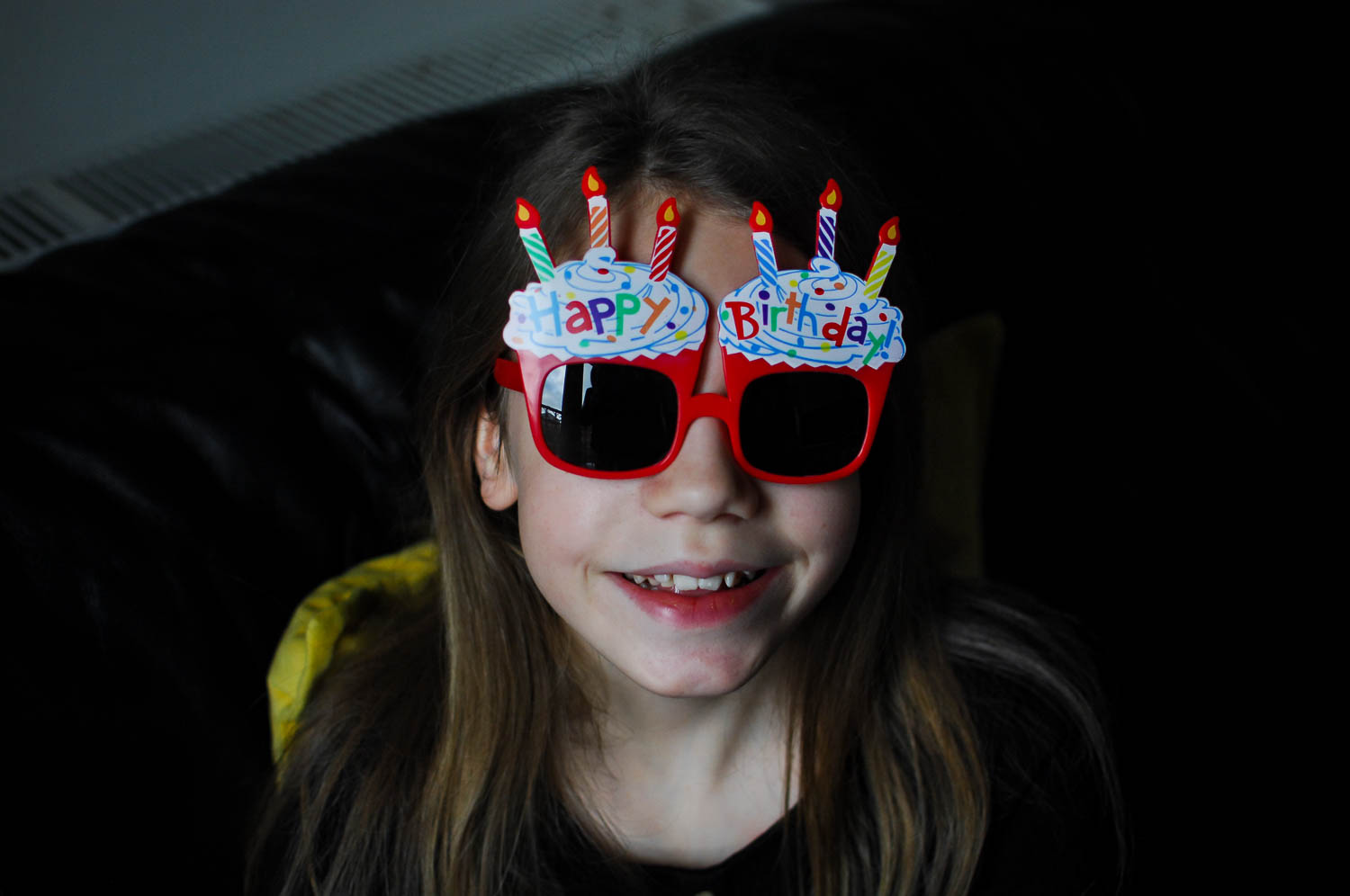 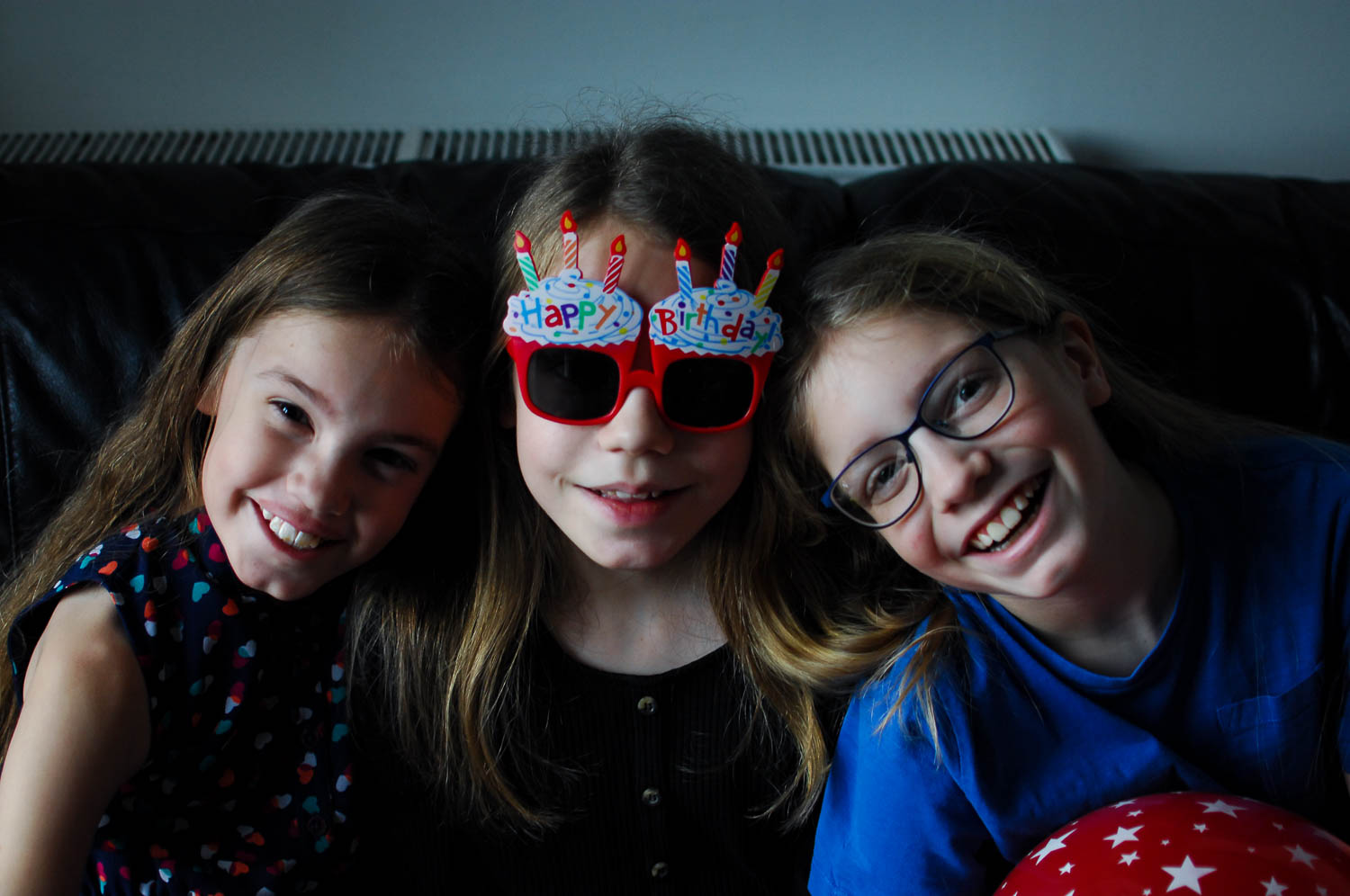 I always insist on getting a photo of the three of them together when it’s someone’s birthday. I’m planning to put a photobook together of all the images year by year once Lola, the youngest, turns 18.

Ella’s ‘big’ gift from us was a new phone – she’d been due an upgrade for a while and her old one was on it’s last legs, so she was thrilled with that. She was also happy with the rest of her presents from us and her sisters: some special books that she had specifically requested; some clothes she had picked out when she and I had been shopping together a couple of weeks earlier; plus some fluffy socks and facemasks. 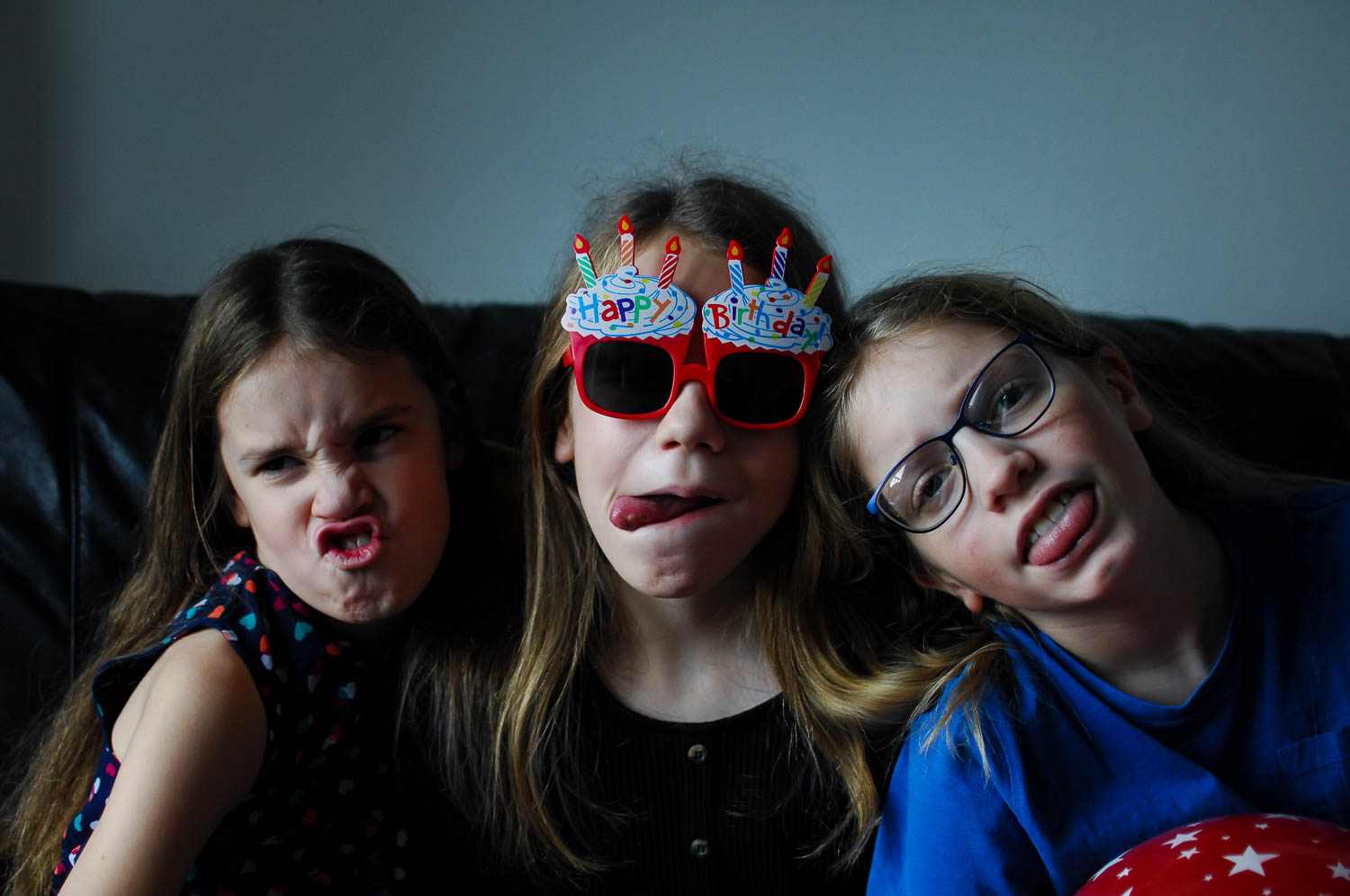 A ‘silly face’ photo to get them all laughing is also a must! Out of all the photos I take, these ones are among my favourites 🙂 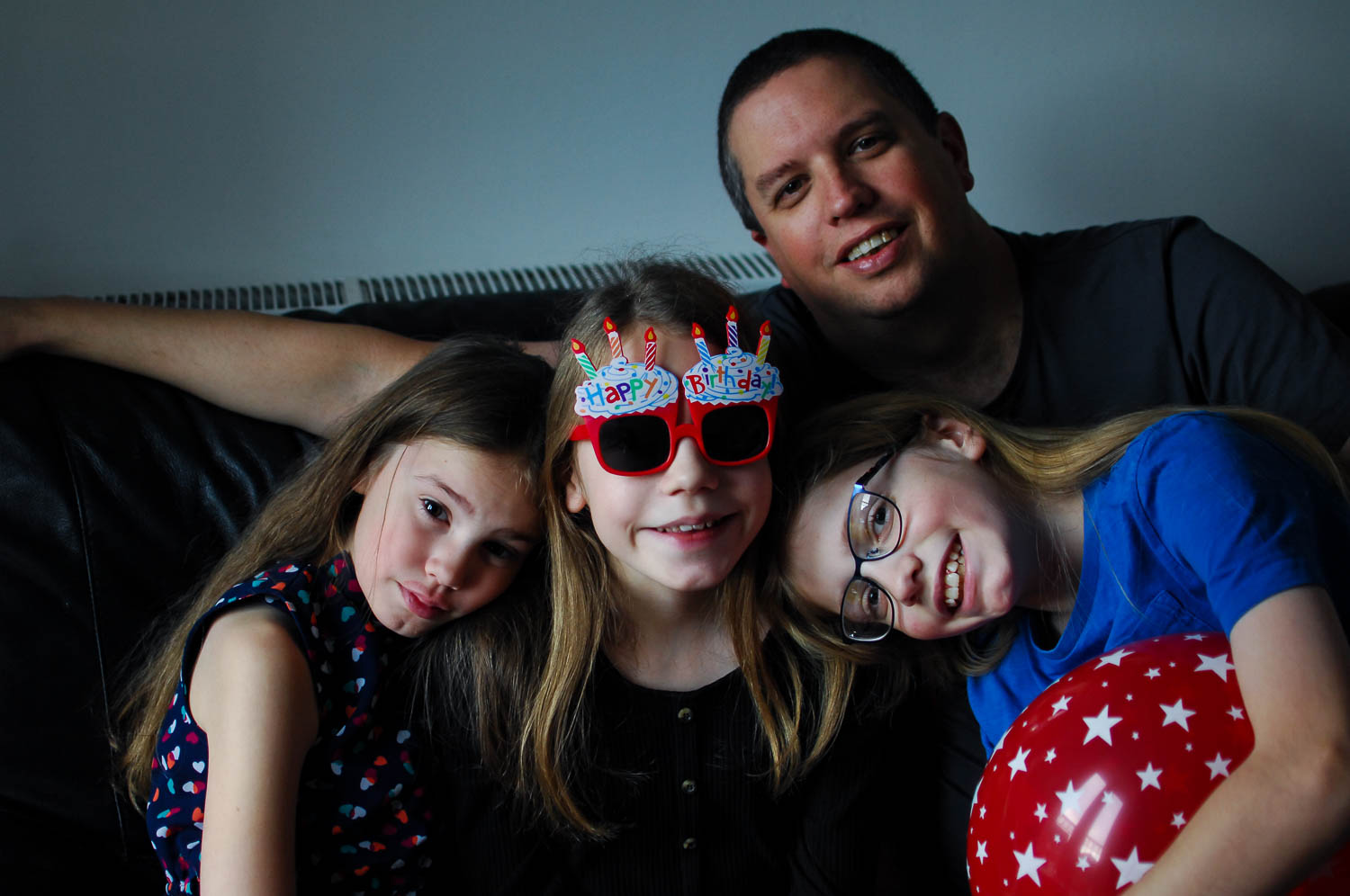 Managed to get Dad (as she now calls him, rather than ‘Daddy’) in the frame too

We don’t really do parties for the girls.  I prefer to offer them a ‘birthday treat’ instead, which takes the form of an experience they want to have or place they want to visit.  In previous years the girls have chosen to go to places like Flip Out or Come Into Play (a huge indoor adventure playground for all ages), or to go bowling or watch a film at the cinema with a couple of friends.

This year I knew that Ella really wanted to see a film called ‘Last Christmas’ which was out in the cinema at the time of her birthday and so she and I spent the afternoon of her birthday on a mother-daughter ‘date’ together.  We had lunch at Starbucks first and then watched the film at our local Odeon together.  It was a romantic comedy and rated a 12A – her first proper ‘grown up’ film at the cinema.  It was laugh-out-loud funny and sad and romantic and poignant all at once. I think she enjoyed it. 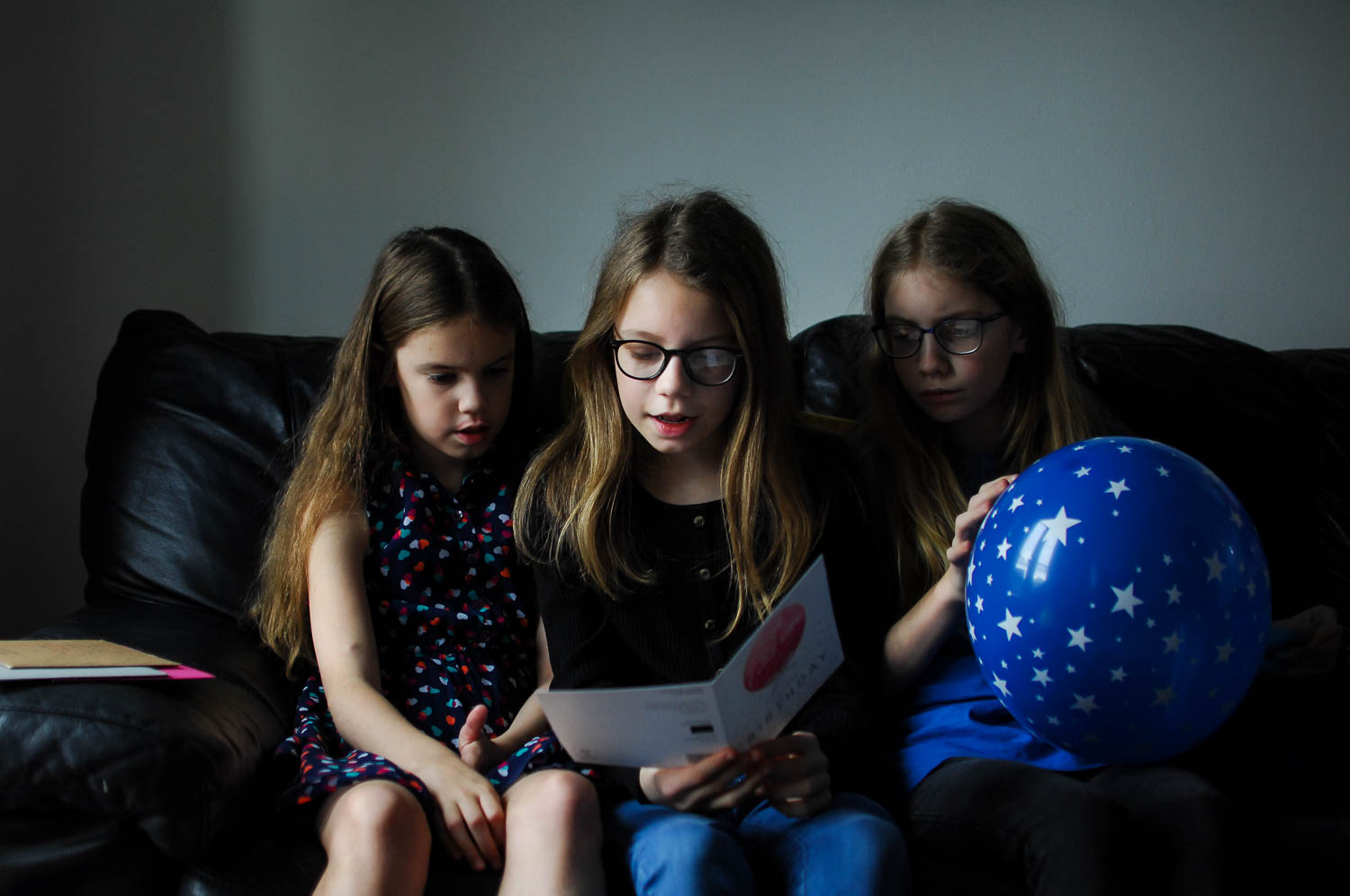 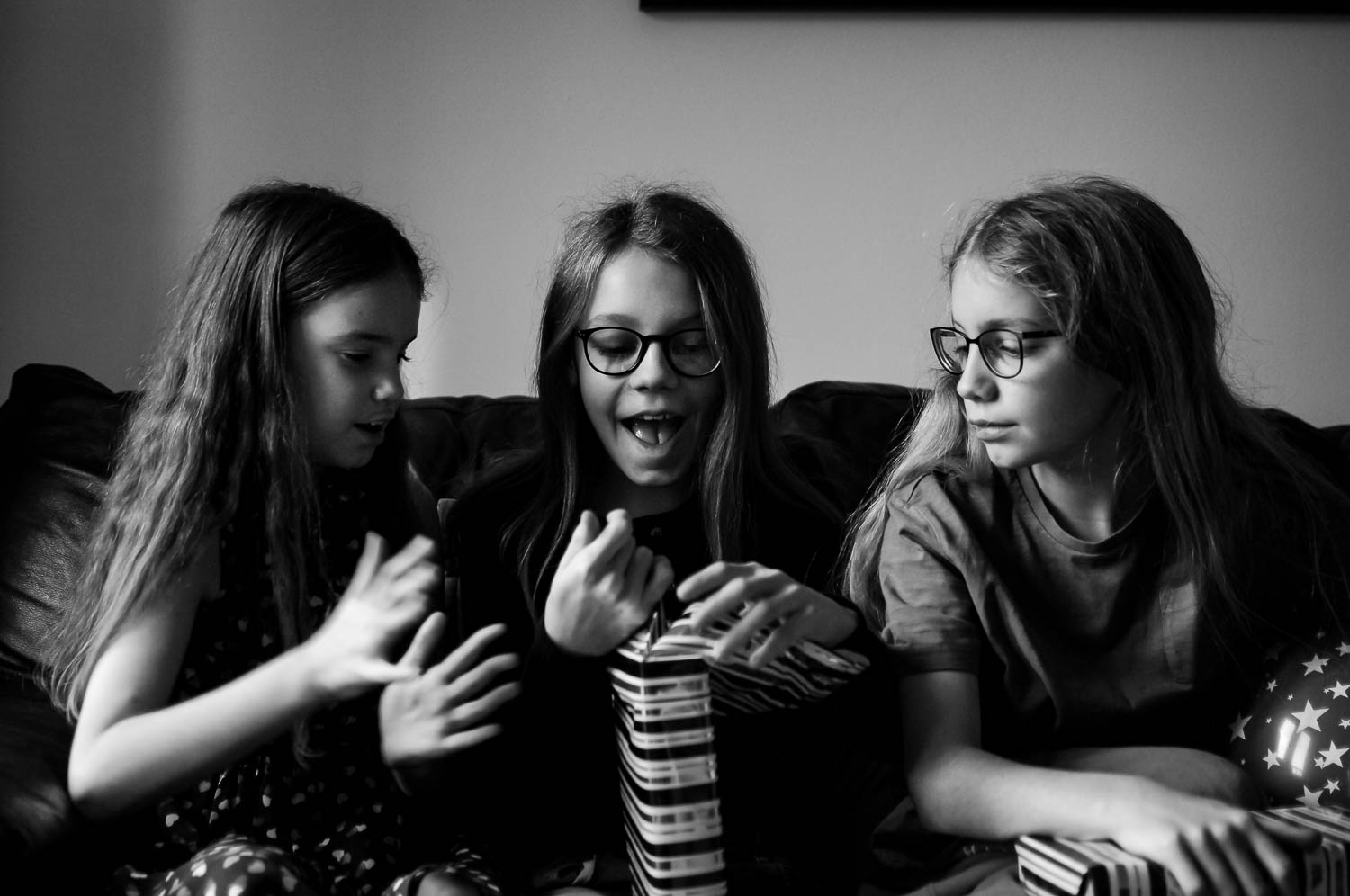 Opening her birthday gifts. This one was a special edition book that she’d been coveting for months. I think she was happy!

After the movie we went home for birthday cake (chocolate of course!) with her Dad and sisters.  I always wonder what she wishes for as she blows out her candles.

We usually go out for dinner when it’s someone’s birthday, but because we were due to move house just three days later it meant we were on a budget and everything was a bit chaotic, so we opted to stay home instead.  I offered to make her whatever she wanted for dinner and she requested pancakes, so that’s what they had!

Even with everything we had going on: packing the house up ready to move after months of not knowing if it was ever going to happen; attempting to do some preparation for Christmas; and both the husband and I being busy with work, I tried to make a big fuss of her on her special day.  After all, it’s not every day you become a teenager!  I hope she felt the love that was present in our efforts. 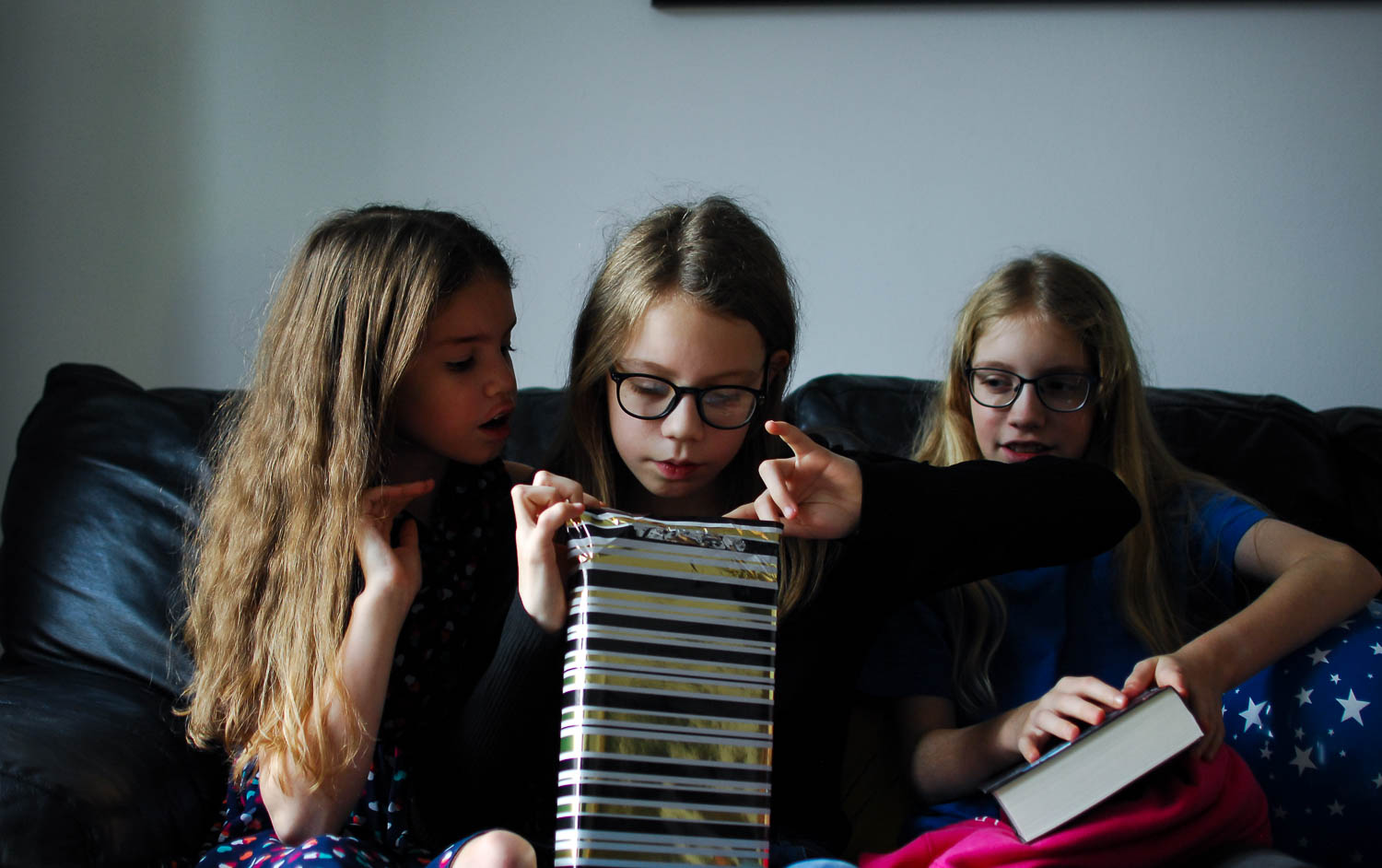 I wonder what this one could be… 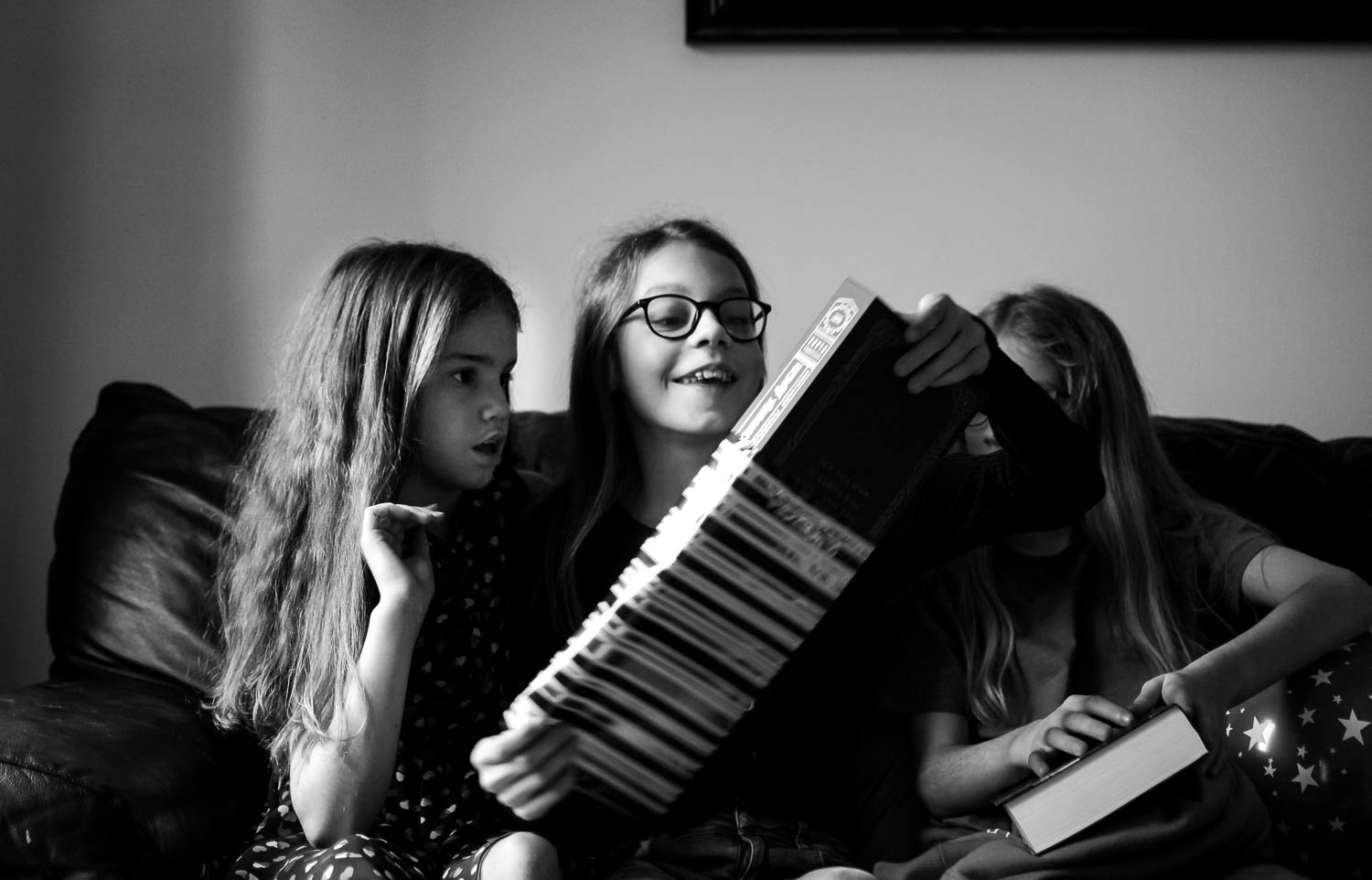 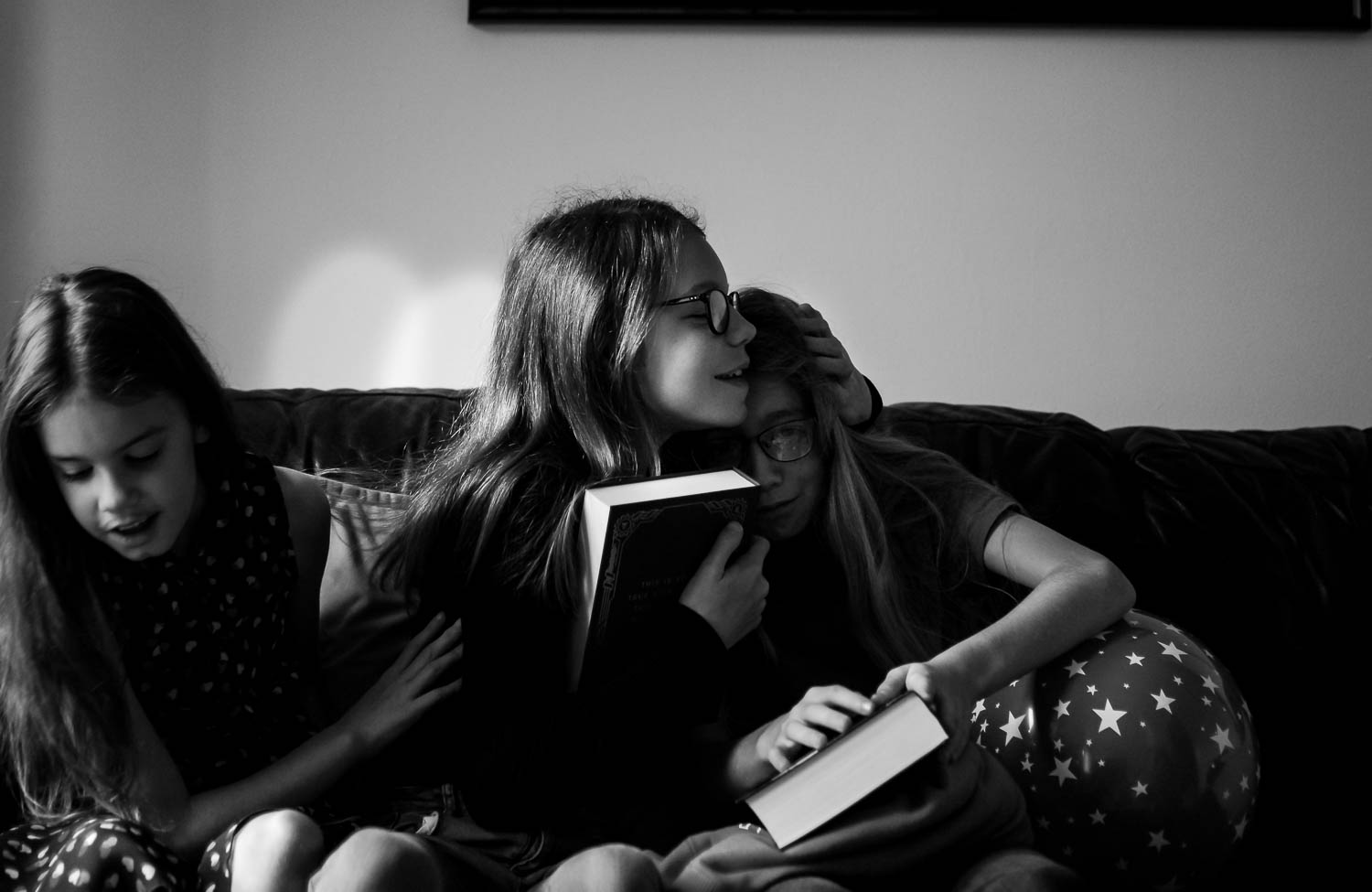 I love this photo – the look on Mimi’s face! She’s not a fan of hugs but just about tolerates them when they’re birthday thank yous.

Despite always ‘knowing’ that I would one day have daughters (I can’t explain it, I just knew deep down from a young age that I would be a mum of girls)  and imagining the days we would spend together when they were babies, toddlers and tweens, I used to really dread the teenage years.  After all, my own weren’t exactly smooth sailing and that’s the main reference I have for what teenage life is like.  But as we’ve got closer to Ella reaching teenagerhood I’ve found that I’m actually kind of looking forward to it.

I know we’ll have our fair share of ups and downs and trials and tribulations and arguments and heartbreak along this next part of the journey – the mother/daughter relationship can be a complex thing and I have to learn to let her go just as much as she has to learn to be brave and step into the unknown away from the safety of being with me all the time.

I also know there will be many celebrations, triumphs, soul-building conversations, abundant love and lots of fun to be had.  Ella is ace to be around (they all are) and as cheesy as it probably sounds all three girls really are my best friends in many ways.  We laugh and talk about life and make future plans together.  And now that Ella is thirteen I get to introduce her to ‘Friends’!

She’s struggled a bit since starting high school just over a year ago and there have been lots of worries and some low moods coupled with a lot of changes at home over the last couple of years. Hormones have started kicking in of course and sometimes I feel like I’m parenting an entirely different child but that’s ok. She’ll get through it: she’s not who she’s going to be yet.

I just have to keep being available, keep listening to her, keep offering support and encouragement and keep loving her as fiercely as possible. All whilst giving her space to figure things out on her own and to become a bit more independent.  Hmm…  I suppose we’re both navigating this new teenage landscape together and making it up as we go along – we’ll figure it out together. 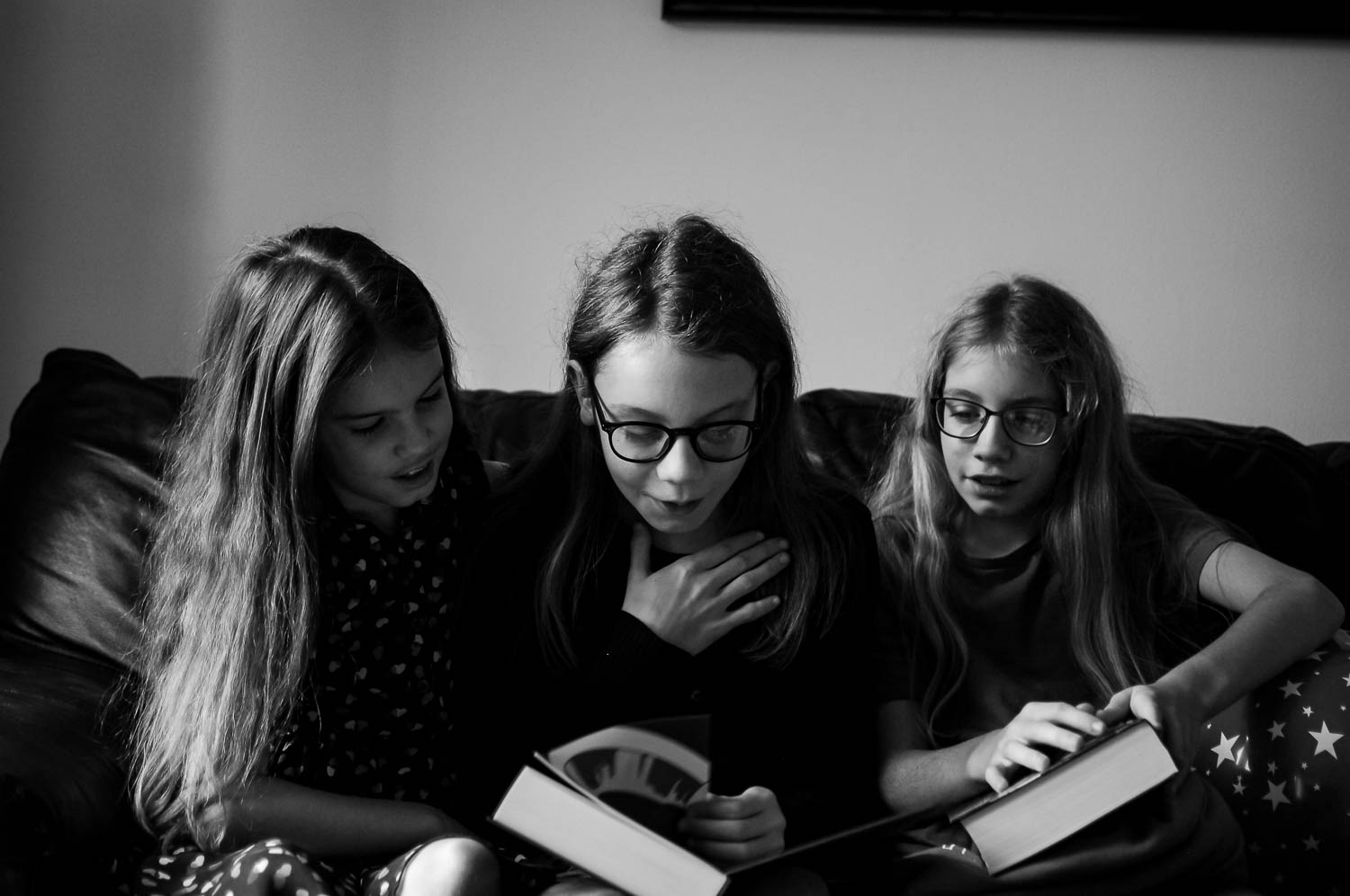 This gift was one of her favourites – look how touched she is by it. 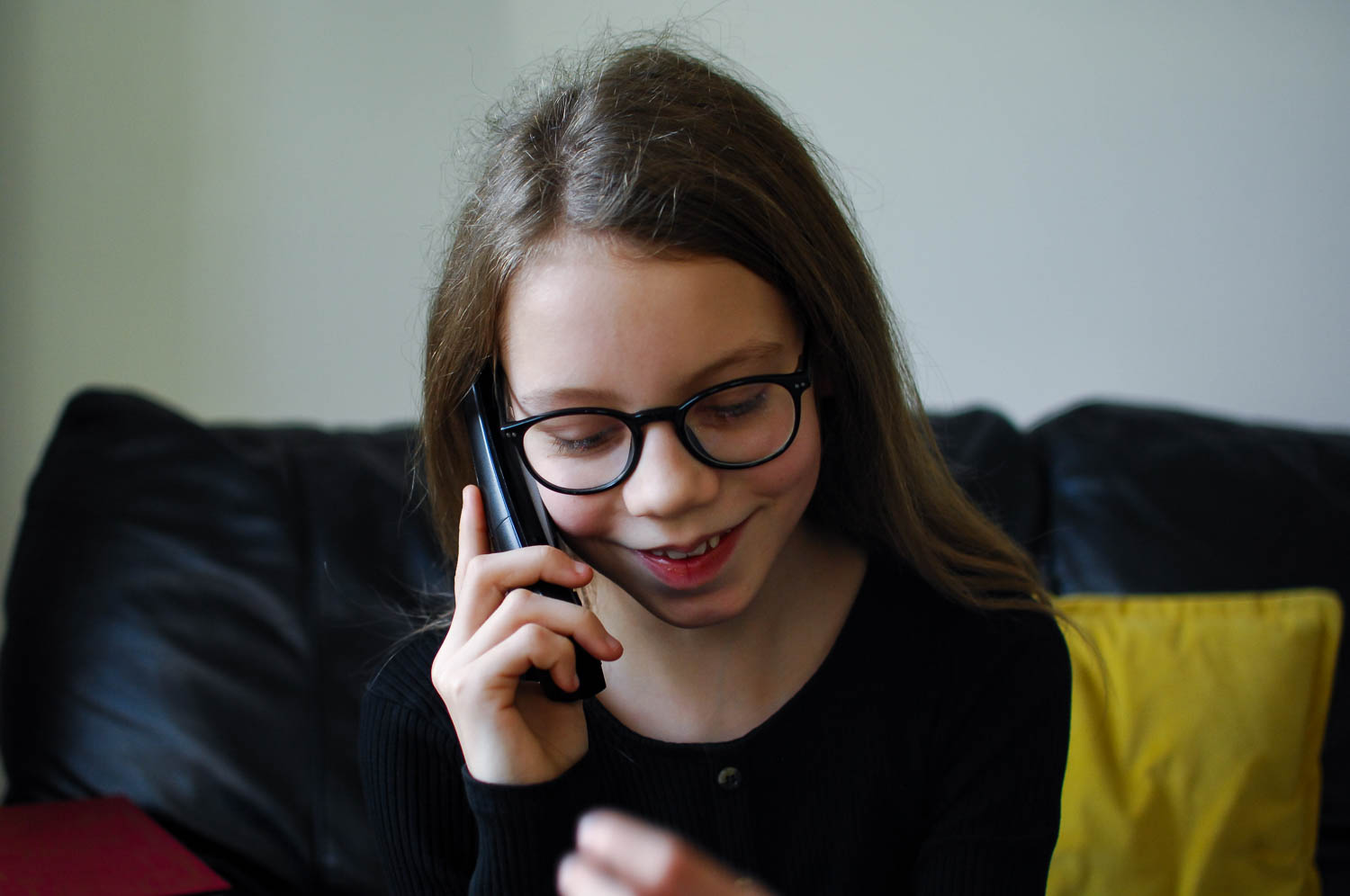 Calling her grandparents to say thank you for her presents

Last year I asked all three girls to answer each of the following questions on their birthday.  I wanted to start a little tradition of asking them each year so I can document them as they change for each of the girls over time.  Here are Ella’s answers for this year. I was interested to notice that some things remained constant whereas others had shifted to reflect the new version of herself that she’s gradually becoming.

This is Ella, aged thirteen… 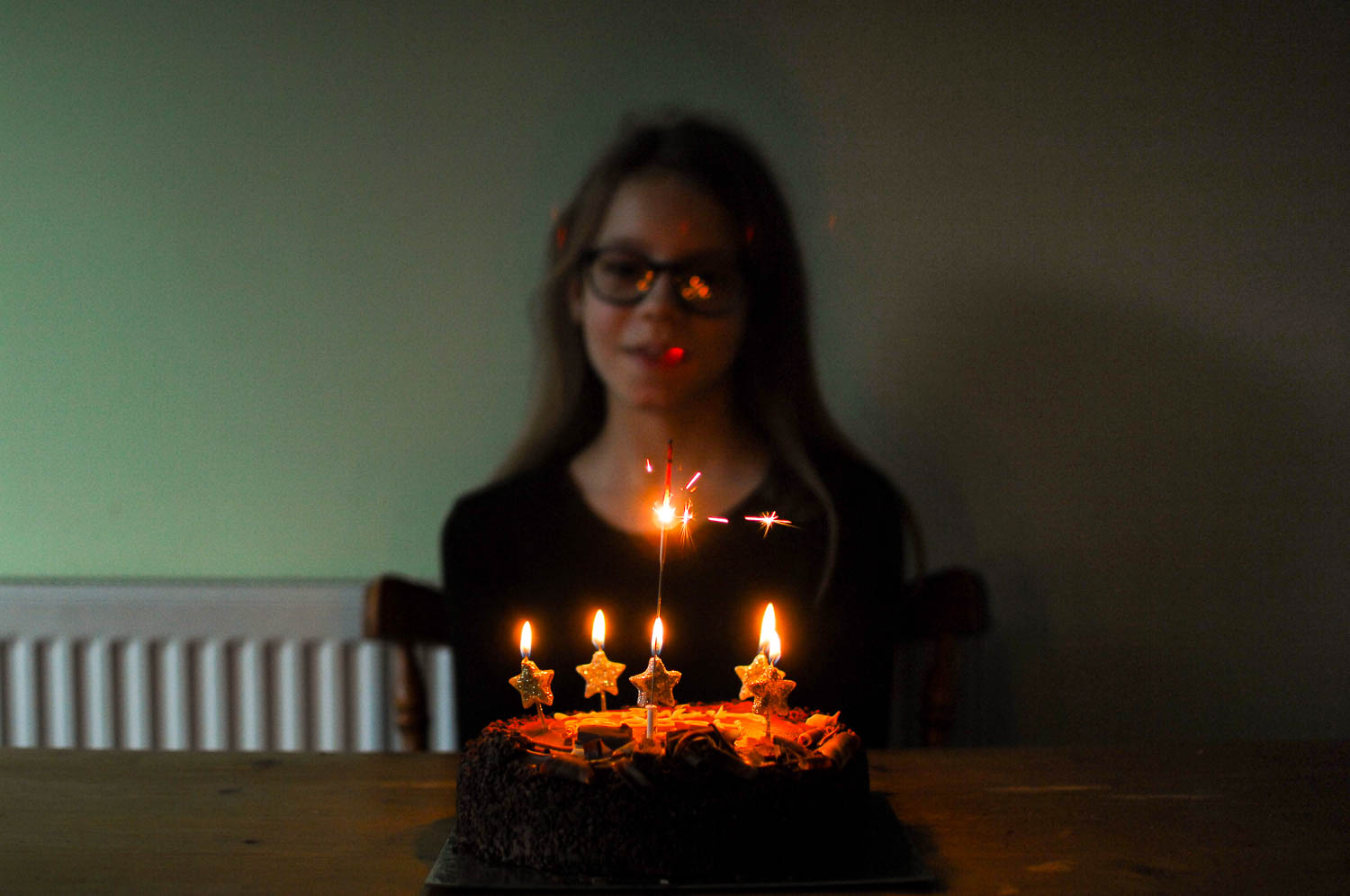 Getting ready to blow out the candles on her birthday cake 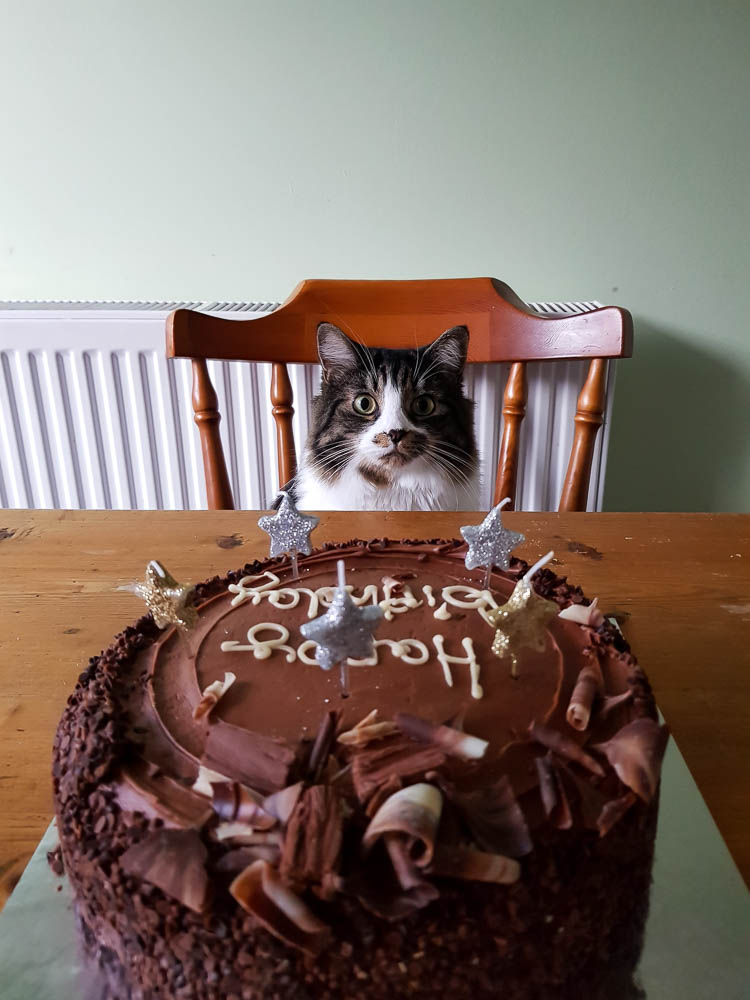 This photo (a quick snapshot on my phone because that’s all I had to hand) makes me laugh every single time I see it. Luna patiently waiting for her slice of birthday cake!

I can’t even begin to explain how proud I am of Ella. Thirteen years seems to have gone by so quickly and she’s growing into such an awesome human. She’s kind and thoughtful and imaginative and funny and creative and smart and loving and many, many other things besides.

Being her mama is one of the greatest privileges I’ve ever had and I can’t wait to see more of who she’s becoming.

A Weekend With Friends

A couple of weeks ago my best friend and her husband came to stay with us for the weekend.  It had been over a year since we…