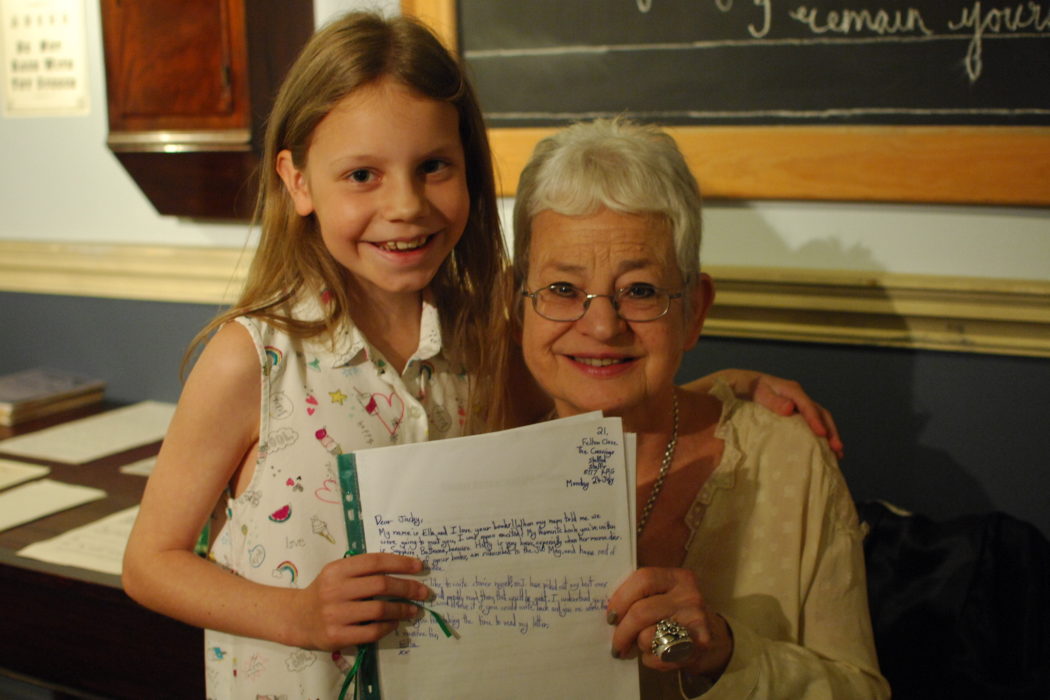 I’ve been blogging for about 18 months now and, whilst I’ve not earned a single penny for my work (yet), I have been able to create some fun experiences for my girls to take part in.  They may not pay the bills but they are teaching my daughters many valuable lessons: to say “yes” to having adventures; to grab opportunities with both hands; to know that working hard brings it’s rewards; to not have regrets; and to realise that having fun and trying out new things is far more important than how much money you have in the bank.

One of these experiences landed in my inbox about a week before the summer holidays.  An email offering us the chance to visit The Foundling Museum in Central London to attend the ‘Picturing Hetty Feather’ exhibition before trying out their very first family workshop to launch the summer season of events.

If you’ve been following my blog for a while you’ll know that our eldest daughter, Ella, is an avid reader and writer.  Her one fierce desire is to become an author when she’s older.  She has loved reading Jacqueline Wilson’s books for two or three years now and some of her absolute favourites are those which feature the character of Hetty Feather – a feisty, young, Victorian girl who grew up in The Foundling Museum.  Ella is also a huge fan of everything historical and has an incredible memory for facts and information, so stories set in the past like Hetty Feather feed her thirst for knowledge and spark her imagination in ways that make her light up inside.

Of course I jumped at the chance to attend the event, knowing how excited Ella would be to learn more about the character she loves, to see costumes from the CBBC TV programme and to be able to look around the real-life setting of the books she adores.  It would also be all three girls’ first ever visit to London, which I knew Mimi and Lola would be super-excited about, even if the exhibition itself wasn’t necessarily something they would normally be interested in.

Something I left until the very last minute to tell them was that for the first hour of the event Dame Jacqueline Wilson herself would be there!  She was going to talk a little bit about Hetty Feather, explain her role as a Fellow of The Foundling Museum and share how she became inspired to write the books.  When Ella found out about this part I thought she might explode with excitement – meeting Jacqueline Wilson in person has been a dream of hers for quite some time now.

And so, on the first Tuesday of the summer holidays, we all got up before dawn, bundled into the car, drove the two and a half hours down to my parent’s house and jumped on the Tube.  That was an event in itself for the girls – they’d never experienced anything like the London Underground before and it pretty much blew their minds with it’s busy-ness and noise and movement. 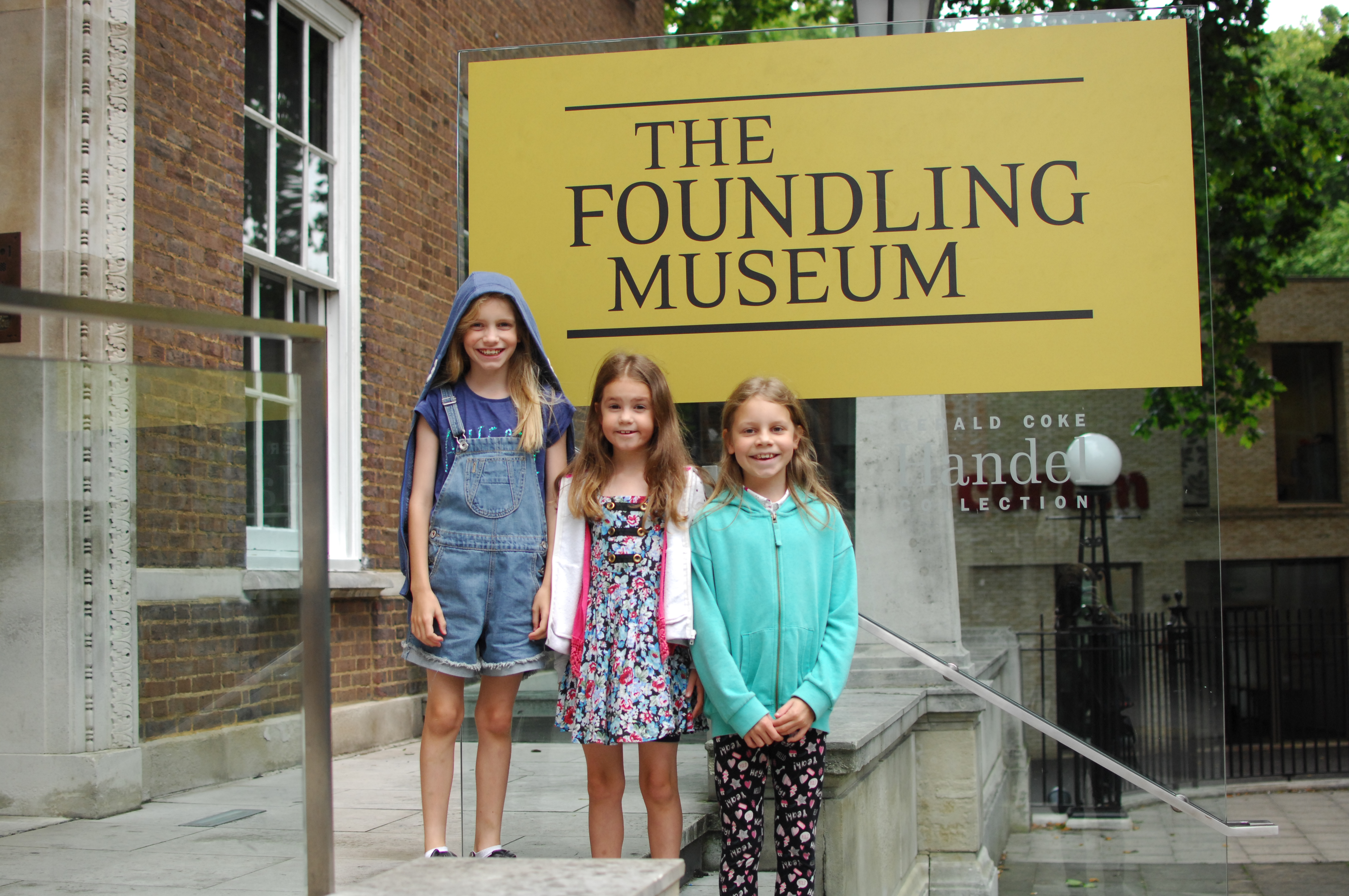 Outside The Foundling Museum, very excited!

We arrived at The Foundling Museum right on time and were ushered into the ‘Picturing Hetty Feather’ exhibition.

I’ll be honest, I’d done a little bit of research into the Museum but I didn’t know very much about it.  What I learned from our time there is that The Foundling Museum explores the history of The Foundling Hospital, the UK’s first ever children’s charity, which was established back in 1739 by philanthropist Thomas Coram in order to care for babies at risk of abandonment.  Artist William Hogarth and composer George Frideric Handel helped Coram by donating artwork (establishing the UK’s first ever public art gallery) and conducting benefit concerts, creating a strong link for how the arts can help support charitable giving.  The first babies were admitted in 1741 and the last pupil was placed into foster care in 1954, with around 25,000 children cared for in total throughout those two hundred years.  It’s quite astonishing really when you think about it.

The ‘Picturing Hetty Feather’ exhibition was fascinating.  Jacqueline Wilson’s fictional book is written through the eyes of Hetty, who was left as a baby at The Foundling Hospital by her mother, and describes what life was like there.  We followed the Hetty Feather Trail, learning all about how babies were admitted into the Hospital (they were quite literally ‘black-balled’ if they weren’t accepted – mother’s had to put their hand into a bag and pick out a coloured ball.  White = accepted, black = not admitted and red = waiting list); tokens; identification numbers; being given new names; clothing; schooling and the food they ate.  There were plenty of displays to look at – costumes from the CBBC TV drama, original photographs, manuscripts and books etc – and lots of activities to take part in, such as dressing up in costumes, creating menus, drawing and colouring.

Ella trying on the costumes and dressing up like Hetty Feather 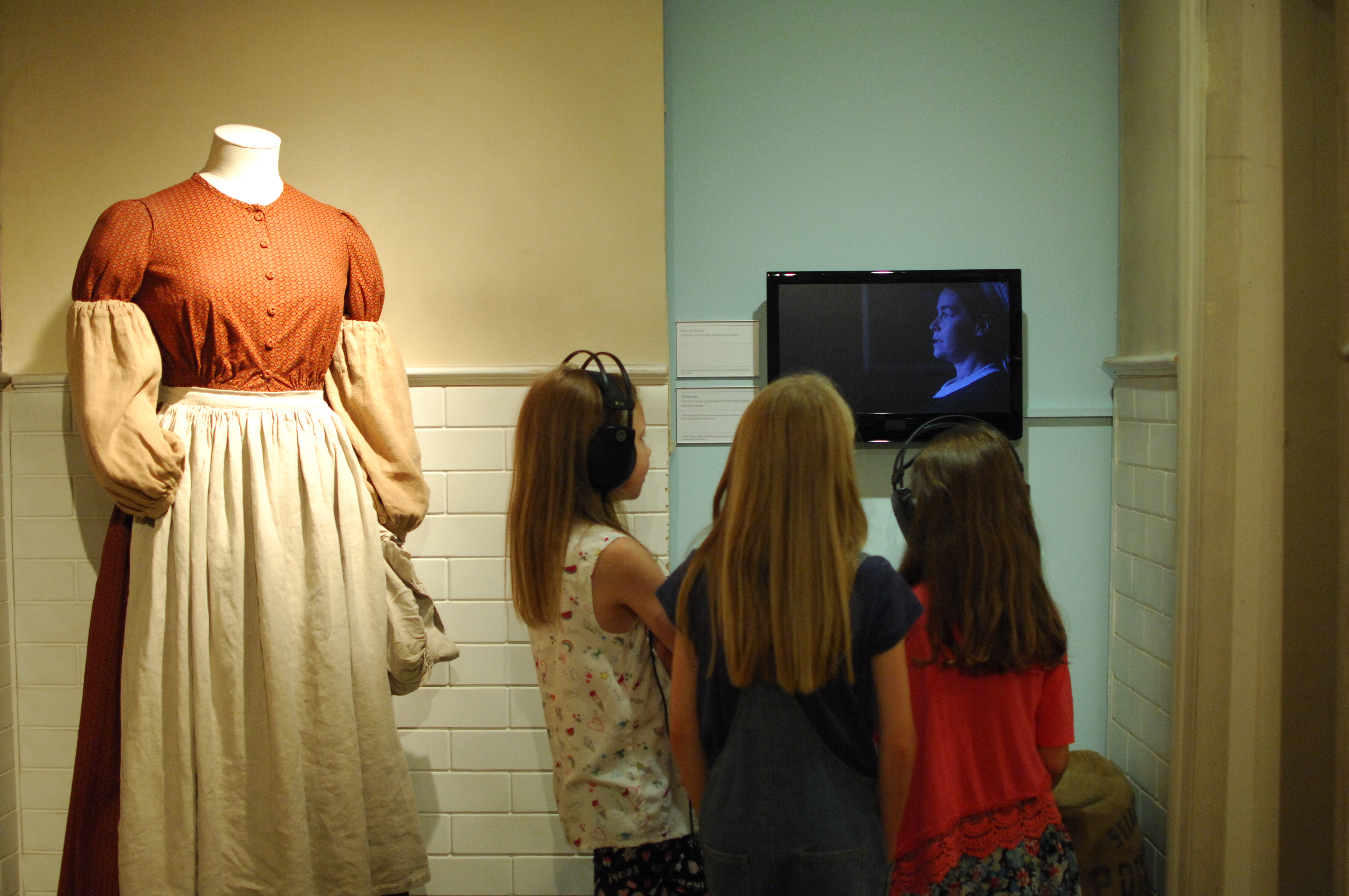 Watching an excerpt of the Hetty Feather CBBC television production 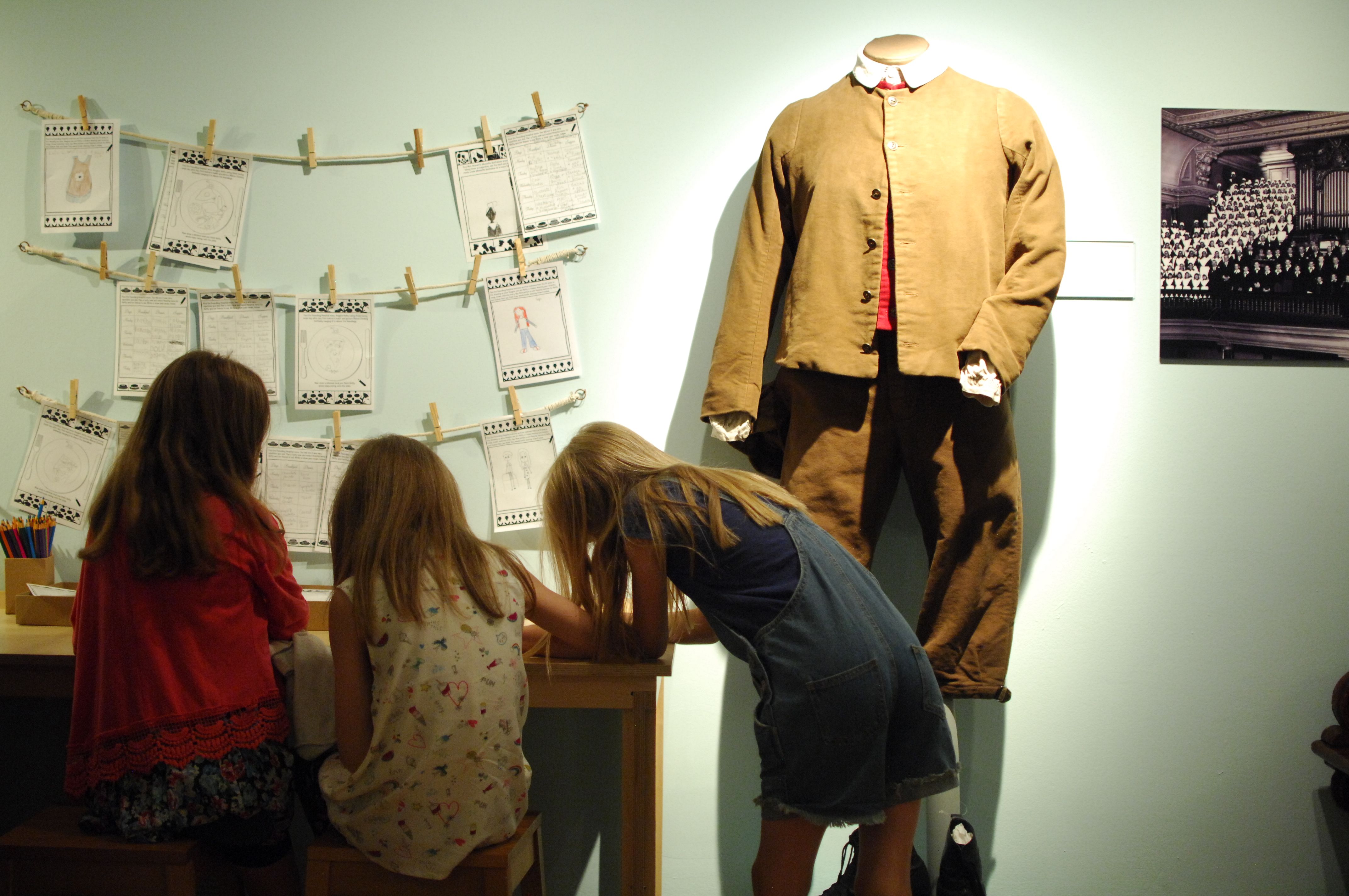 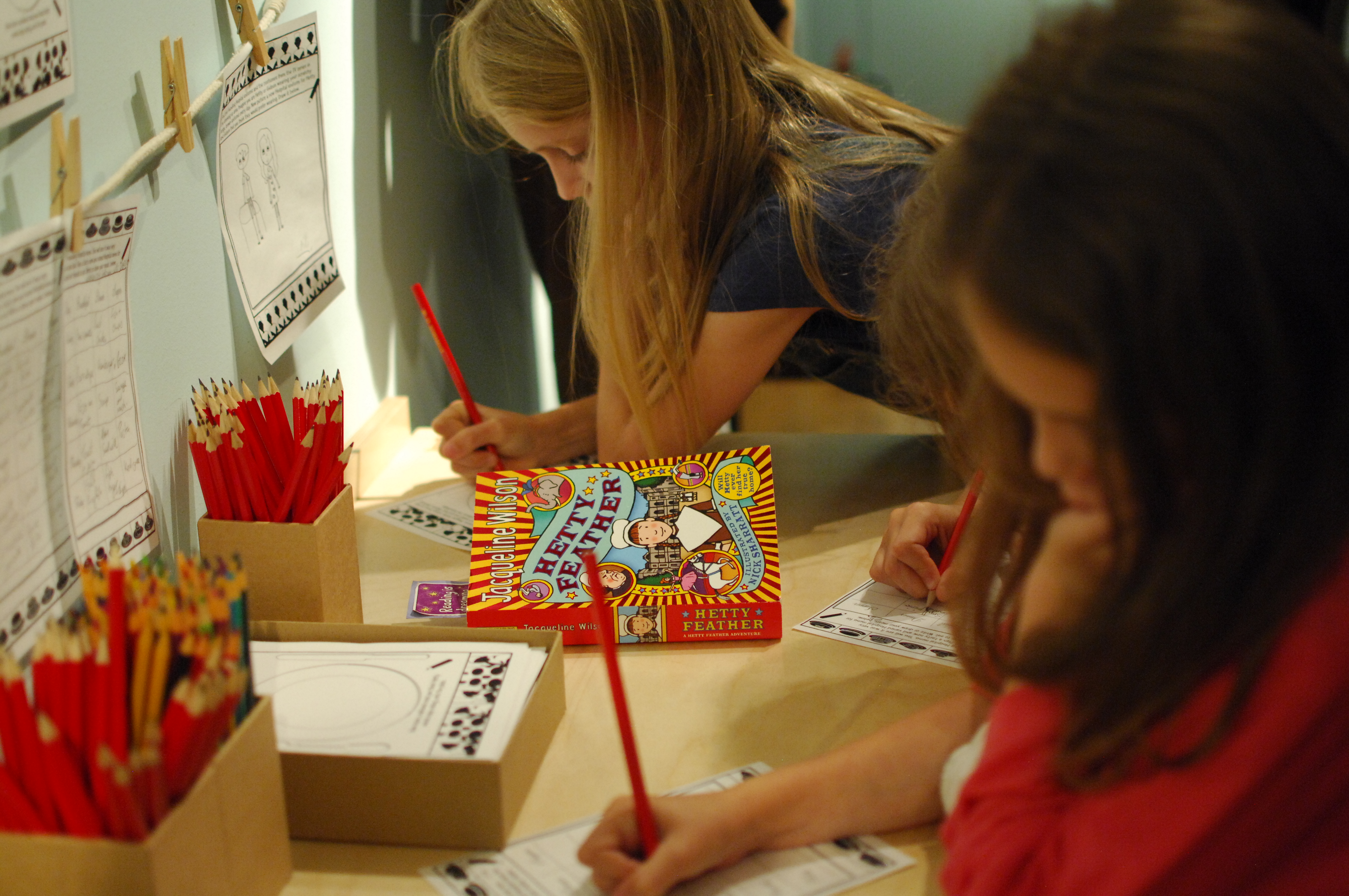 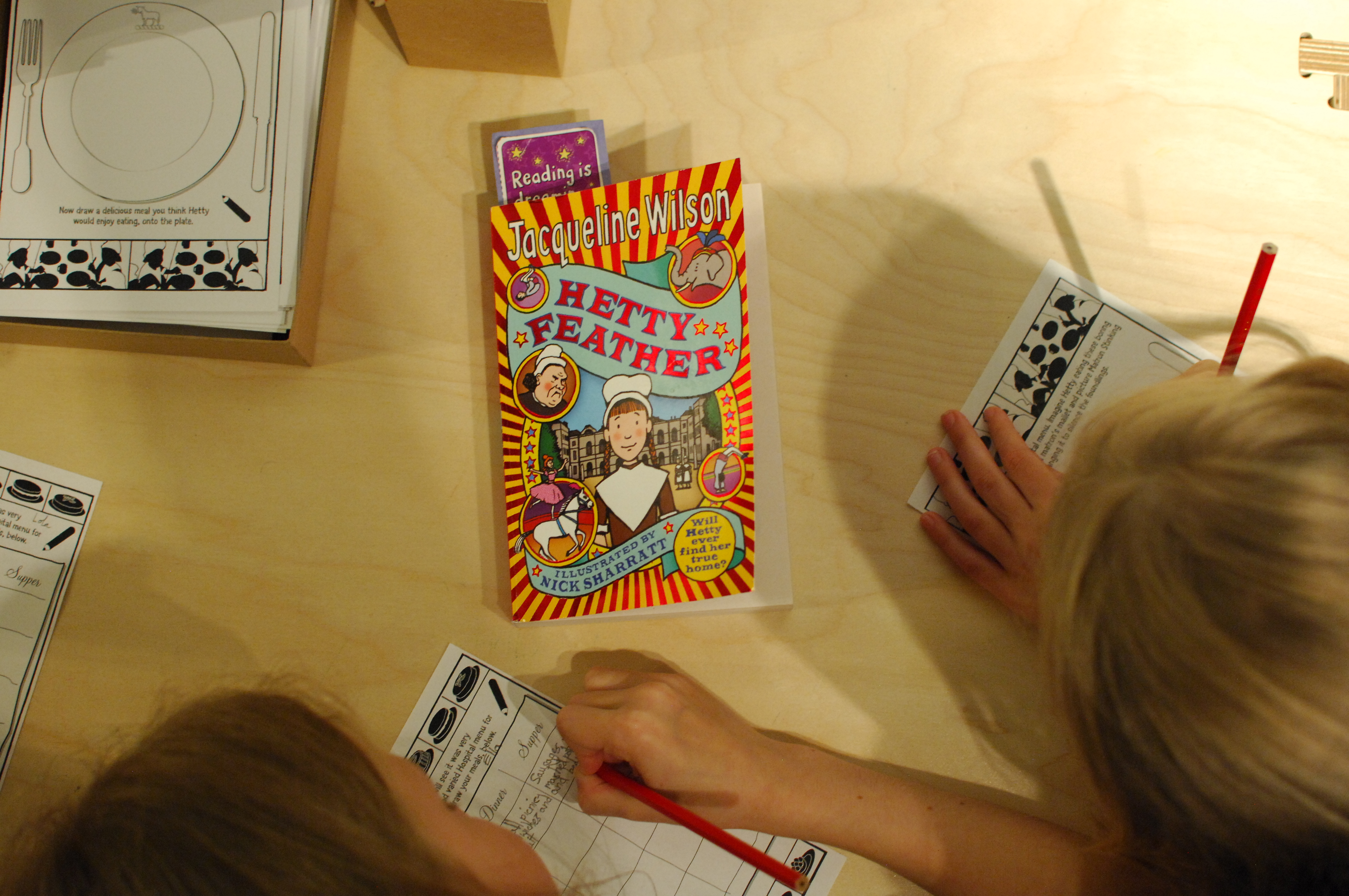 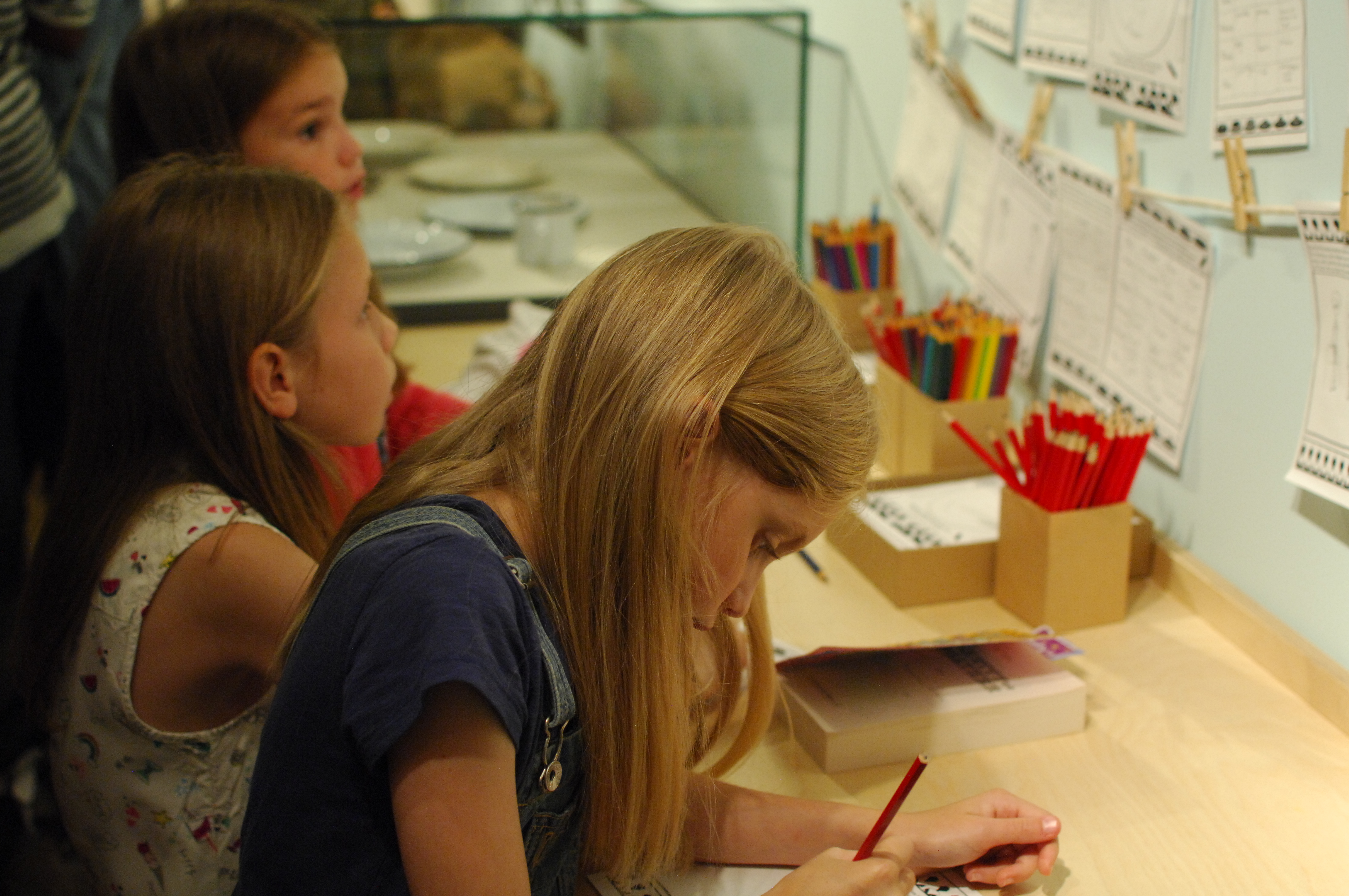 Of course the main highlight of the day was Dame Jacqueline Wilson’s appearance.  I always think it’s quite strange when you meet someone that is so well-known and loved by the nation.  A curious feeling of familiarity and awe all rolled into one.  She was lovely – petite and engaging, with kind twinkly eyes.  We listened to her describe her role as a Fellow of the Foundling Museum and how she became inspired to write Hetty Feather – it was clear that she had a deep connection with the cause and cared deeply about the Museum.

We listened to her read the first few pages of Hetty Feather out loud and the whole audience was captivated – hearing an author bring their own story to life is something very special indeed.  Ella was enthralled and didn’t take her eyes off he the whole time.  Afterwards, as we queued to meet Jacqueline Wilson, Ella gripped my hand tightly and whispered to me that she was nervous and excited to meet her all at the same time.  In her other hand she clutched her copy of Hetty Feather and a little collection of her best stories, which we’d tied together with a ribbon.  When it was our turn Ella got a little bit star-struck bless her, so I explained to Dame Wilson about Ella’s stories and she very kindly agreed to take them with her to read through on the train on the way home.  She then signed Ella’s copy of Hetty Feather, posed for a photo and we moved on so the person behind us could have their turn to meet her.  We had about five minutes with her in total and I think they might just have been the best five minutes of Ella’s life 🙂 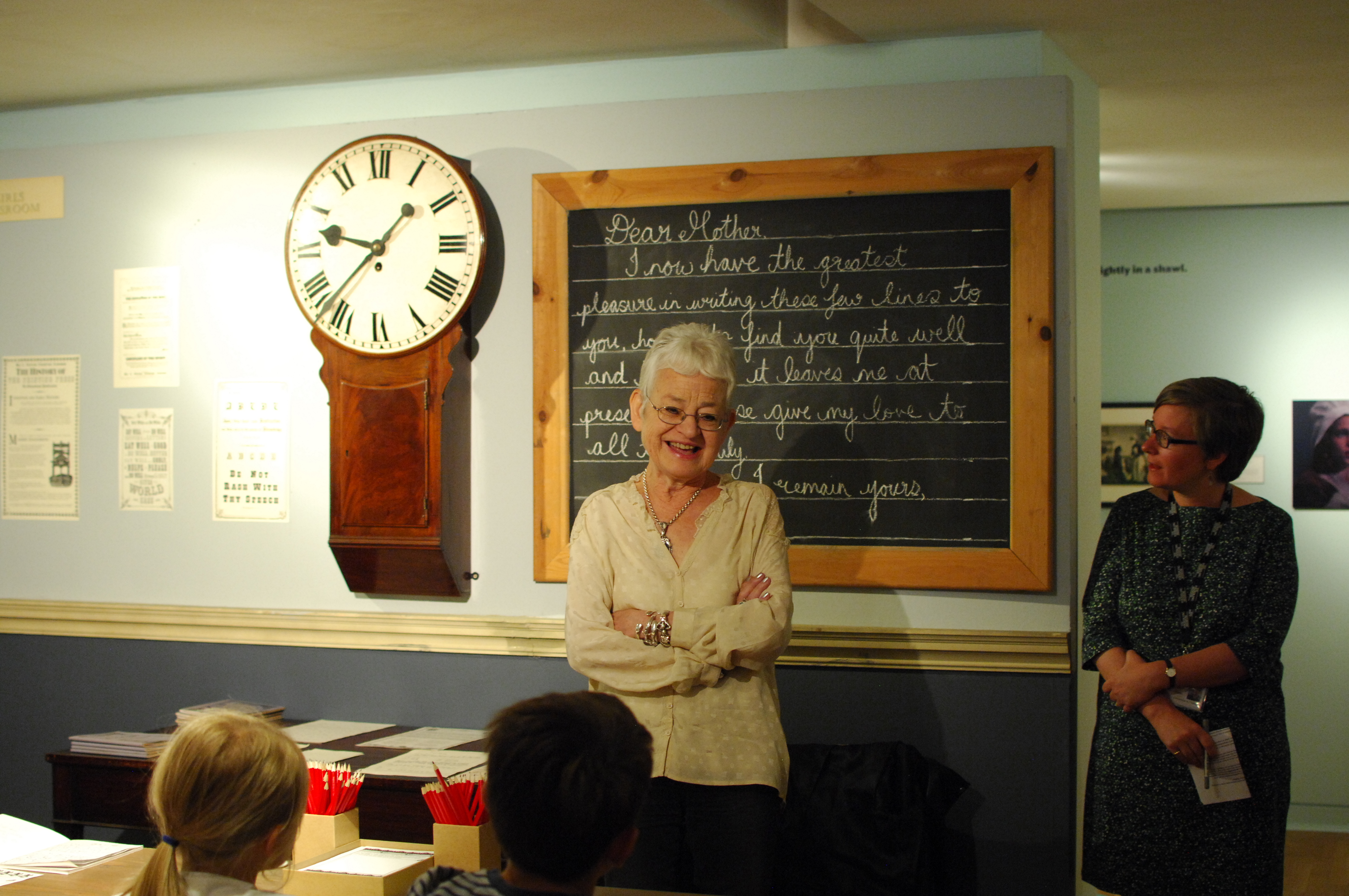 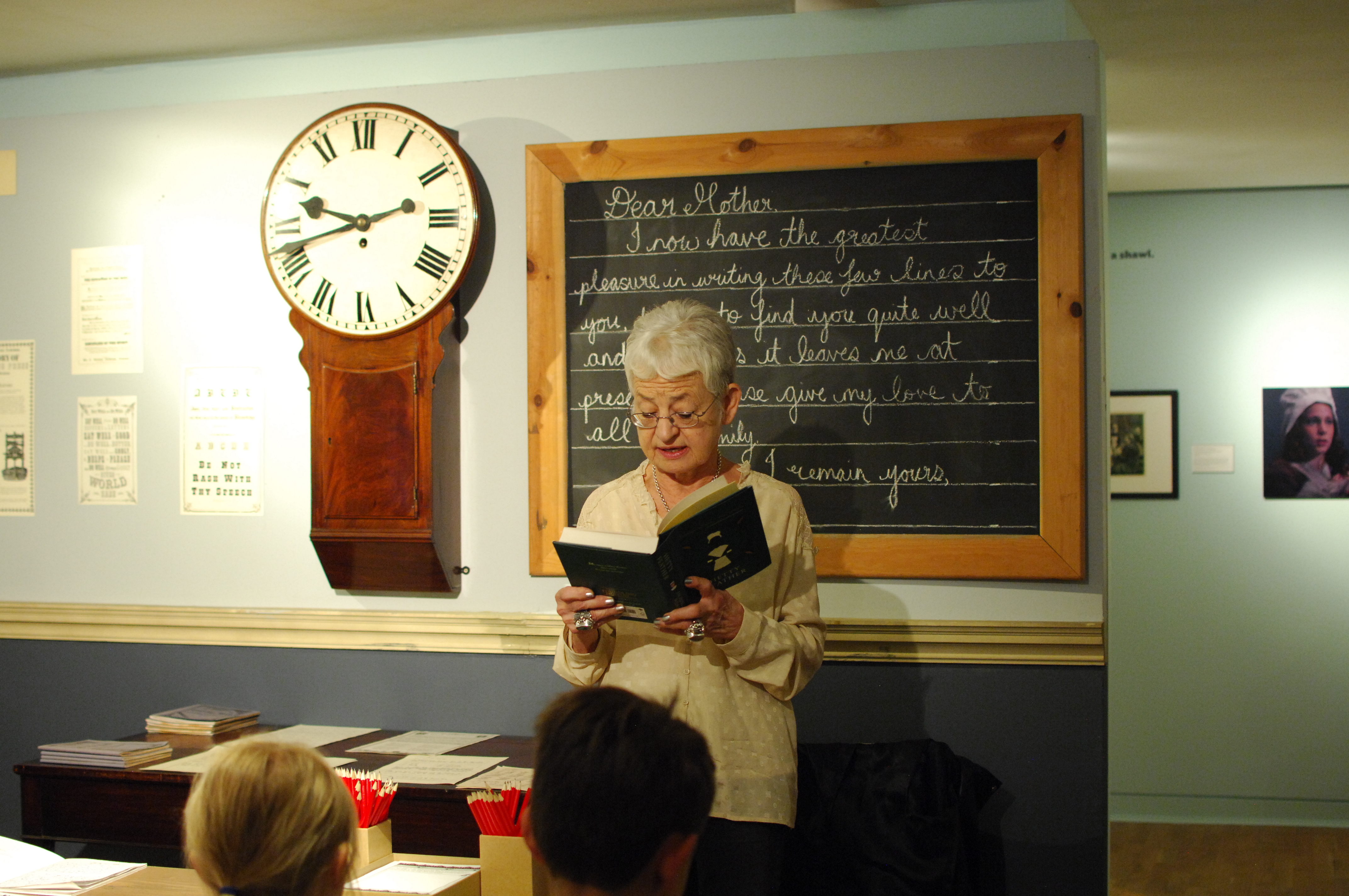 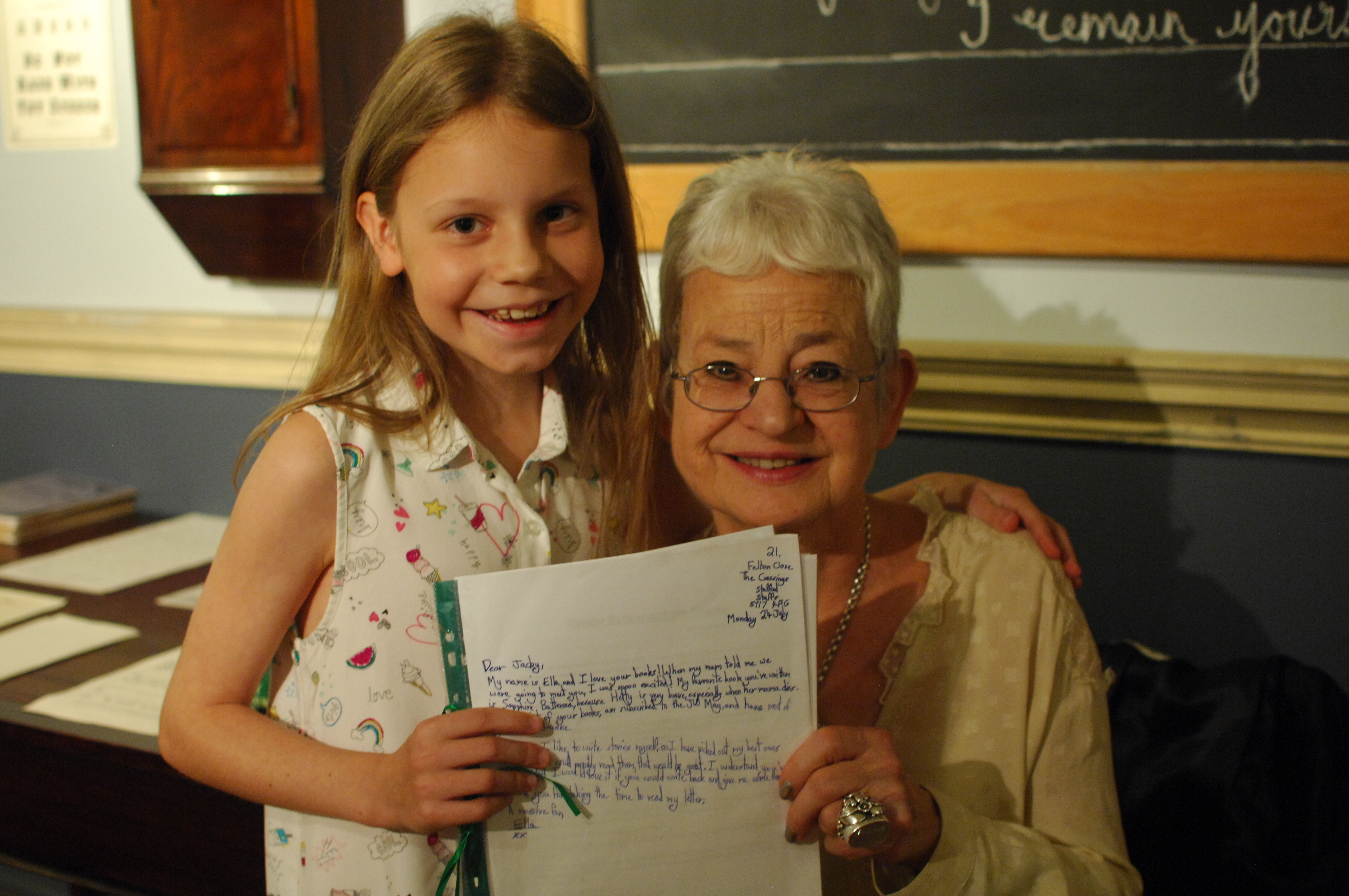 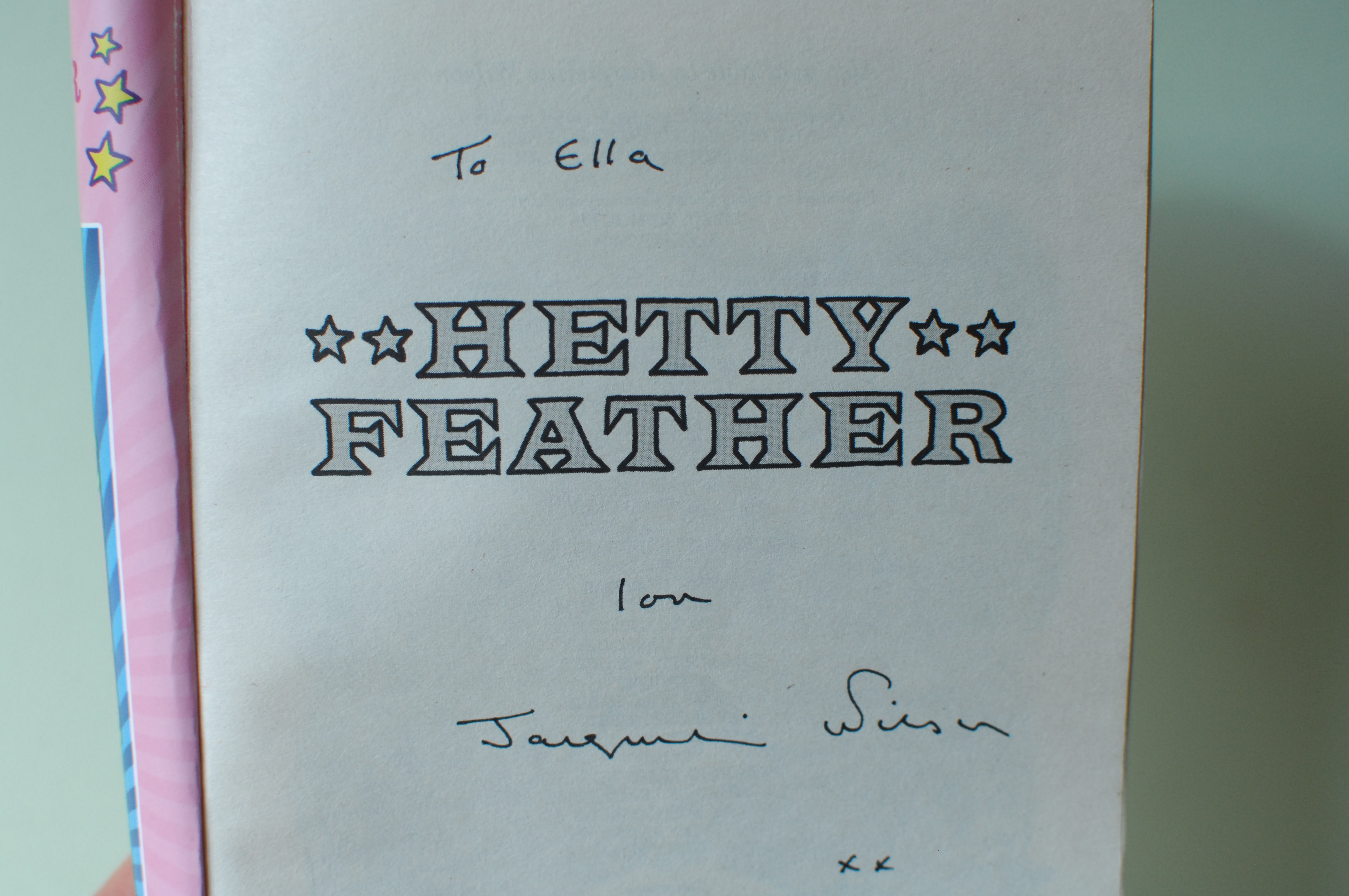 We had about half an hour to spare before the Family Workshop started, so we took the opportunity to look around the rest of The Foundling Museum.  I wasn’t really sure what to expect and wasn’t sure how much interest my younger two would have in the exhibits, but actually it was really engaging.  I found the display of ‘tokens’ (little items given to the babies by their mother when they were left at the hospital – objects like pennies and charms and buttons) really quite moving, along with the names of the first 3000 babies who were left at the hospital.  Each child who stayed there was given a new name when they arrived, so amongst the list was a Julius Caesar and a Robin Hood!  There were interactive ipads as well, which the girls enjoyed using as it brought the displays to life a little bit for them.  Upstairs we saw the Court Room (an impressive room containing many original artworks by artists who donated their pieces to the Hospital) and the Music Room, where Handel’s original manuscript for his ‘Messiah’ was on display.  That was pretty cool to see – when I was in primary school I sang with a choir group and I took part in a performance of Handel’s Messiah at our local church, so it brought back lots of memories for me.  Mimi and Lola liked sitting in the leather chairs with speakers in the headrests, choosing which piece of music they wanted to listen to and deciding which was their favourite. 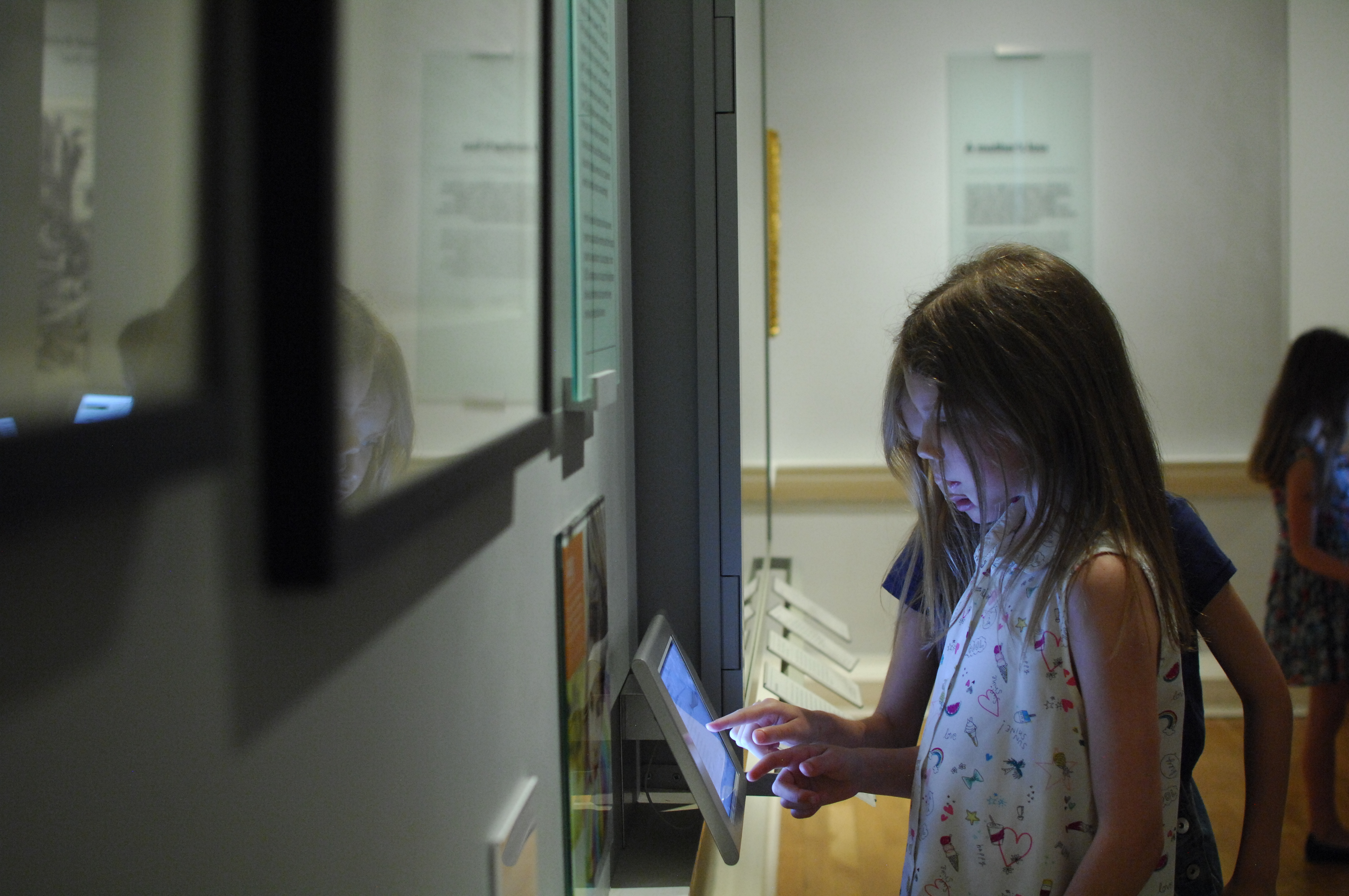 Exploring the rest of The Foundling Museum 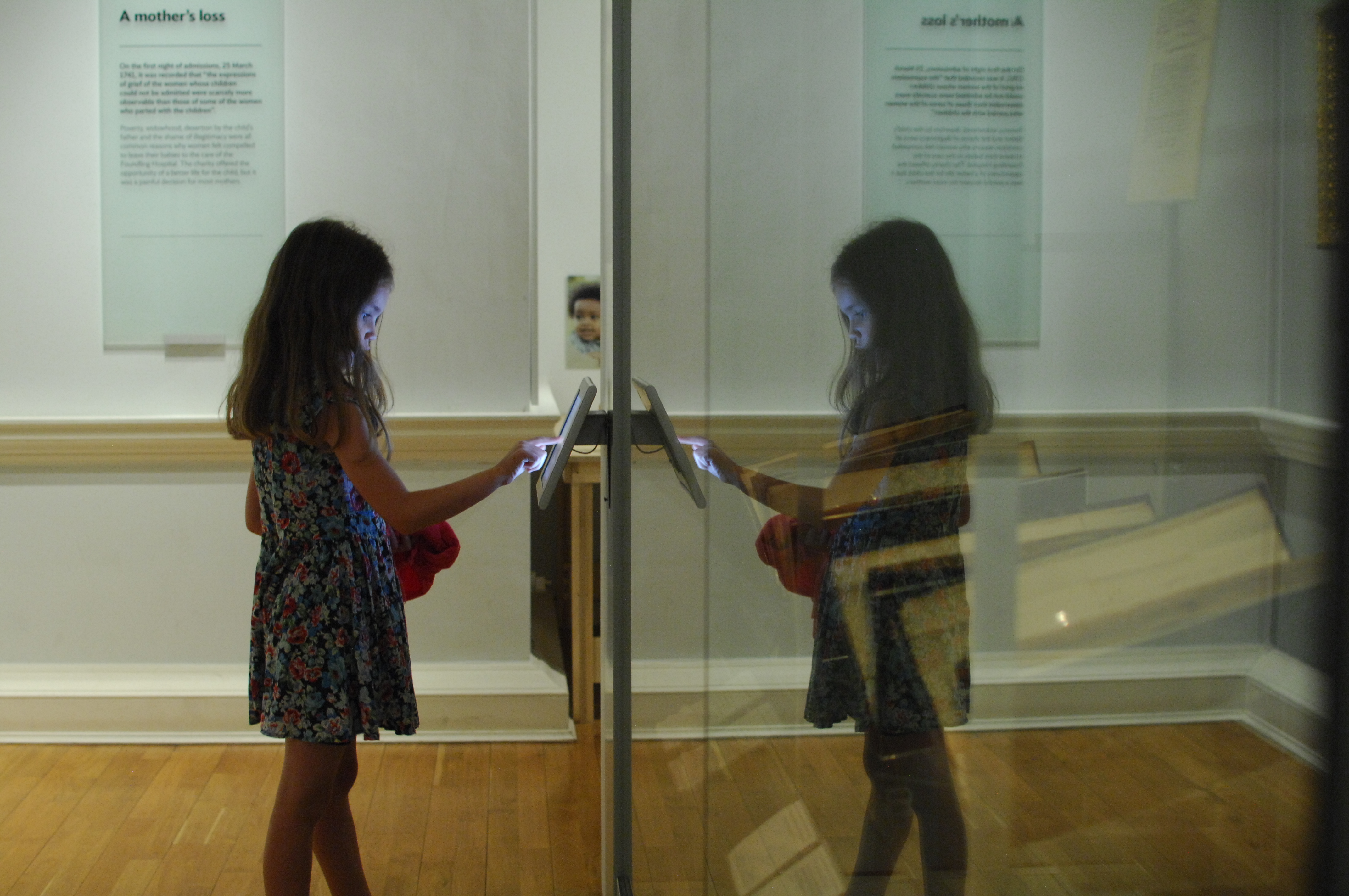 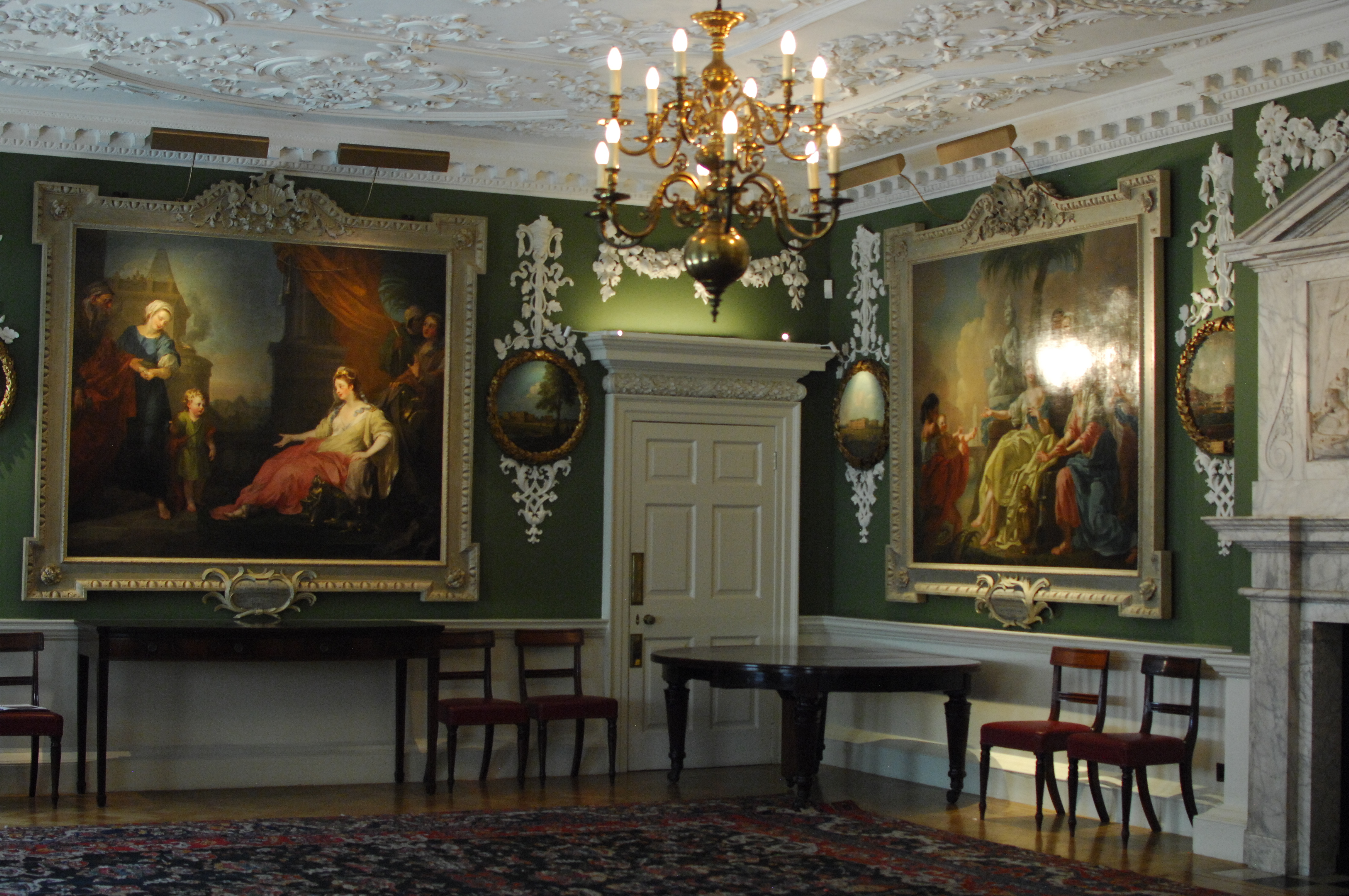 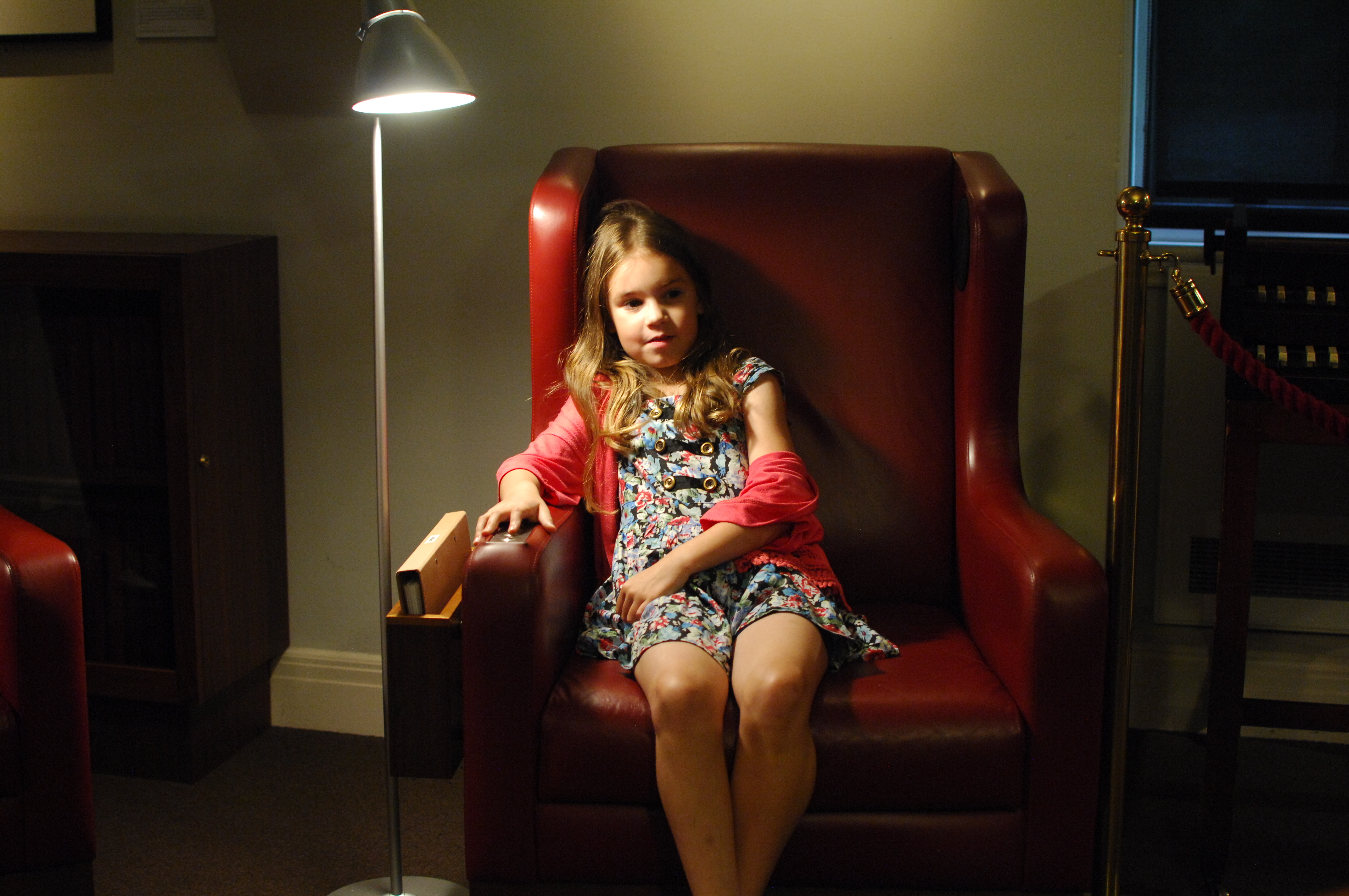 We had time for a quick visit to the gift shop to buy Ella some souveniers before heading to the first Family Workshop of the summer season, an introduction to bookbinding.  Lola had had enough by this point, so only Ella and Mimi took part.  They made marbled paper covers for a little concertina notebook and thoroughly enjoyed doing it.  It was very busy – I think it was more popular than the organisers were expecting! 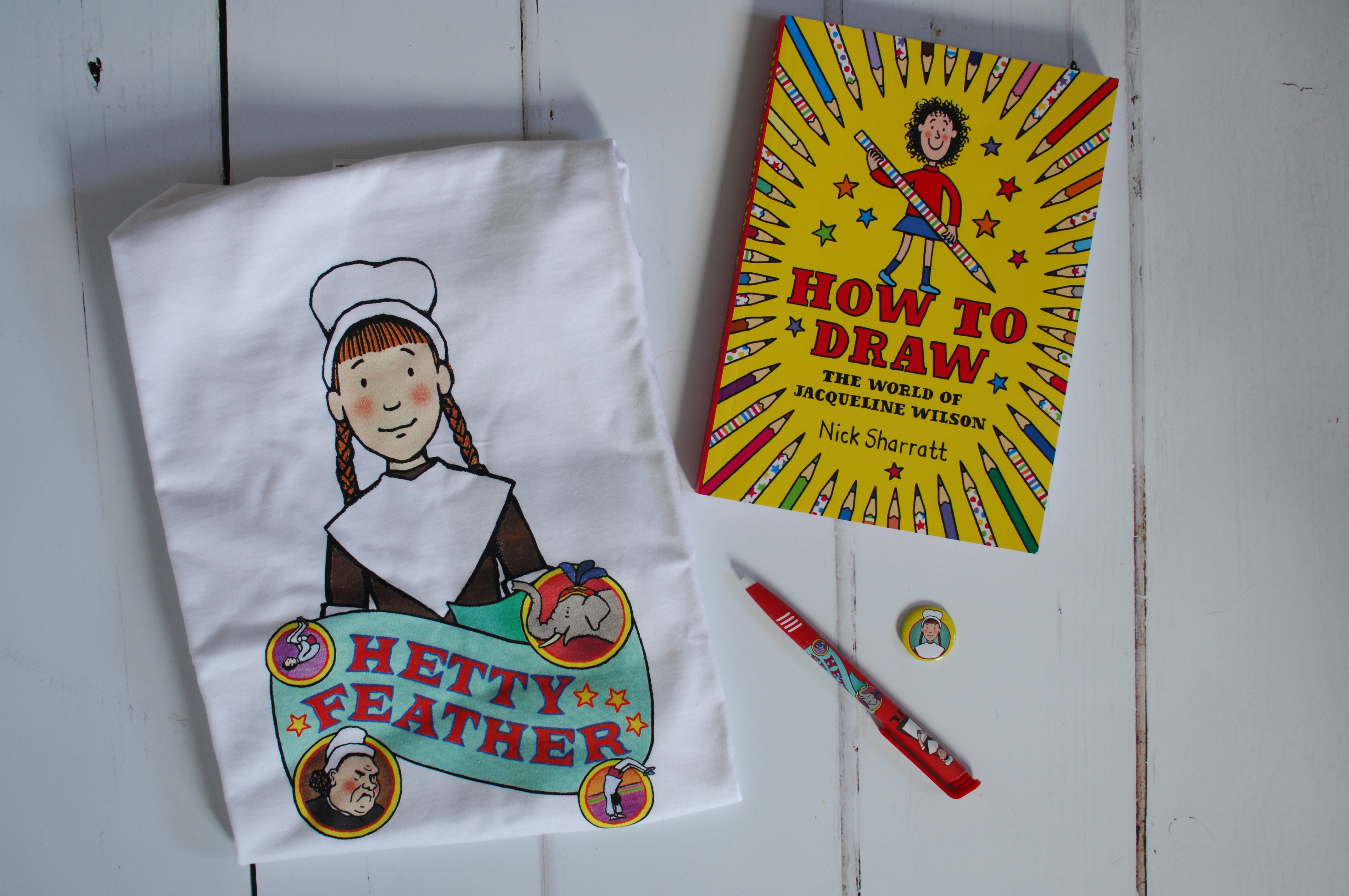 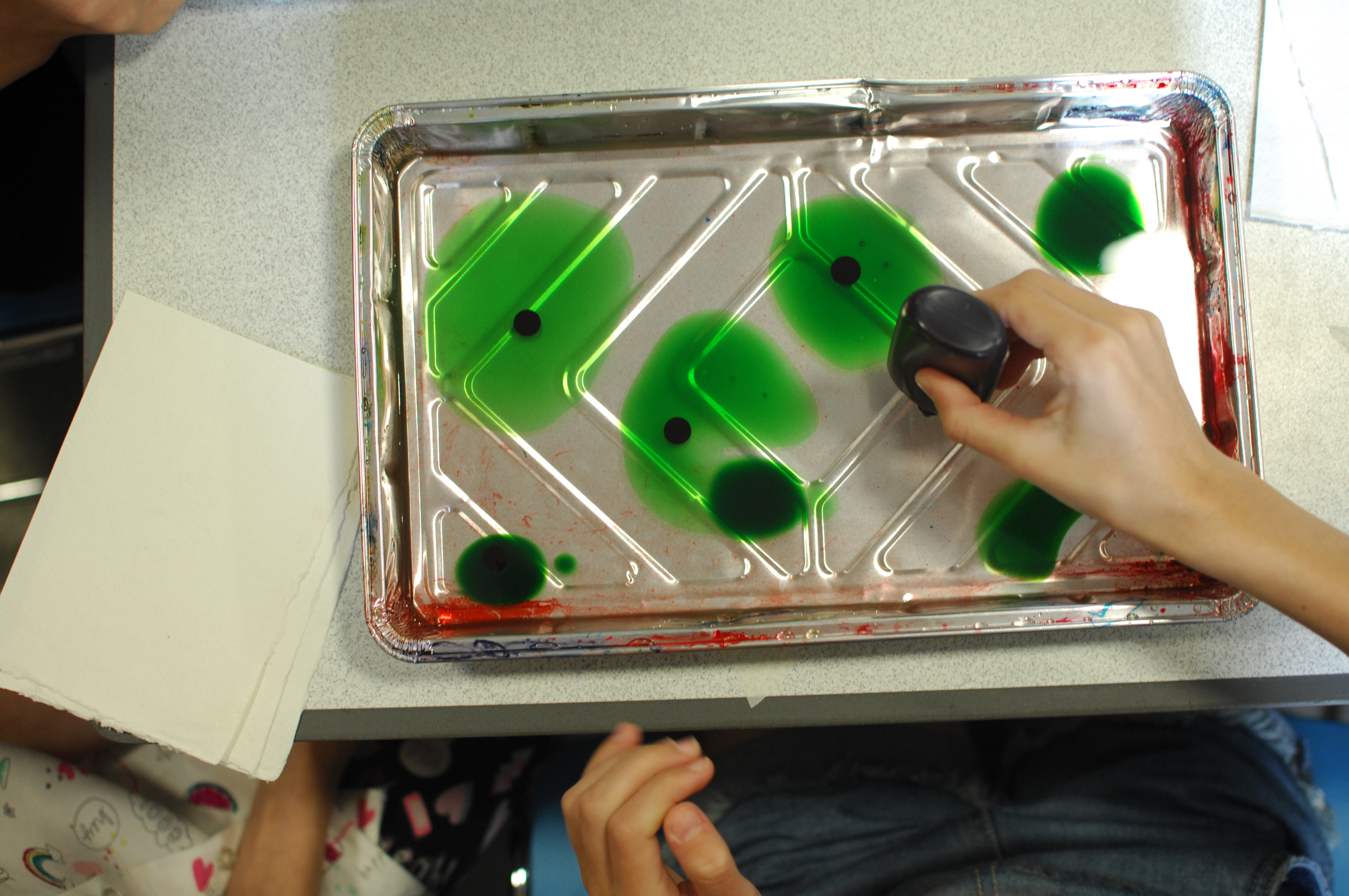 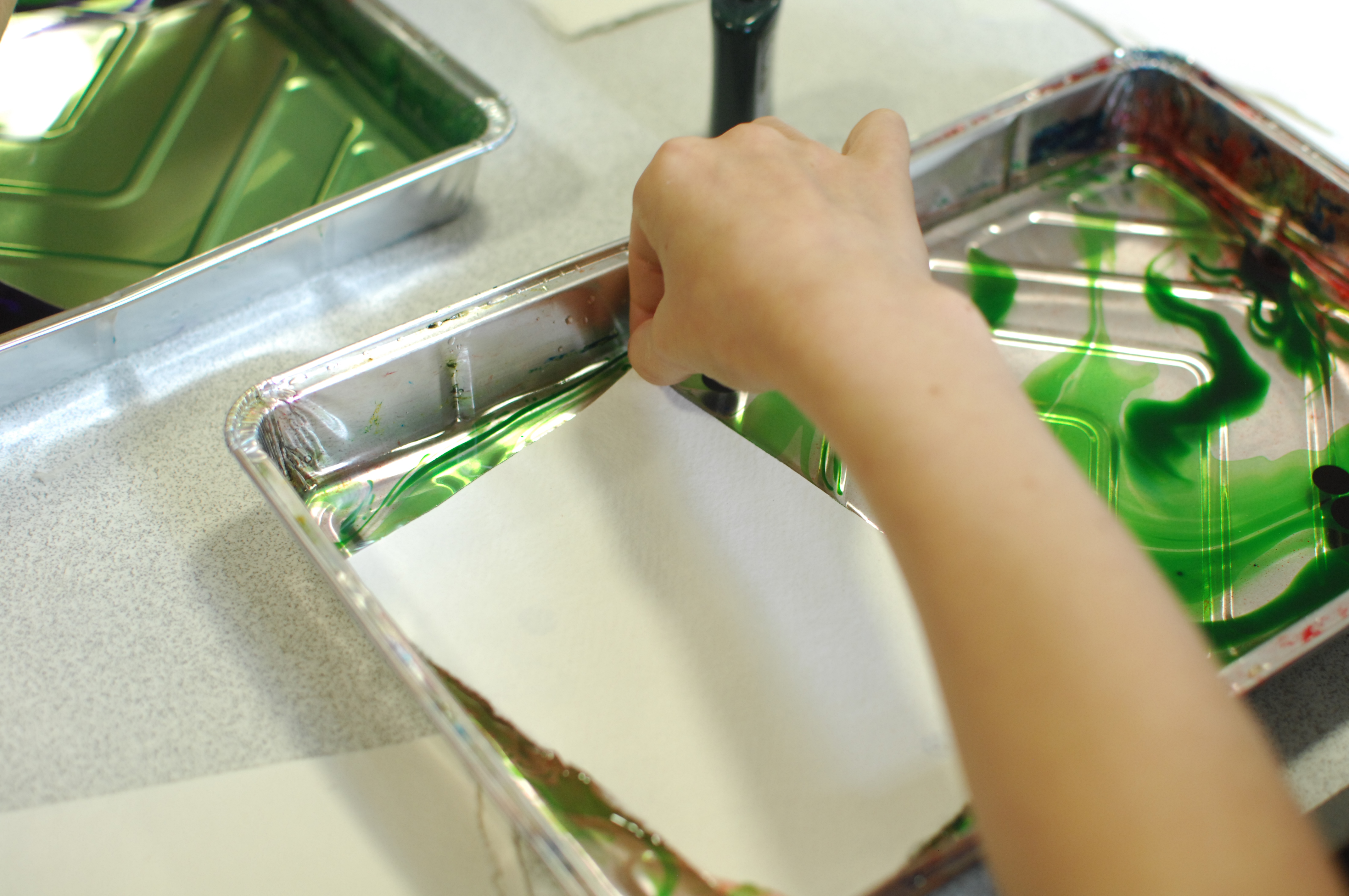 Making marbled covers for their notebooks at the family workshop

We had a thoroughly enjoyable day The Foundling Museum, and Ella’s dream came true when she got to meet Jacqueline Wilson.  There are lots more events on throughout the rest of the Summer and Autumn seasons at The Foundling Museum – you can find out more about them here.

Please note: We were invited to The Foundling Museum event as guests.  All opinions and images are my own.

Fun In The Sun At Trentham Gardens

June has been an absolutely beautiful month – full of sunshine and hot weather and fun adventures.  We’re very much on the countdown towards…