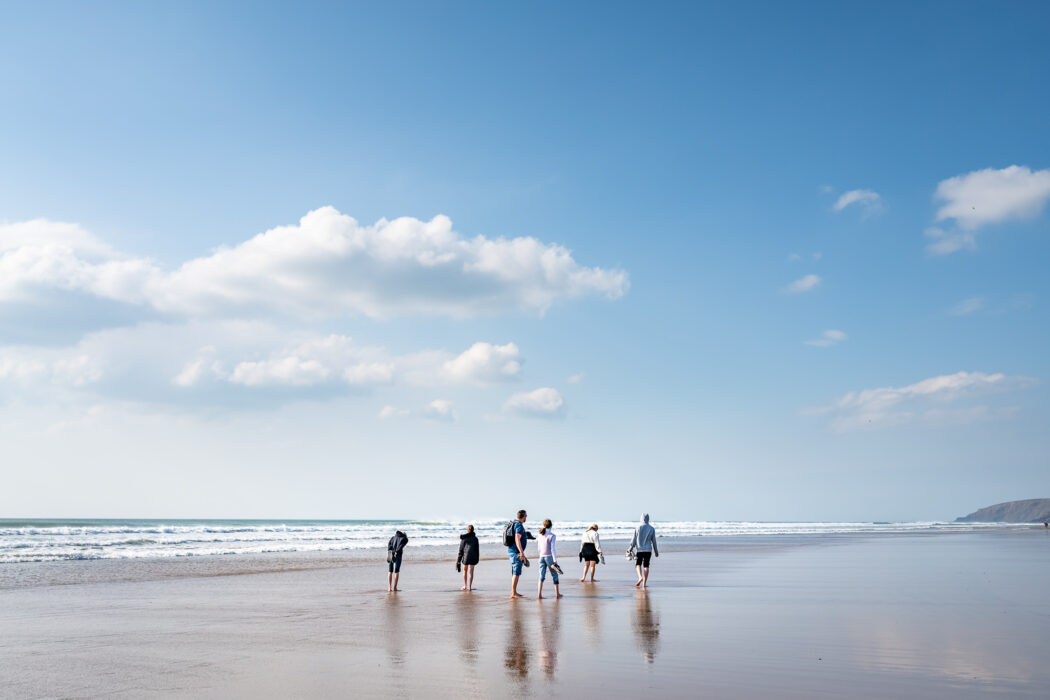 April has been a busy month!  I’ve spent a good portion of it travelling – up to Manchester for an evening, down to London for the day and a family holiday in Cornwall for a week during the Easter holidays.

Nothing makes me happier than being out and about doing stuff so although I’m utterly exhausted (because in between the travelling there has still been the usual ridiculously busy workload of therapy clients, school, life admin, appointments and various other things to deal with) it has been totally worth it and my head and heart are both full with all the good memories made and feelings experienced.

Legendary and Finale: After reading ‘Caraval’ by Stephanie Garber last month, I bought books two and three (‘Legendary’ and ‘Finale’) from the trilogy as well because I had to know how the story ended.  I finished the third one whilst we were on holiday in Cornwall.

It was, for me, perhaps a slightly anticlimactic, although still satisfying, final couple of chapters.  Overall I thoroughly enjoyed the series.  Each book kept me wondering what would happen next, and the delightfully detailed descriptions pulled me in visually – I think they would make a great TV show or film series.  Highly recommend if you’re looking for fairly easy-to-read escapism, a decent dose of magic and a little bit of light-hearted romance. 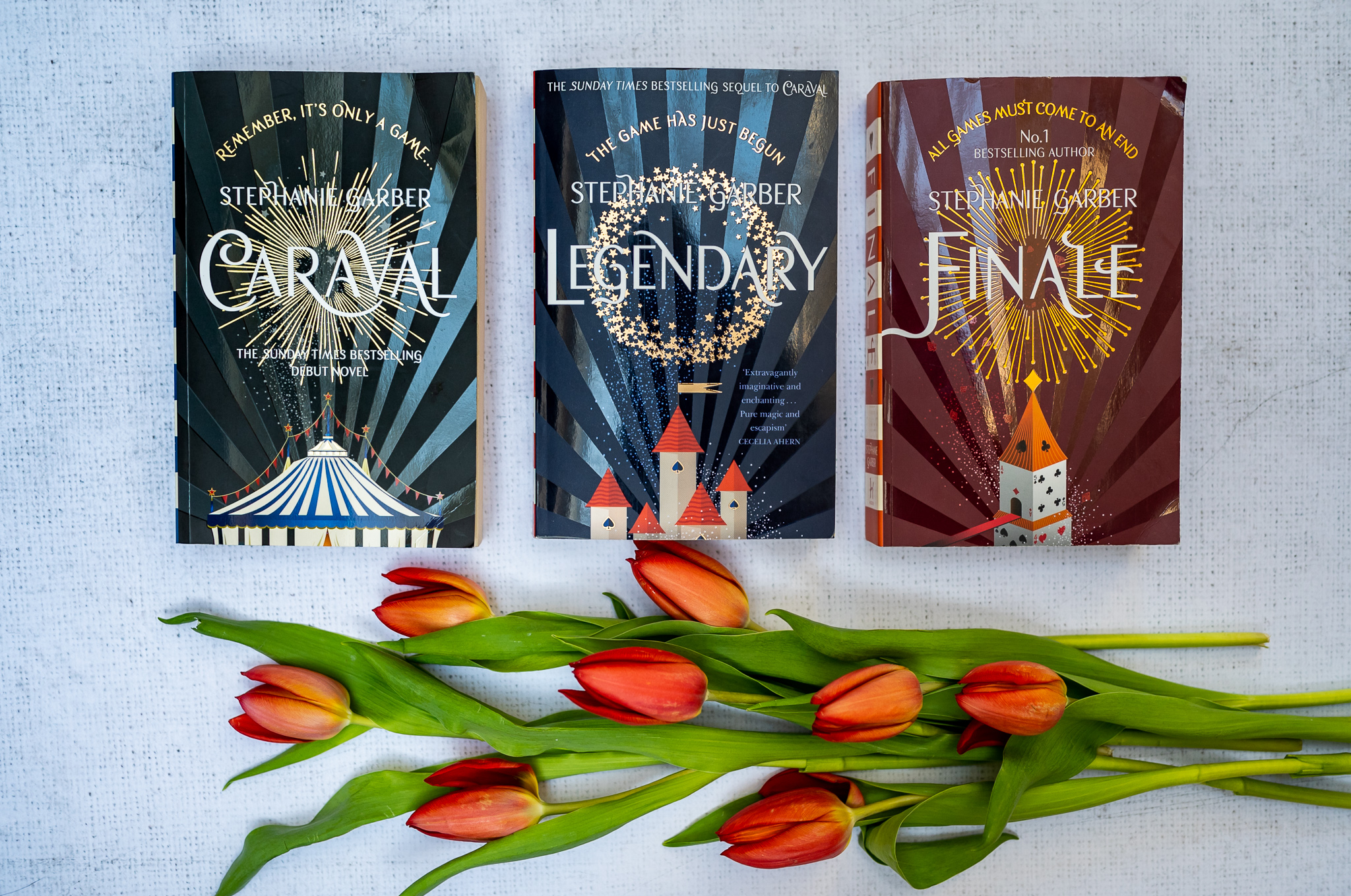 The ‘Caraval’ trilogy by Stephanie Garber

The Secrets Of Dumbledore:  Neil and I had a cheeky daytime date (at 10am on a Sunday morning!) to see ‘Fantastic Beasts 3: The Secrets Of Dumbledore’ at the cinema at the start of the month.  We both thoroughly enjoyed it – and I stayed awake the whole way through which is always a good indicator for how good a film is in my world.

It felt like a little bit of a placeholder movie, almost a transition to bridge the gap and fill in missing bits of the story between the second film (‘The Crimes Of Grindelwald’) and whatever title is coming next, rather than a standalone film in it’s own right but that’s ok – I think in a long series like this it’s necessary to have that sometimes.  Learning more about each of the characters and their backgrounds is what really gives a film it’s star rating for me.  And I loved the dancing crabs scene, it properly made me laugh out loud – you’ll have to watch it yourself if you want to know more!

Sunsets:  There is something more than a little bit magic about Cornish sunsets.  We were lucky enough to have some fantastic ones while we were in Bude and the skies at home were pretty spectacular throughout the month as well.  Chasing sunsets is one of my favourite things to do – these are a couple of my favourites from our trip… 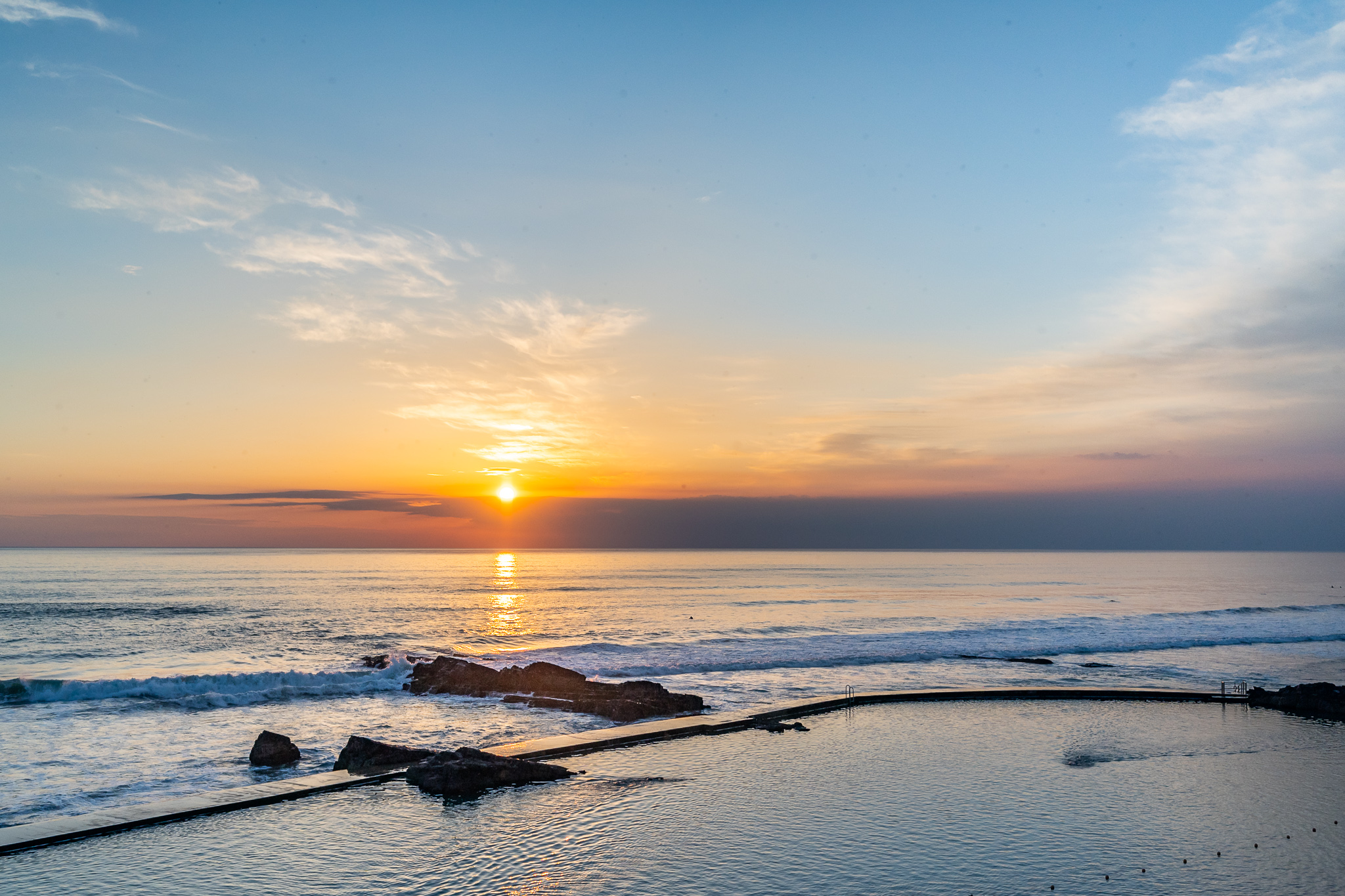 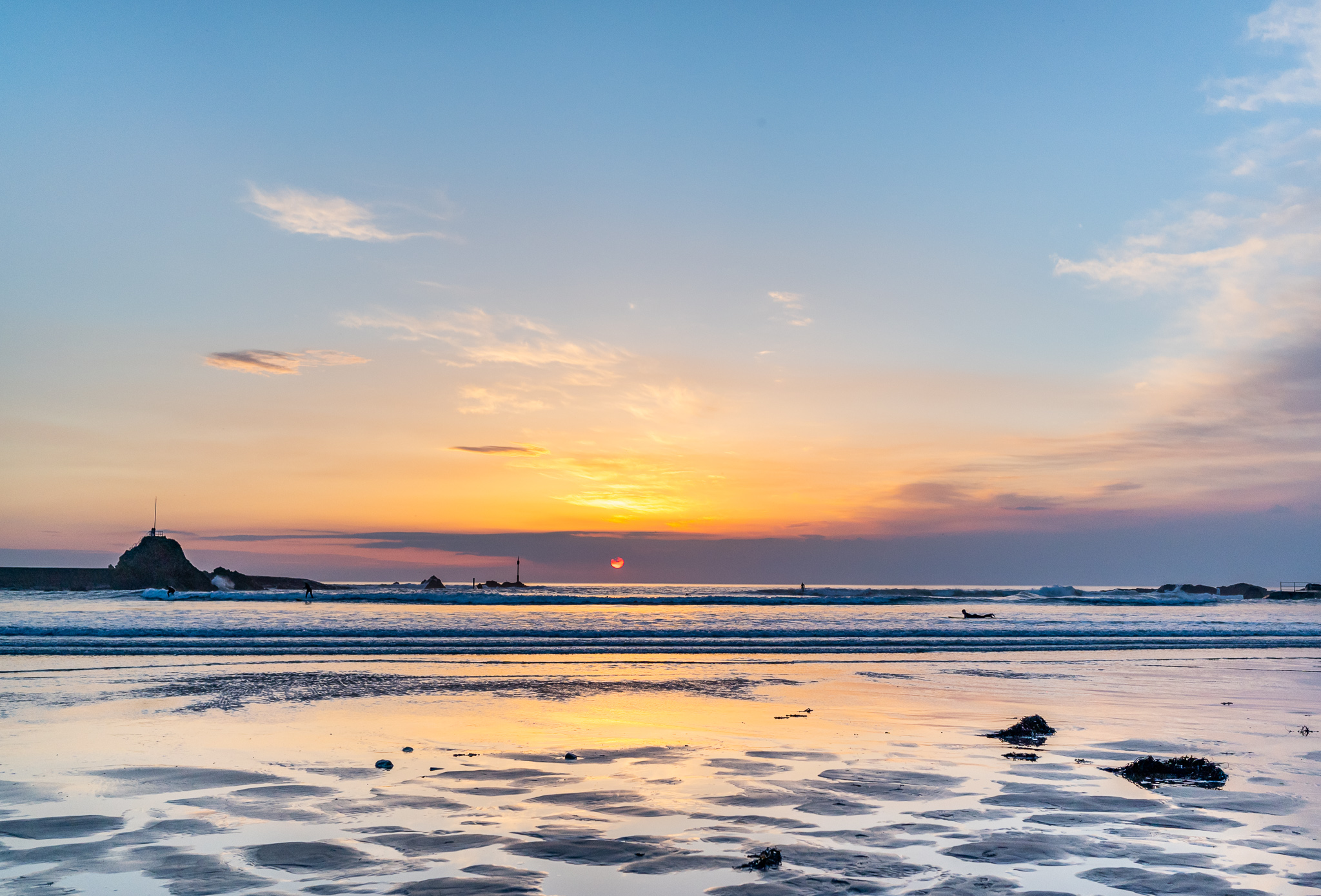 Olivie Blake:  The first mini-adventure of the month was an evening spent in Manchester with my eldest girl.  Ella loves all things book-related; spends all of her money on books; has a dedicated ‘bookstagram’ account on Instagram; and is always seeking out new things to read.  When she discovered that the author of one of her favourite books (Olivie Blake // ‘The Atlas Six’) was doing a mini tour of the UK, she begged to go.  I managed to get hold of tickets and we headed up north on the train on a random Monday evening during the Easter holidays.

There was an hour-long interview/conversation with the author which covered everything from her process of actually writing the book, to an in-depth analysis of each of the characters, to teasing hints about what might be coming in the next book in the series.  Afterwards she signed copies of the book and had a little chat with each person who attended the event (which was held at a beautiful – and huge! – Waterstones bookstore).  Ella also got to meet a couple of other bookstagrammers she’s followed for a while who were also there and it was the icing on the cake for her when that happened.  She didn’t stop smiling for the rest of the night.

It was so lovely to spend one-to-one time with her chatting about anything and everything and I’m really proud of her for being brave and doing something way outside of her usual comfort zone. 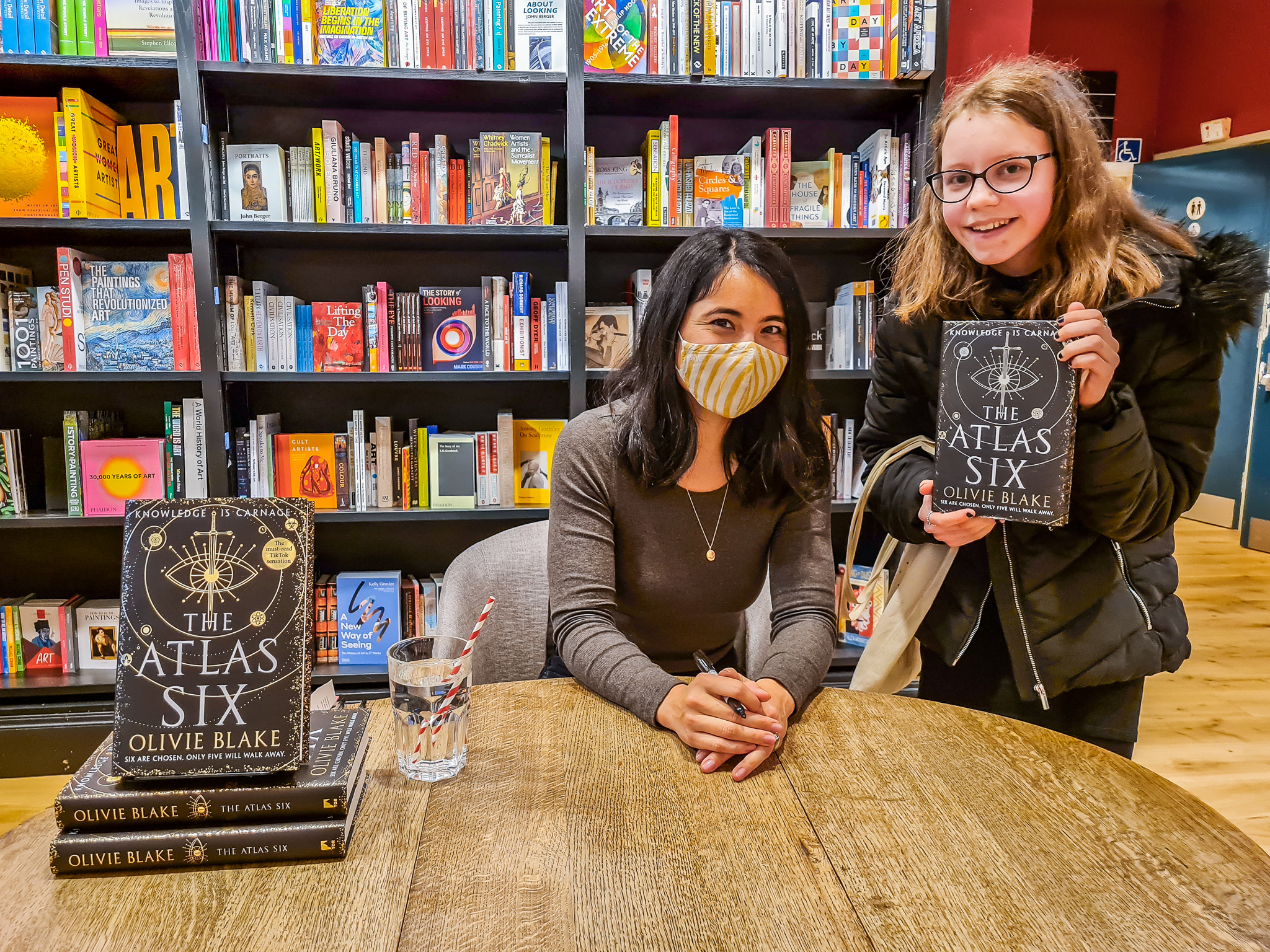 Ella after having her book signed by Olivie Blake, author of ‘The Atlas Six’

Day trip to London: The second mini-adventure of the month was getting to spend a solo day in London, also during the Easter holidays, just two days after being in Manchester with Ella.  I managed to squeeze in a visit to the National Covid Memorial Wall, which I’ve been wanting to see for a while now.  I knew it was a long wall of painted hearts on the south side of the River Thames but I wasn’t really sure what to expect.  It was actually really quite moving – there were so many names.  I found it incredibly thought-provoking and sobering to see it – it stretched on for what felt like forever.  I wasn’t able to walk the full length of it but I spent as much time as I could reading the messages that people had left about loved ones lost to Covid.  I’m glad I made the effort to get there. 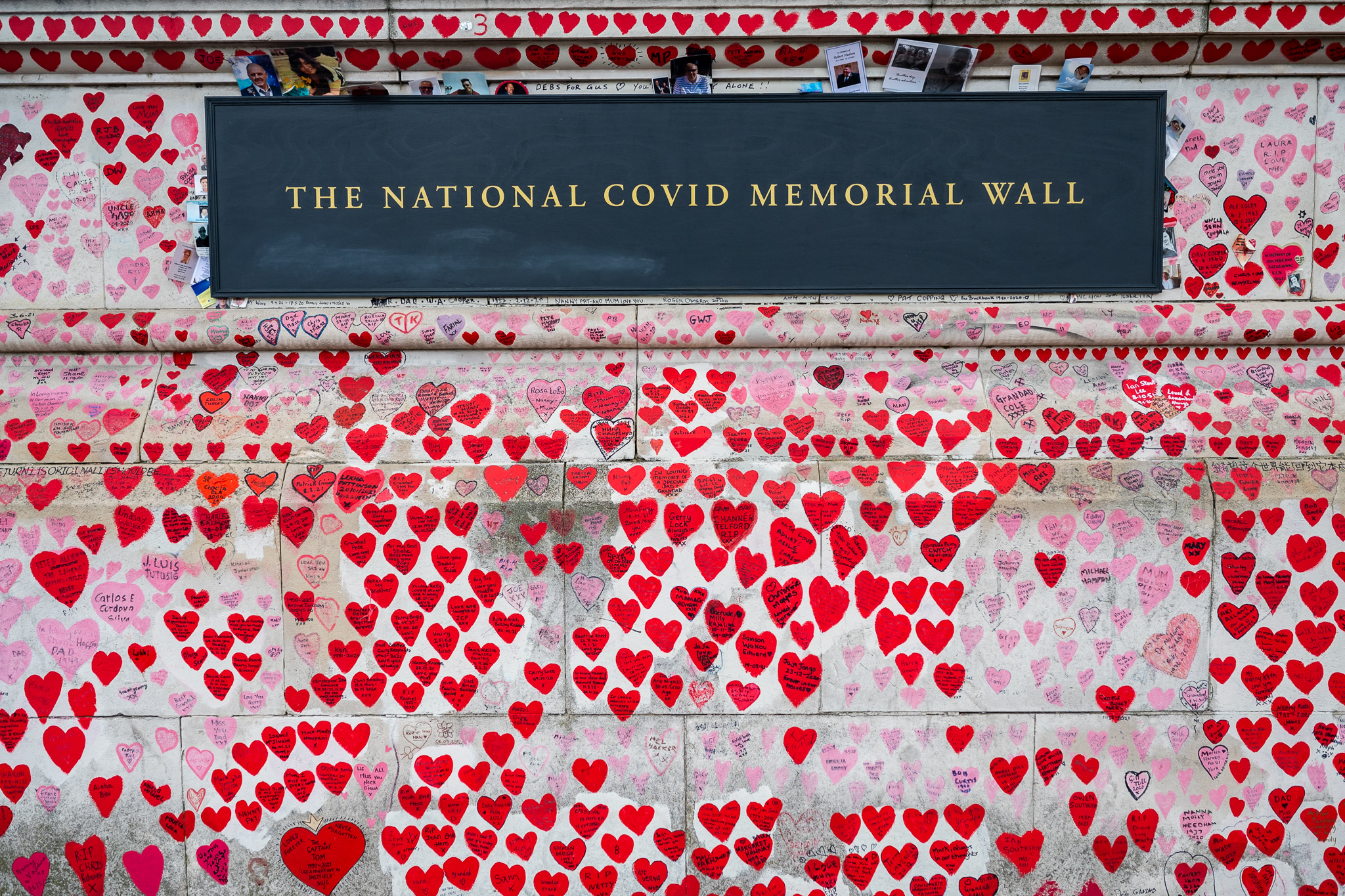 The first main purpose for my day-trip was to see a friend.  A travel-buddy of mine (we first met in New Zealand 18 years ago) who lives in Ireland was spending a few days in London with his family and as I hadn’t seen him in person for six years we arranged for me to go down and hang out with them for the morning.  It was SO good to see him, his partner and their son – we wandered through Covent Garden then sat in a coffee shop and chatted for a couple of hours, setting the world to rights and catching up on all of each others news.  We talk most days in messages on Instagram but there’s nothing like seeing people in person and being able to give them a hug.  Their little boy is gorgeous and confident and chatty – I last saw him when he was two years old so watching him now, aged 8, becoming such an awesome kid, was lovely.  Spending time with friends was exactly what I didn’t know I’d been needing – those two hours filled my soul up so much. 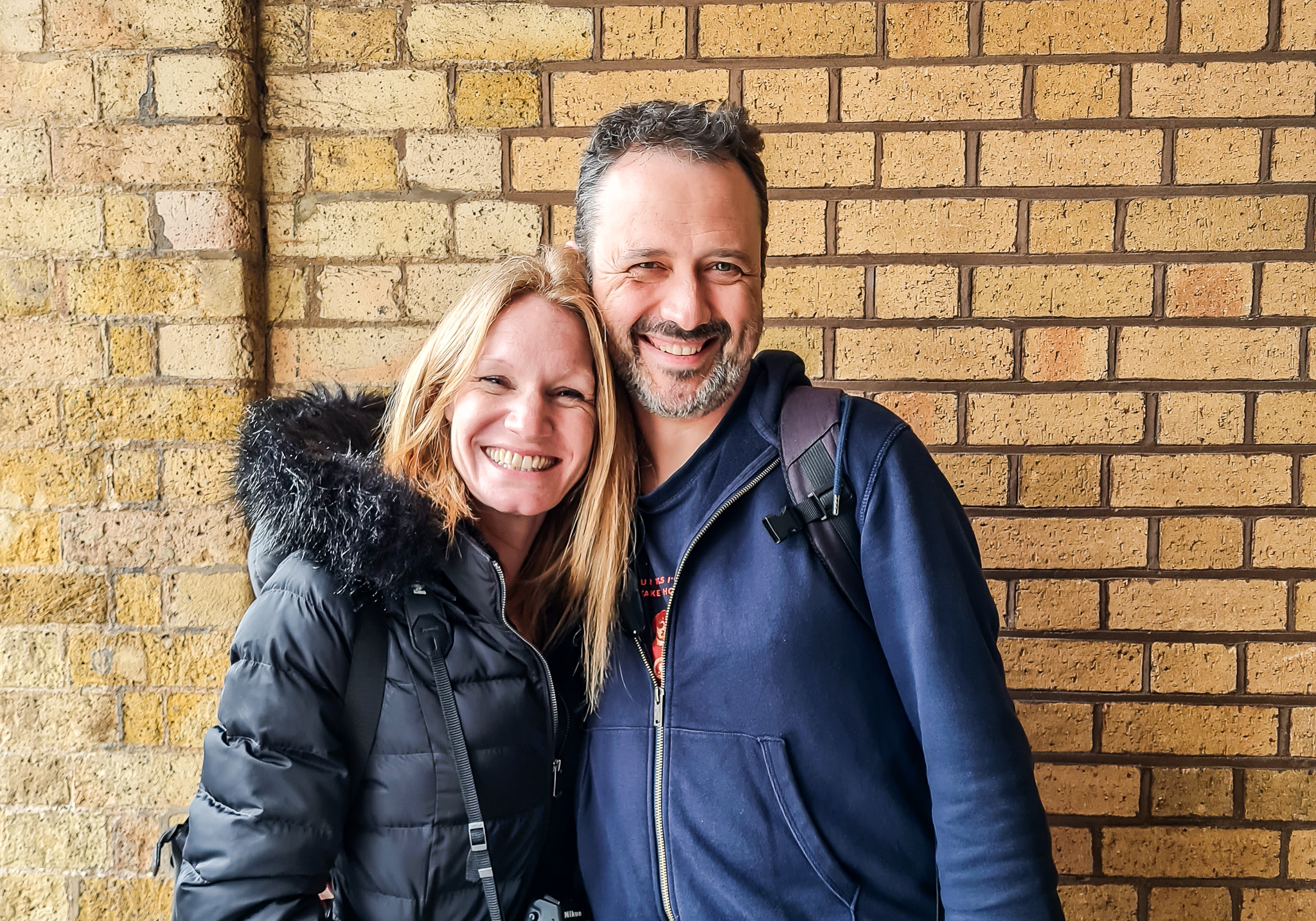 The second reason for my day in London was to see my wonderful Mum.  It had been her birthday a couple of days before and I wanted to spend some time with her.  We had lunch and a cuppa and then I took her to Sky Garden as a belated birthday treat.  I’ve been wanting to experience it for ages and I knew that she would love it too.  It was everything I’d hoped it would be.  We were really lucky to have a clear-sky day so the 360 degree views of London were incredible!  It’s such a unique concept and it still astonishes me that it’s completely free to visit – a must-do if you’re visiting London.  We loved it!  It was really good to spend some time with Mum just the two of us as well and I’m hoping to go down to London more often to do things like that with her. 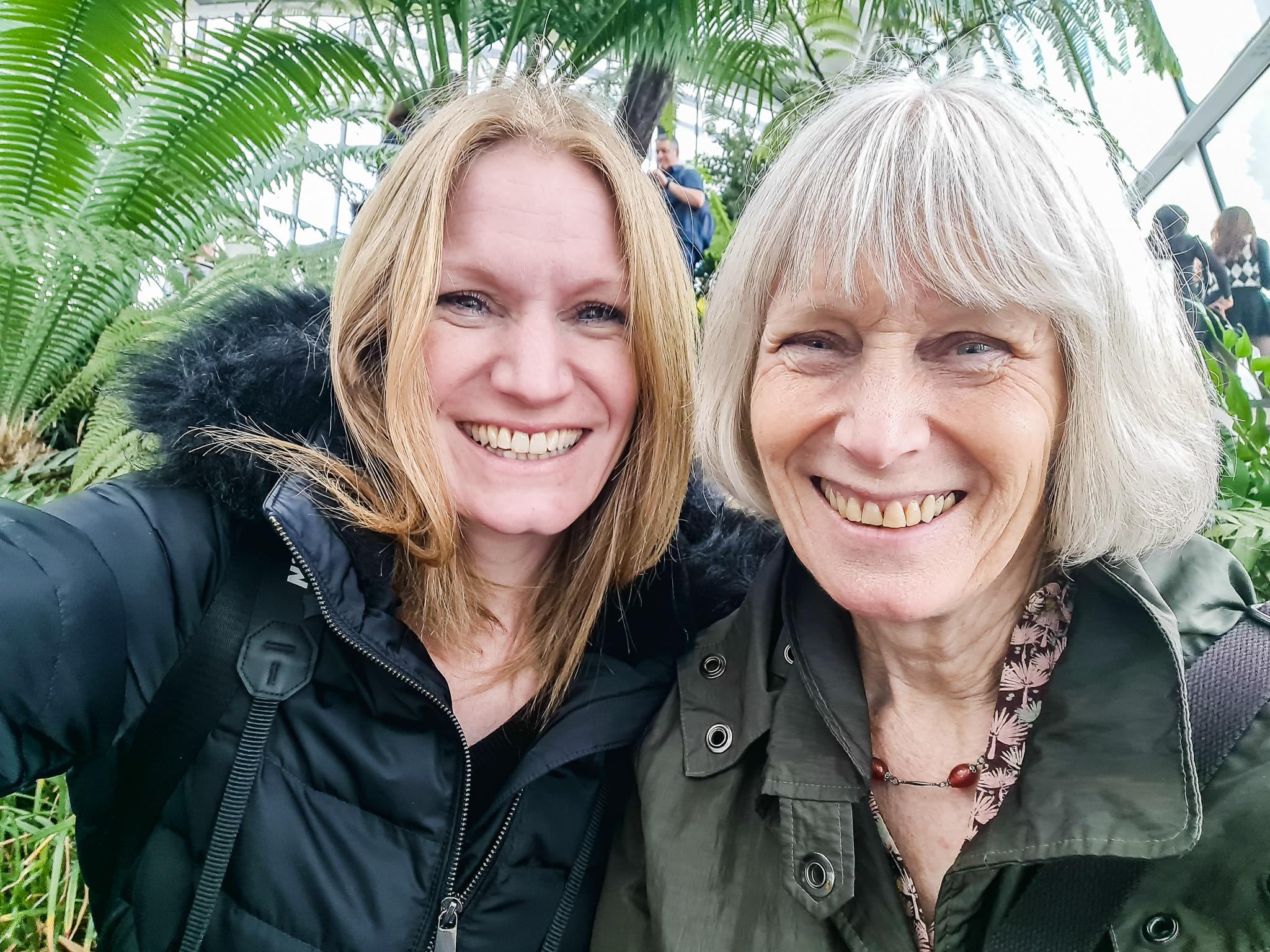 Me with my beautiful Mum at Sky Garden London 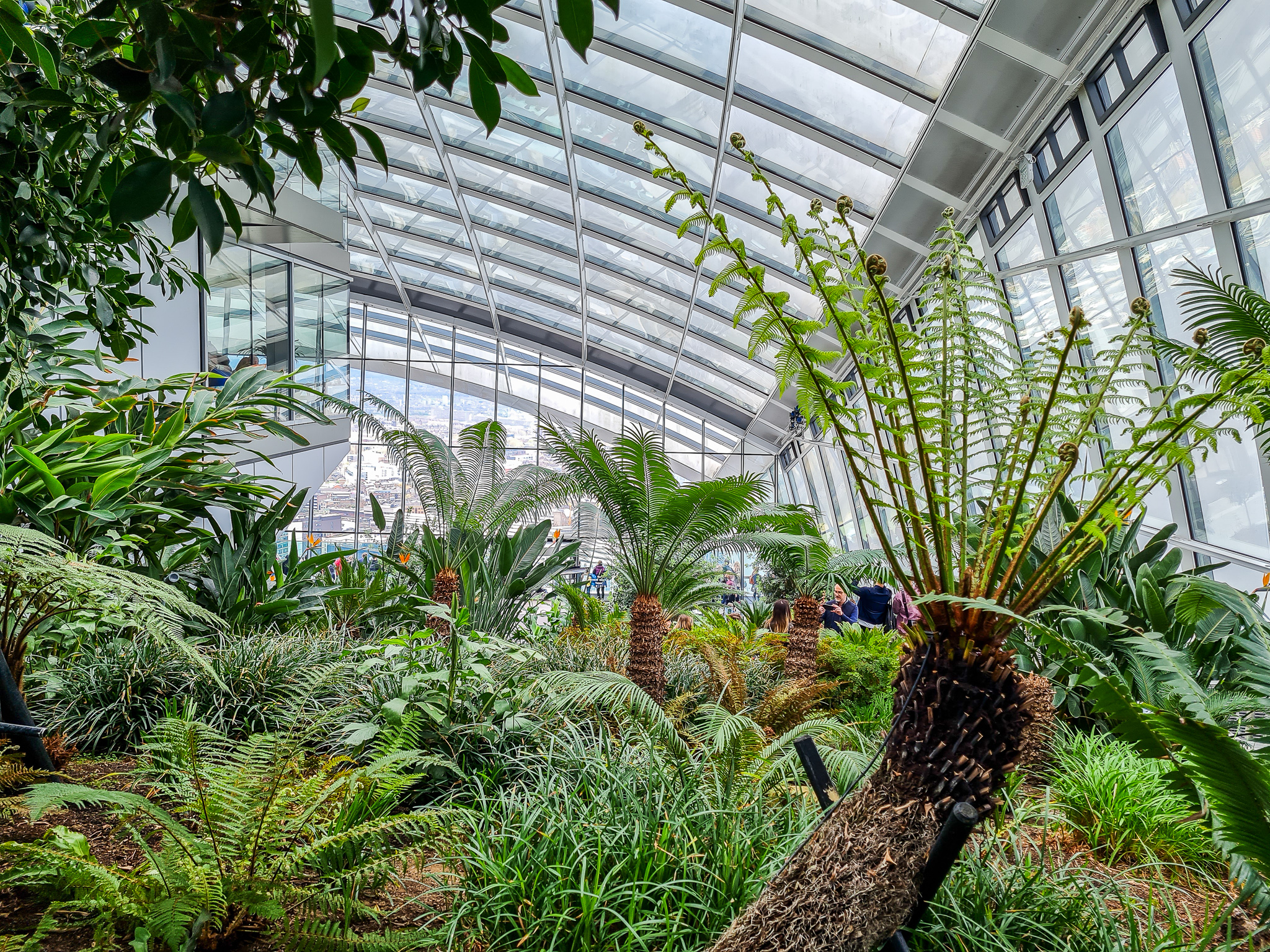 Bare feet:  I live in my faithful old boots, which are battered and worn down and much loved.  However, I was absolutely determined this year to go barefoot on the beach and paddle in the water.  This might not sound like much but I’m terrified of the sea (and really hate being cold) so it was actually quite a big deal for me.  We were lucky enough to have some beautiful, warm weather while we were in Cornwall so on the very last day, when we went to the beach to say goodbye to the sea as is our family tradition, I plucked up the courage and did it!  I’m so glad I did – it was absolutely freezing but lots of fun and 100% worth it. 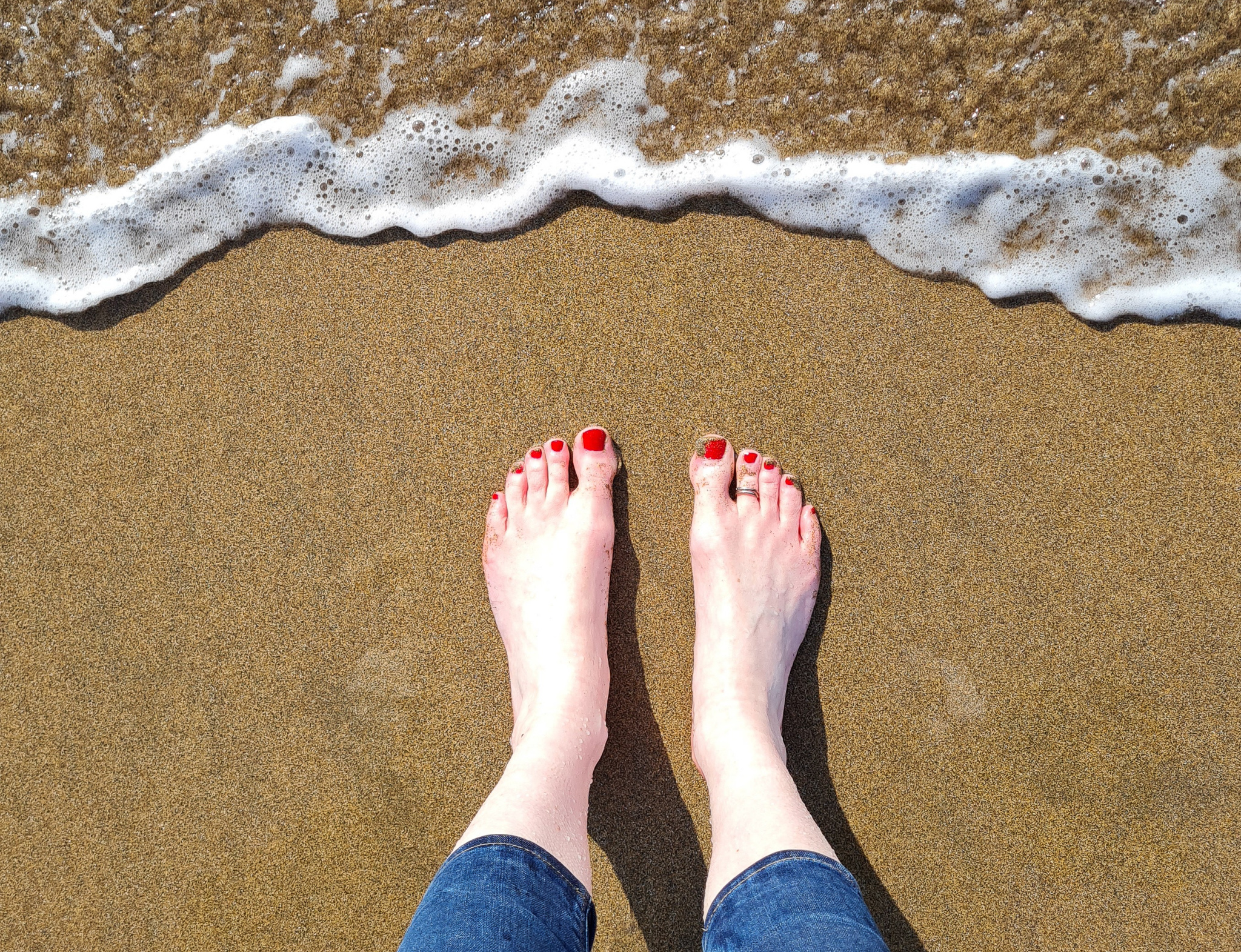 Barefoot on the beach in Bude

Cornwall:   We spent the second week of the Easter holidays in our happy place by the sea in Cornwall.  It was a trip of two halves – just the five of us for the first part of the week and then Sophie and her boyfriend Jack arrived to stay with us for the second half, which was lovely.  It definitely changed the dynamic and energy (in a good way) and we loved having them with us.  It’s so good that The Beach Haven, where we stay every year, has the space to accommodate us all.

We had a day visit from some of my family too, one of whom was over here visiting from America (where she usually lives).  We celebrated her 60th birthday with a big buffet and birthday cake.  I hadn’t seen them in person for almost four years so that was a really special thing to be able to do and I loved making a fuss of her.  The rest of our time in Bude was spent walking over the clifftops, playing cricket on the beach, eating ice creams and chasing sunsets and it was wonderful. 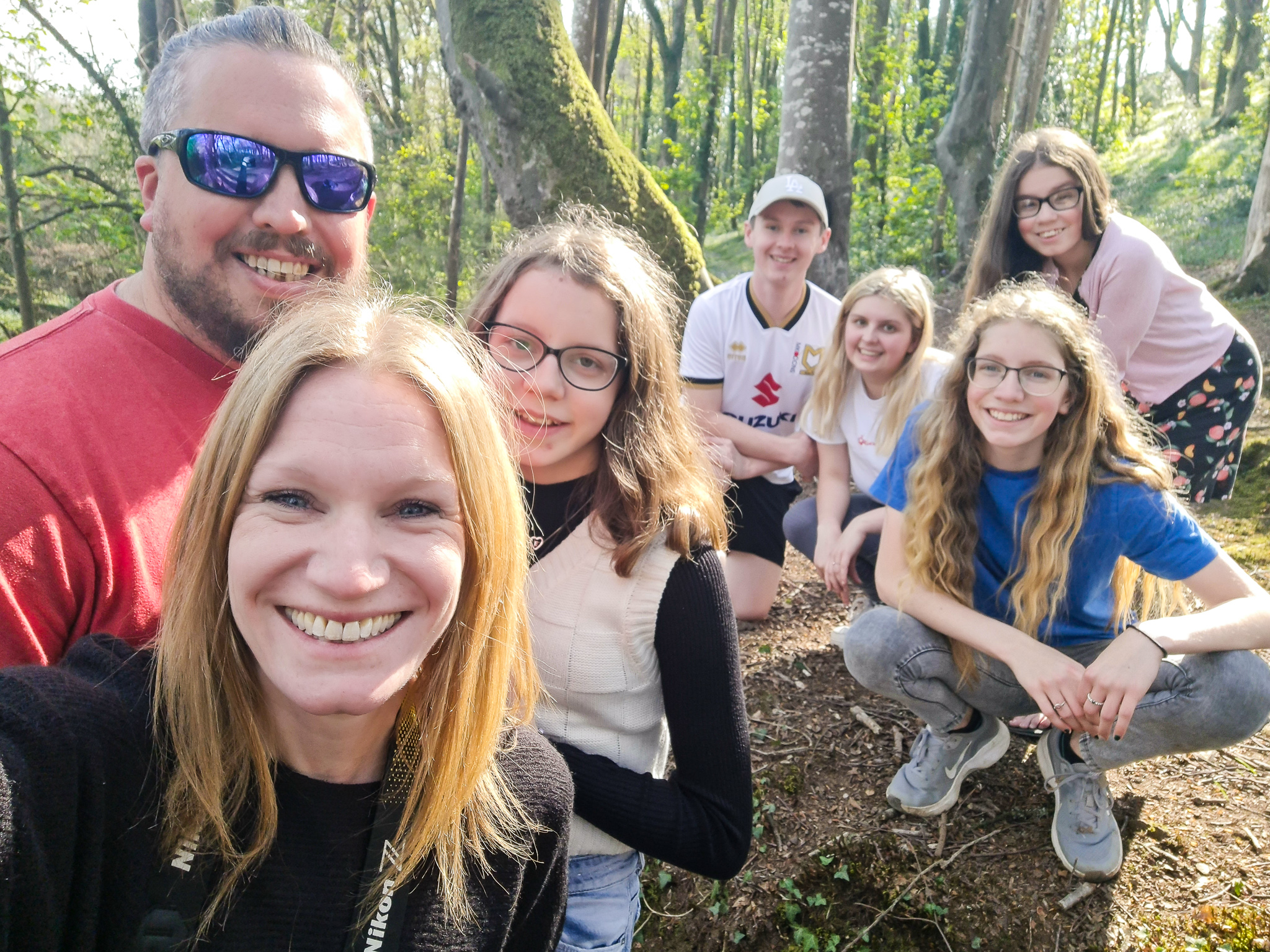 Exploring the bluebell woods near Bude 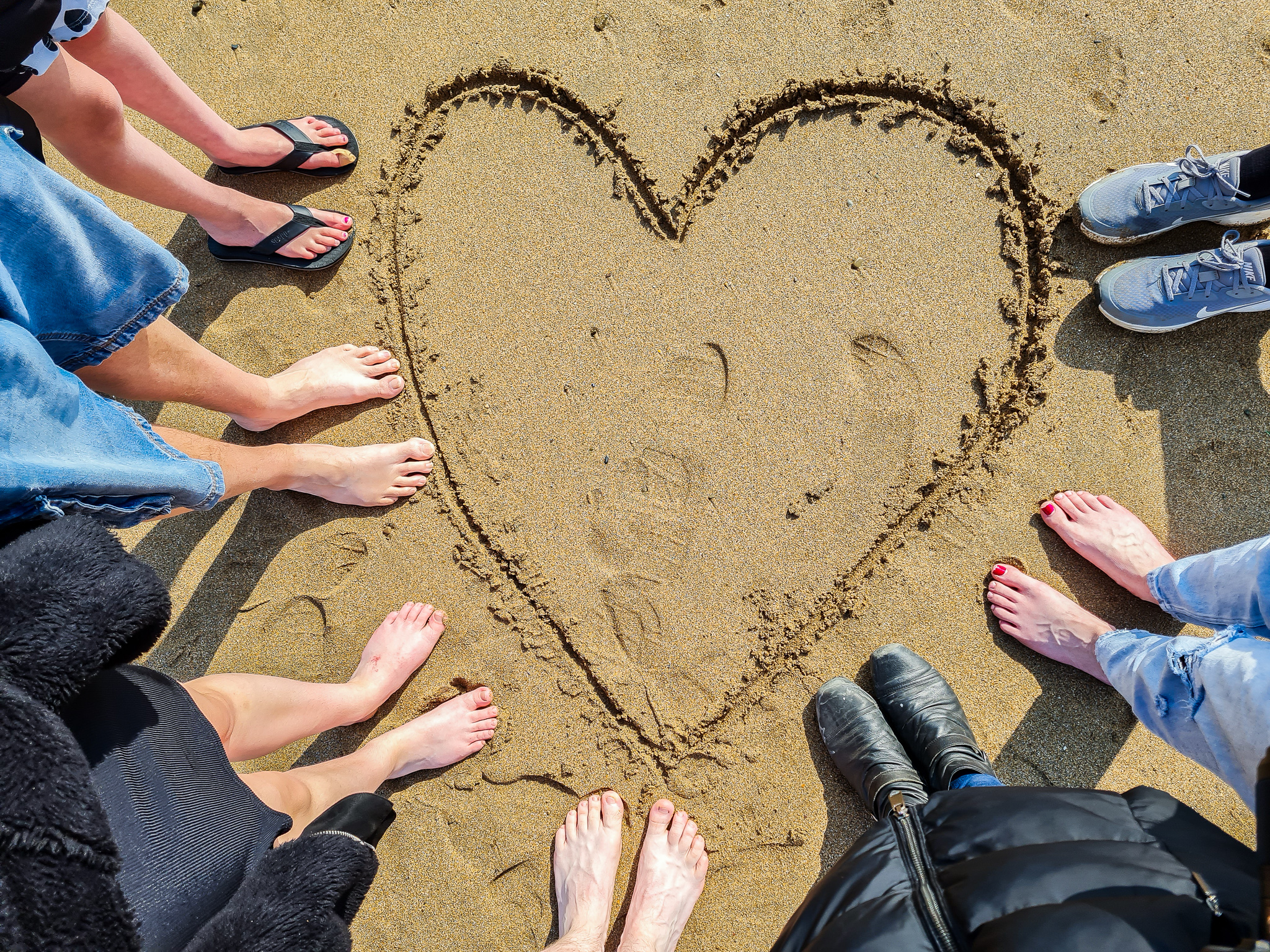 There were lots and lots of walks on the beach 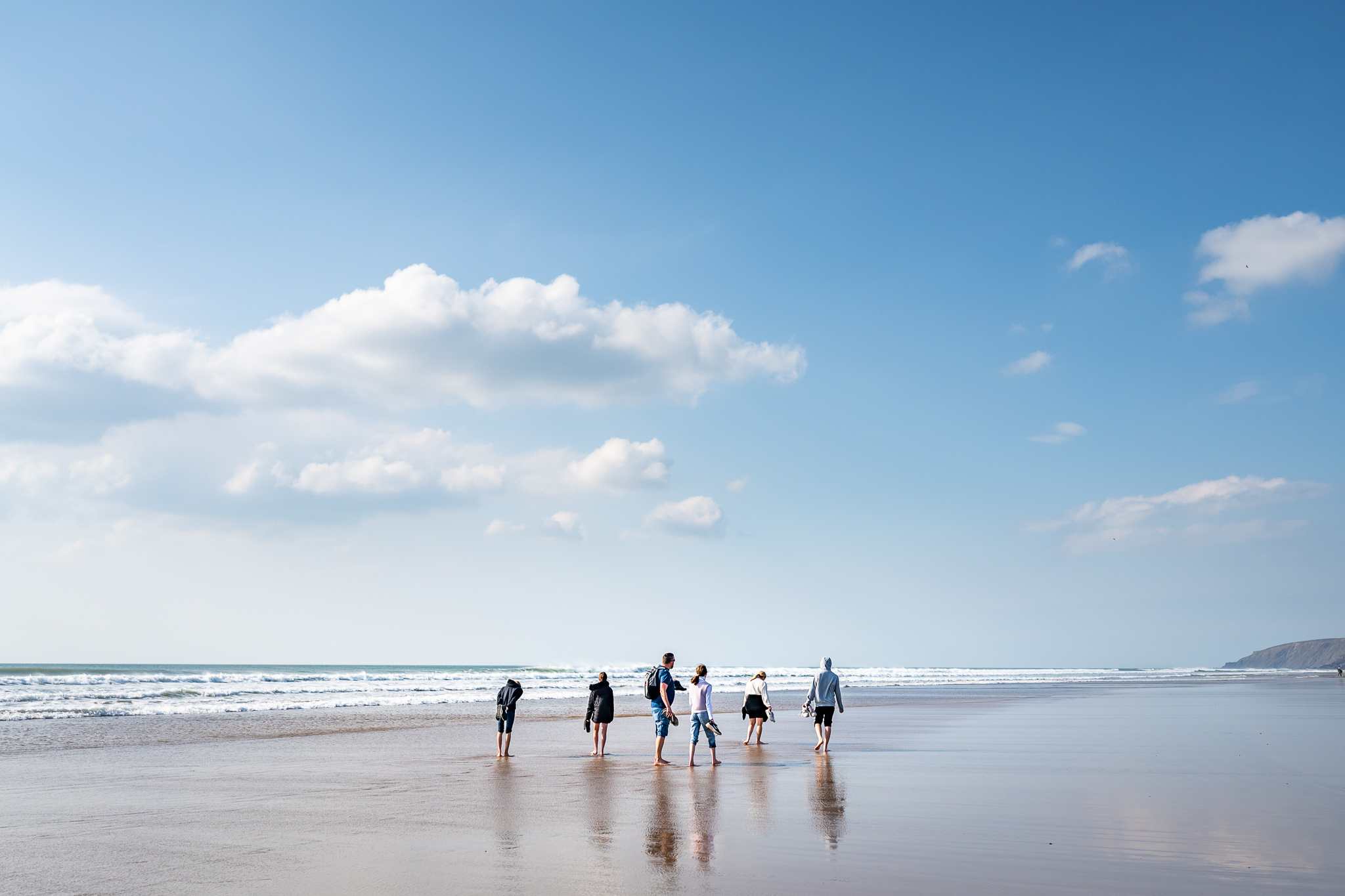 Out last day in Bude was pretty much perfection – an empty beach, blue sky memories made together

The fourth chapter of the year is now closed and we’re turning the page into late Spring.  Everything is starting to look greener, temperatures are slowly picking up, flowers are blooming and there are lots of things to look forward to in the coming month.  I’m especially glad it’s only a few short weeks until the next break from school – roll on half term!

I hope that you found plenty of little things to love throughout April and that May is full of good things and moments to remember.

April 2022: The Moments In Between

This installment of #projecthappy covers the end of one year and celebrates the start of a brand new one in the form of 2018….