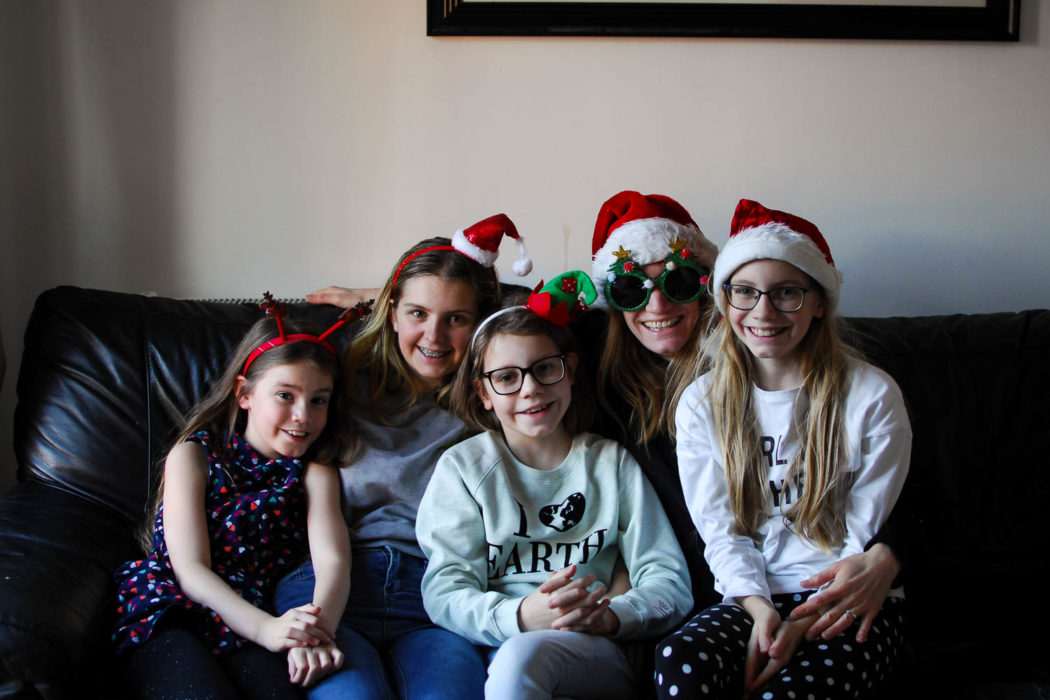 December has been the usual jam-packed and busy month of co-ordinating birthdays, school events and extra work alongside preparing for Christmas and making the magic happen.  It’s always chaotic, noisy, messy, more than a little bit stressful (and I don’t tend to sleep very much) but I honestly wouldn’t have it any other way.  There has been so much to love throughout this month and apart from the occasional overtired meltdown (from the girls and me!), it’s been a brilliant final chapter of the year.

I feel quite sad to say that I’ve not read a single page from any kind of book this month. Nothing!  I was, however, lucky enough to be given a few books for Christmas and I can’t wait to dive into them.  I’ve really struggled to know what to read recently and couldn’t get excited about anything I already had on my shelf so this new reading material is most welcome.

I loved the ‘His Dark Materials’ trilogy by Phillip Pullman when I first read them in my late teens and have been wanting to read ‘The Book of Dust’ (the prequel) for absolutely ages.  I’ve also been a big fan of Bill Bryson since I was a teenager too and have several of his books in my collection.  These two (‘Shakespeare’ and ‘Neither Here Nor There’) were missing and I’ve not read them before so I’m excited to be able to giggle along with his light-hearted ponderings about people and interesting observations on life again after such a long time.  It’s going to increase the intensity of my travel itch though I’m sure!  And finally, I’ve heard very good things about ‘Normal People’ and although I don’t know very much about the actual storyline, from what I can gather it sounds like just the thing I like to read. 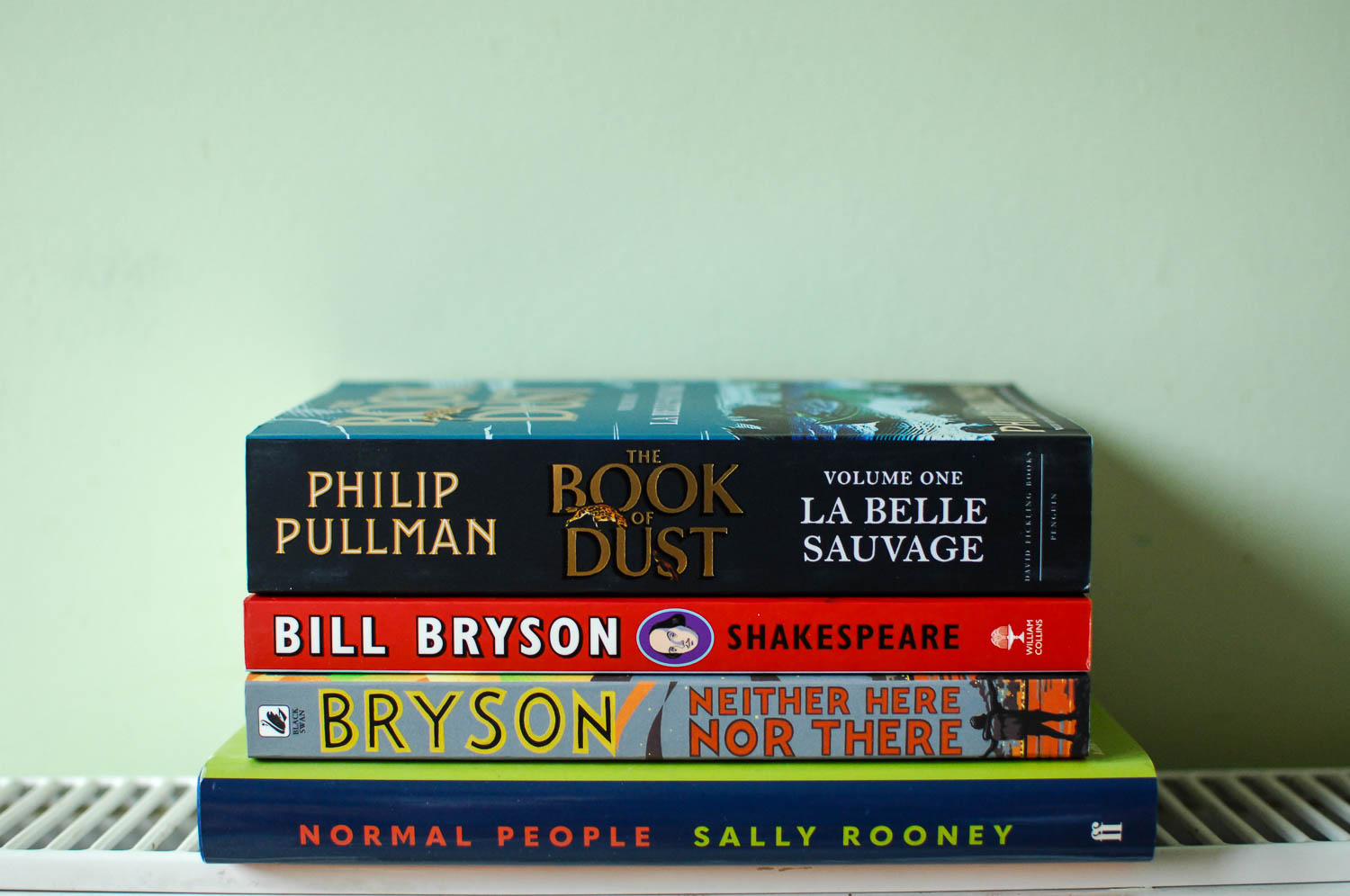 Since September Lola has been attending a Musical Theatre dance class on a Saturday morning and she absolutely loves it.  Singing and dancing are her favourite things to do, although she doesn’t like anyone watching her so I was really hoping this class might help her feel a bit more confident in front of an audience.  Twice a year the group enter a production called ‘Stafford’s Gotta Dance’ where dance groups from all over Staffordshire come together to showcase the performances they’ve been working on.  The first show took place a couple of weeks ago at a local high school and Lola’s dance group, who have been practising hard, performed a piece from High School Musical.  She was so nervous beforehand bless her, but once the music started she was fine, even with over 300 people watching her.  I’m so proud of her for going out there and doing it, even though she felt scared.  To me, that’s bravery.  The next show is in May and takes place at our local theatre.  I’m looking forward to it already! 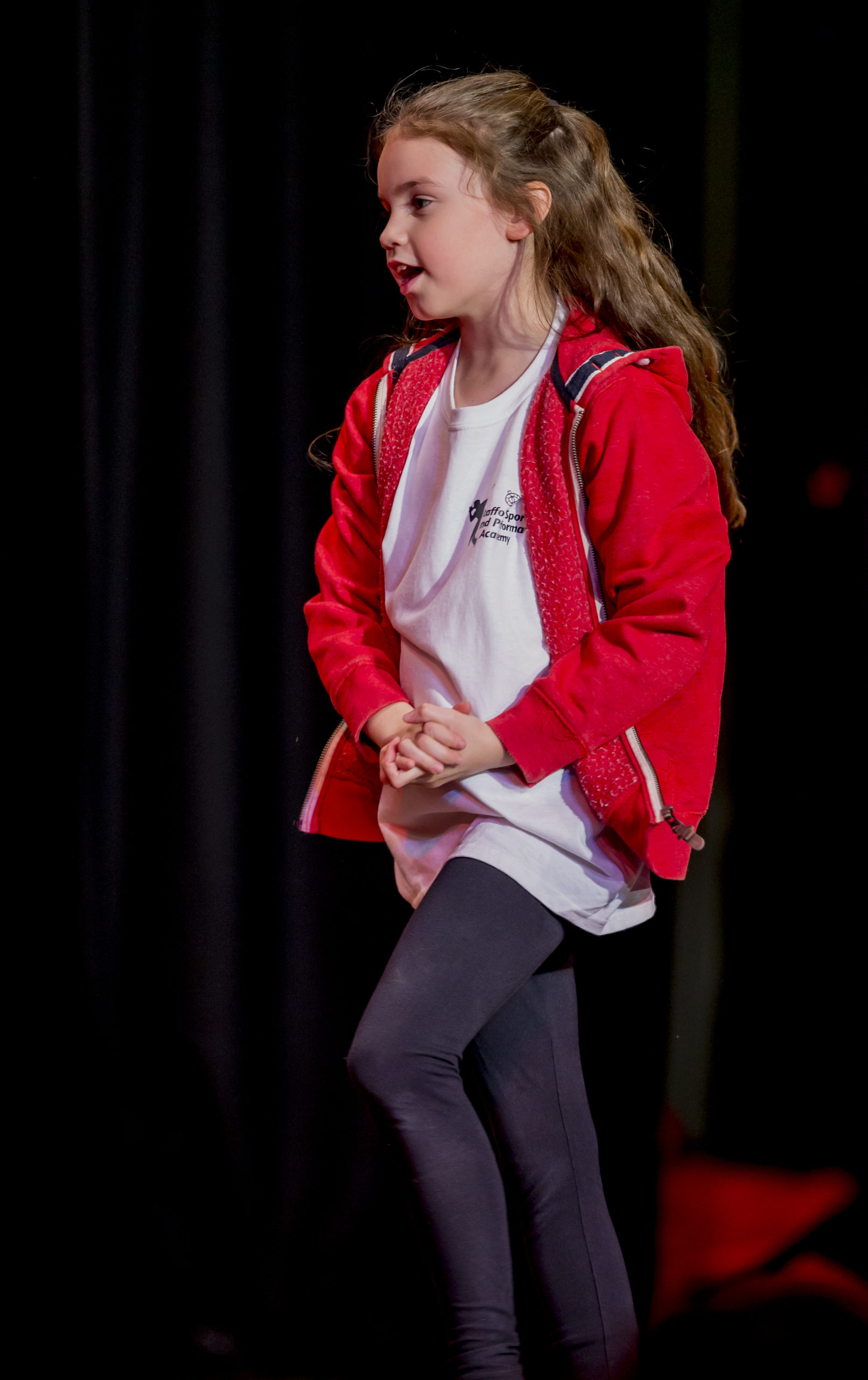 The husband and I managed to sneak in a trip to the cinema (no children, just the two of us!) as part of our date night for his birthday celebrations.  We’ve both been wanting to see ‘Fantastic Beasts: Crimes of Grindelwald’ ever since it came out and thankfully it was still on.  We’ve been without a cinema in our town for over a year since our old one closed down, so we were super excited to go to the brand new Odeon Luxe that finally opened at the start of the month – oh my goodness it was amazing!  The film was fab too and we’re already looking forward to seeing the third installment next year.

December wouldn’t be complete without a visit to the Pantomime! We started this new tradition last year and it’s definitely becoming a favourite family outing for the Christmas holidays.  This year it was a performance of Dick Whittington and it was as funny and packed with innuendo as ever.  We clapped and sang along and joined in and laughed out loud and had a brilliant time.

Every year, for a few days only, the main church in our town hosts a Christmas Tree Festival and I love to visit and wander around, gazing at all the twinkly lights and decorated trees.  I’m not religious but I find churches so peaceful and calming.  There is usually a choir there singing Christmas songs and carols and this year Lola’s school choir had the opportunity to perform there on one of the afternoons.   Watching her stand there with a big grin on her face, singing her heart out alongside her schoolmates, filled me with pride.  A boy from her class sang a solo to ‘Walking in the Air’ and it was so beautiful and unexpected that it brought tears to my eyes. 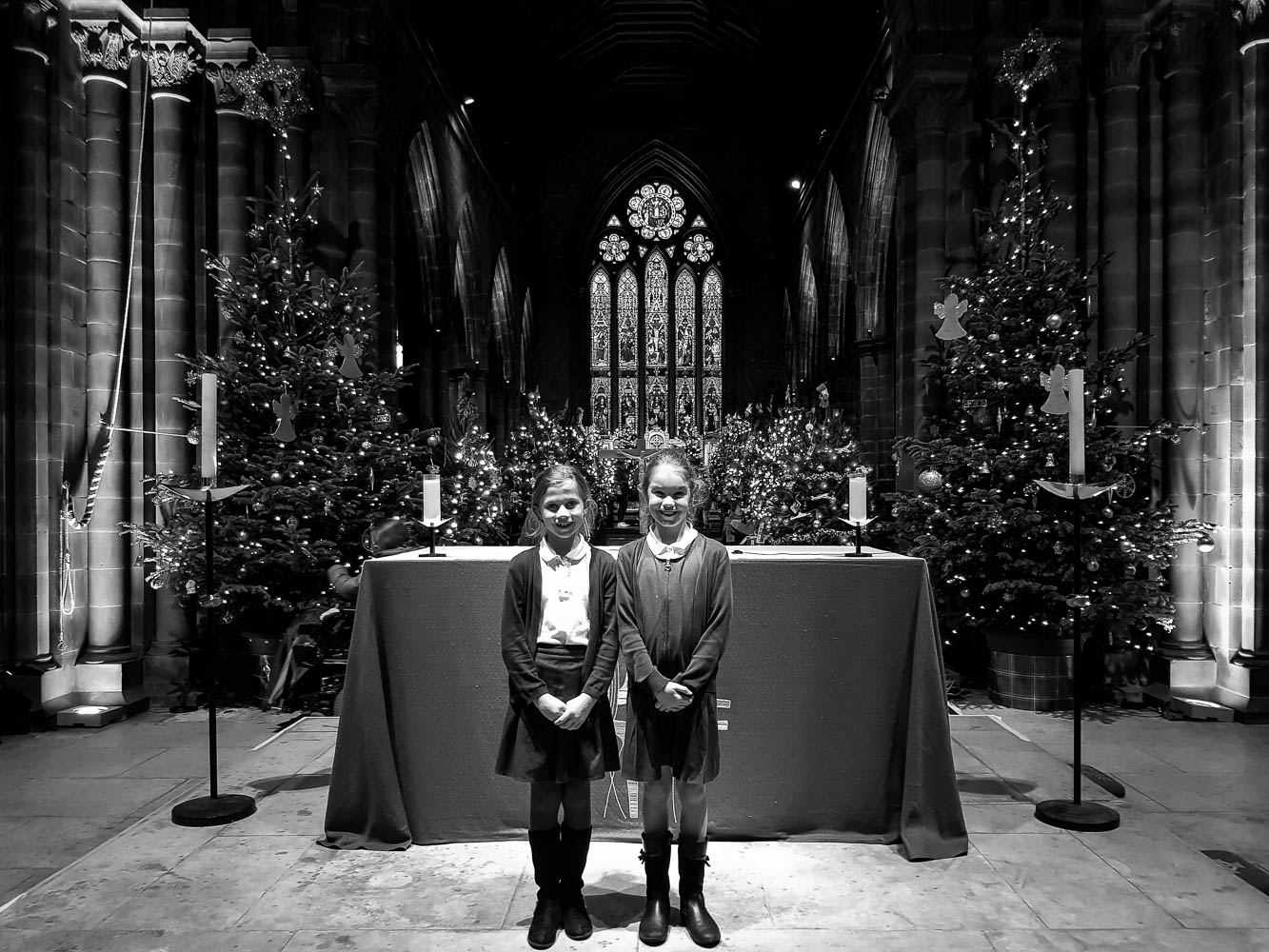 Ella’s high school held a Winter Fair at the start of December to raise money for charity and she was keen to get involved and show her support for the school.  She spent all of her lunchtimes at school making Christmas cards to sell and together we baked three different types of cakes for her stall: vanilla butterfly cakes with chocolate buttercream and sprinkles; double chocolate ‘Christmas Pudding’ cupcakes; and carrot cake with cinnamon cream cheese frosting.  It took us forever but it was a lovely thing to do together and I think she sold most of them, so she was pleased with the outcome. 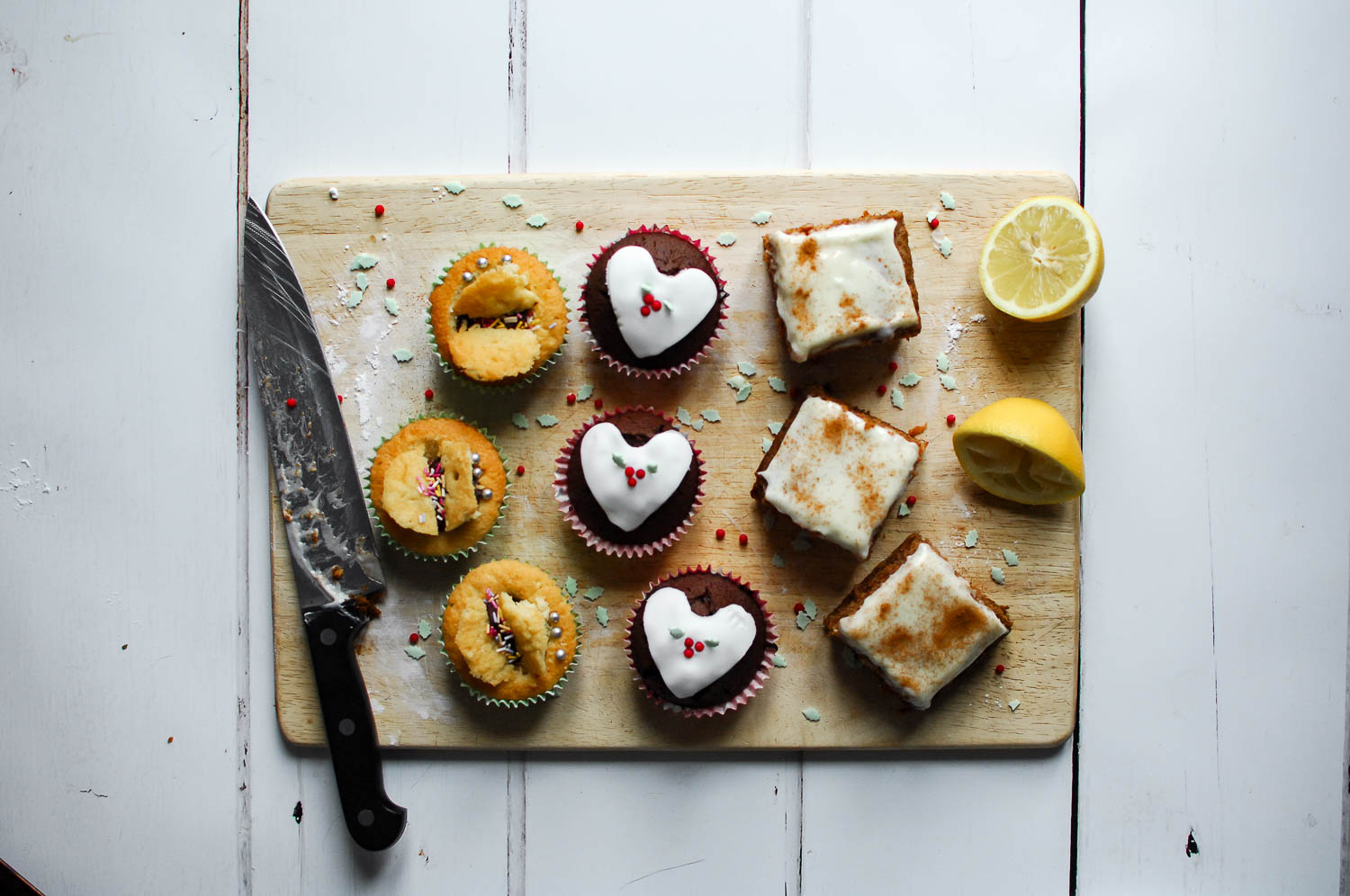 Of course I also made Christmas dinner on Christmas Day and as usual cooked too much – we’ve had plenty of leftovers to use up over the last few days.  It’s Ella’s favourite meal of the year (“because we all sit down together to eat”), Mimi loves the honey-roasted carrots (literally the only vegetable she’ll eat) and Lola, bless her, only likes the stuffing balls (which she eats with ketchup!).  It takes forever to cook, it’s over within half an hour and the mountain of washing up is quite ridiculous but I do love doing it.  One day, when we have a bit more room, I’d love to properly host Christmas for both sets of parents too.

And finally, as cheesy as it sounds, we made some wonderful memories throughout December this year.   We followed our traditions of putting up the Christmas tree the day after Ella’s birthday; taking silly festive photos; decorating a gingerbread house; visiting Santa (even though we have one non-believer this year *sob*); and going for a Christmas Eve walk, as well as squeezing in all the birthday celebrations, lots of family time and a couple of extra surprises too! 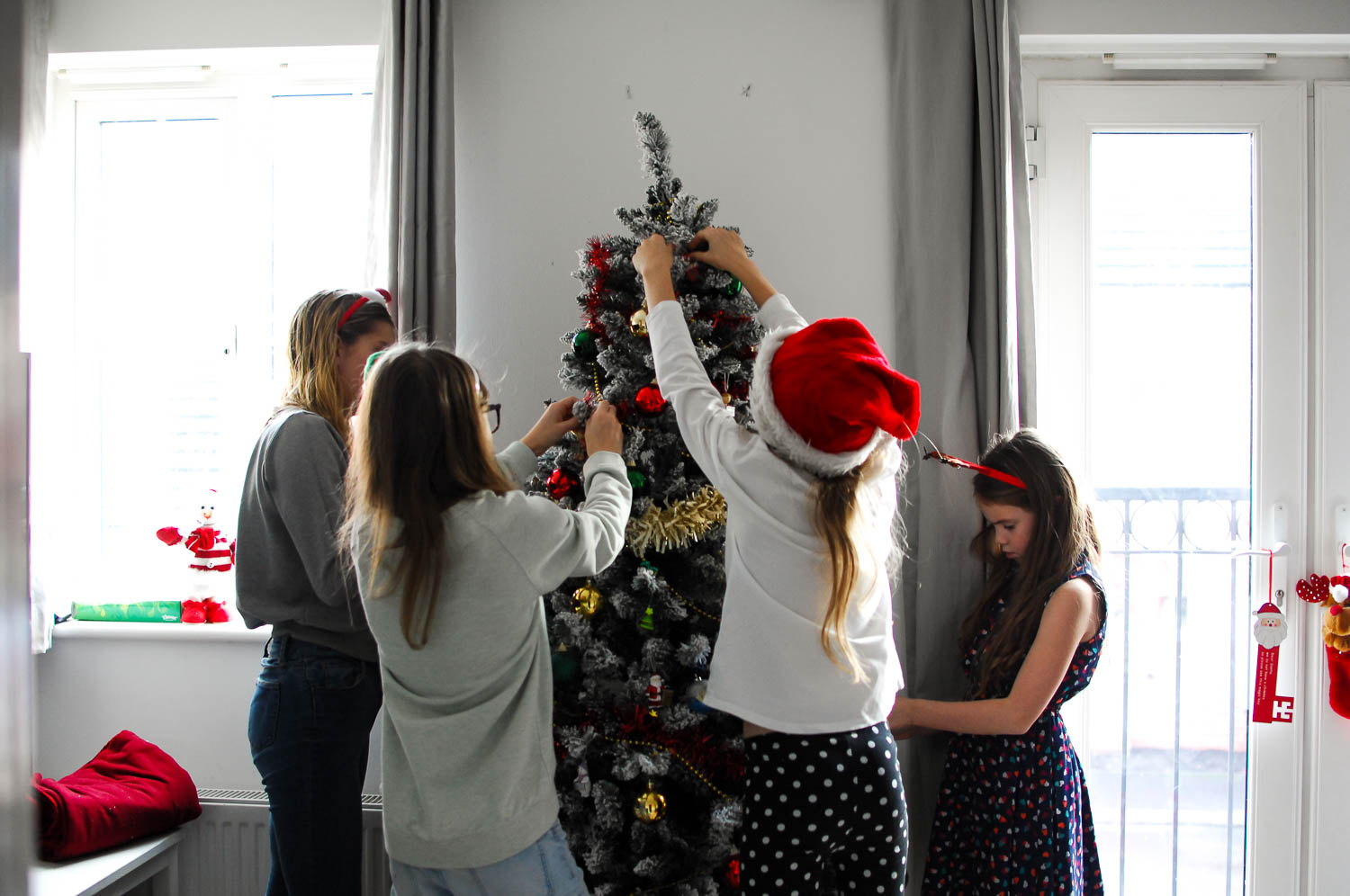 Putting up the Christmas tree 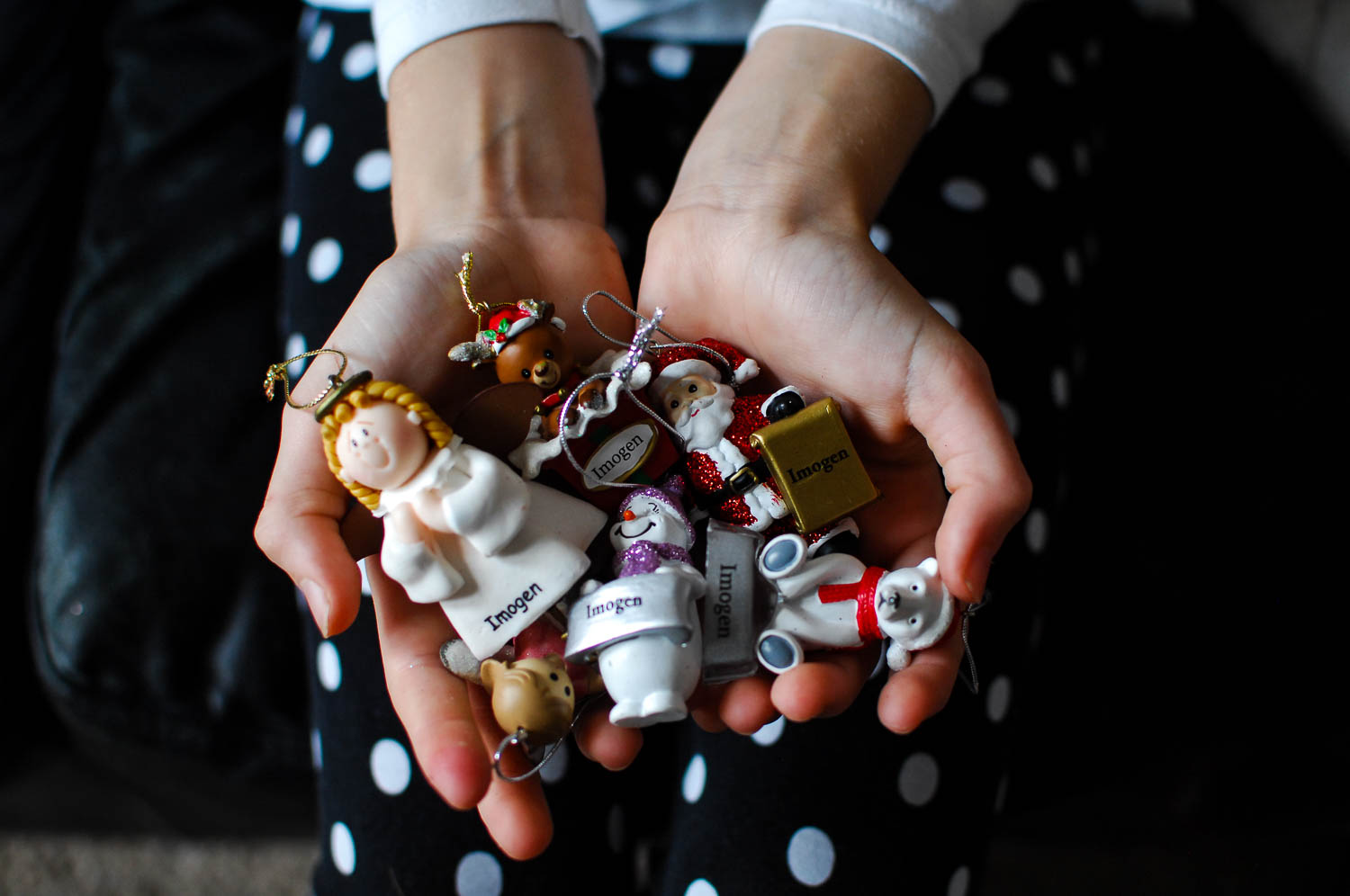 Every year my Mum buys each of the girls a personalised ornament for the tree. We’ve got quite a collection now! 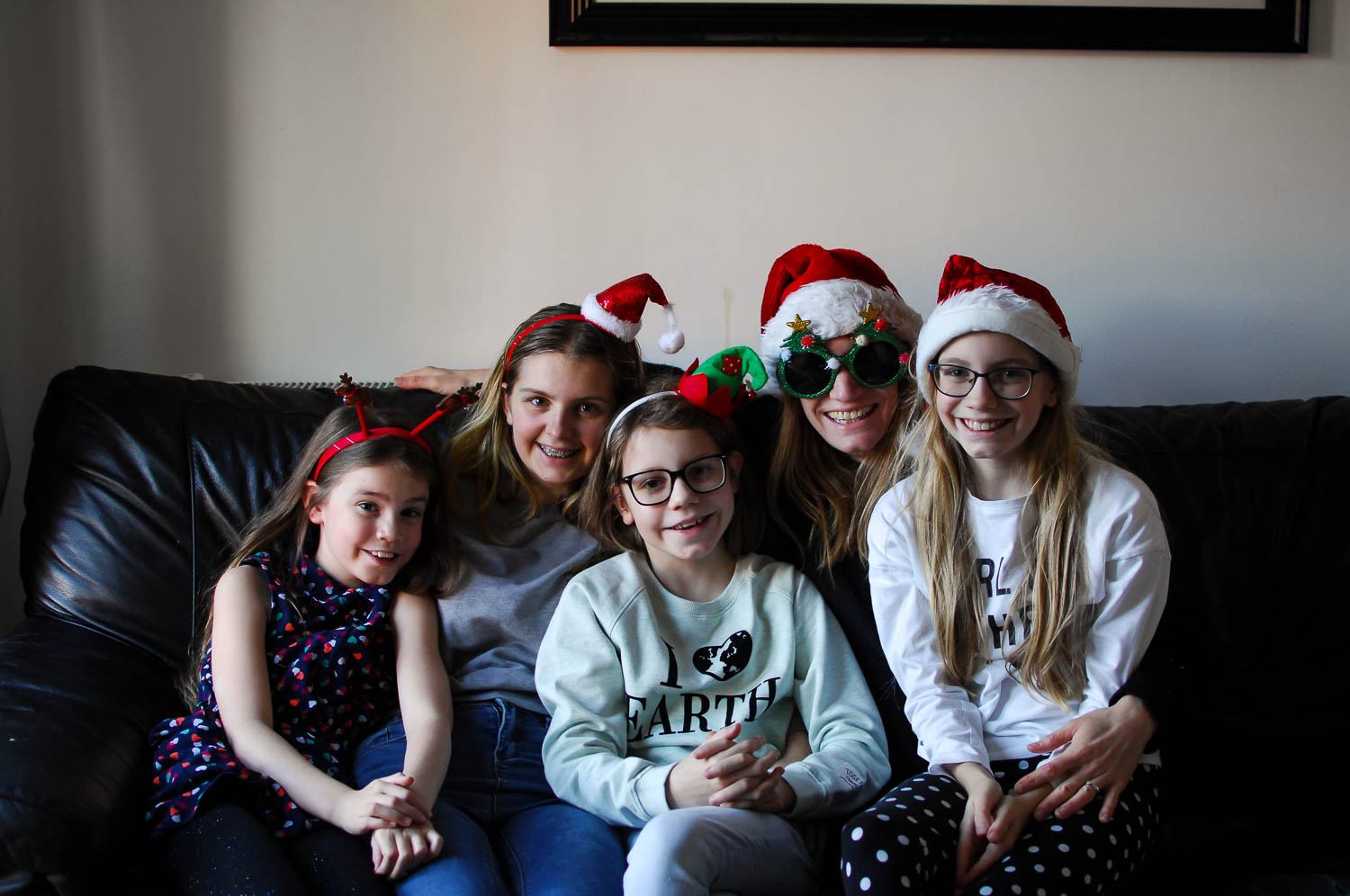 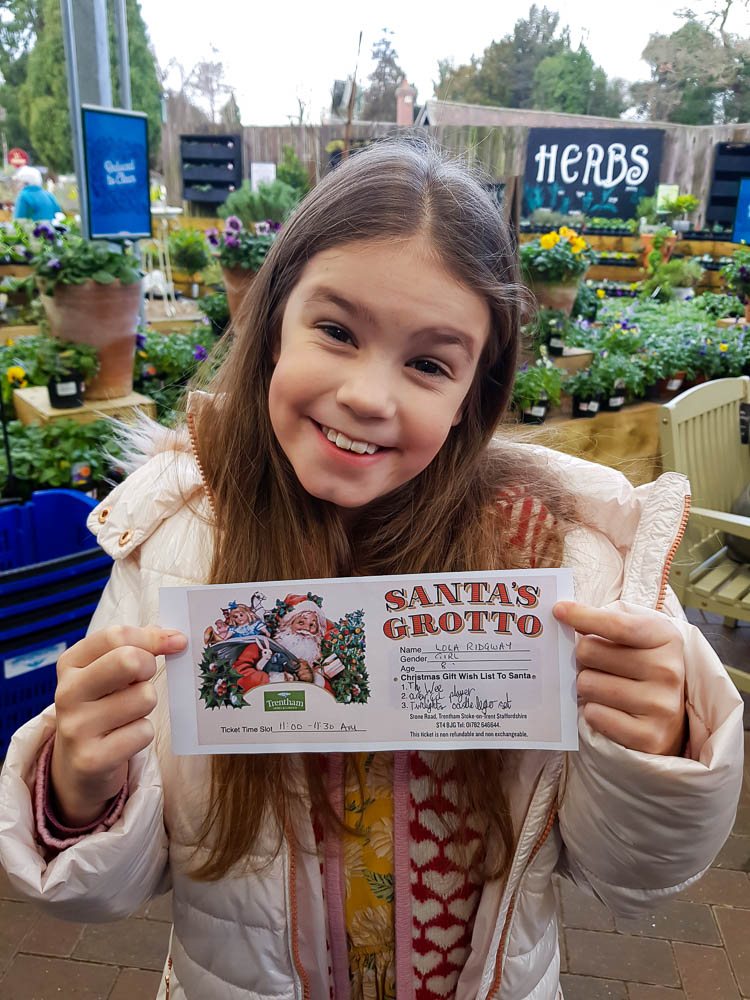 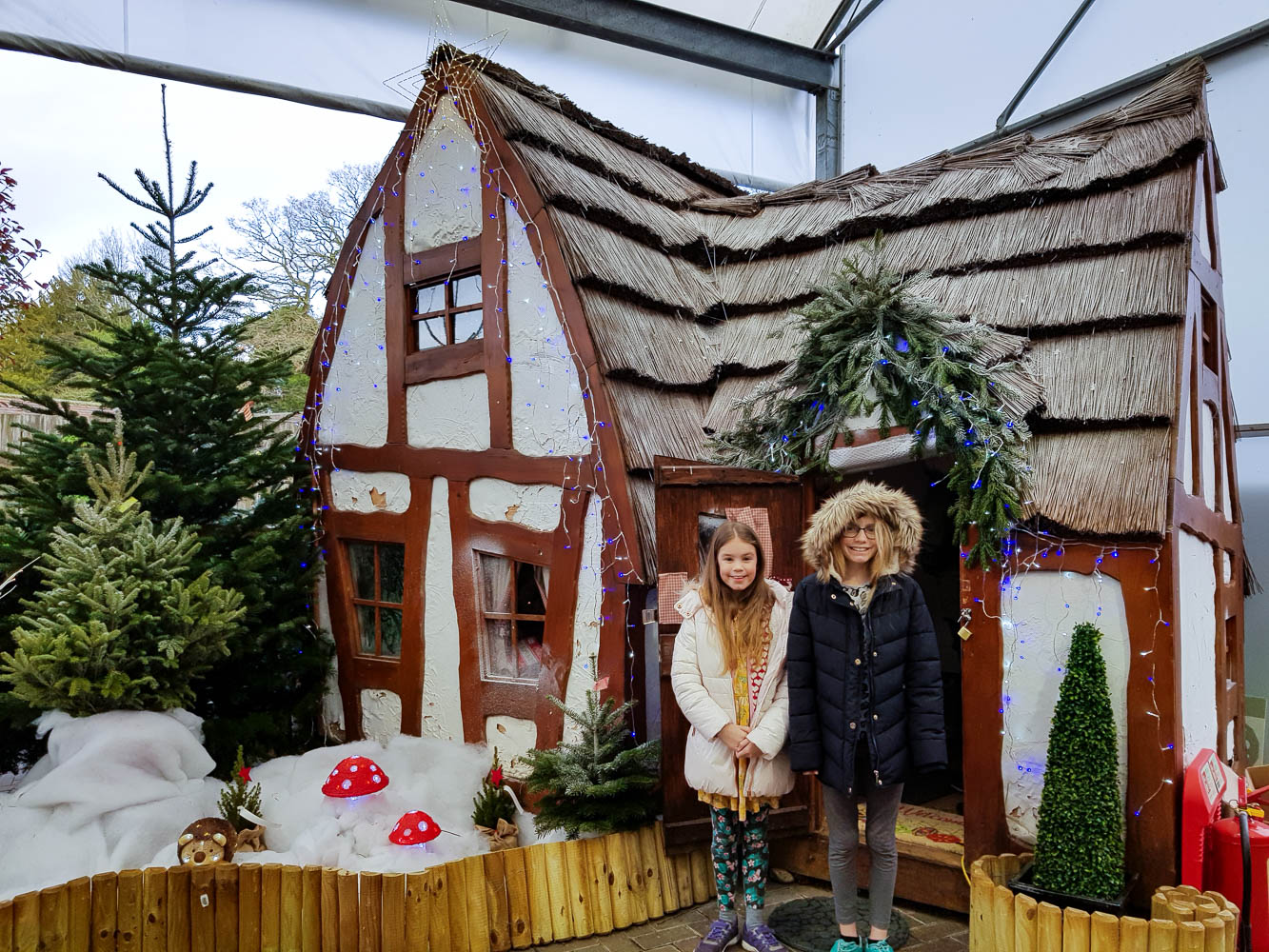 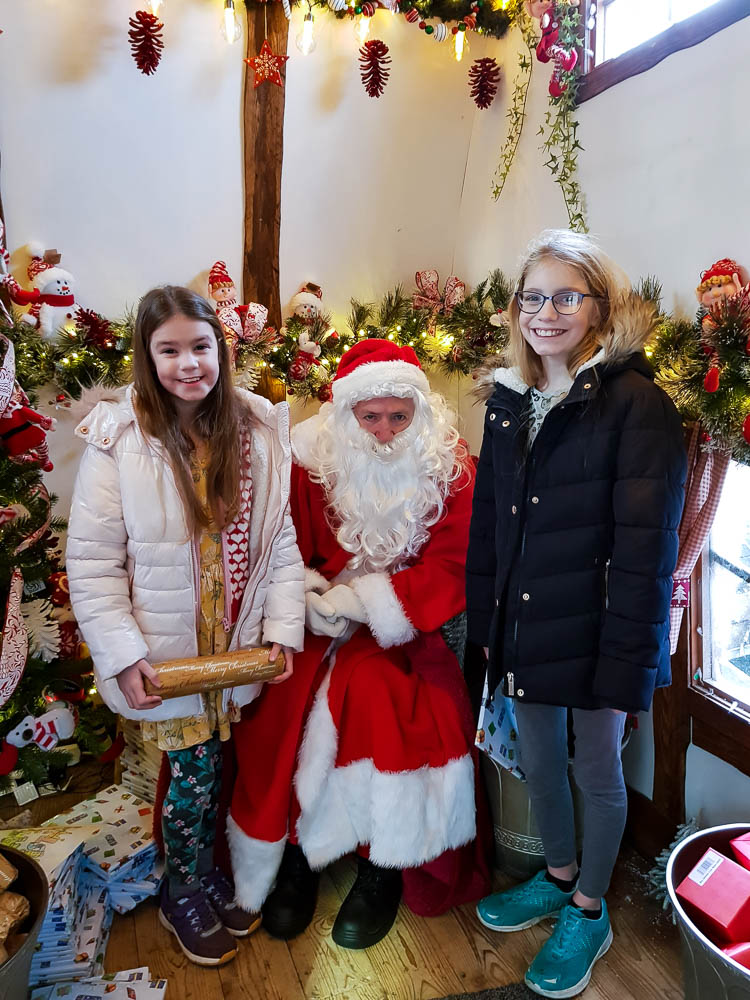 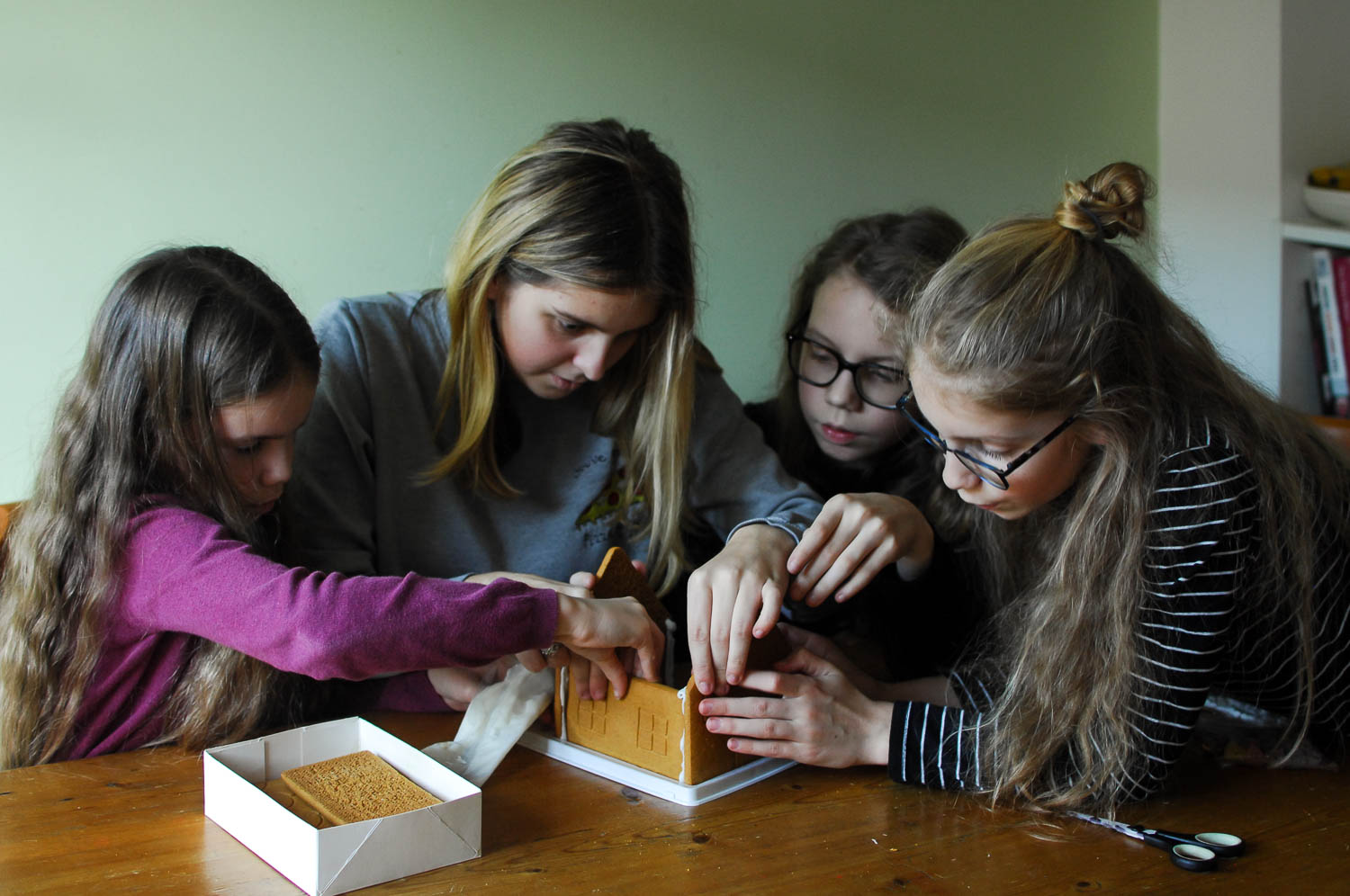 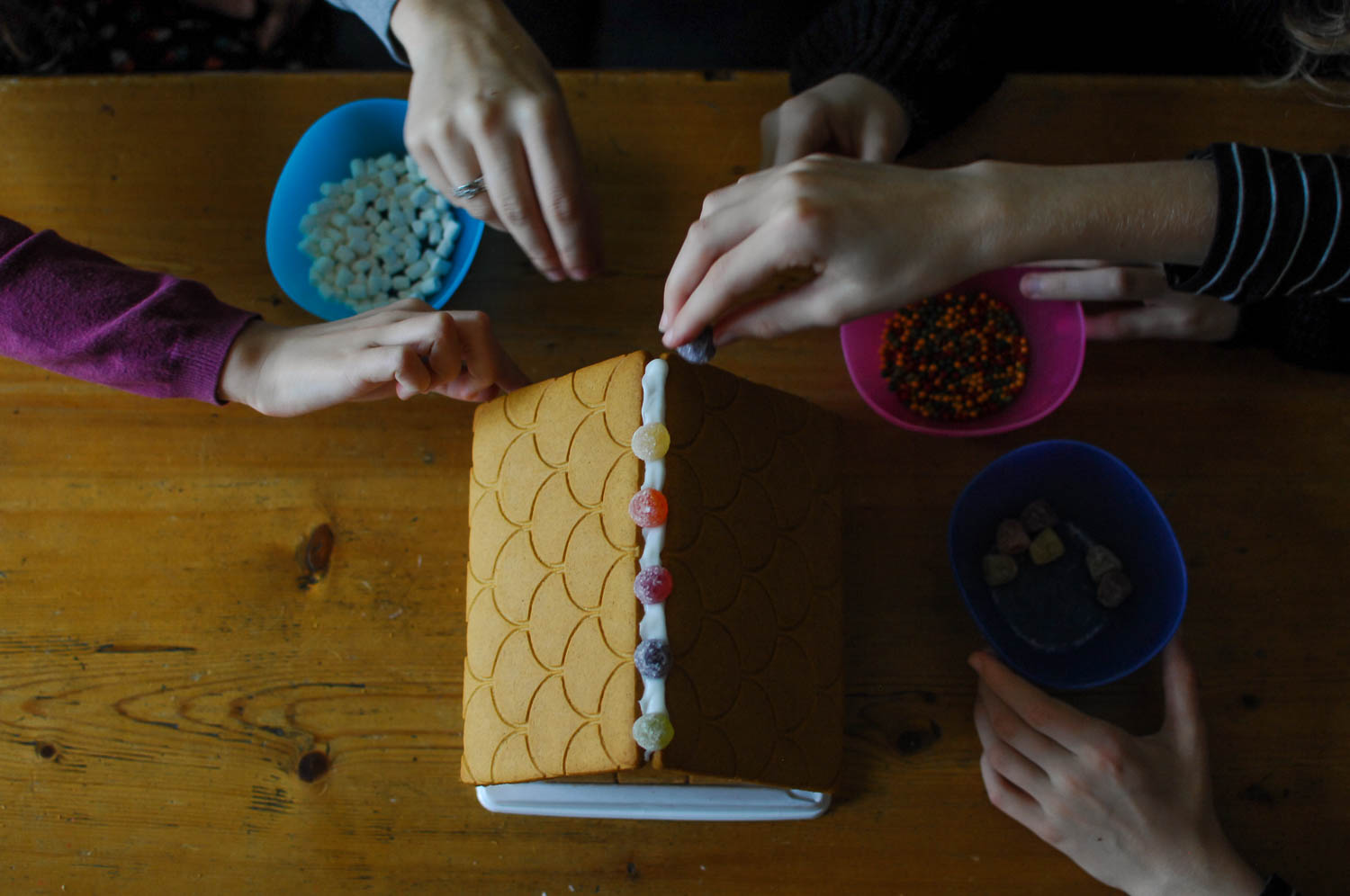 Decorating the roof with sweets 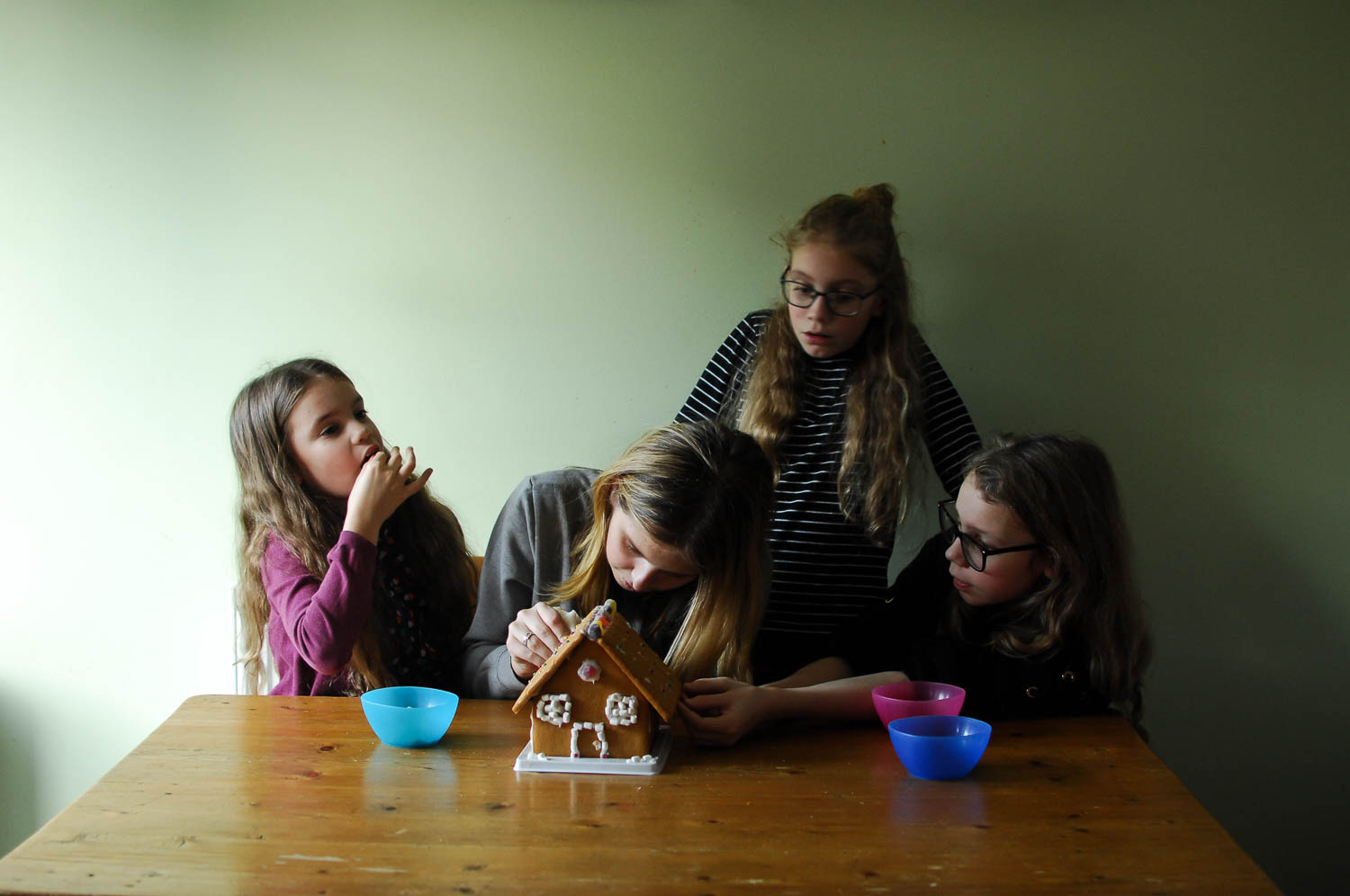 I think just as many sweets got eaten as made it onto the house! 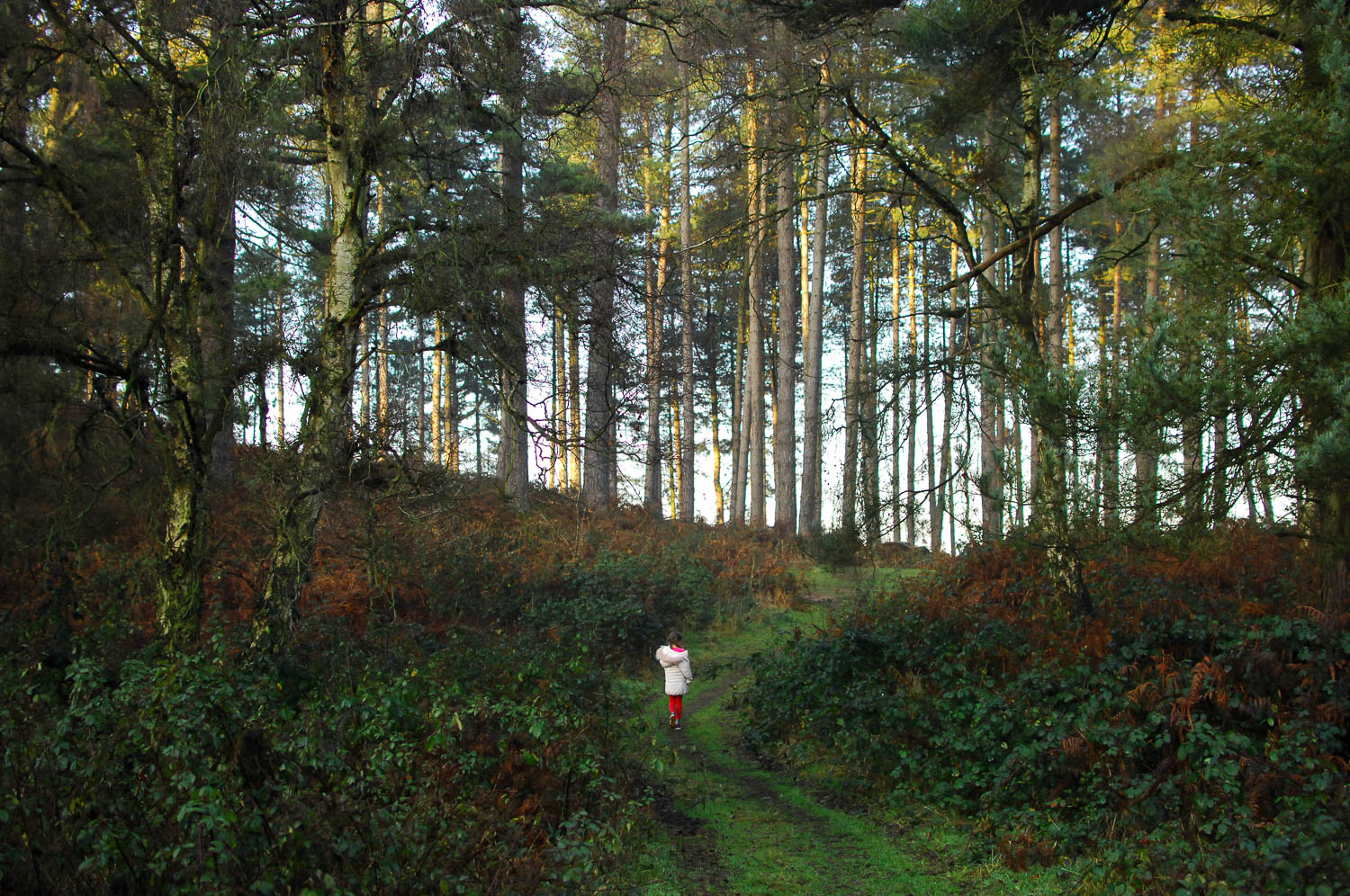 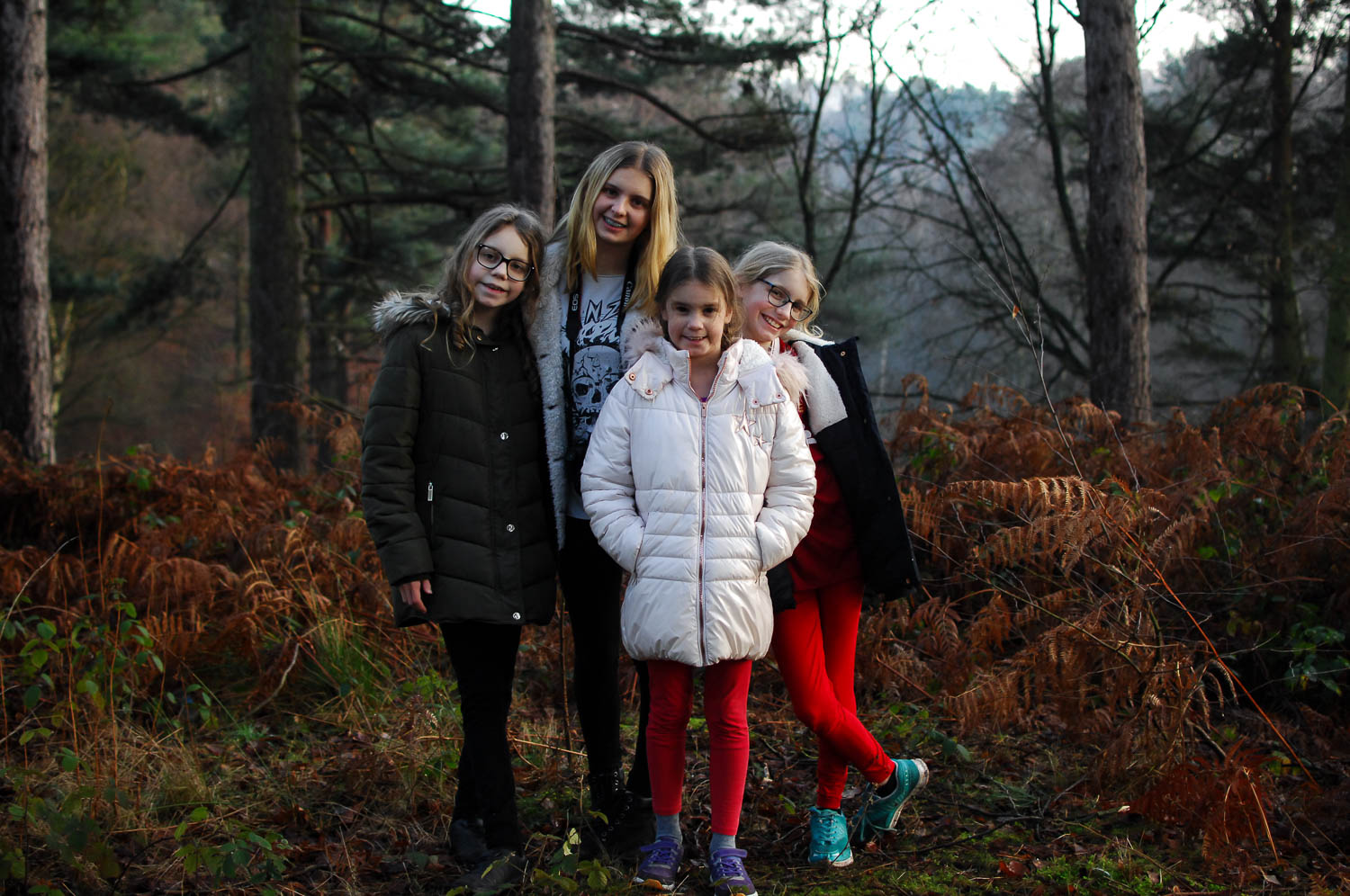 All four girls together

The Christmas jumpers put in their annual appearance – Mimi and Lola wore theirs to raise money at school for ‘Save The Children’ and I wore mine on Christmas Day.  I’m proud to say I also wore a skirt for the husband’s birthday dinner out – we went to a really lovely hotel/restaurant and I wanted to make a bit more of an effort.  It’s been so long since I wore anything other than jeans and I feel like I’ve completely lost my confidence with regards to what to wear, so it felt good to be reminded that I can feel comfortable and confident and ‘me’ in something that I wouldn’t usually wear. 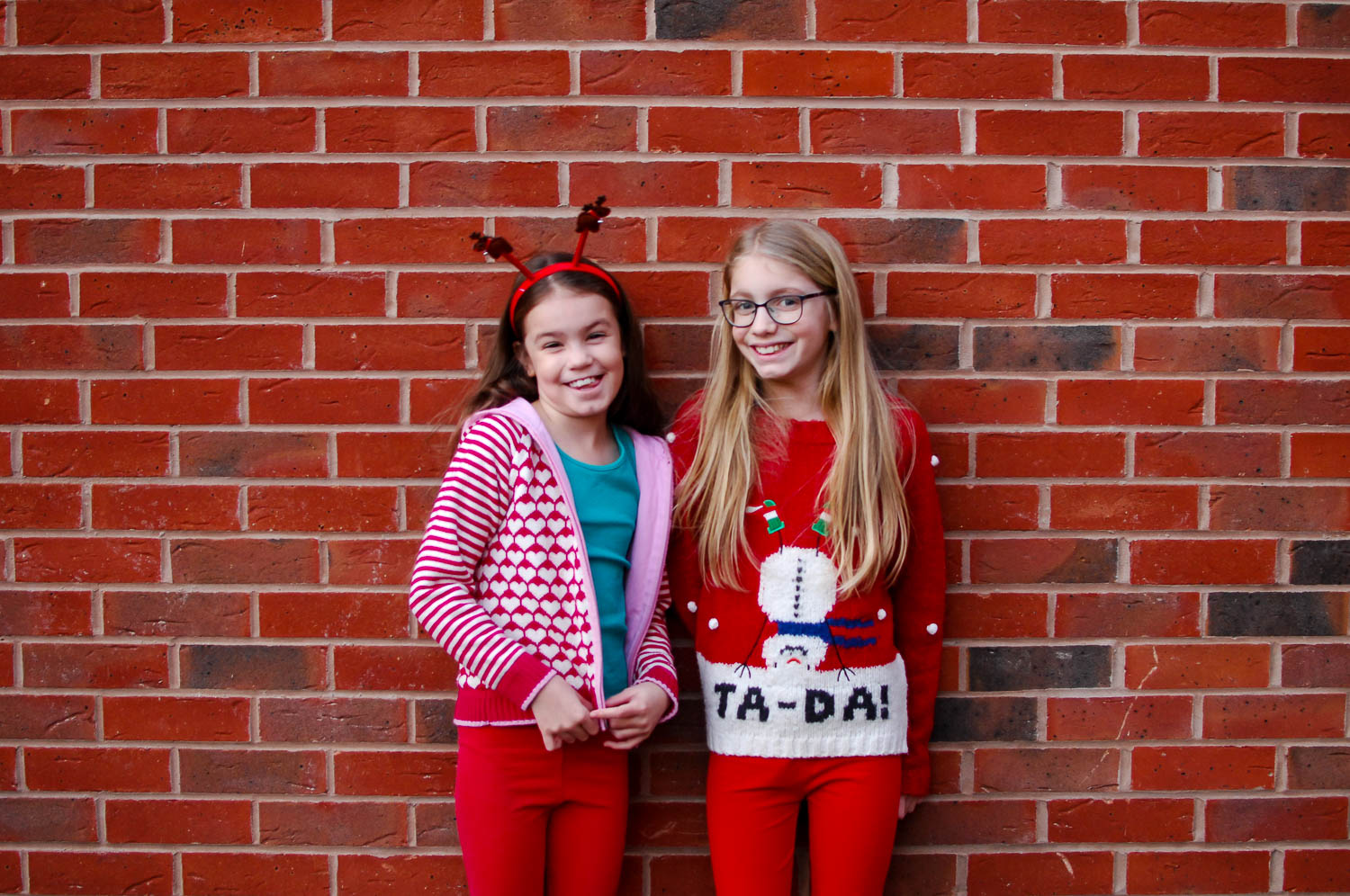 Mimi in her Christmas jumper and Lola in festive colours

It’s been a month of birthdays which started off with Ella turning twelve years old!  I still can’t believe it.  She opted to go to the cinema to see The Grinch with a couple of friends (no adults!), and we all went out to Pizza Express for dinner as a family.  She was absolutely thrilled with every single gift she received and was incredibly grateful for them all too.  I wrote this post to document her special day. 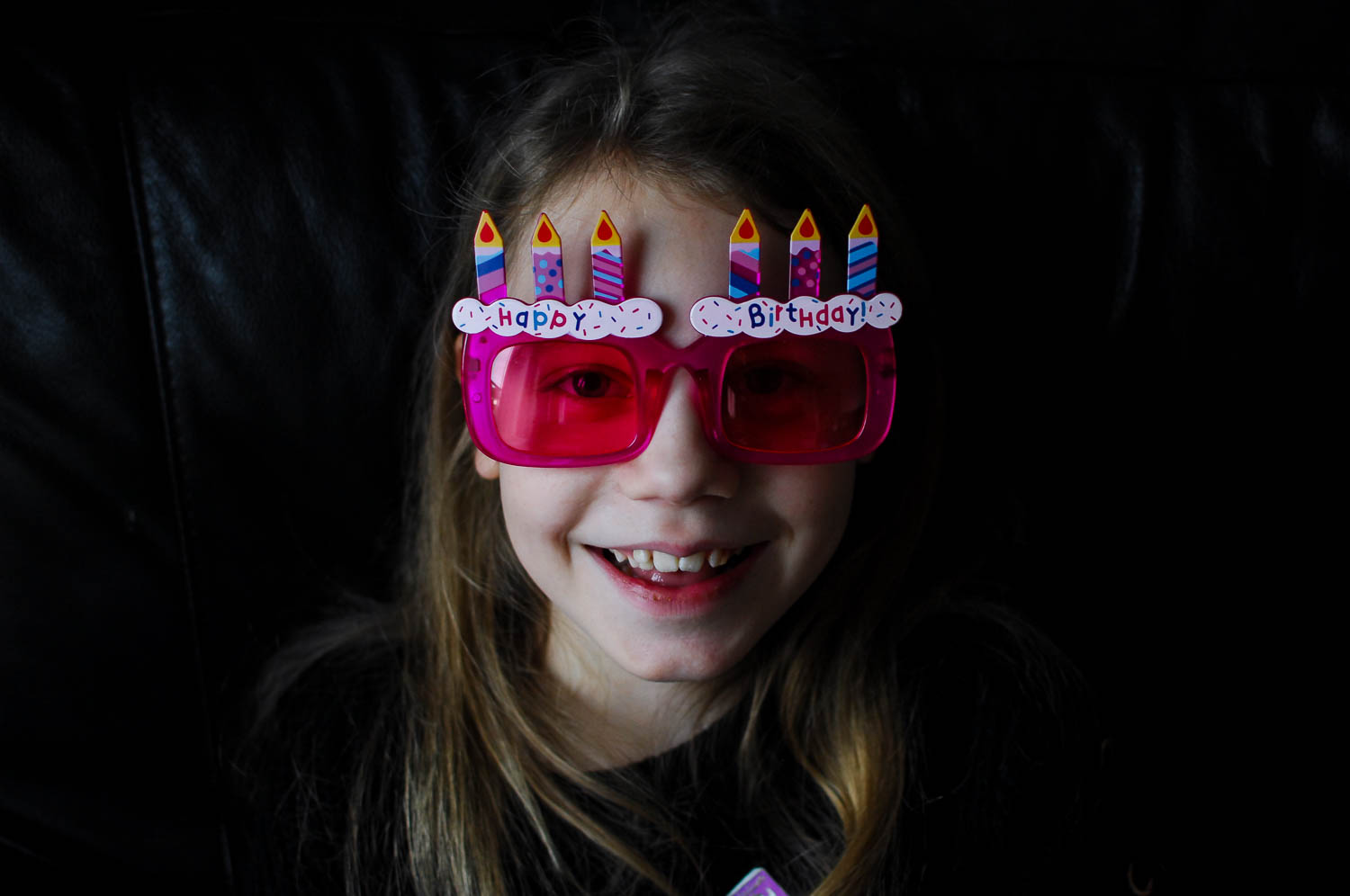 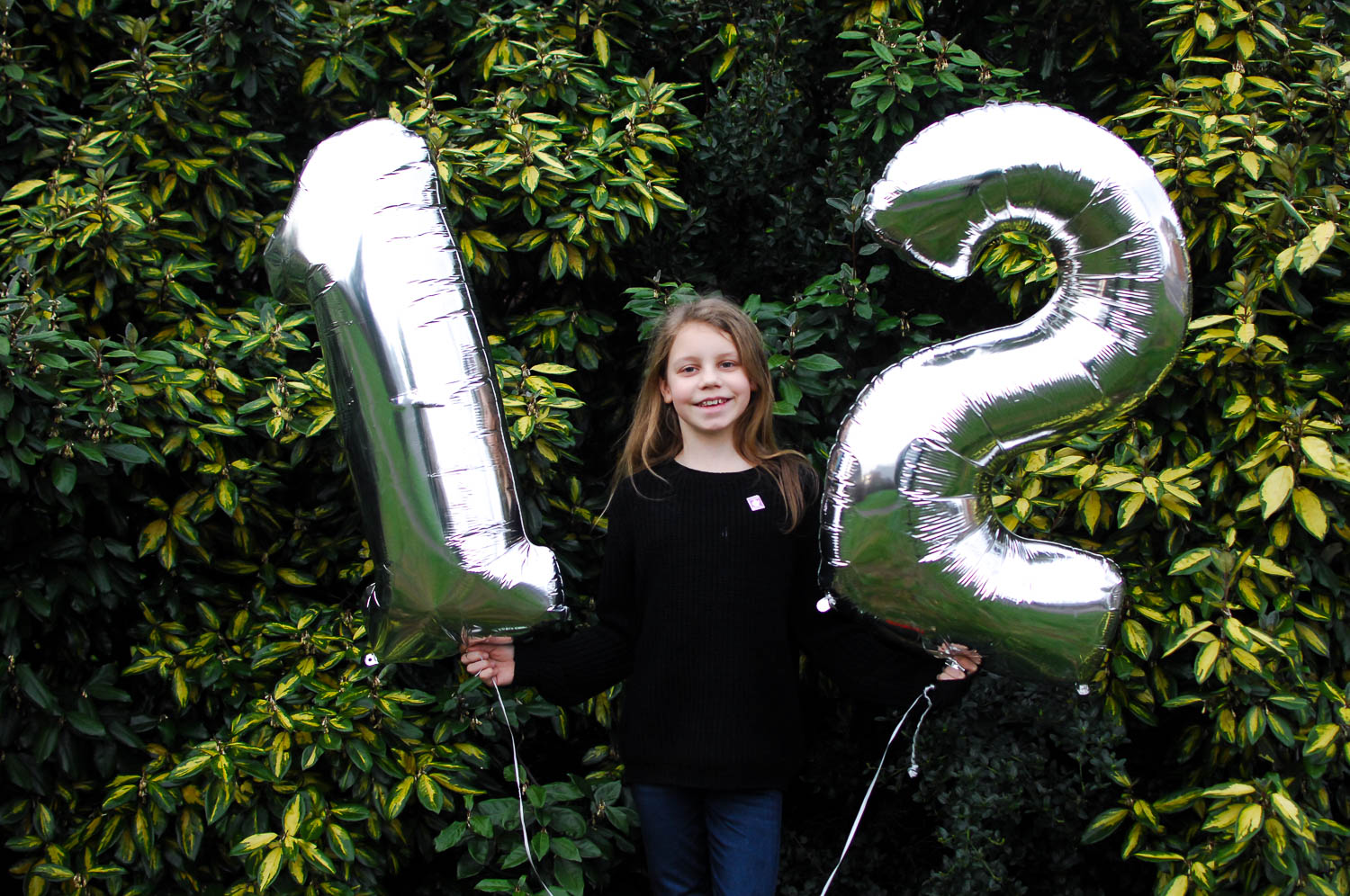 The second milestone birthday we celebrated was the husband’s 40th.  He fulfilled his dream of going to Las Vegas last month, so our celebrations were quite modest: I filled the lounge with balloons, he opened his cards and presents with the girls in the morning before they went to school, we had a cheeky daytime date of playing pool and taking silly photo-booth photos, and in the evening we went out for a delicious Indian meal at a local restaurant and a trip to the cinema.  I also organised a surprise meal out at a fancy hotel/restaurant with his and my parents too, which was lovely.  The teenager was supposed to be there as well but something came up that meant she couldn’t attend which was a shame – we missed her.  It was a good evening though and I think he was pleased to have been made a fuss of. 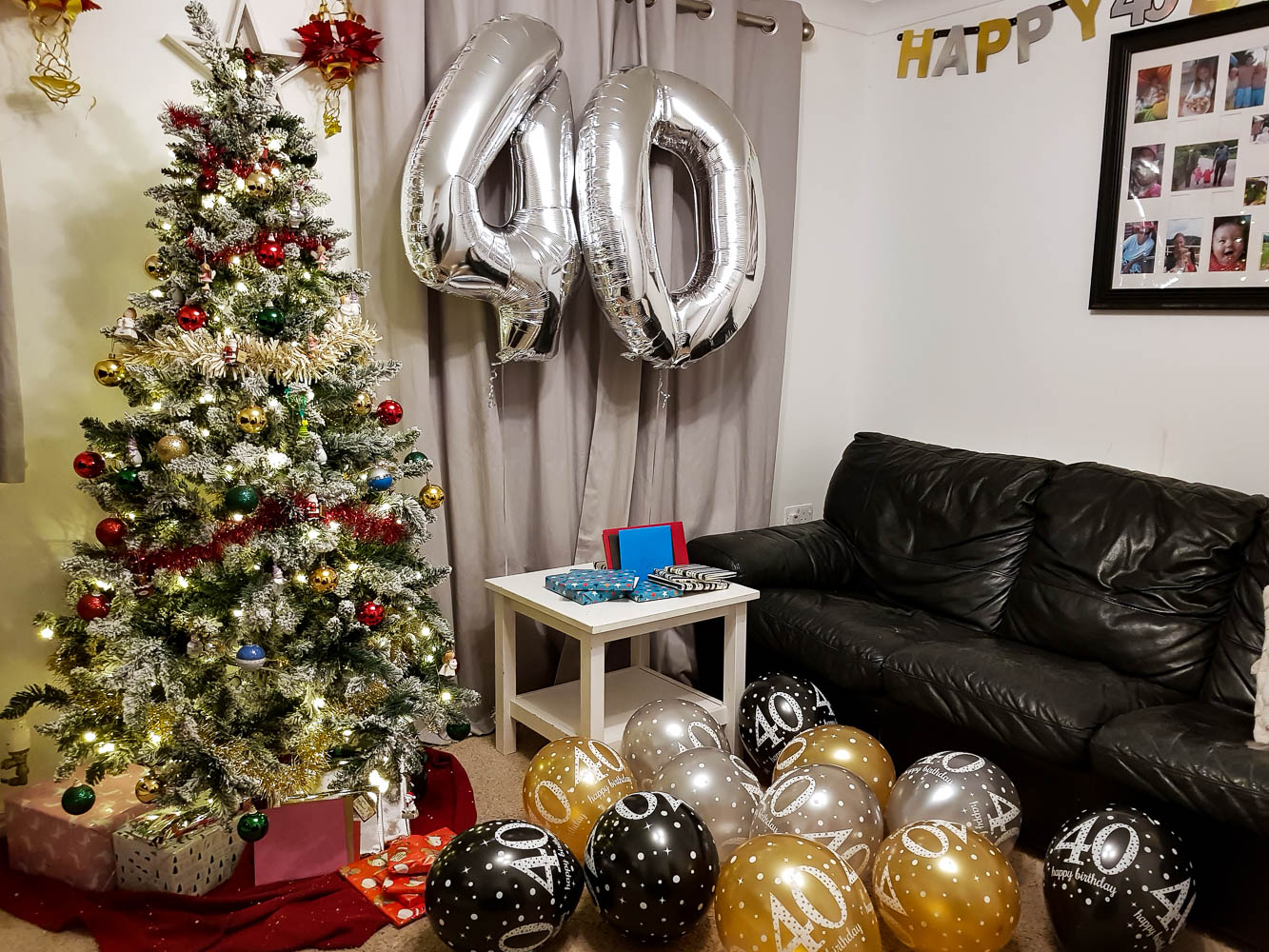 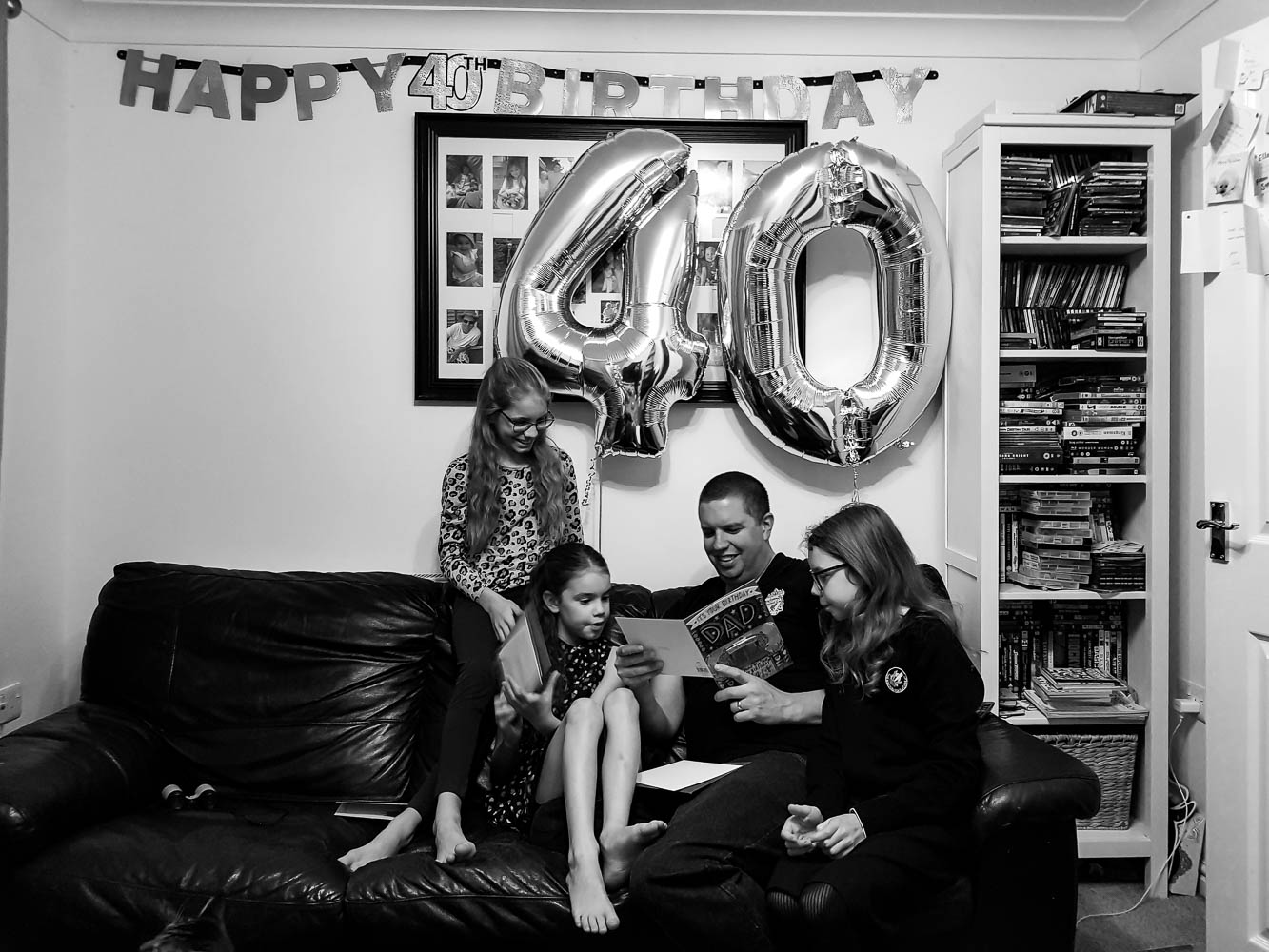 The husband opening his cards and presents

Playing pool. He thrashed me 3-1 but I’m pretending I let him win as it was his birthday 😉 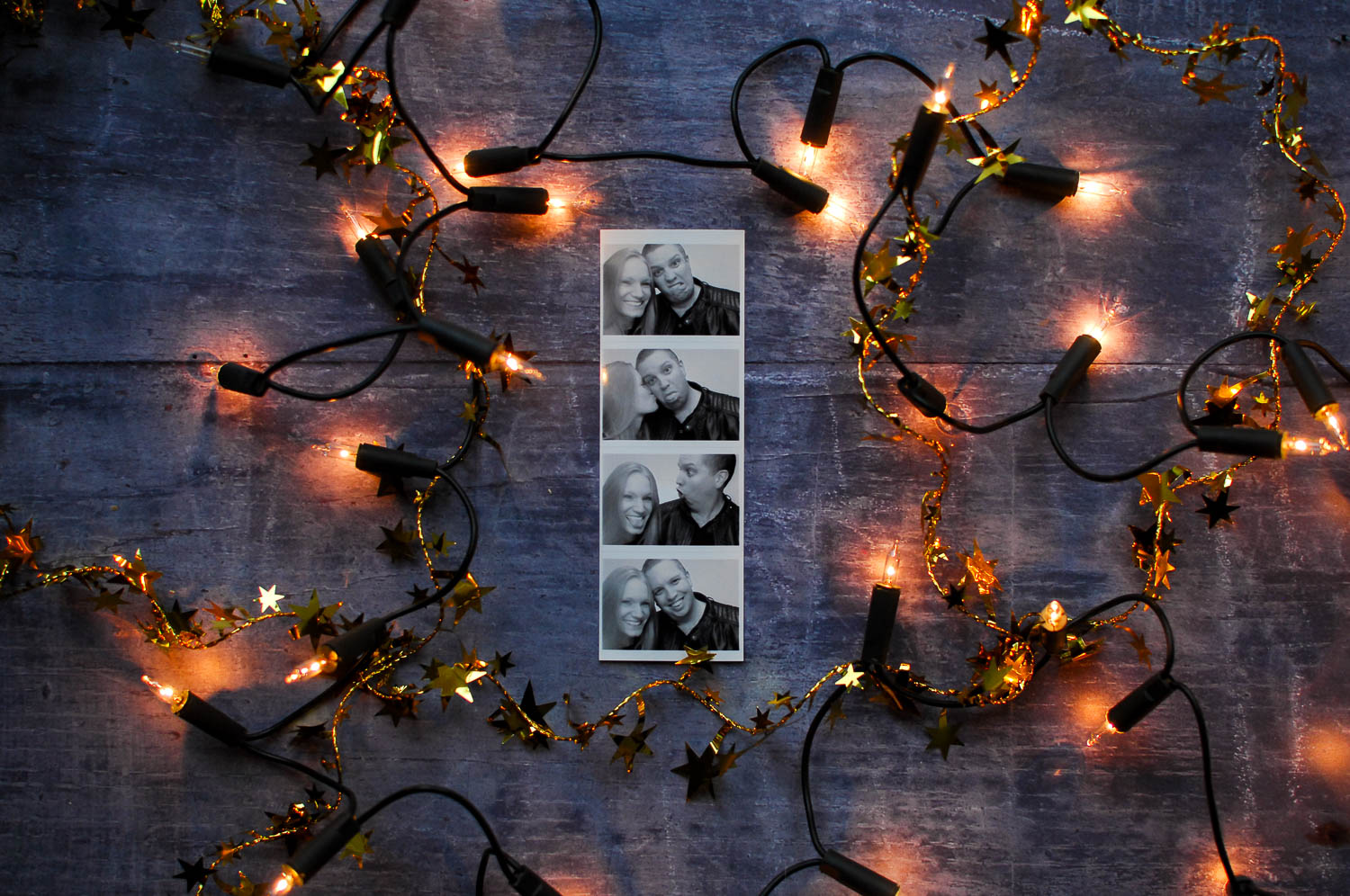 I really love these photo-booth photos we got! 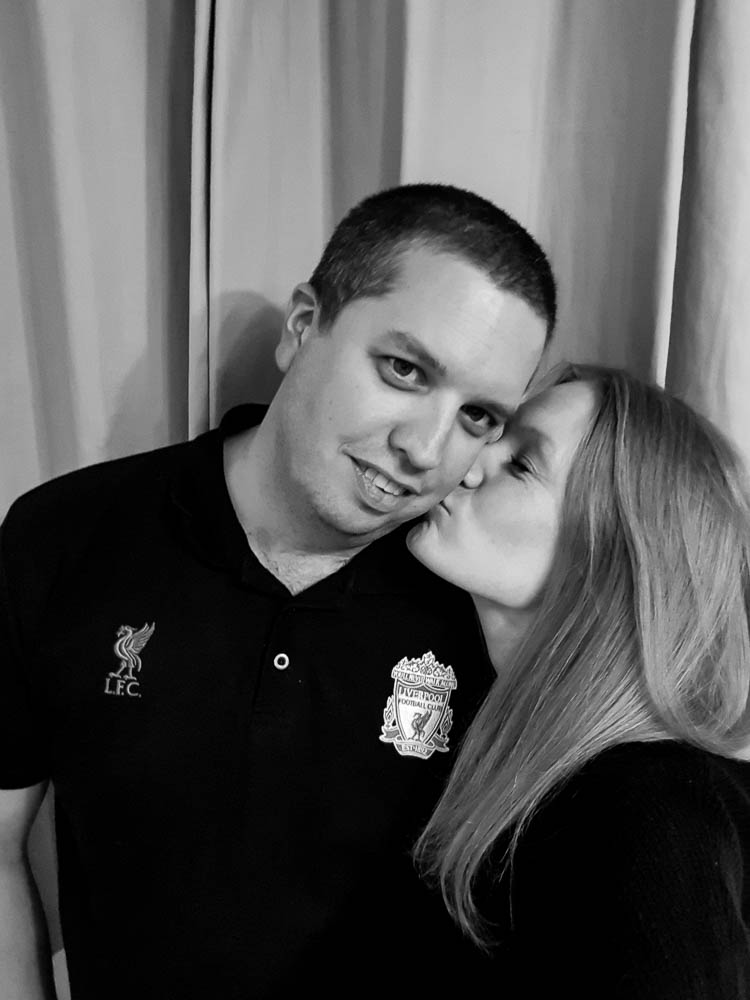 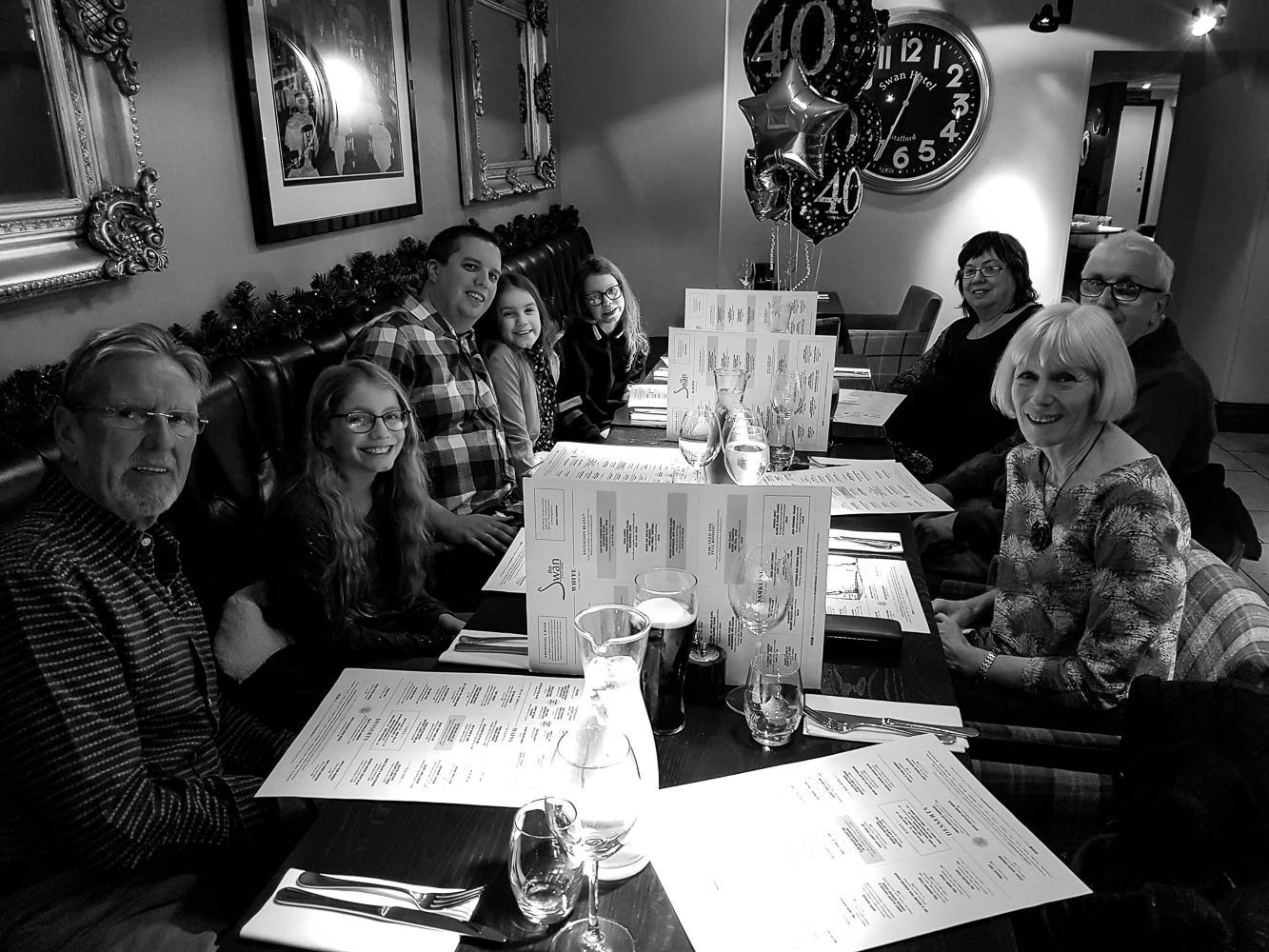 The second surprise we managed to pull off was that the teenager spent Christmas with us for the first time ever!  We kept it a secret from the girls and they didn’t know anything about it until they woke up on the first day of the Christmas holidays and there she was, having arrived late the night before after they’d all gone to bed.  The looks on their faces were absolutely priceless.  Sophie normally spends Christmas with her Mum and stepdad, and we celebrate a mini-Christmas with her sometime between Christmas and New Year.  The husband was over the moon to have her with us for five days and it was so good to be able to spend quality time with her.  We tried our best to honour her Christmas traditions as well as our own and I think she enjoyed herself.  It certainly made it an extra special Christmas for us. 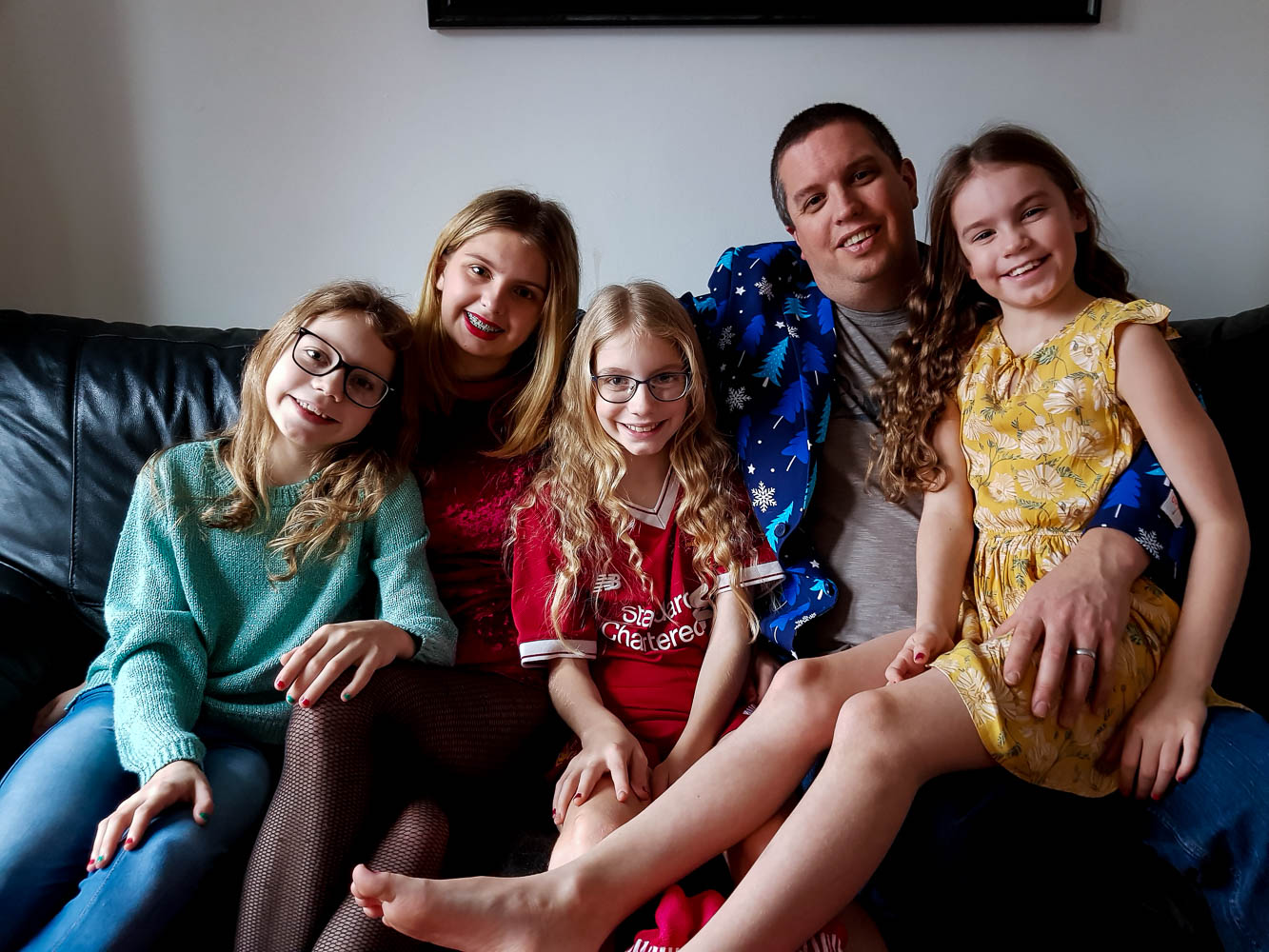 Christmas Day! The husband with all of our girls 🙂 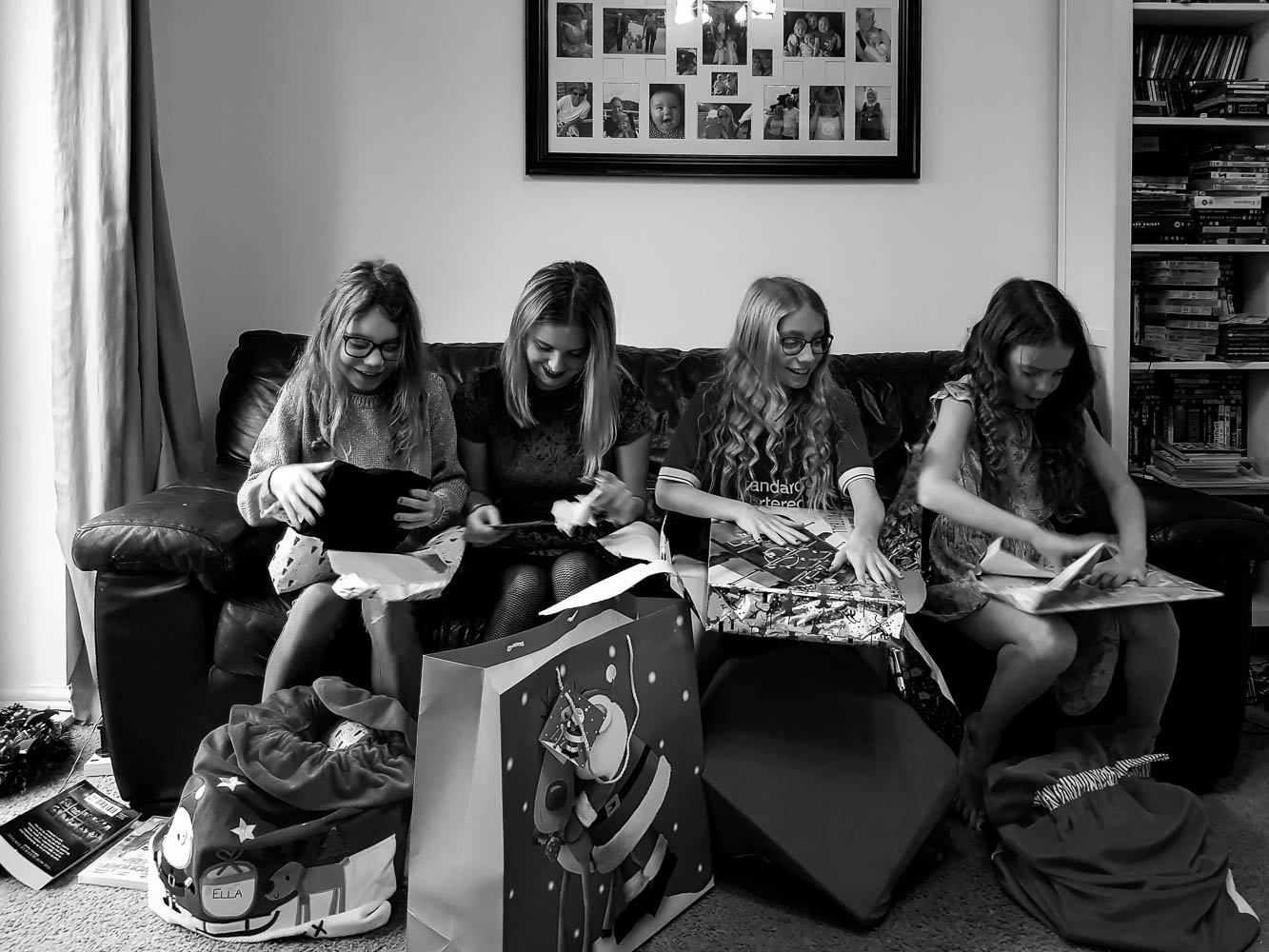 Opening their Santa sacks with much excitement (even the teenager!)

And last but not least we celebrated mini Christmas with my parents a couple of days ago too.  I always put on a big buffet of food for everyone to help themselves to (which the girls LOVE) and we exchange presents and play games and laugh and talk.  It helps give a focus to the lovely, lazy days in between Christmas and New Year and means the excitement of the festive season gets stretched out for longer than just one day. 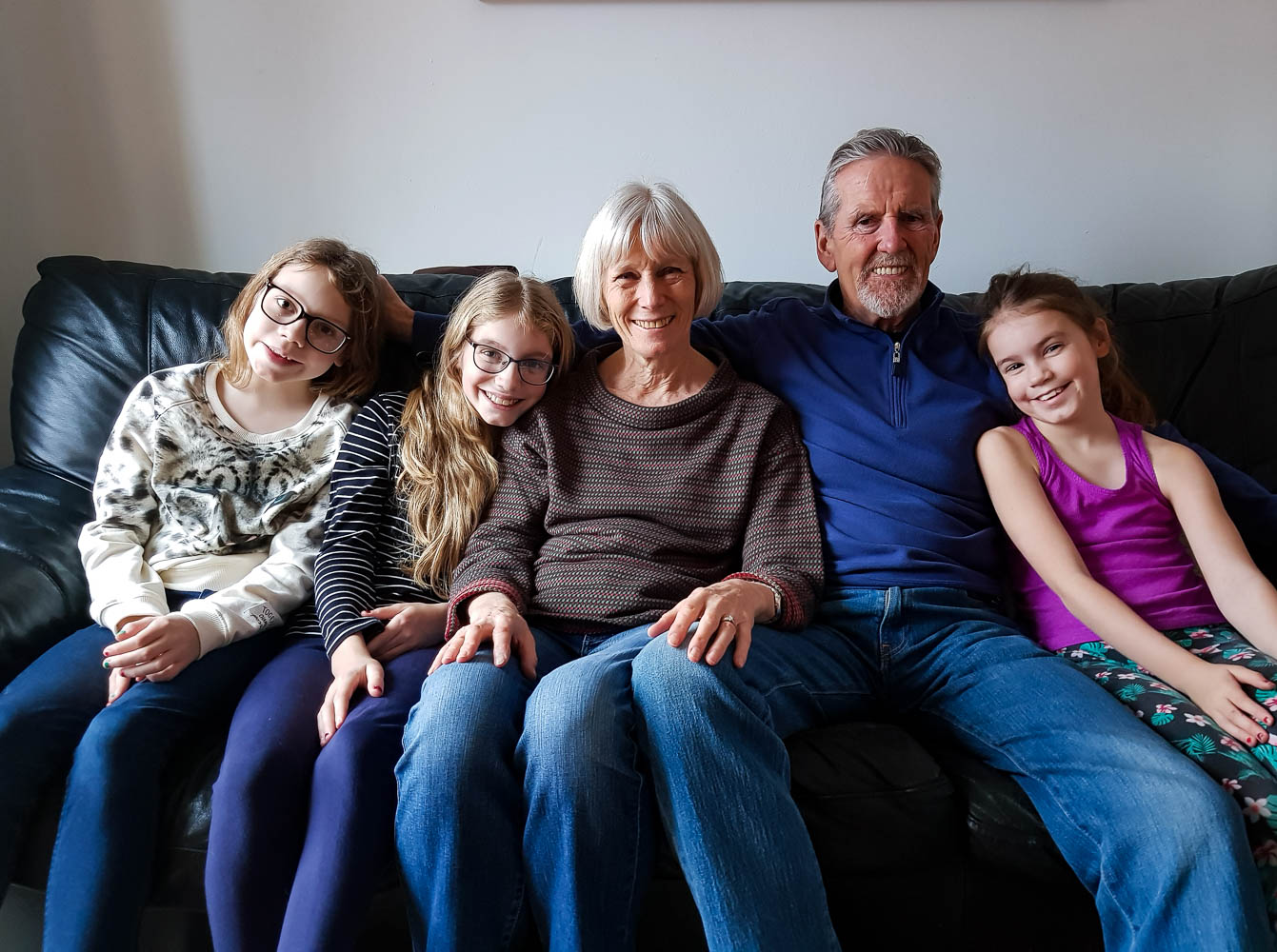 Mini Christmas with my parents

And now suddenly we’re at the end of 2018 and about to embark on a fresh new year.  It’s definitely been a December to remember for all the right reasons.  2019 is a blank new canvas and I have no idea what the next twelve months are going to hold apart from a couple of travel plans we already have in place.  I’m working on setting my intention for the year ahead and am open to saying yes to whatever opportunities I can create.

Welcome to the first installment of a brand new year of Project Happy! It still blows my mind a little bit that I’ve been…