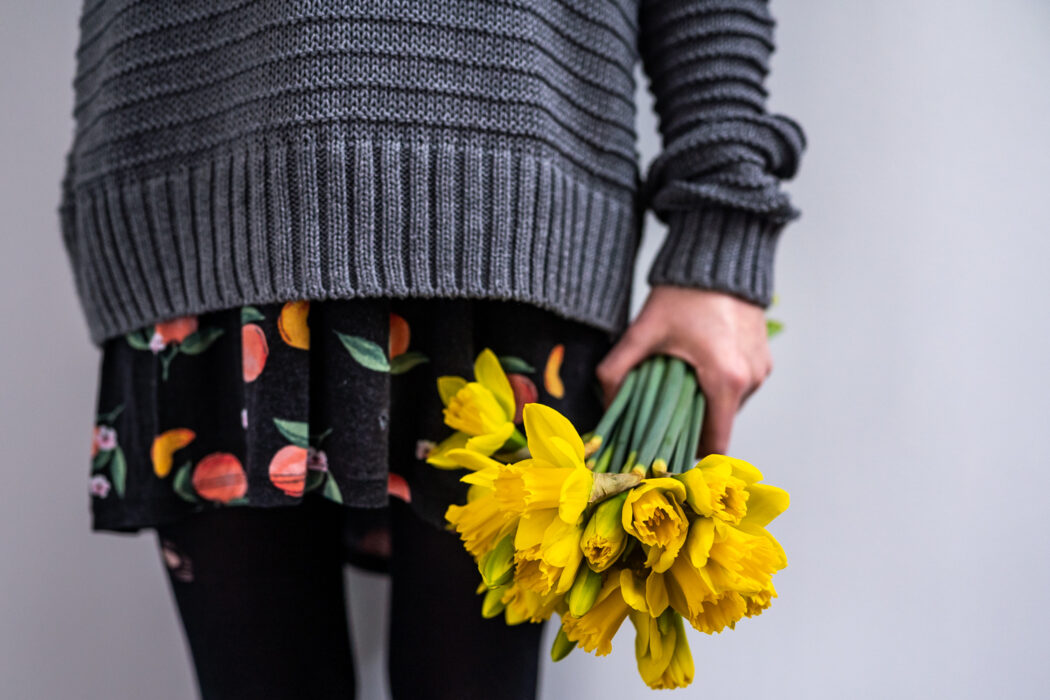 February was an immensely challenging month for various reasons.  A lot of my time was spent supporting a friend going through a crisis; all of my Dad’s anniversaries fall in February (his death, his birthday and the day of his funeral) and Lola started to really struggle with her sensory issues more than usual, which coincided with the discovery that she was being bullied at school, resulting in her refusing to attend.  It was a lot.

I found it harder than usual to find the joy this month.  But not impossible.  I just needed to look a little more closely.  Although there was one very exciting event that took place that was absolutely the highlight of the year so far…

Here are all the little things I’ve been loving lately throughout February:

Atlas Of The Heart:  I’m about halfway through ‘Atlas Of The Heart’ by Brene Brown now.  I’ve not had the headspace to read much this month.  Even so, I’ve had SO many insights and realisations whilst slowly working my way through it.  It’s written in a way that makes so much sense and gets right to the core of things.  I know it’s a book I’m going to refer back to over and over again. 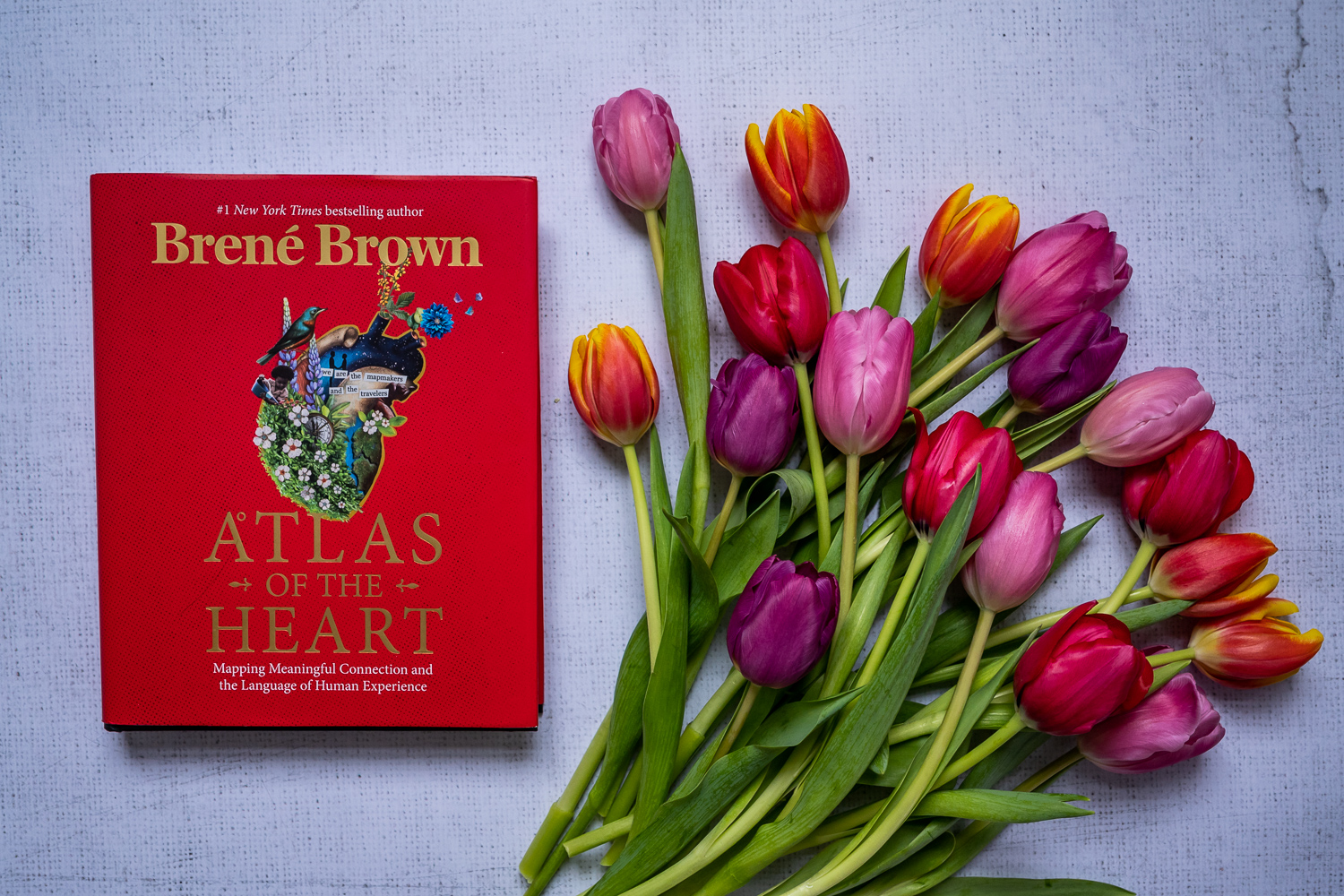 ‘Atlas Of The Heart’ by Brene Brown

Caraval:  I started ‘Caraval’ by Stephanie Garber midway through the month.  I can normally only read one book at a time but I wanted and needed something a bit lighter to counteract the challenges that this month has entailed.  I’m only a few chapters in and already intrigued as to where it’s going to go.  It’s quite easy to read so far and I love how descriptive it is. 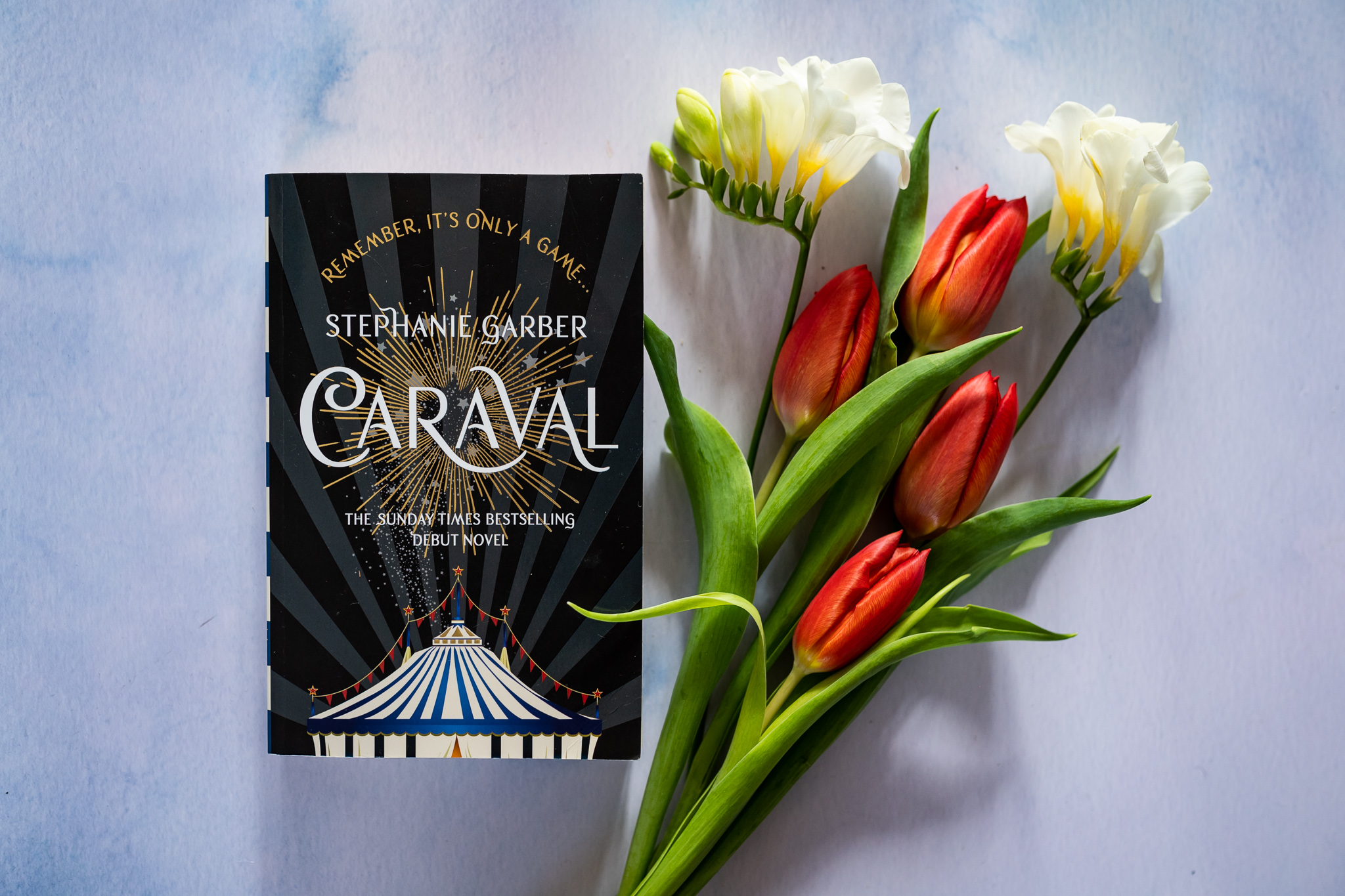 Hamilton:  The highlight of the month!  It was Ella’s birthday back in December and we got her tickets to see Hamilton in the West End in London as her main present.  It was supposed to happen between Christmas and New Year and then I came down with a rotten cold on Boxing Day.  Despite all of my lateral flow tests being negative, I felt pretty dreadful and didn’t want to risk going down and coughing over everyone else in the theatre, so we reluctantly postponed it to February half term.

Ella fell in love with the music and story of Hamilton during the very first lockdown in March 2020 and has been obsessed with it ever since. I’m so glad I managed to get tickets so that we could have a mini-adventure together – our first one!  It was the first time I’ve been to a West End theatre performance for a very, very long time and it was Ella’s first time ever experiencing the magic.  I think I watched her face to see her reactions and expressions more than I was watching the show itself at some points.  She was lit up from the inside with excitement.

Needless to say, it was phenomenal!  The entire production was seamless – the cast, the choreography, the singing, the acting, the orchestra, the dancing, the set design… – everything was perfect.  I went in not really knowing the story of Hamilton (despite Ella talking about it non-stop for the past two years) and it didn’t matter at all, it blew me away.  10/10. 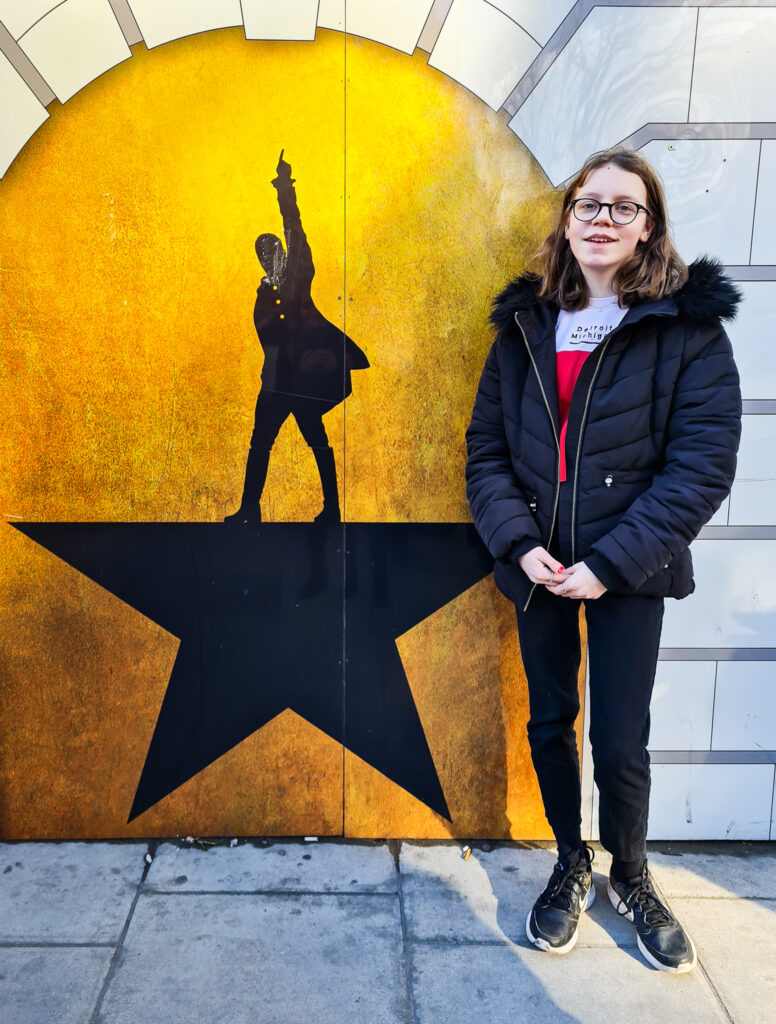 Outside the Victoria Palace Theatre 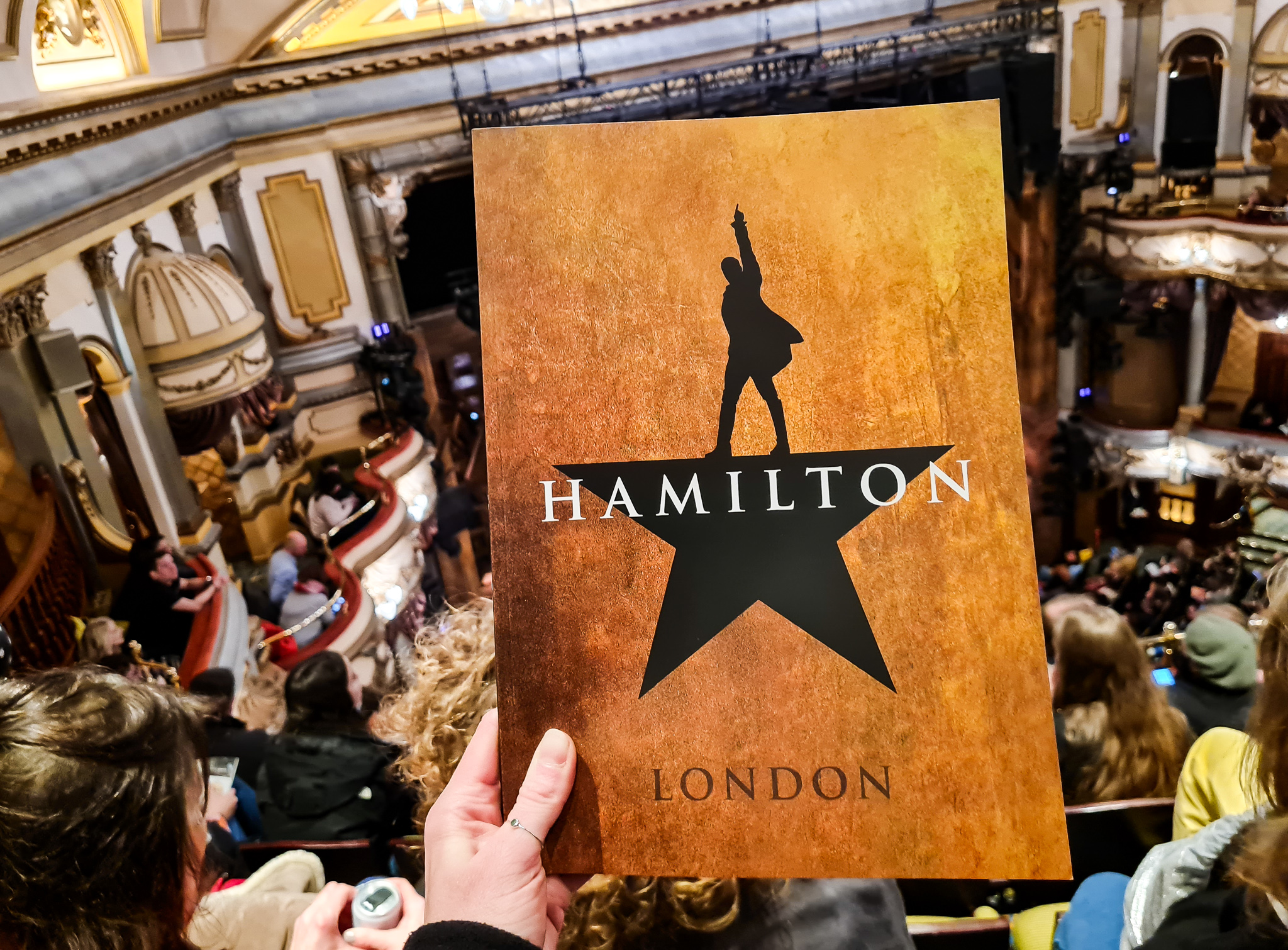 Waiting for the show to start – we had great seats and could see everything! 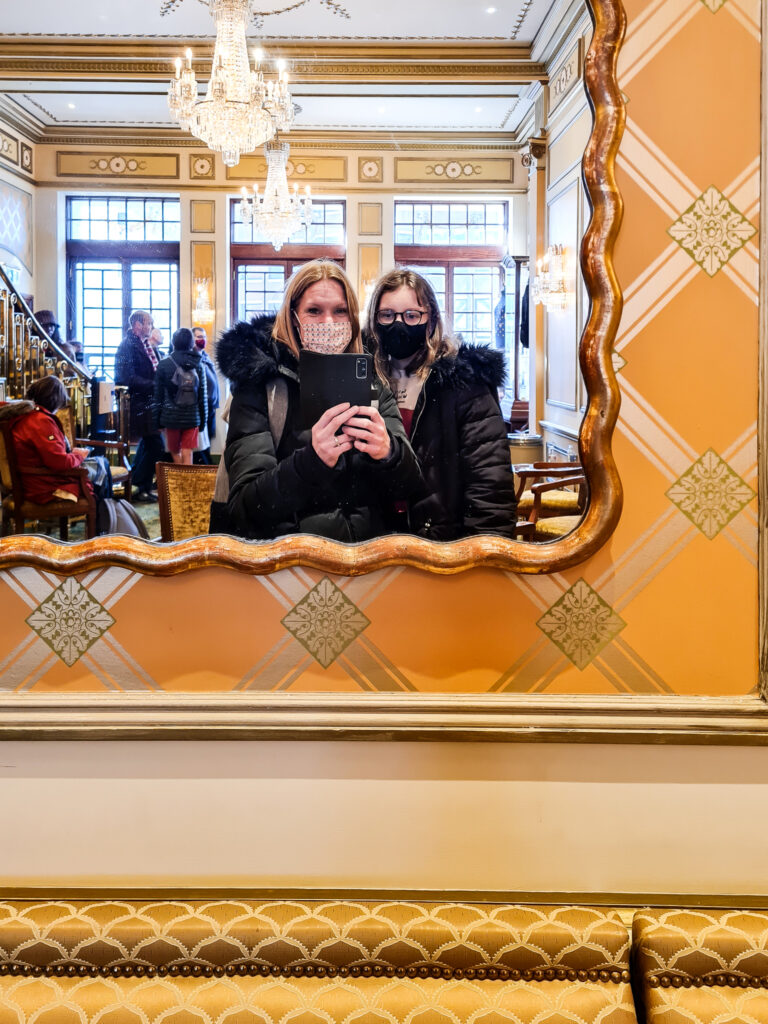 Convinced her to have a mirror selfie with me #soembarrassing

Hamilton:  On repeat.  All month.  Non-stop.  “Wait for it” is my favourite song I think, although it’s hard to pick just one!

Valentine’s window display:  Last year, in lockdown #3, we decorated our lounge windows with hearts for Valentine’s Day and I kept them up for ages.  I decided to do the same again this year too so the girls grabbed the coloured glass pens and joined in.  I love the heart shadows they make on the walls and the floor when the sun is shining.  It’s something quite small but it brings me a lot of joy. 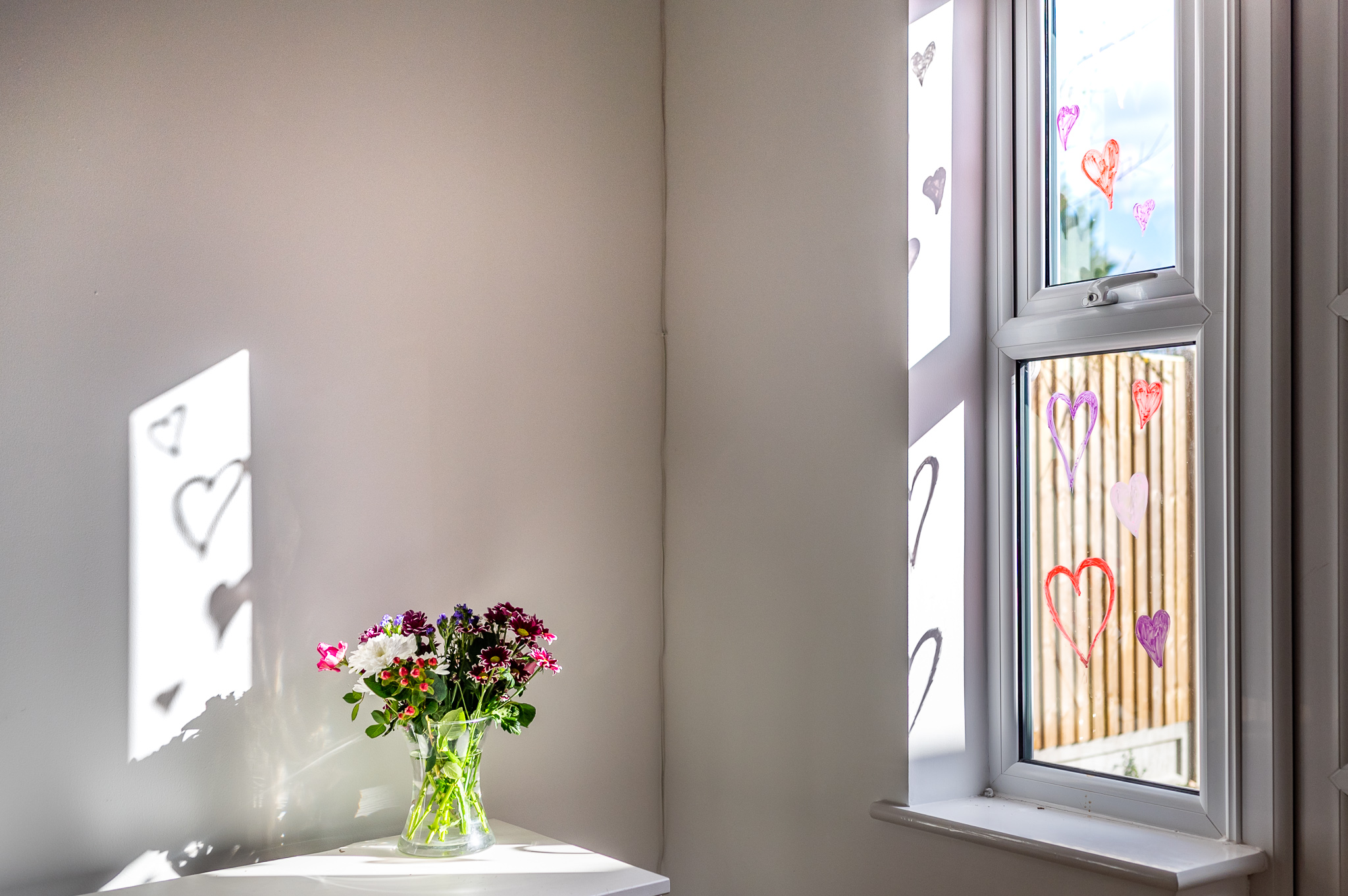 I love the heart shadows that appear when the sun comes out after I’ve decorated the windows.

It’s been such a mixed month weather-wise: so much rain; wild storms; mild days filled with sunshine… The duvet coat has stayed well and truly on though despite almost being tricked into believing that Spring had arrived a month early.

Half Term:  Other than Ella and I’s day trip to London, we really didn’t do very much in February half term.  I was working a bit.  The girls saw their friends a couple of times.  My Mum came up to visit.  It was really lovely to see her actually as we hadn’t seen her since New Year.  We went out for coffee and cake at a cafe in town.

I think I’m mostly glad to have the month over and done with.  The second chapter of 2022 is already at a close and I’m looking forward to the light returning and the fact that Spring really is just around the corner now.

I hope that you found plenty of little things to love throughout February and that March is kind to you.

February 2022: The Moments In Between

The End Of A Decade: Looking Back Over The Last Ten Years

2020.  The end of a decade and the start of a brand new one.  It feels…different somehow. I remember being sixteen years old at…