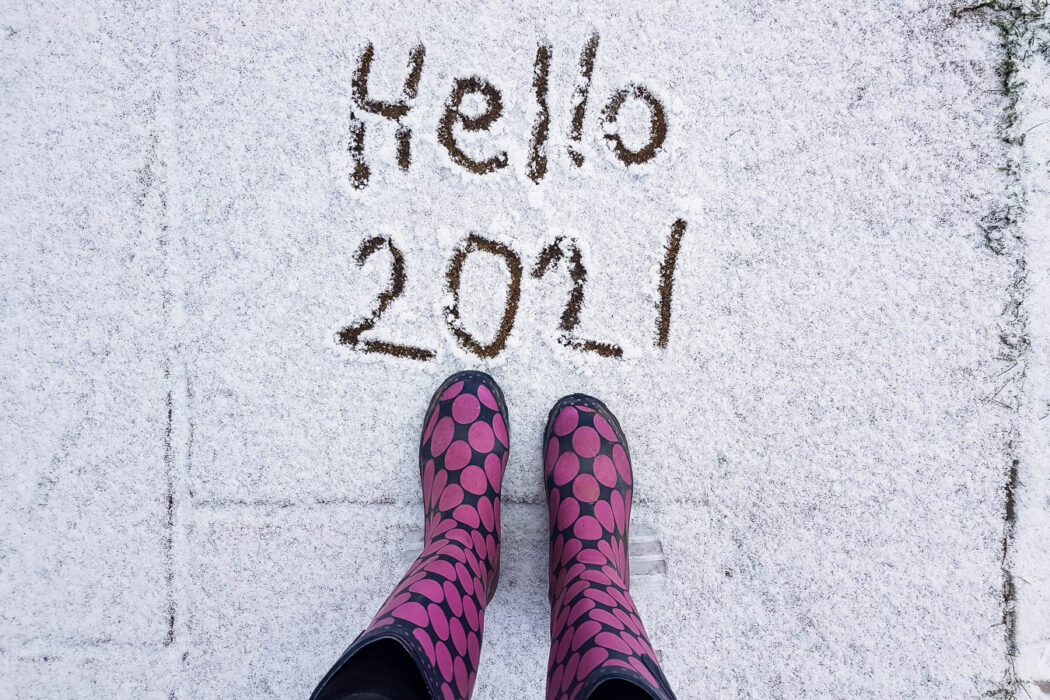 Hello 2021.  The start of a brand new year is usually full of anticipation, promise and excitedly scribbled down ideas & plans for the coming months.  Instead January began in much the same way as 2020 ended: lockdown number three.  Schools closed, shops closed, still unable to see the people we love.  It wasn’t what we’d hoped for but it was what we’d expected so onwards we continued, making the most of the good moments we created and clinging onto each other through the harder ones when it all got a bit overwhelming.

It’s been both a positive and challenging month in equal measure.  Positive because of birthday celebrations, my parents getting their first dose of the Covid-19 vaccine and snow days which definitely helped to lighten the mood when we managed to get out in it to play.  Challenging because of a broken boiler, a poorly cat and Neil’s Mum ending up in hospital twice (non-Covid related).  And in amongst it all were the tentative beginnings of modest home renovations, the ongoing homeschooling arrangements and working with my therapy clients.

I have a habit of wishing away the first two months of the year, desperate to get to Springtime and warmer, brighter sunnier days.  This year feels different.  It’s about keeping safe and well and appreciating the little things because you never, ever know.  The stories of people lost to Covid-19 are getting closer and closer to home.  So I squeeze my girls tight and curl up in bed with my husband and call my Mum and message my friends and feel grateful for the time we have, even if we’re apart.

This Detailed Life:  This was a Christmas present that I specifically asked for and I only managed to create time to read it at the end of this month!  ‘This Detailed Life’ is a fairly new magazine on the market (this is the second edition – I missed out on getting hold of a copy of the first one) – it’s full of absolutely beautiful images and it’s gorgeous quality too.

I loved Lisa Rogers’ article ‘Illuminating Photoshoots’ – a good reminder that whilst light is obviously key, the most important thing is highlighting the connection between the subjects being captured and also deepening the connection between them and the photographer.  The piece on moving to mirrorless was also super helpful – it gave me the push I needed to click ‘purchase’ on a rather exciting new toy!

The different themed collections of photographs showcased throughout the magazine are incredibly inspiring, particularly the ‘self’ section.  How people capture such extraordinarily stunning self portraits is beyond me.  The interview with Meg Loeks was fascinating too – I’ve been a fan of her art/work for years. 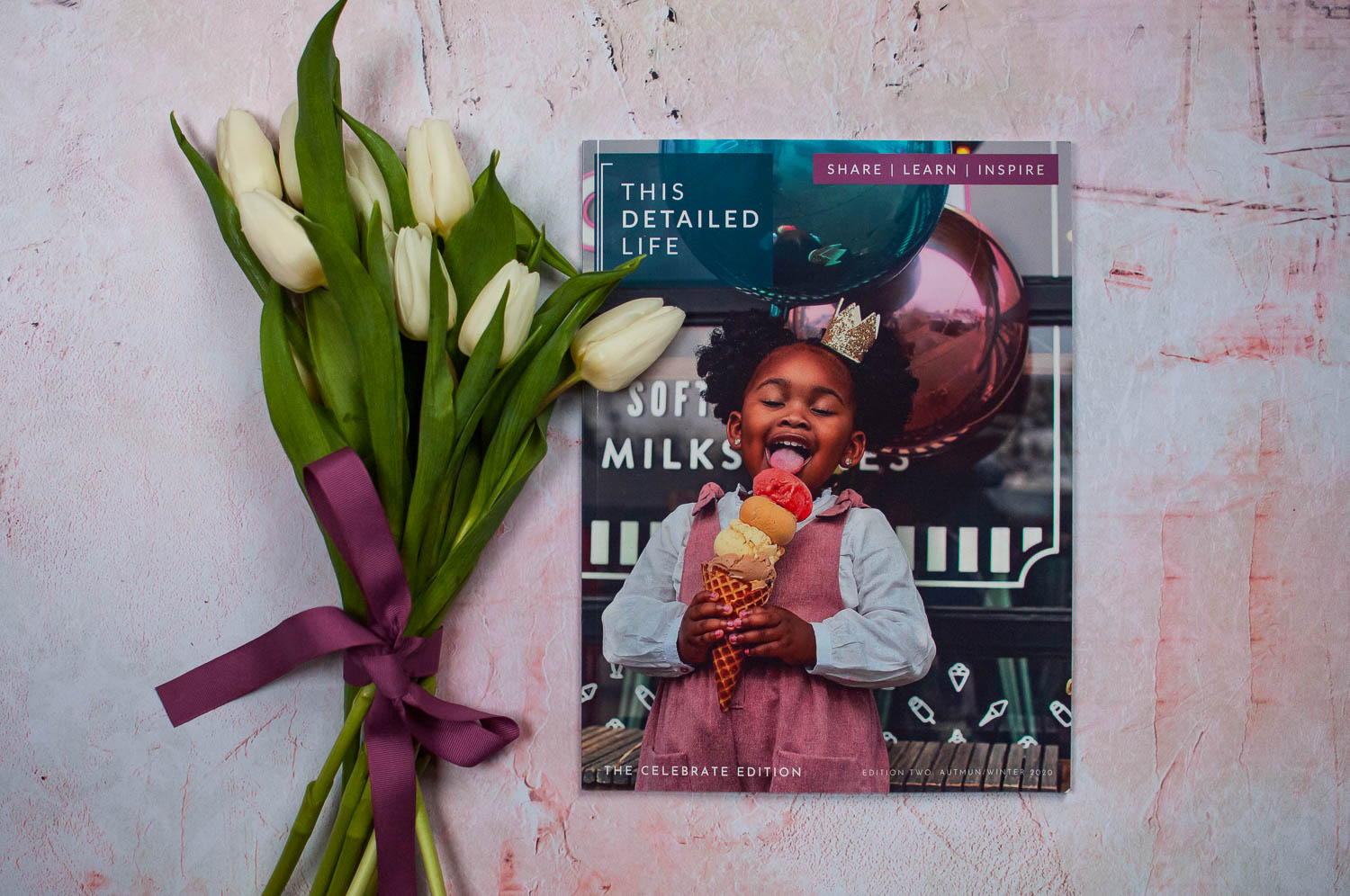 Lord Of Shadows:  I finished ‘Lord Of Shadows’ by Cassandra Clare in the first week of January and immediately began it’s successor ‘Queen Of Air And Darkness’.  It’s a big, chunky book – almost nine hundred pages in total!  I’m just over halfway through so far and am picking it up at every opportunity I get, working my way through a few chapters every evening.

I’m really enjoying this trilogy – The Dark Artifices – even more than the previous two Shadowhunters series I’ve read (The Mortal Instruments and The Infernal Devices).  It’s the most modern out of the three series and I feel more connected to the characters.  It’s full of action too and I have absolutely no idea how it’s going to end – I love not knowing how a book is going to finish!

Present-opening ceremony:  We make a big deal out of birthdays in our house.  Not in terms of going overboard with the number of gifts, or elaborate decorations, or four-tier homemade birthday cakes or anything like that.  More in terms of having little rituals that celebrate the fact that it’s that particular person’s special day.  Every word in every card is read carefully, each present is savoured whilst it’s being opened (after spending a while deliberating what might be inside first of course), everyone watches and the birthday girl has our full, undivided attention.  It’s almost turned into a sort of ceremony over the years and I love it – I love that they take their time and that it’s not all over in moments, I love that every gift matters so much to them, regardless of it’s size or who it’s from.

Making the girls’ birthdays special is so important to me, perhaps because when I was a child I remember feeling very special on my birthdays and I wanted to try and give them the same feeling.  It’s especially important for Lola’s birthday, which falls right at the start of January (meaning that often people forget about it, cards and presents arrive late because of bank holiday closures for the postal service, and many people are over celebrations by that point).

Lola was even more excited than usual about her birthday this year because this year she turned 11 which meant she got given a phone.  She had been counting down the days since about September – at some points I thought she was going to burst!  Seeing her joy (at all her gifts, not just her phone) was really heartwarming. 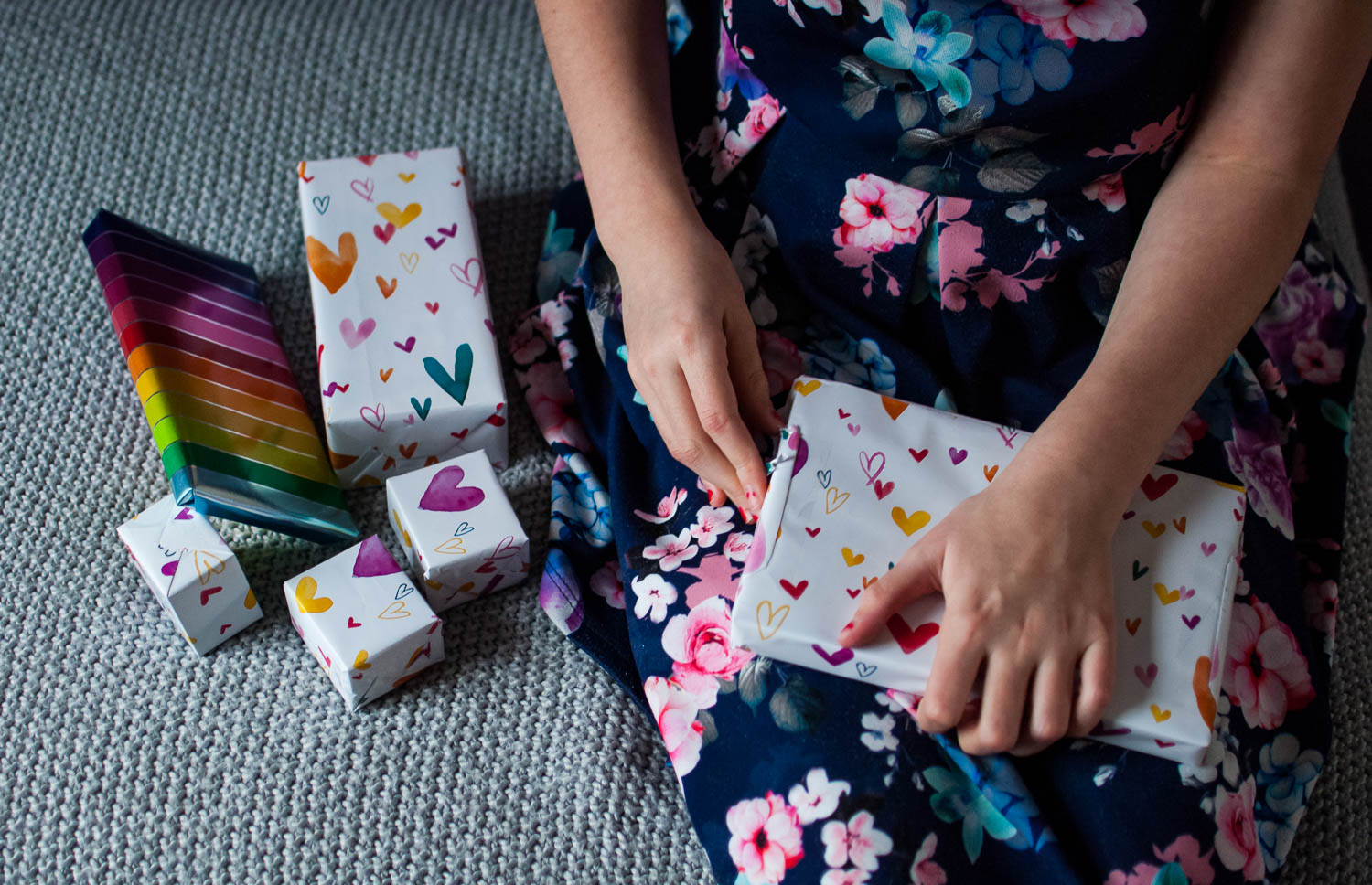 Shrieks of laughter:   We’ve had a couple of snowfalls in January and it doesn’t matter whether it’s a couple of flakes, a couple of inches, or up to our shins, Mimi and Lola are straight out the door and playing in it.  Ella needs a little more encouragement (she prefers to stay inside in the warmth and look at how pretty it is instead) but once all three of them are outside together, shrieks of laughter fill the air as they throw snowballs at each other, build snowmen and plot how to sneak up on and attack their Dad before he notices them. 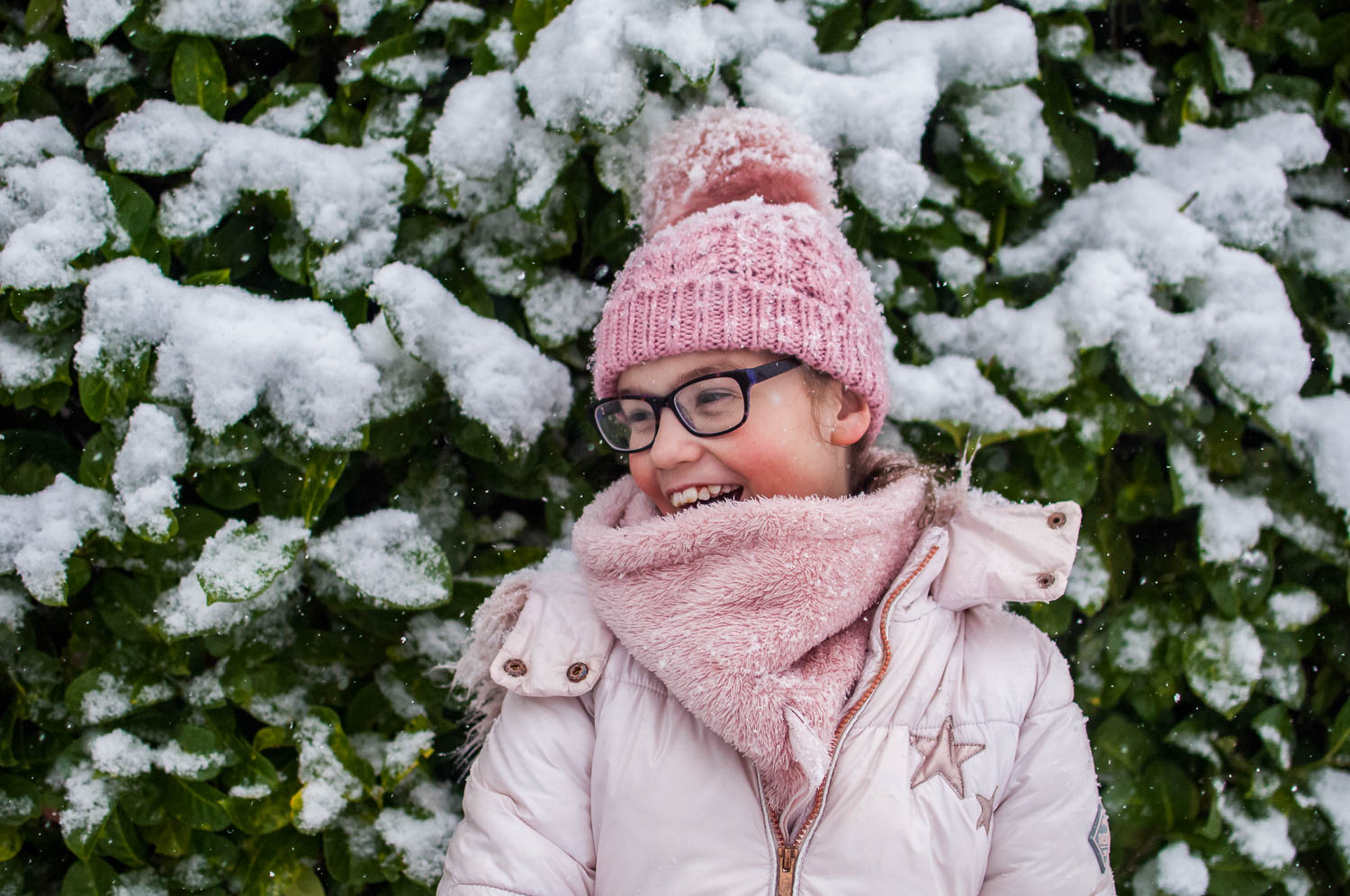 We’ve had a couple of snowfalls this month and each time it happens the girls rush outside to play.  I love this photo of Lola – her little pink cheeks match her outfit!

Birthday cupcakes:  For Mimi’s birthday in May last year, her best friend Ava brought round some homemade cupcakes as part of her birthday gift and they stood for ages on the doorstep having a socially-distant chat.  Ava’s birthday is in January so Mimi decided she wanted to return the favour!  She and Ella spent the afternoon baking chocolate cupcakes all by themselves – I didn’t have any input at all.  They decorated them with blue vanilla icing and we took them round for a socially distanced drop-off that same day.

I sat in the car and read my book whilst the girls caught up, having not seen each other since they were last at school before Christmas.  They were stood in the freezing cold for almost an hour, one on each side of the driveway, just chatting.  I didn’t have the heart to pull Mimi away.  Not seeing their friends really is having a big impact on the girls – more than we realise I think – so I’m glad we were able to do this. 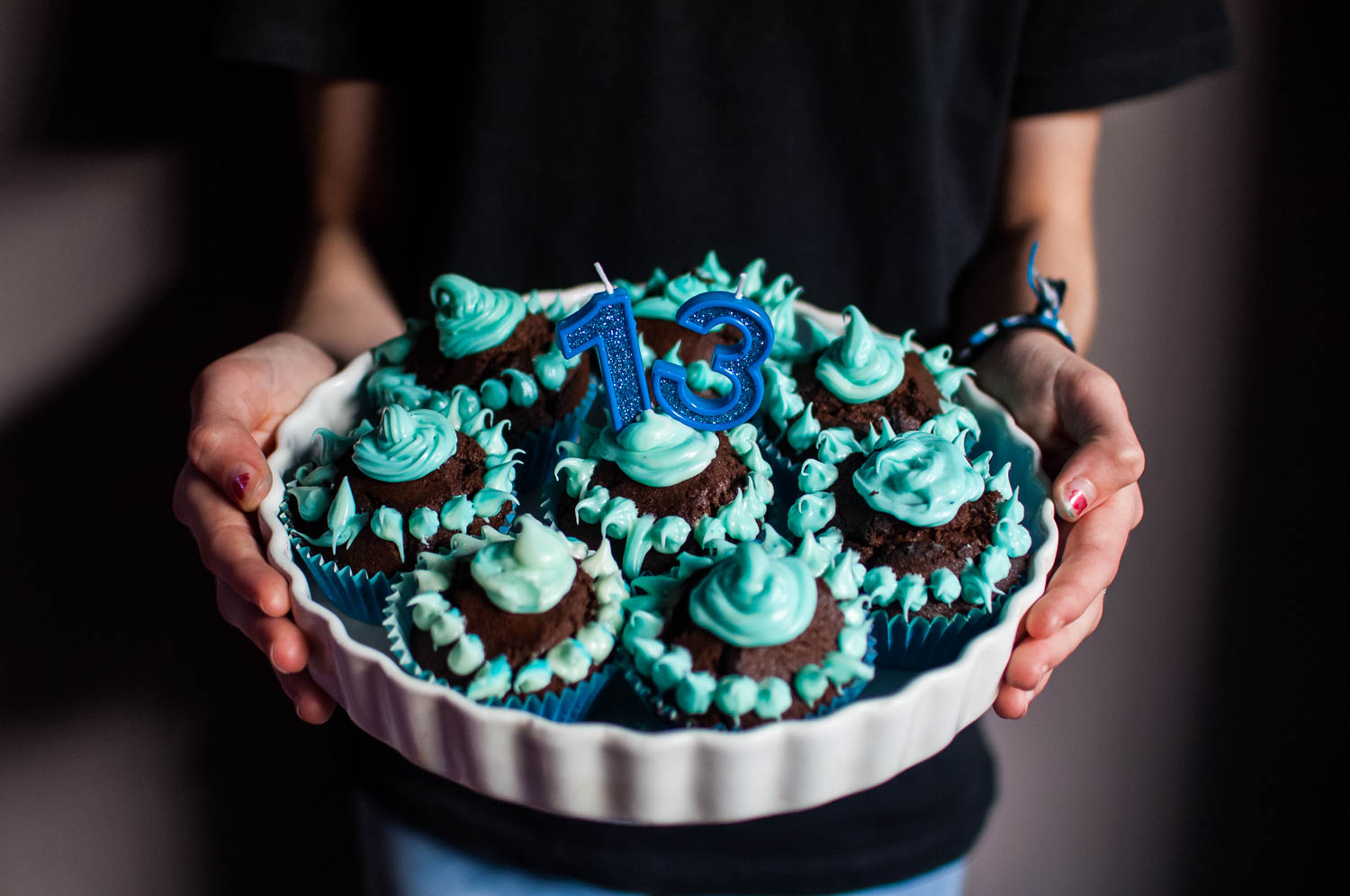 Friendship bracelets:  My parents gave Lola a friendship bracelet kit for her birthday so she’s been busy making those during rainy weekends and after homeschool has finished for the day.  Lola has given one to all of us and she’s made one to give to her best friend at school as well (as soon as she’s allowed to see her again anyway).  I remember loving making these when I was a kid too, so when we were doing it together it brought back some memories.  At the moment we’ve stuck to the most simple, plaited option but we’re going to tackle the more complicated designs soon too – as soon as we get some more coloured thread! 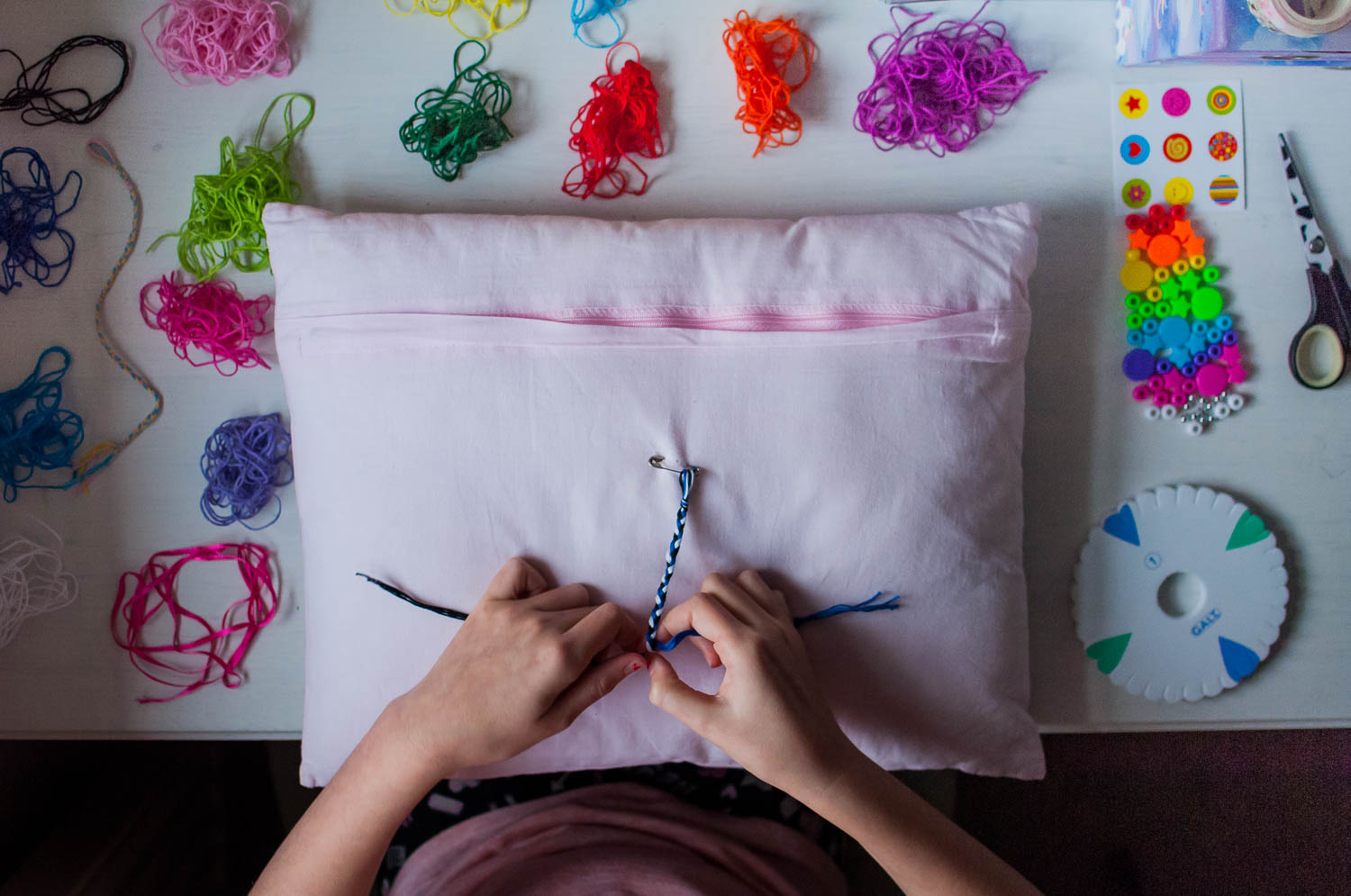 Lola making friendship bracelets – all of us have one now!

Travel vlog:  I managed to create the time to edit together a little video from our last minute trip to Bude in Cornwall during October half term.  I still feel so grateful we had that opportunity to escape to our happy place by the sea in between lockdowns, even if it did rain pretty much the whole time we were there.  I love looking back at all the memories we’ve made from our stays at The Beach Haven and hope we can make even more this year if travel restrictions ease.

If you want to see more of the videos I make from our travels, hit the ‘subscribe’ button on my YouTube channel (and thank you in advance!).

All the layers:   Our boiler broke down at the start of the final week of January, leaving us without any heating for six days and no hot water for four days during some of the coldest and wettest weather we’d had so far this month.  It was FREEZING!  We basically wore all the clothes we owned all at once (the fluffy Christmas socks even made a reappearance) and the girls valiantly carried on with their schoolwork wrapped in blankets and cuddling hot waters bottles as well, bless them.  Thankfully our boiler has now been repaired and I’m never going to take a warm radiator or a hot shower for granted ever again.

Lola’s 11th birthday:  Lola officially declared her birthday “the best birthday EVER” because not only did she get given a phone, we’ve also promised to take her to get her ears pierced once lockdown is over, she had a kittycorn (cat/unicorn) birthday cake, we ate pizza for dinner and it snowed!  I don’t think she stopped smiling all day. 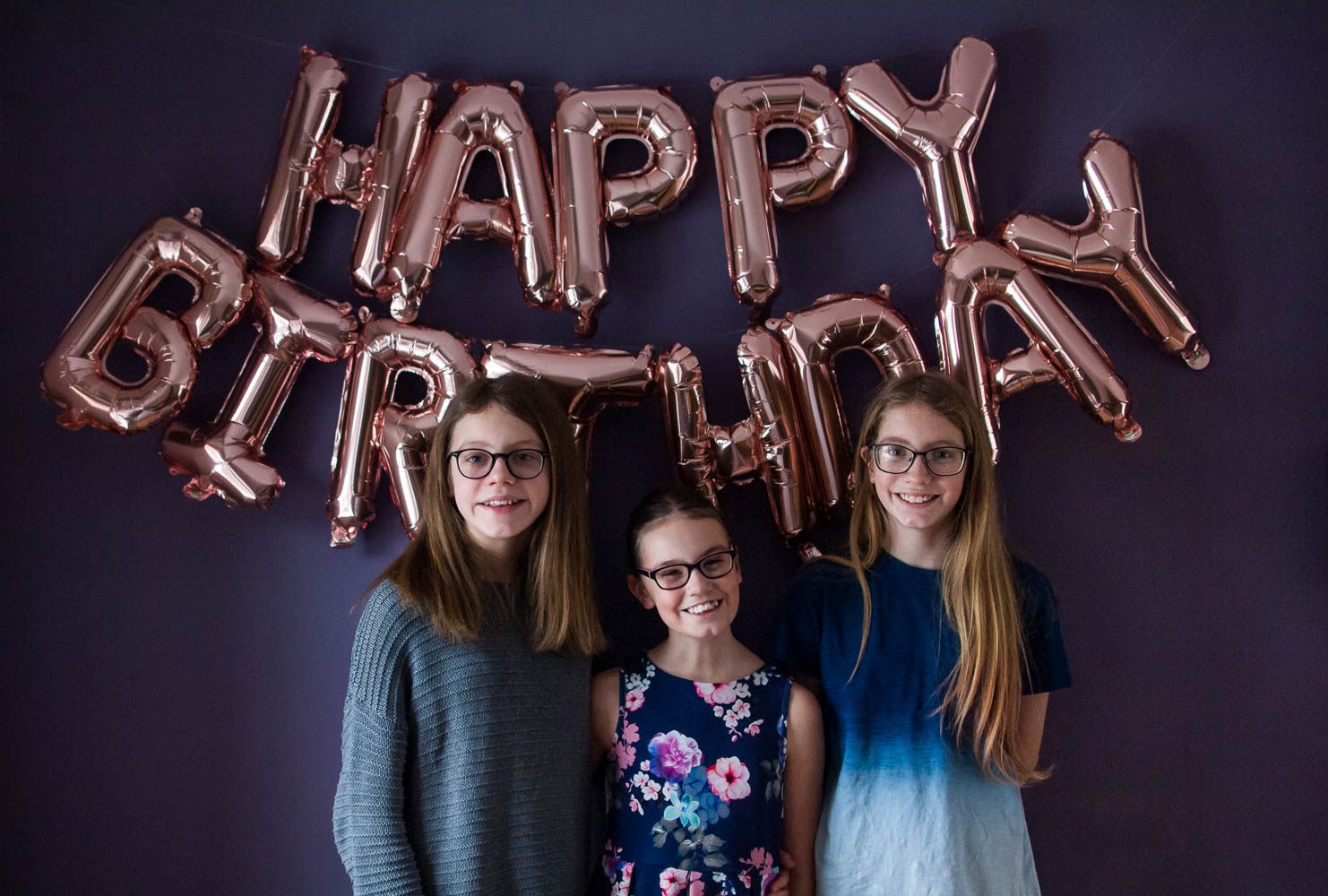 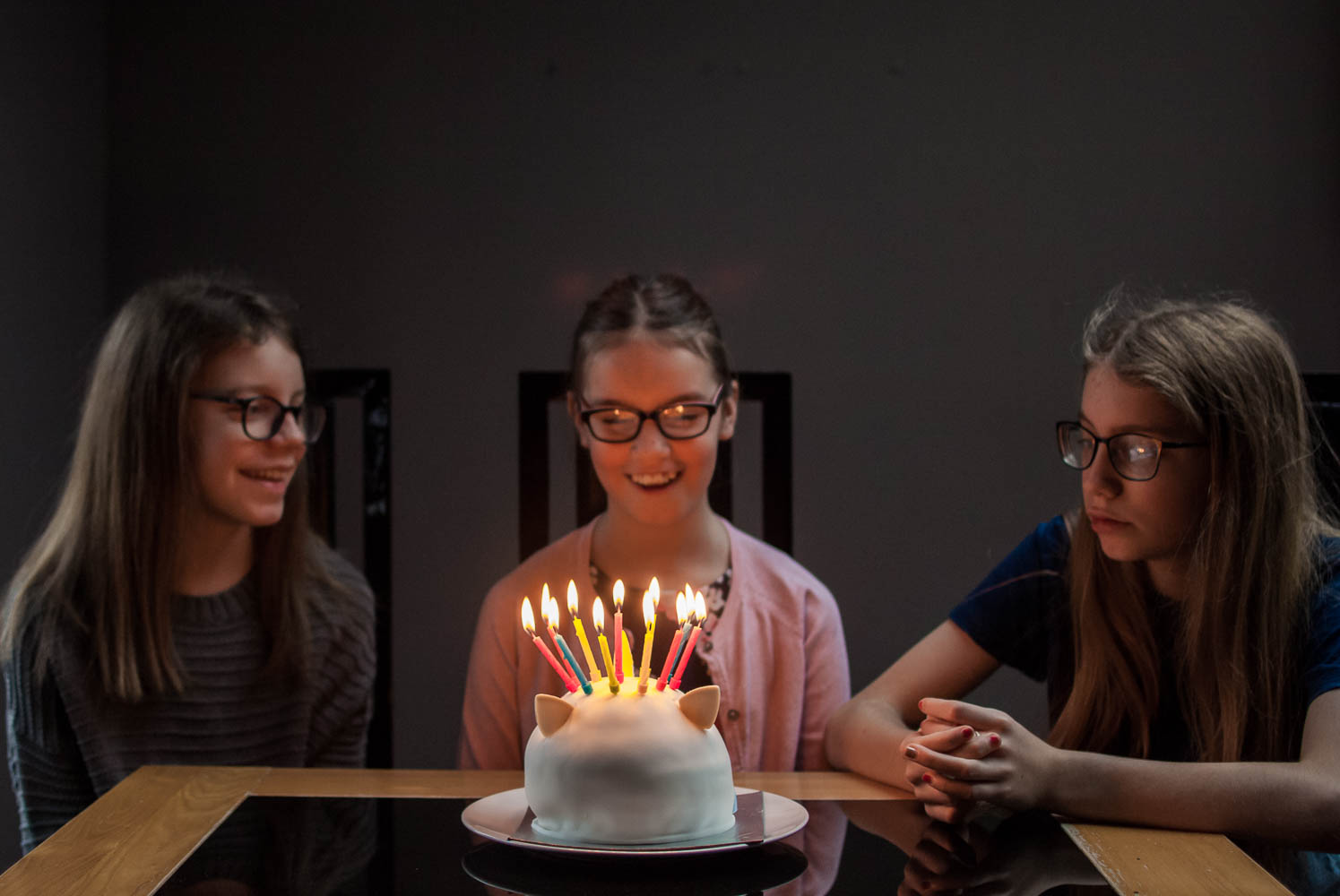 Overcoming fears:  We never usually use the fireplace in our lounge (in fact, we forgot we even had it until three days into having no heating!) because Lola is terrified of anything to do with flames since the fire in our kitchen at our old house two years ago.  She doesn’t even like having candles on her birthday cakes very much and always sits as far away from them as she can.

We were all cold down to our bones though, so my husband lit the fire and we encouraged Lola to come in and sit with us for a short while.  After a day or so of practicing and edging a little bit nearer each time, she proudly announced that it had helped her overcome her fear! 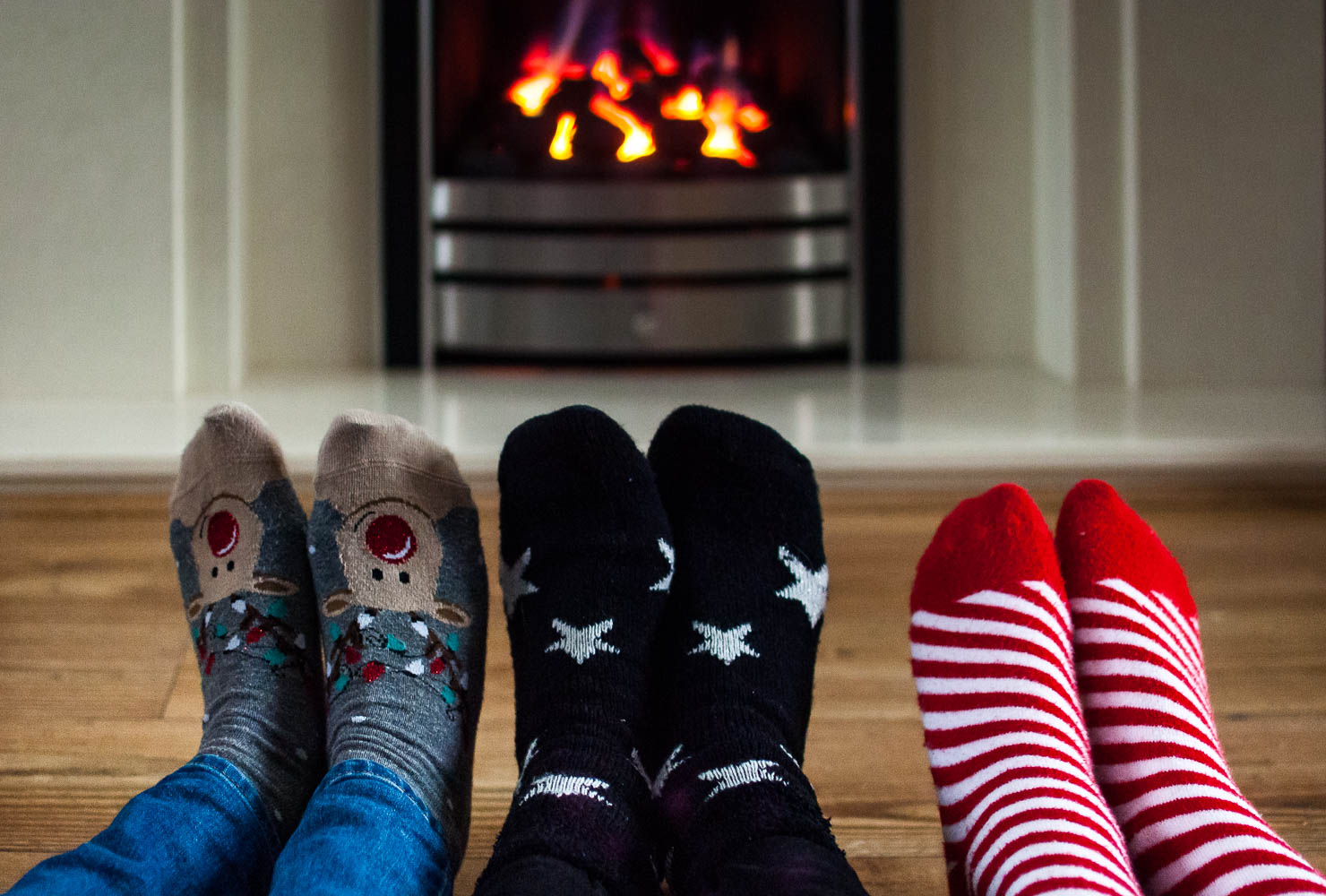 House projects:  We’ve gradually been starting to get a few things done around the house.  An electrician has been in sorting out the ‘interesting’ lighting configuration we inherited when we moved into this house just over a year ago and next month we’re hoping for plastering and painting to be done. There isn’t a single white wall in this house – not one! – and it’s driving me mad.  We have lots of ideas and plans for what we might like to do, now all we need to do is save up so we can do it.

The first chapter of the year is over and from talking to various people it seems that we’ve all found it pretty tough.  That’s why I love pulling these Little Loves posts together so much because each one really does remind me of just how many good and positive things there have been in between the trickier times.

I hope that 2021 has started off in the best of ways for you all, and that you’re doing ok in the face of everything.  Sending love out to anyone who needs it and I hope that February is kind to you all.

Joining in with Sincerely Anna and #LittleLoves)

January 2021: The Moments In Between