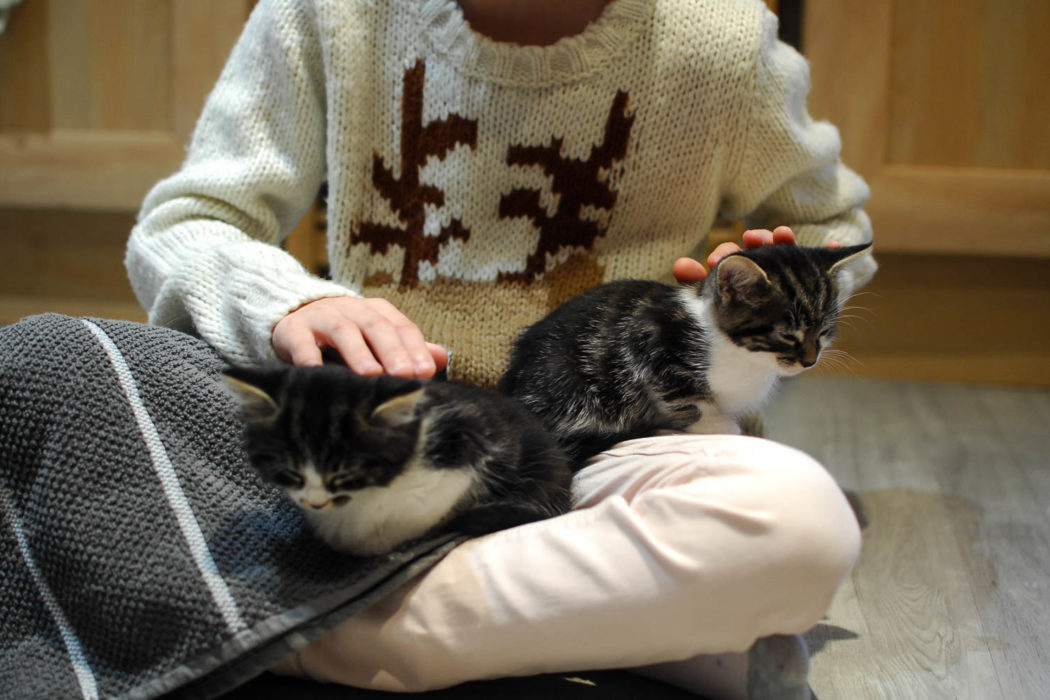 Just over a week ago we welcomed two tiny new members into our family.

No, I’ve not had a well-hidden pregnancy that I’ve kept secret from everyone and no, we’ve not adopted.  Well, not human babies anyway…

After we lost our boy, Pumpkin, we were all devastated.  We still are.  Not a day goes by that I don’t think of him; or catch a glimpse of him out of the corner of my eye; or hear him mewing outside the front door asking to come in.  I still say hello to him when I get home after being out, even though I know perfectly well that he’s not going to come trotting down the stairs to greet me, and his blanket still lies at the end of our bed – his favourite place to sleep.

The day after he died, in the midst of the immense shock and all the tears, Lola innocently asked if we could get a new cat.  She has the biggest heart of any child I know and she needs somewhere else to direct all her love now that Pumpkin isn’t here.  I cautiously replied that we would probably wait a little while – firstly we needed to get Pumpkin’s ashes back from the vet and secondly, none of us knew what it was going to be like not having him around and I didn’t want to get her hopes up by promising something that I wasn’t sure I’d be able to cope with delivering.  We’d only had Pumpkin for two years but in those two years he’d left his pawprints firmly on our hearts.  It was going to take a lot to adjust to him not being here.

But secretly inside I think we all already knew that we would get another cat – it was almost an unspoken agreement.  Not an ‘if’, more of a ‘when’.

It quickly became apparent that the house just didn’t feel right without a feline presence.  It’s felt so empty without him around and that void has been excruciating.  It was hard enough having a hole in our hearts where he had been, none of us were dealing very well with having what felt like a huge hole in our home too (the husband and I in particular).

We talked about it over and over, making sure that we were all clear that if we did get a new cat it wouldn’t in any way be to replace Pumpkin.  He’s irreplaceable, one of a kind and will always live on in our hearts.  It wouldn’t be to fill the hole he left either.  It would be more a way to help us through our grief and sadness by giving ourselves something positive to focus on.

And so, as a result I tentatively looked on our local Cats Protection League website, just to see what they had available, reasoning in my head that there probably wouldn’t be anything.

How wrong could I be?

Three litters of kittens stared back at me from the website, all equally cute.  The first a trio of grey tabbies with the saddest eyes I’ve ever seen; the second a pair of slightly older black and whites; and the third a set of four more grey and white tabbies, absolutely dinky in size.  We talked it over as a family, I called the number and put our names down, and then we watched anxiously as kitten after kitten had ‘reserved’ added after it’s name as the days went by.

Eventually we got a call last Monday to let us know that three out of the four kittens in the last litter were still available – two boys and a girl.  Not wanting to risk someone else getting them first I went to look at them the very next day and instantly fell in love. 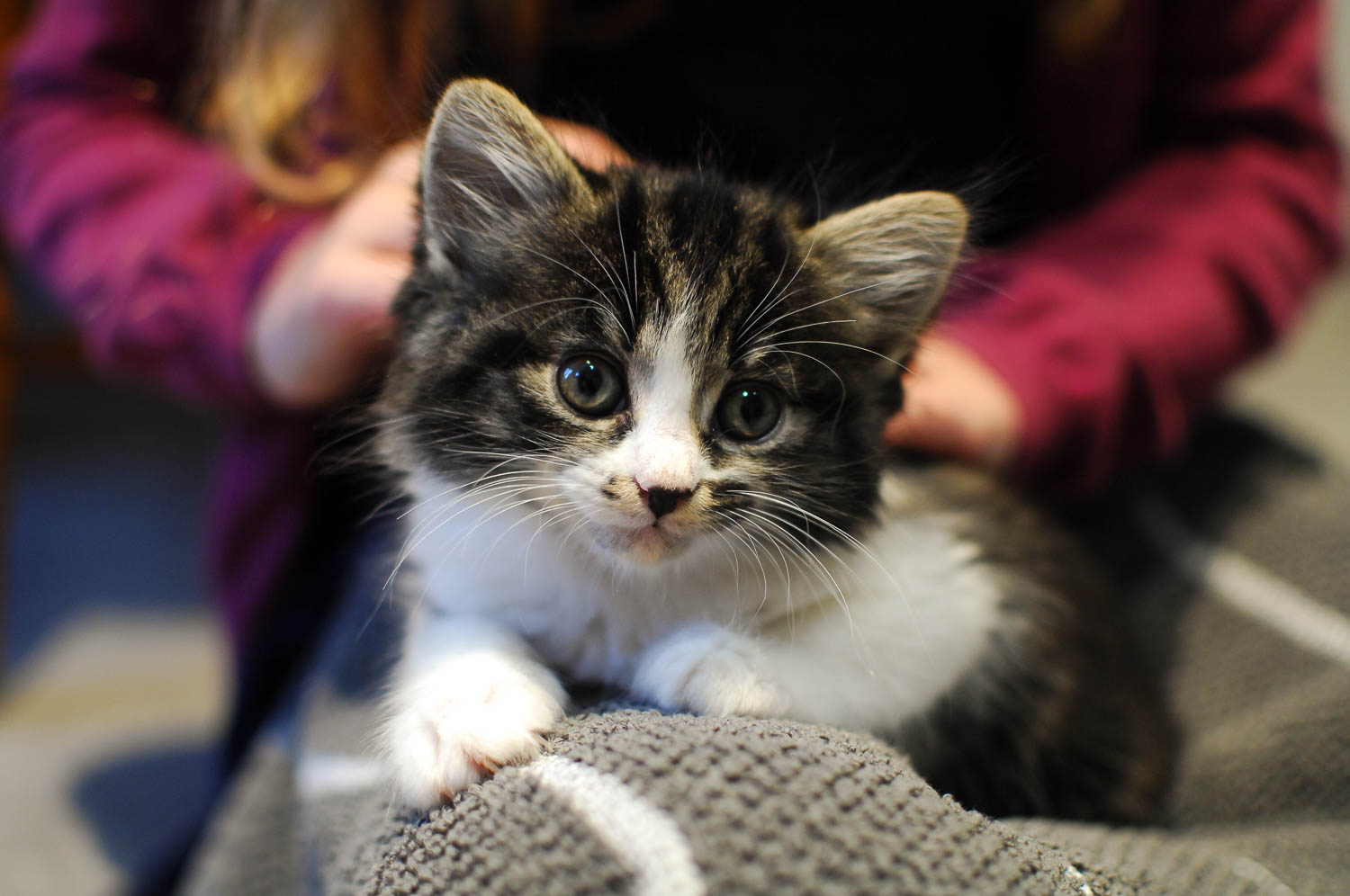 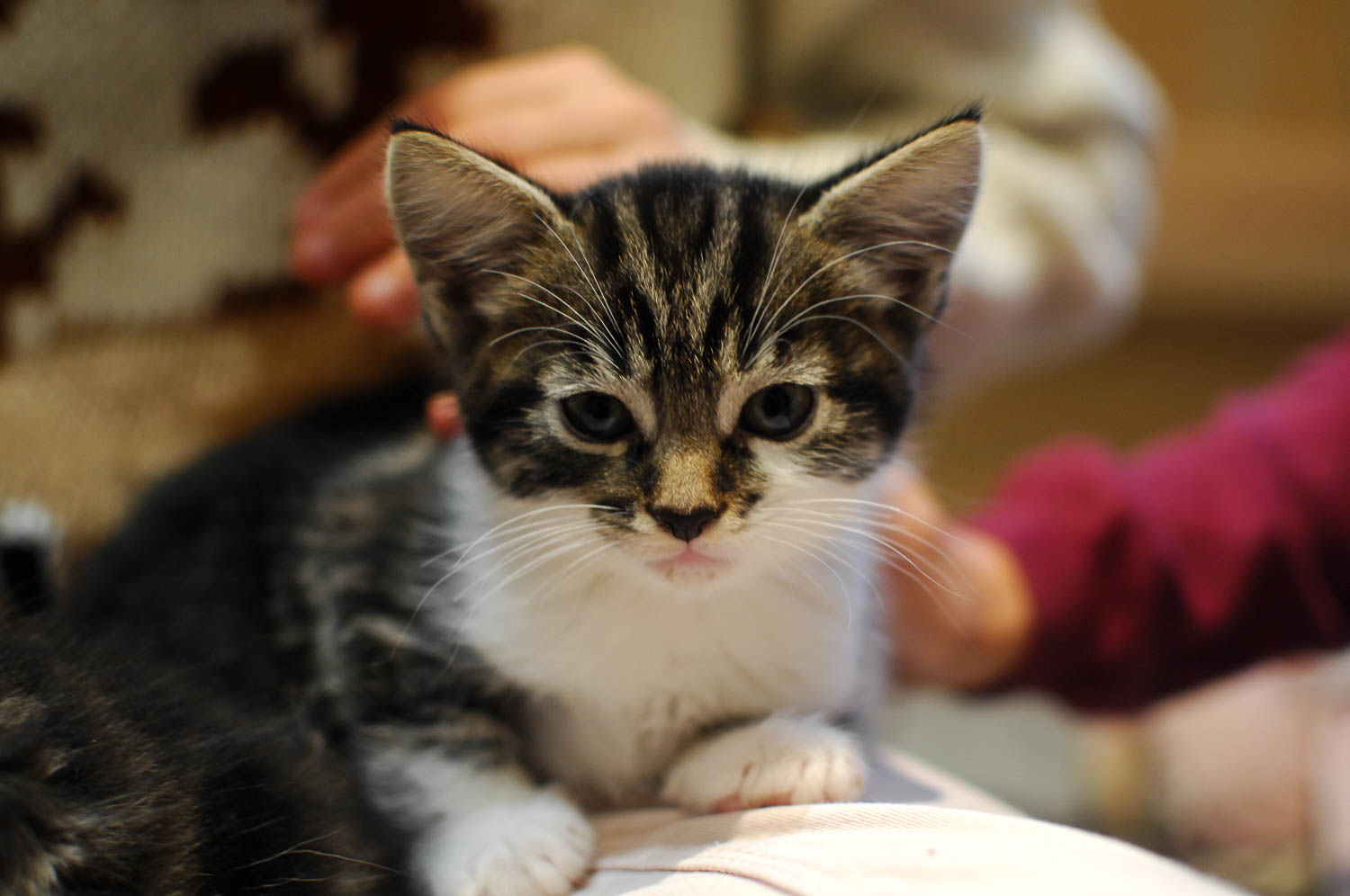 They were eight weeks old, feisty and tiny, with soulful grey eyes.  I reserved the girl and one of the boys on the spot and to cut a long story short we brought them home just two days later.  The girls are absolutely thrilled and I think the husband has already got a serious soft spot for them.

There was a bit of debate about names before we eventually settled on a Harry Potter theme.  I was adamant that I wanted Luna for the girl, after Luna Lovegood.  I think her character is ace – she is completely herself at all times, doesn’t care what anyone else thinks of her and just wants everyone to be kind to each other.  We considered Neville for the boy (after Neville Longbottom, who is loyal and brave and gentle – also one of my favourite characters from the books), but I just couldn’t bring myself to imagine calling “Neeeeeevvviiiiiiille” out of the front door!  We went through pretty much every character we could think of, but nothing seemed right.  As a little girl I desperately wanted a cat called Felix, like in the cat food adverts.  It seemed such a shame there’s no character in Harry Potter called Felix, otherwise it would have been perfect.  And then I remembered that in the sixth book, ‘The Half-Blood Prince’, there is a potion called ‘Felix Felicis’, which brings good luck.  And that was it, decision made.  Luna and Felix it is and I think they suit them perfectly. 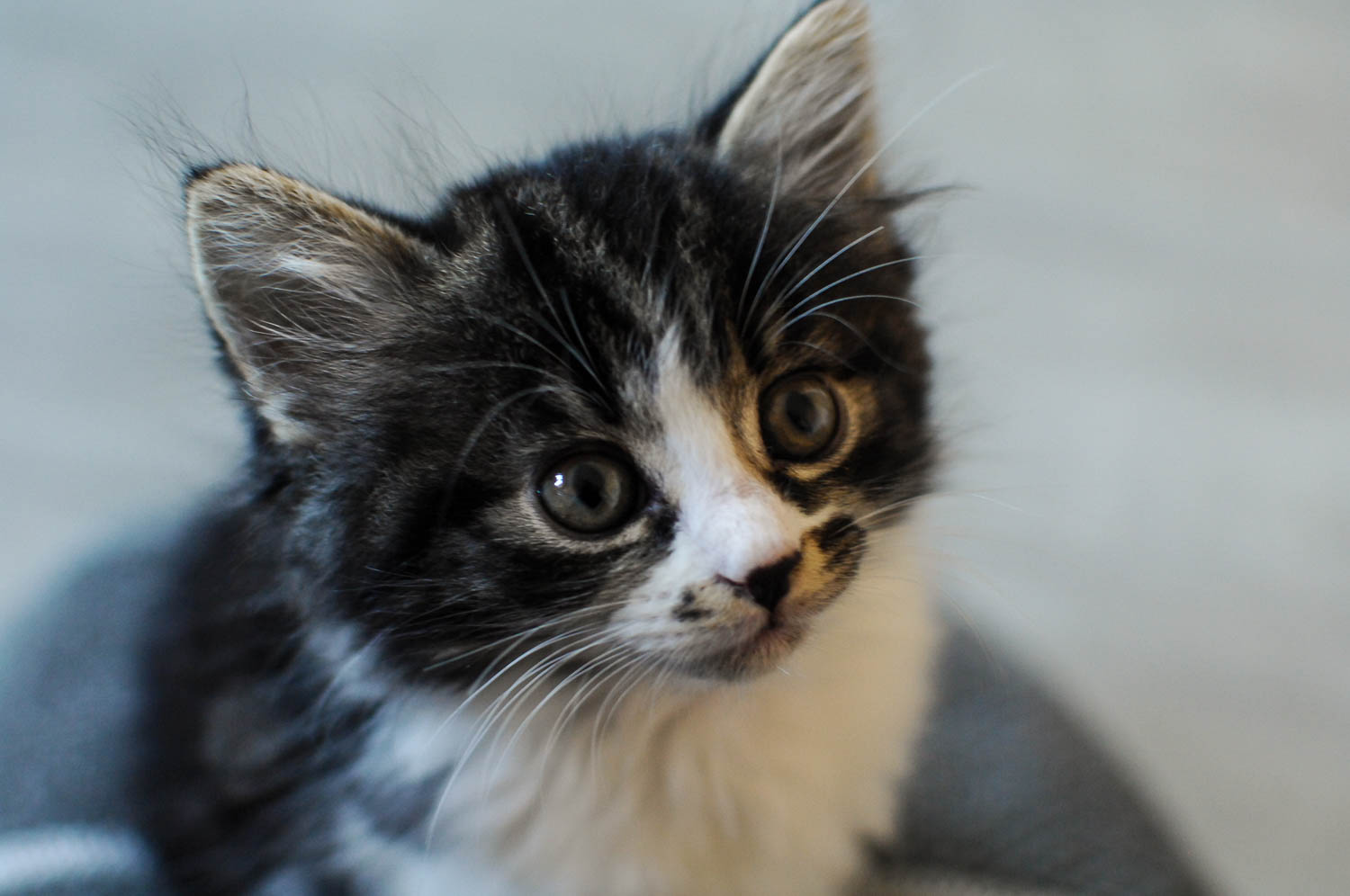 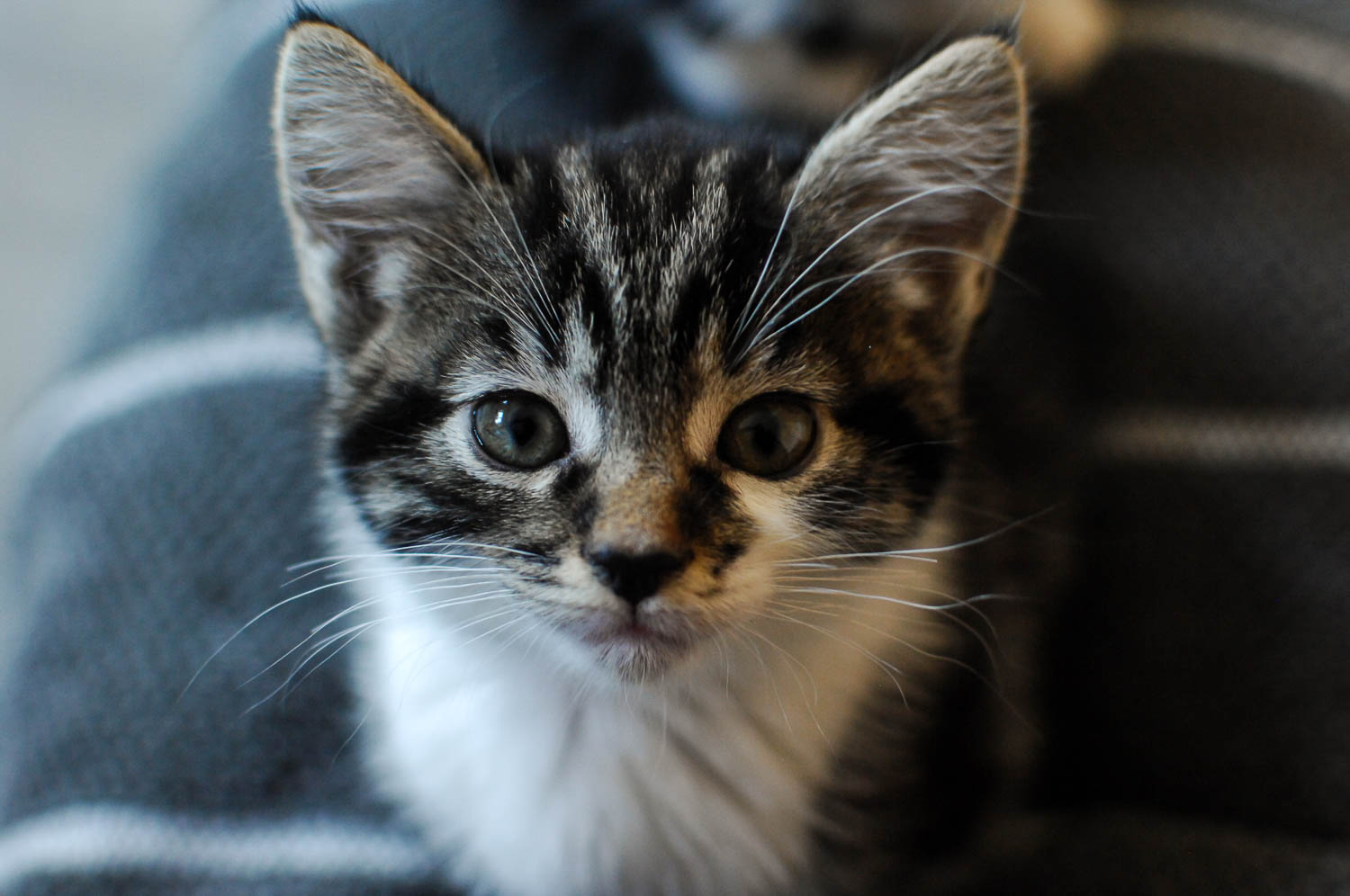 They’ve been with us for just over a week now and we’re all completely smitten.  They have slotted straight in to our little family and already seem to have grown quite a lot.  They each have their own little personalities, which we’re starting to get to know.

Luna is partially long haired – she’s fluffy and cute on the outside but she’s definitely strong and determined – she’s the one who usually instigates wrestling matches with her brother.  She’s a little more wary of new things, but will absolutely creep up onto your lap for a cuddle when she decides she wants one.

Felix was the smallest kitten out of the litter of four but what he lacks in size he more than makes up in confidence.  He doesn’t hesitate to investigate anything new, is incredibly persistant when it comes to scrambling up me no matter how many times I tell him “no!”, has a purr that sounds like a motorbike revving it’s engine and is definitely the risk-taker out of the two.  However, he is also the cuddly one and will happily fall asleep in my arms, his little, soft, sigh-snores melting my heart with every breath. 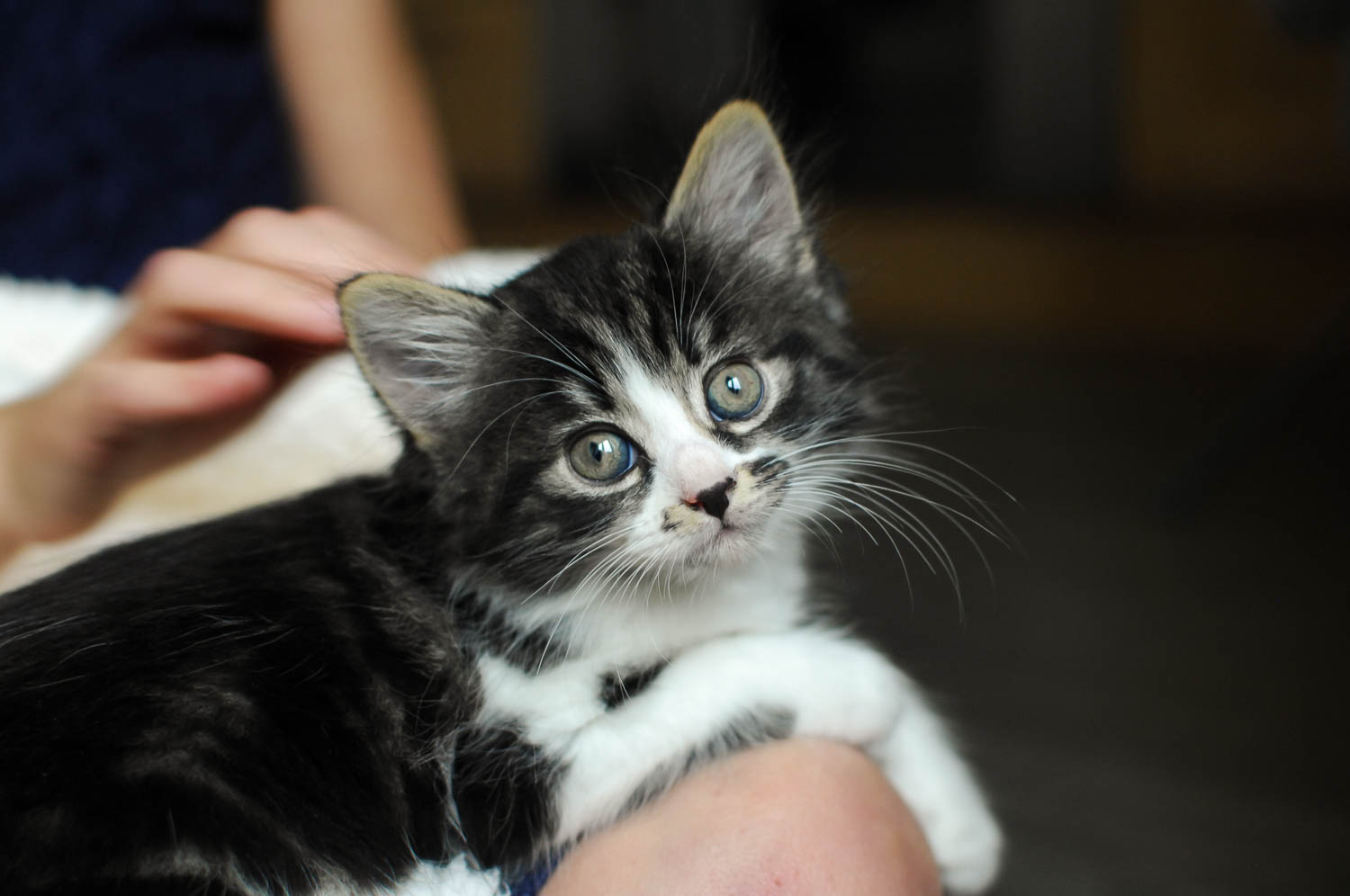 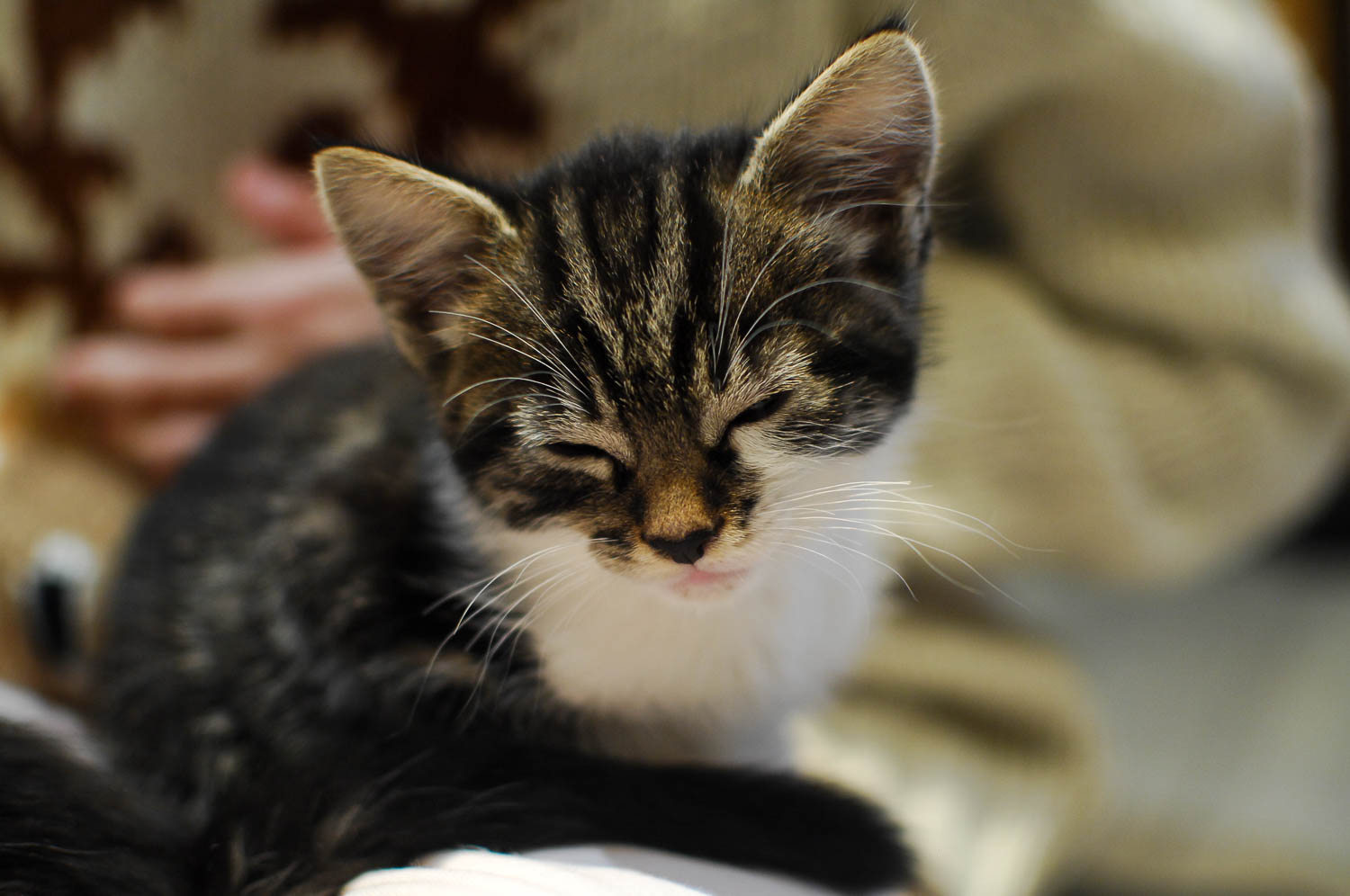 Their mews currently sound like little, squeaky rubber ducks but oh boy are they loud when they want to be – they certainly make their presence known.  It feels like we have newborns again – their daily routine is eat, poo, play, cuddle and sleep (on repeat).  They are constantly hungry and scramble up my legs at every single opportunity – I am literally covered in claw marks.  It’s hard work at times but it’s completely worth it when I see the girls’ faces light up when the kittens come running over to them or when they settle in their laps and start purring.  They’ve already bonded with them and utterly adore them – I know we made the right decision. 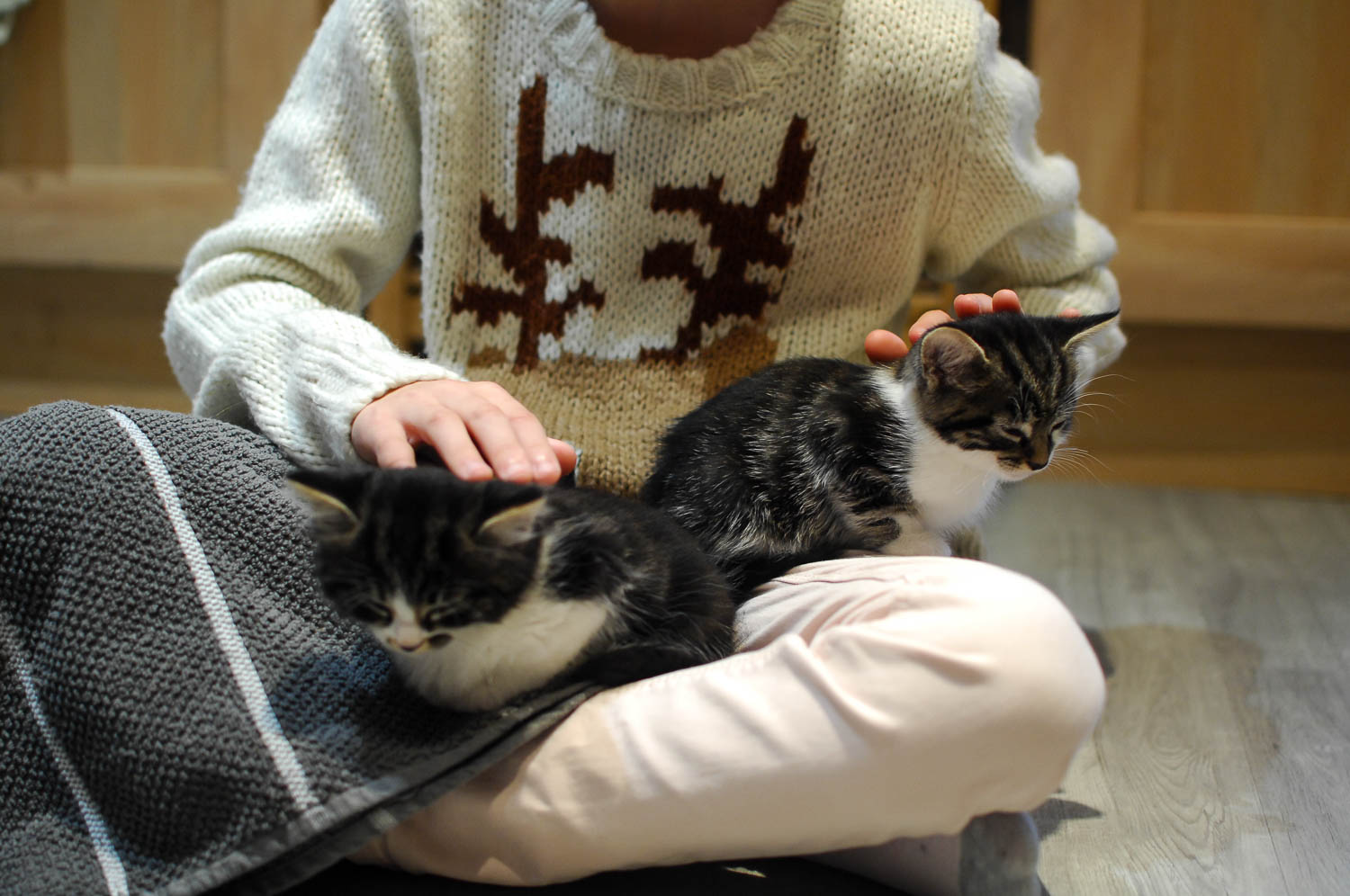 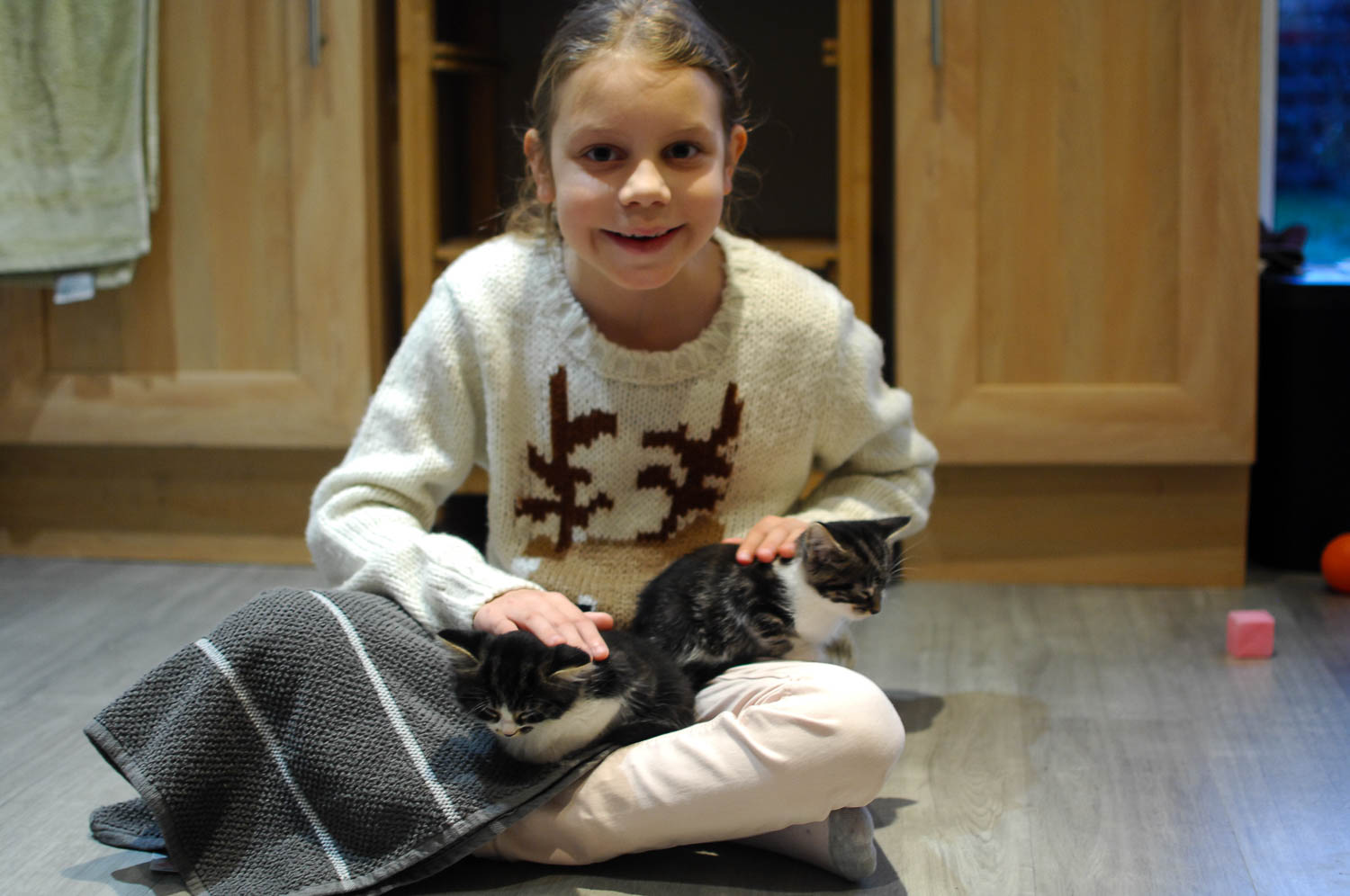 Look how happy she is! 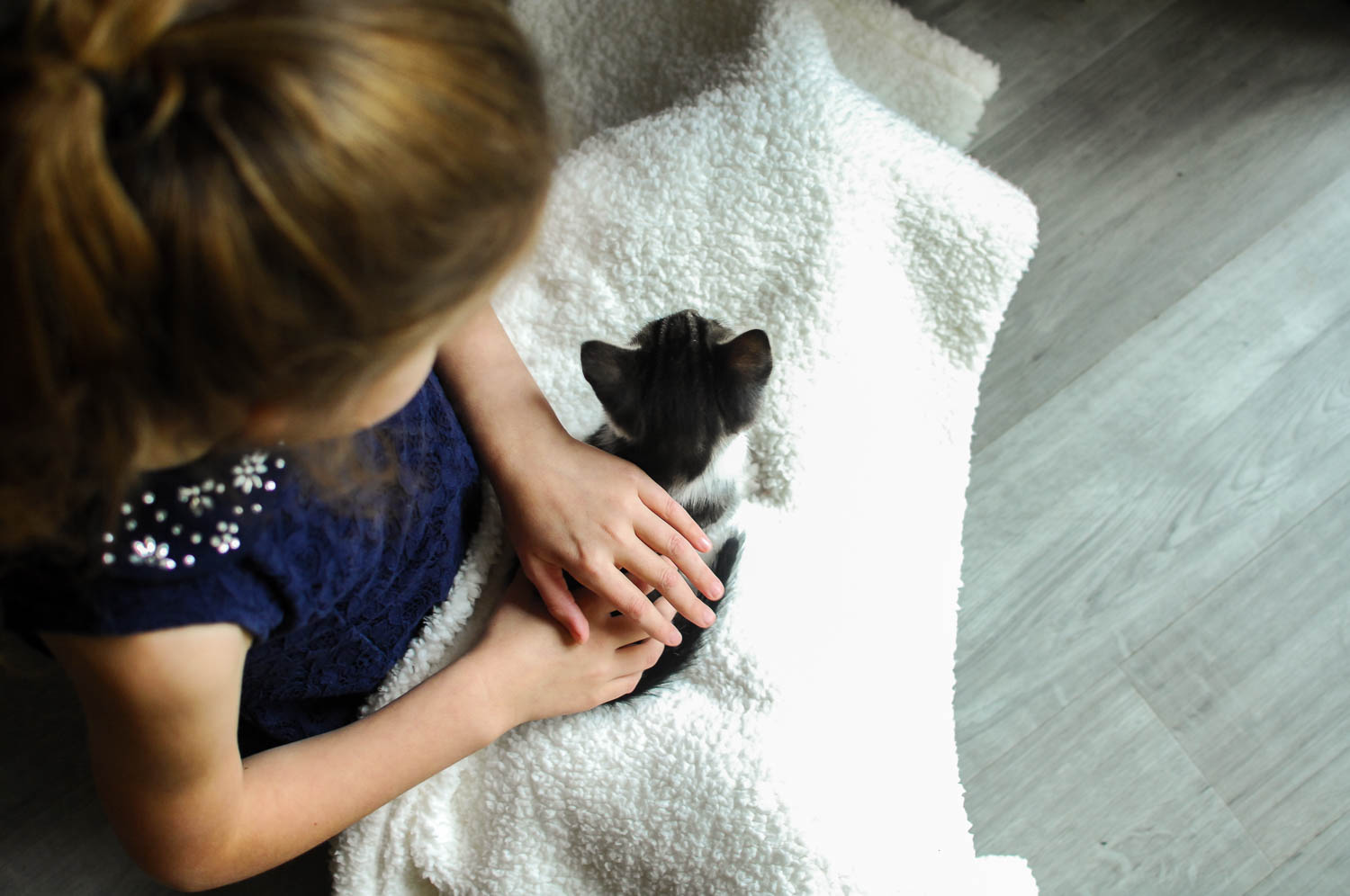 We’ve had some well-meaning comments about it possibly being too soon to get new cats after losing Pumpkin and I do completely understand (and respect) those opinions and the intentions behind them.  We’ve just done what feels right for our family.  And honestly, I don’t think there is ever a ‘right’ time for so this sort of thing – you just have to follow your heart and make the choice that it leads you to.  We did exactly that and I’m really glad we did – these little cuties have already become a part of our family. 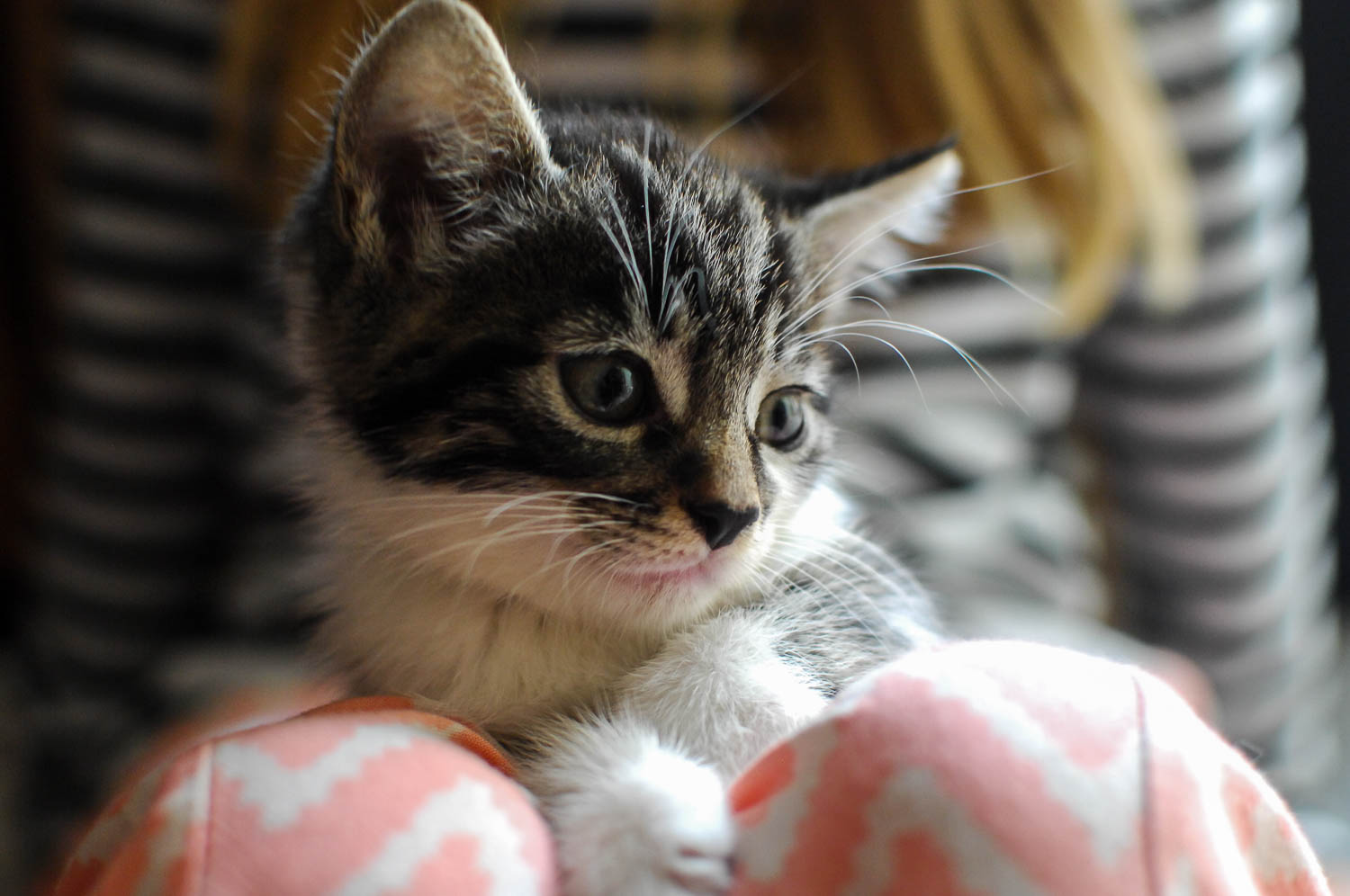 Felix in a cuddly mood, sitting on Mimi’s lap 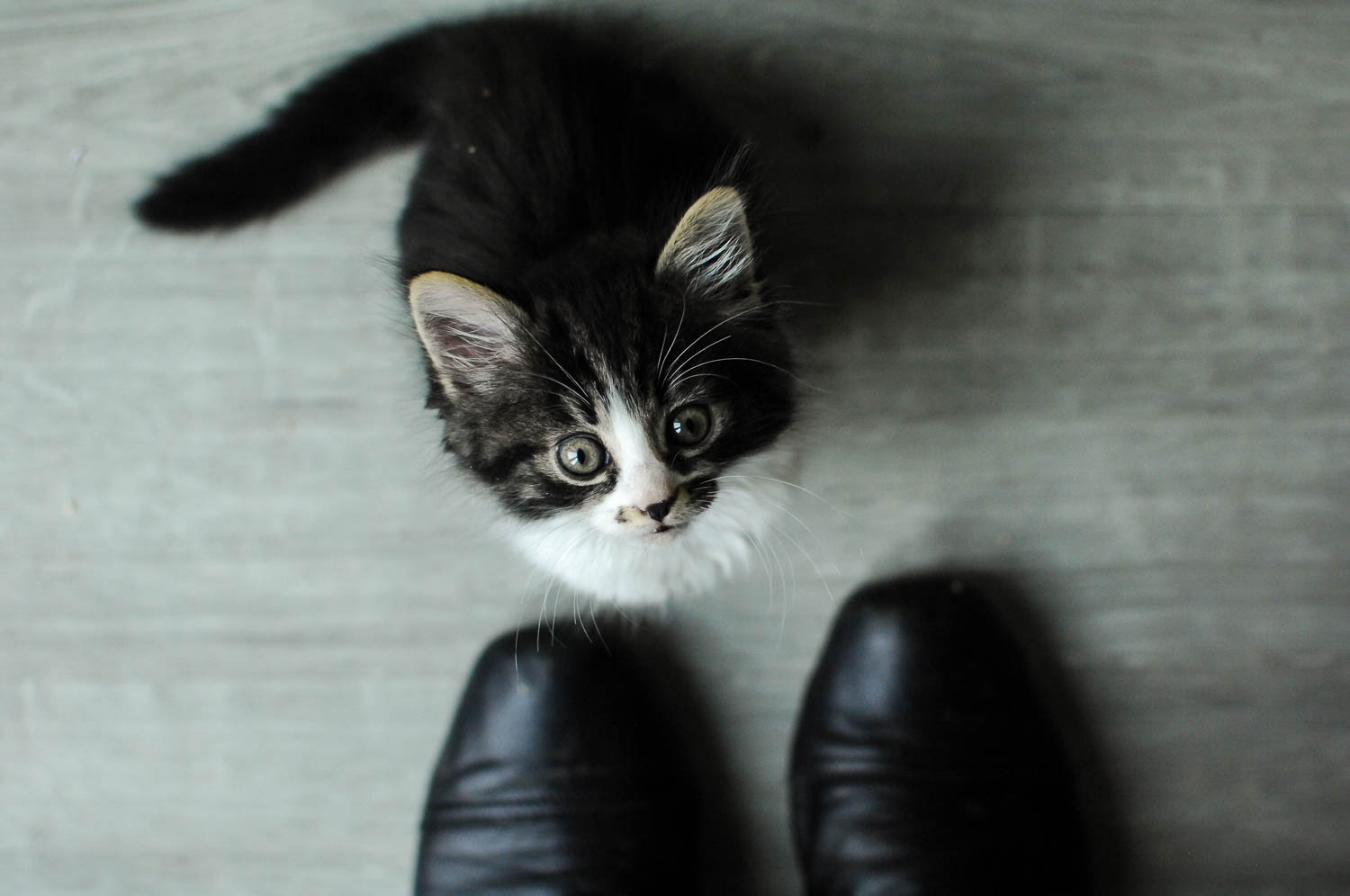 Luna, begging for food by giving me her wide-eyed innocent look

I’m pretty sure there will be plenty of photos of them on my Instagram as the days and weeks go by, documenting what antics they get up to and how the girls’ relationship with them grows.  I’m going to try and put together a little vlog of their first few weeks as well, so if cute kitten videos are your thing then keep an eye out on my Facebook page too as I’ll share it there when it’s ready.

But for now, what do you think of our two new additions…?!

Hello there, everyone! Wow, I’m on a roll with my stories at the moment! This one today is one that I wrote at school…