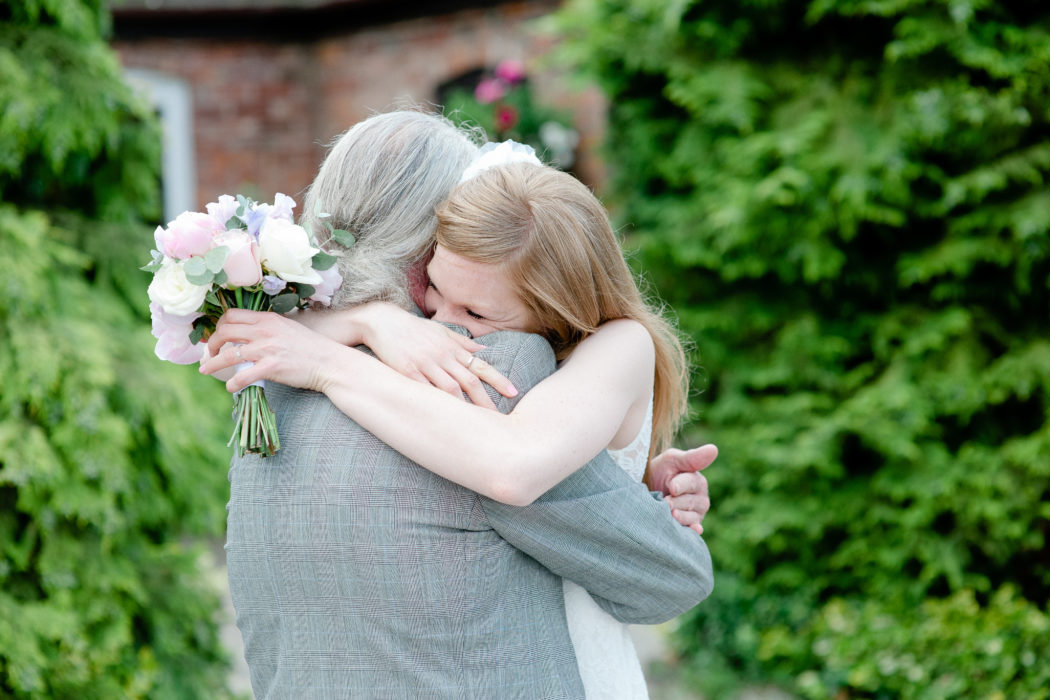 It’s crept up on me a bit this year.  I didn’t expect that.  Last year I was full of the anticipation of the day arriving, the anniversary of the day I got the phone call to say that you were gone.  I thought it would be the same this year, that I’d be waiting, in limbo, for the day to come so I could get it over with as quickly as possible.

Instead this year I’ve been aware of it, but it’s more like I’ve noticed it out of the corner of my eye, as if I’m just catching a glimpse of it but when I turn my head to look at it properly it’s vanished.  I’m busying myself with the girls, with work, with distracting myself on Facebook.  I’m back to my old habit of not wanting to go to bed in case I find out that someone else I love has died when I wake up.  I’m tired.

Since the day you died my profile picture on Facebook has been a photo of the two of us on my wedding day.  You left this earth just eight months after you walked me down the aisle.  If I’d known that the day I got married was the last day I’d ever see you… actually I’m not sure I would have done anything differently.  You were there.  That was all I wanted.

I haven’t been able to bring myself to change the photo yet.  I remember the moment in intricate detail.  You were so proud.  Of what I don’t know – you just were.  You were nervous too, I could tell.  I did my best to help you feel relaxed.  I can still feel your arm linked to mine as you walked me down the aisle, can still hear the quiet little exchange we had about my choice of music – Pachelbel’s Canon in D.  You approved. 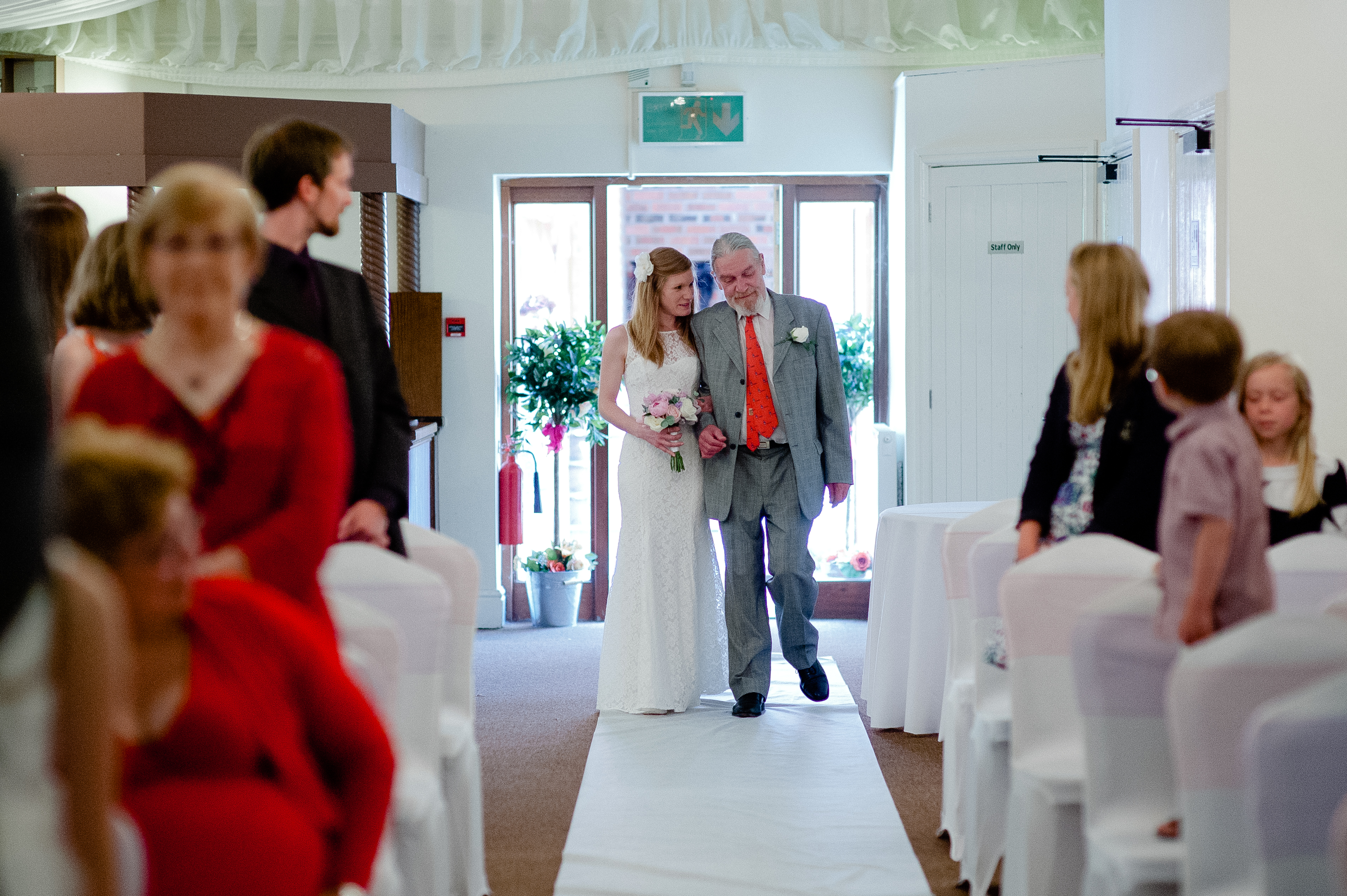 I will change the photo.  Soon.  I know it’s time.  Part of me feels that if I change it to something else it might mean that I’m ‘getting over’ my grief and I don’t know if I’m ready for that yet.

I’m learning that grief isn’t something that you get over.  Not two weeks, two months, two years or probably even two decades down the line.  It changes you, becomes a part of you, and you shape this new version of yourself around it, forever altered.

You learn to manage the sudden overwhelming tidal waves of tears that spill over unannounced at the first four notes of a song that reminds you of them.

And you learn to manage days where nothing happens at all and you can talk about them with joy in your heart, remembering all the good times.  The distance between those two things might be minutes, or months.

Your death, although unexpected in it’s timing, wasn’t too great a surprise.  I’d been preparing myself mentally for it for years.  What I didn’t realise was that no amount of preparation could actually get me ready for the depth of the sorrow and heartbreak that I felt (and still feel).  You will forever be my reminder that life is too damn short, that it can be taken at any moment, without warning.  You were only 63.  You weren’t feeling well so the doctor sent you for some blood tests.  Less than a week later you were in hospital with suspected pneumonia.  Except it wasn’t pneumonia, it was advanced stage lung cancer and I couldn’t get to you in time to say goodbye.  Something I will always, always regret.  Instead I had to give my permission over the phone, just two hours after finding out you were in hospital, for the doctors to turn off your ventilator – the only thing that was keeping you alive.  I will never forget that moment.  You died a few short hours later, in the early hours of the morning.

“When someone we love dies, I think we tell ourselves a story.  To somehow make it our fault, as if that gives us more control” Noah Solloway, The Affair S3 E10

I think I agree with that.  I’ve been doing it my whole life – trying to control the uncontrollable I mean.  It doesn’t work.

It has taken me until now to realise that continuing to feel sad that you aren’t here any more isn’t really doing me any favours.  That’s not to say it’s not ok to feel sad.  Of course it is.  It’s natural, and normal (whatever ‘normal’ is).  But I know you wouldn’t want me to be sad forever.  There’s already too much sadness around.  I think you’d want me to go out and experience whatever I wanted to experience, to do what I damn well wanted and to be free.  I think you wanted to be free too.  I know you felt sad a lot, and not good enough, and all the other things that I used to feel.  You just showed it in a different way.  I hope that you’re free now and that you have found the peace you struggled so hard to find in life.

I miss you Dad.  That will never change.  And two years on it still feels as fresh as that day it happened.  I’m ok with that.  It’s the sum of our days over time that’s important really isn’t it?  How much love we share.  So I can let myself have this one day to let the sadness out.

I love you Dad.  You’re always in my heart.

And you’re always on my mind.

My First Ever Photoshoot: Claire

A few weeks ago, in a moment of bravery I offered my local friends and followers on Facebook the opportunity to have a free photoshoot…