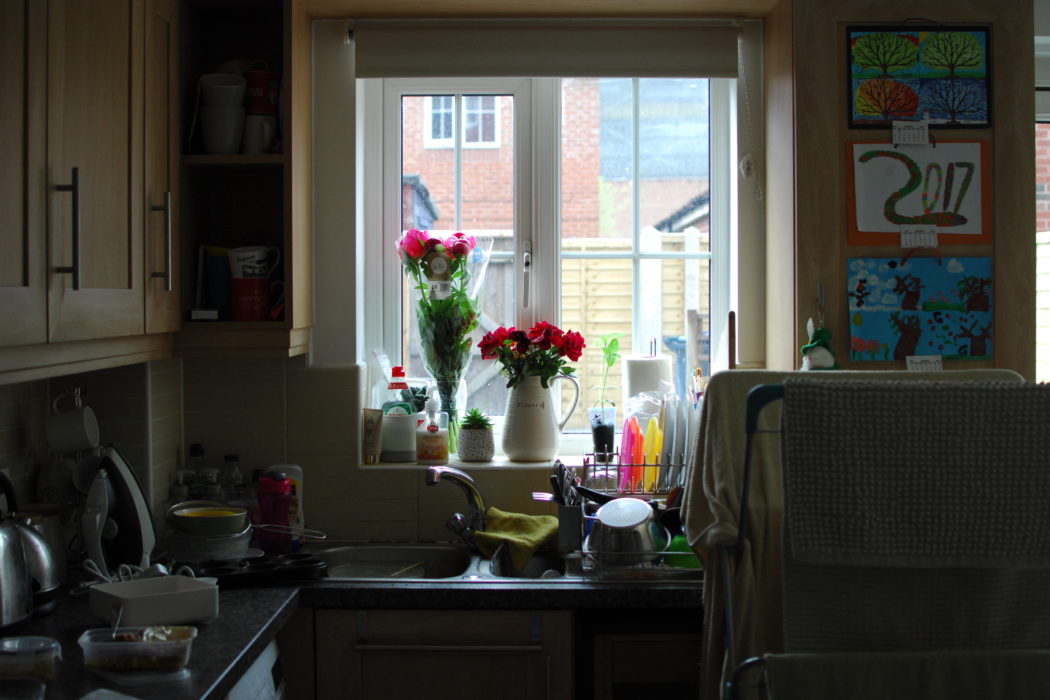 I only decided halfway through today, a bank holiday Saturday, that I wanted to document it.  I don’t know what inspired me. I just suddenly had a gut-wrenching urge to capture ‘us’.  All of us.  The good and the not-so-good.  There was nothing special about today – it’s just been an ordinary day.  A day of me trying to keep you occupied.  Trying to think of ‘fun things’ for us to go and do because working from home means that by the time the weekend comes around I am climbing the walls and need to escape, even though the three of you want nothing more than to stay at home.  A day of me trying to keep the house in order and stay on top of the things that, seemingly to you, happen in the background as if by magic.  I even said that to you (Mimi) this evening, when you remarked with surprise “Oh, thank you for changing my bed covers Mummy.  When did you do that?!”.  I responded, a little too petulantly perhaps, that Mummy does a lot of things that nobody ever notices.

There was much that I didn’t capture.  And part of me wonders as I’m typing this “why am I bothering?  It’s not even a full day – how can you call it a ‘day in the life’?  Who even cares?” but I’m still typing as I’m thinking it and there is something inside me that knows that this is important even if I don’t know why yet.  The answers will come in time.  I’m learning to trust that now.

I didn’t capture the quiet half hour I had to myself this morning whilst the rest of the house was still sleeping.  I got up at my usual time of 5.30am and crept about getting ready, praying to gods I don’t believe in that the waterproof tape sealing the crack in the shower base would hold and the water wouldn’t leak through the ceiling below again.  It’s going to be at least two weeks until it can be replaced and I hate baths.  My mission accomplished, I tiptoed down the stairs, greeted and fed The Boy before letting him out, ate my breakfast in peace (two pieces of my homemade chunky flapjack if you really must know) and settled down with a steaming mug of hot chocolate in front of my laptop.  It wasn’t until half an hour later, once I’d already answered some urgent work emails (for my therapy job), published a blog post you’d written (Ella) and caught up with social media, that the first one of you (Lola) shyly creaked open the door and peeked around.  I love the smell of you when you first wake up.  You stumble towards me, still sleepy-eyed and tousle-haired, nestling in to me for a cuddle and I inhale the scent of you deeply.  It’s my favourite moment of every day.  Breathing in your softness, your need for me and only me.   Relishing the clean slate of the new day where no one has yet shouted, or fallen over, or said “No”.

I didn’t capture you all on the sofa, draped around each other, your limbs interlocking as you sang along to Ed Sheeran songs that you’d put on Youtube on the TV.

I didn’t capture the mad rush of getting ready to take you (Mimi) to football.  The last minute hunt for socks and boots and trainers, filling your drinks-bottle a little too quickly and spilling water over the kitchen side.  The repeated shouts up two flights of stairs to please hurry up and brush your teeth or we were going to be late.  The bundling of everyone into the car, checking seatbelts were fastened and sunglasses in position.

I didn’t capture you all sat around the table at lunch-time, eating your ‘toasties’ and grapes and apple and crisps-with-dip.  Your standard weekend lunchtime pudding of custard or rice pudding.  The conversations you had with each other.  Laughing, joking together.

I didn’t capture the meltdown you (Mimi) had at being asked to wear your hoodie to go out in the afternoon because the sun had gone in and it was much chillier than earlier.  My arms were too full of you to be able to pick up my camera and it would only have made you scream louder.  Anyone would have thought I was asking you to walk through fire given your reaction.  I tried to stay calm, my heart beating wildly as I fought not to shout back, and I pulled you on to my lap as you sobbed and raged and screamed.  I snuggled you in close, as best as I could anyway, and explained over and over, in every way I could think of, why it was important.  You do get hot so much more easily than your sisters and I find that hard to understand because I am the opposite – always cold.  I am learning though.  Learning to choose my battles.  I think I was right to insist on this one because later on, when we did eventually make it out of the house, I noticed you pull your hoodie a little closer around you as we stood in the chilly wind.  I said nothing, didn’t even catch your eye, but I smiled inwardly because I love that I know you better than you know yourself sometimes.

And I didn’t capture (properly, anyway) the ‘five minutes of madness’ as we like to call it – that slot of time every evening where everyone goes crazy and then crashes – whether from tiredness, hormones, unstable blood sugar levels or something else entirely.  You’re all happy – that’s why I don’t mind too much about the volume level increasing several decibels, the bouncy rubber ball boing-ing all over the kitchen while I’m trying to cook, the eruptions of giggles just from a sideways glance at each other with some secret hidden meaning that I’ll never understand.  I wish I could capture that joy, as difficult as I sometimes find it, because I want a record of it to look back on that’s more tangible than what I hold in my mind.  I did manage to snag these portraits though and I love them all. 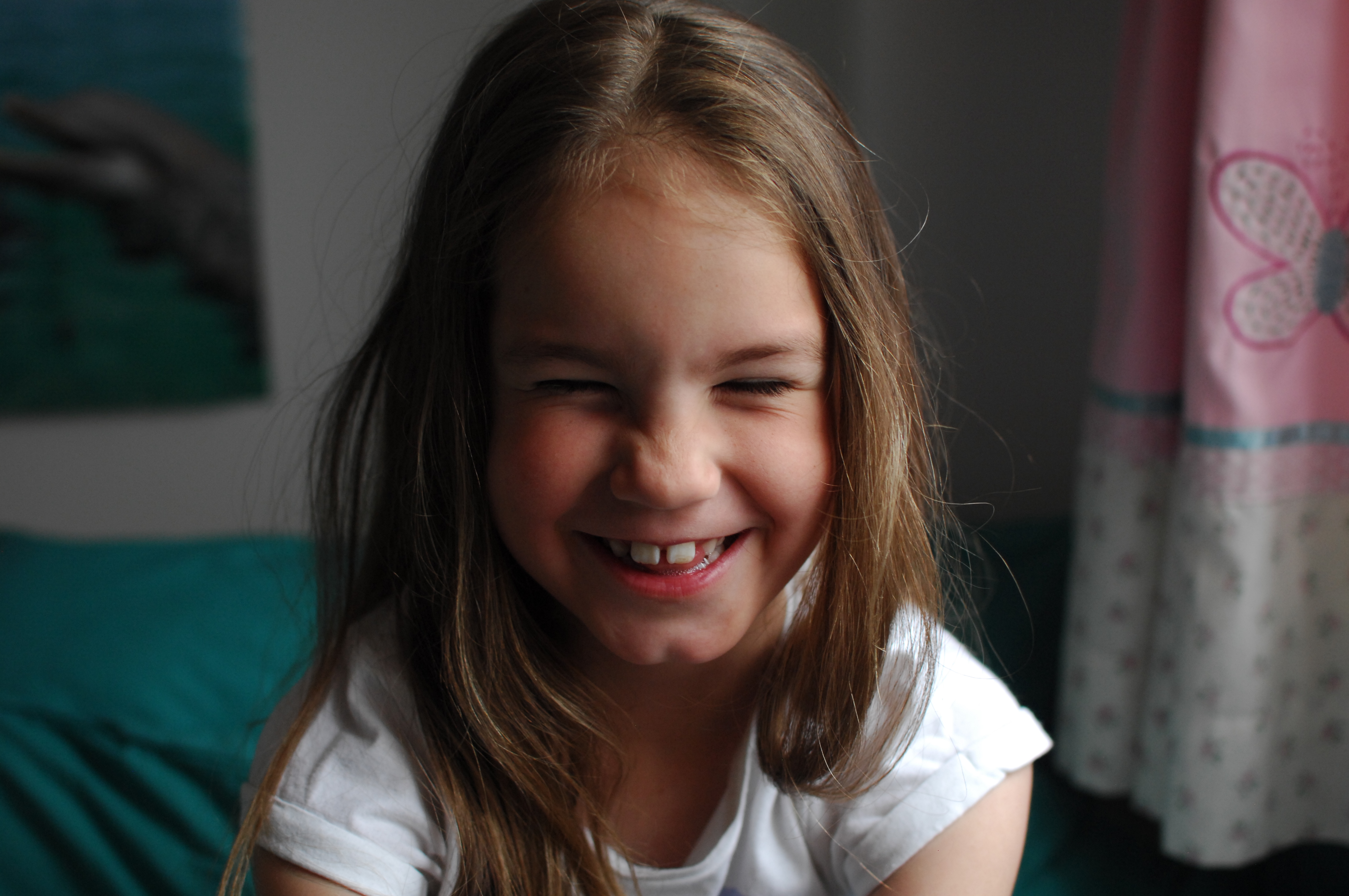 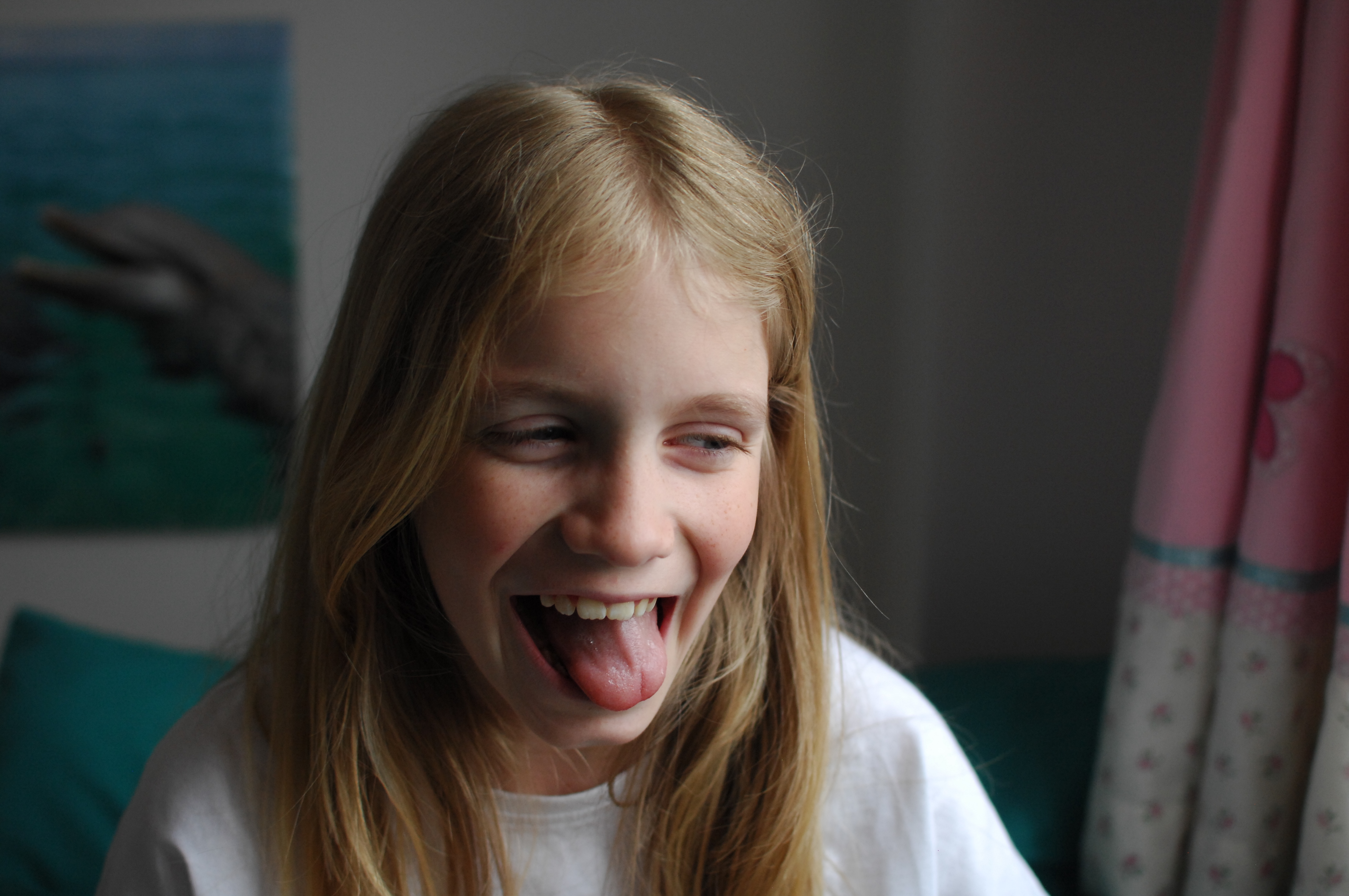 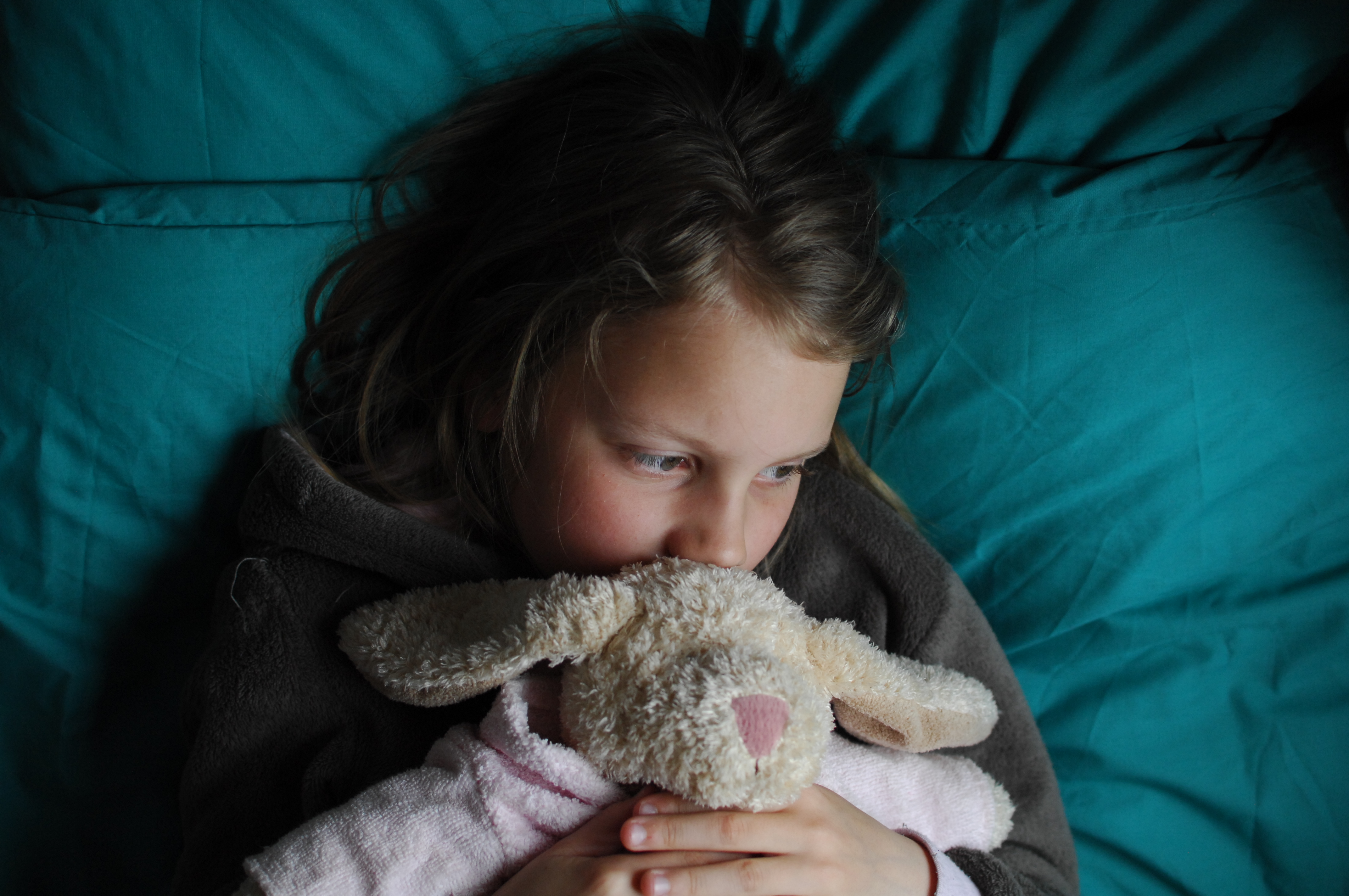 What I did capture was the pile of library books by the stairs waiting to be returned so that you (Ella) could take out another eleventy-billion books to see you through the next week.  Ok that’s an exaggeration.  I think your record is sixteen.  I captured the coats and boots scattered in the hallway floor where they’d fallen after being haphazardly flung in the general direction of ‘put away neatly’. 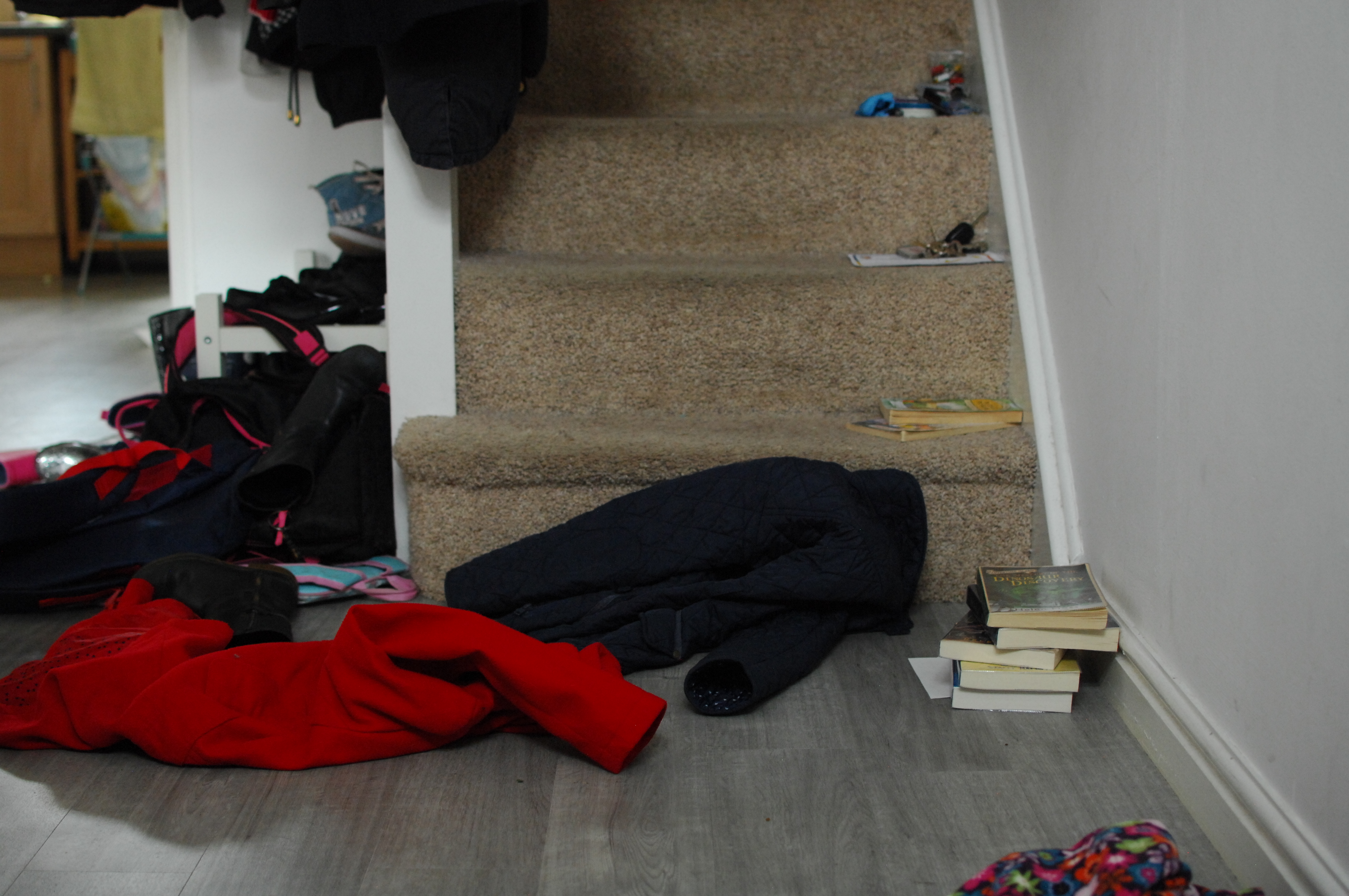 I captured us baking together – the recipe for banana muffins that you (Lola) had seen in the My Little Pony magazine you bought last week with your Easter holiday money from Nana.  You read out the ingredients and the instructions one by one.  You carefully mixed and stirred, trying to copy how I did it.  You poked your tongue between your teeth in concentration as you spooned the thick mixture into the paper cases.  I wish I’d captured that in a photo but instead it will have to stay forever etched in my memory as I’d temporarily put down the camera to help you dollop a large spoonful in the right place. 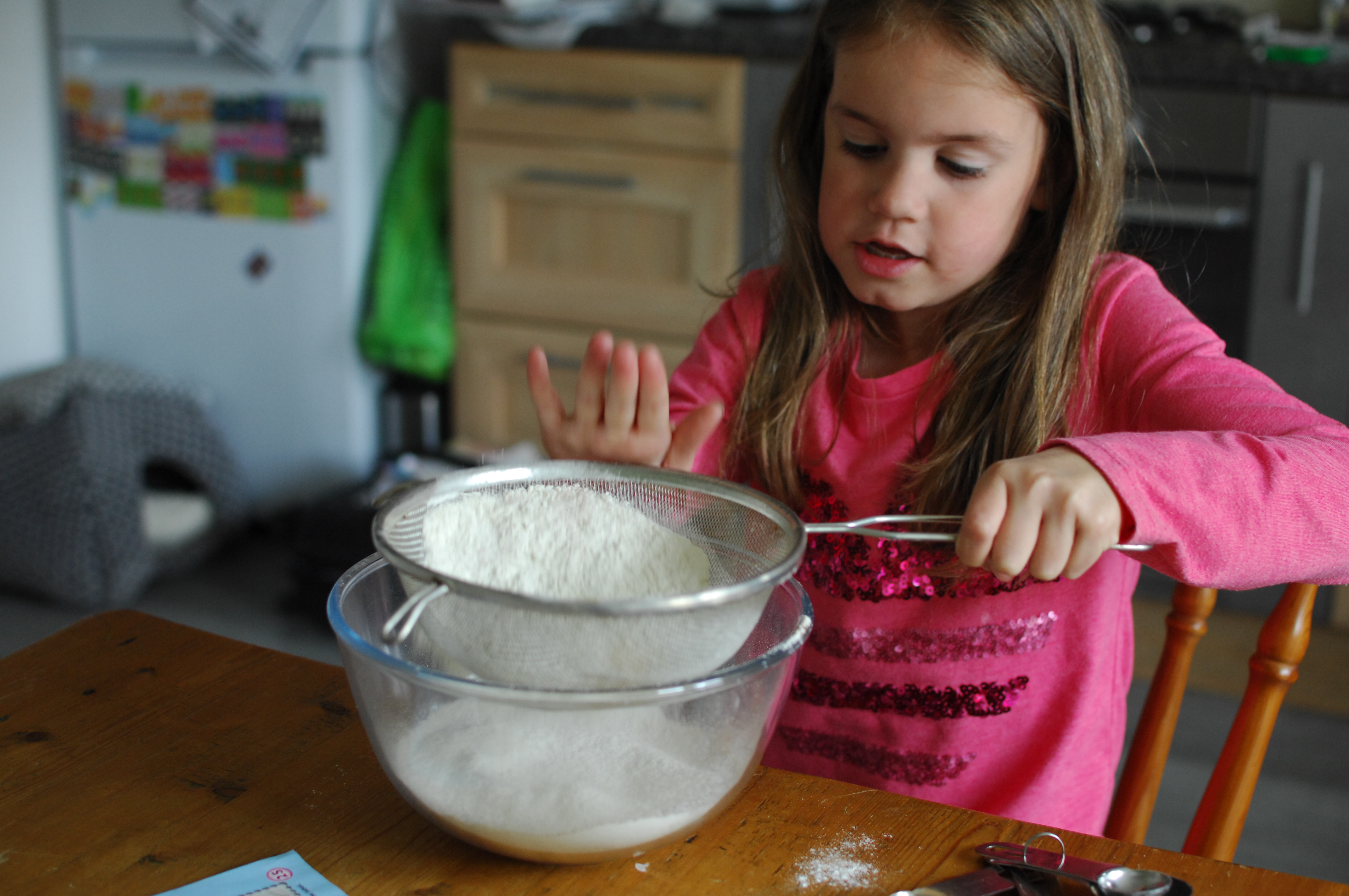 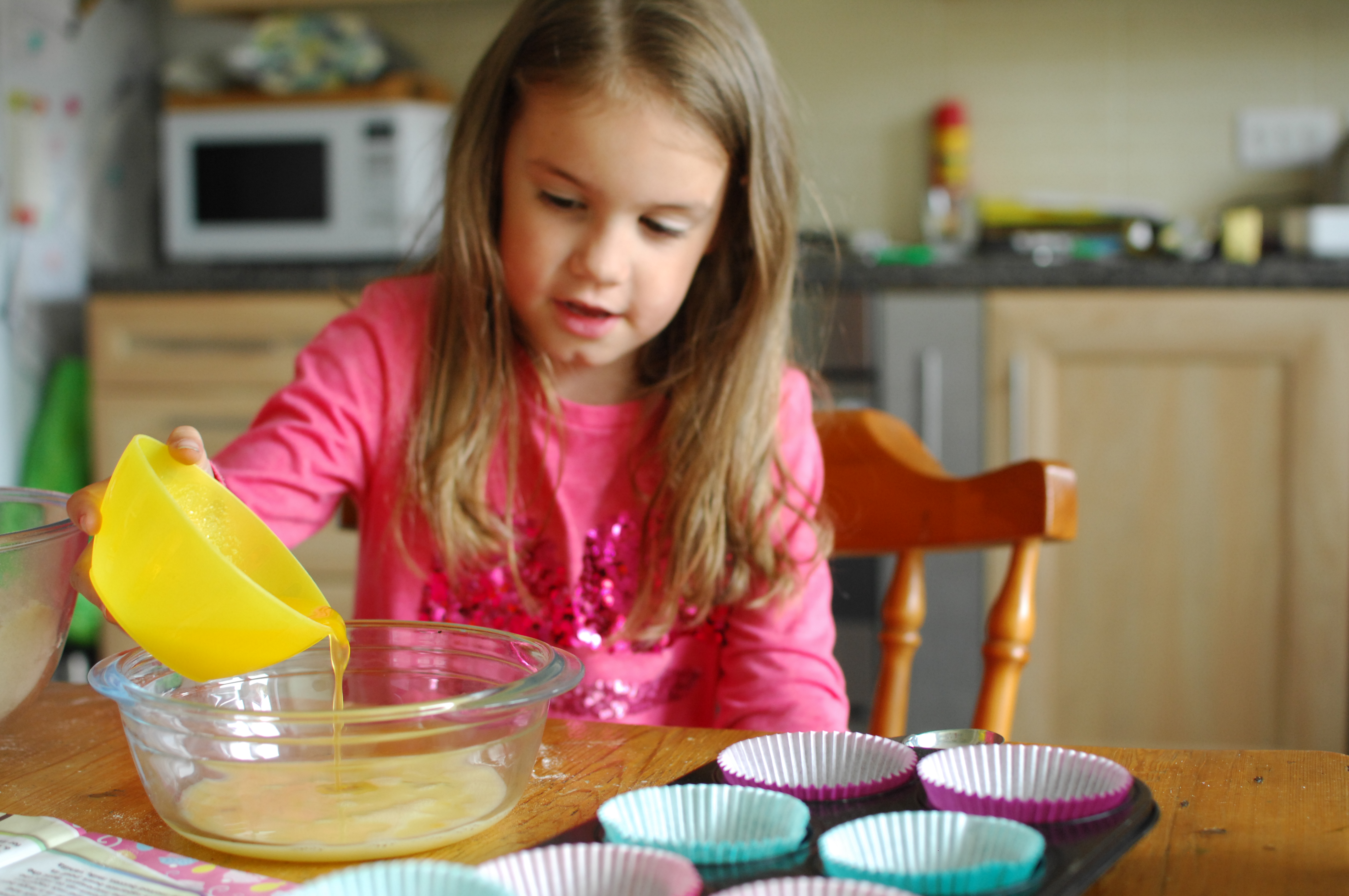 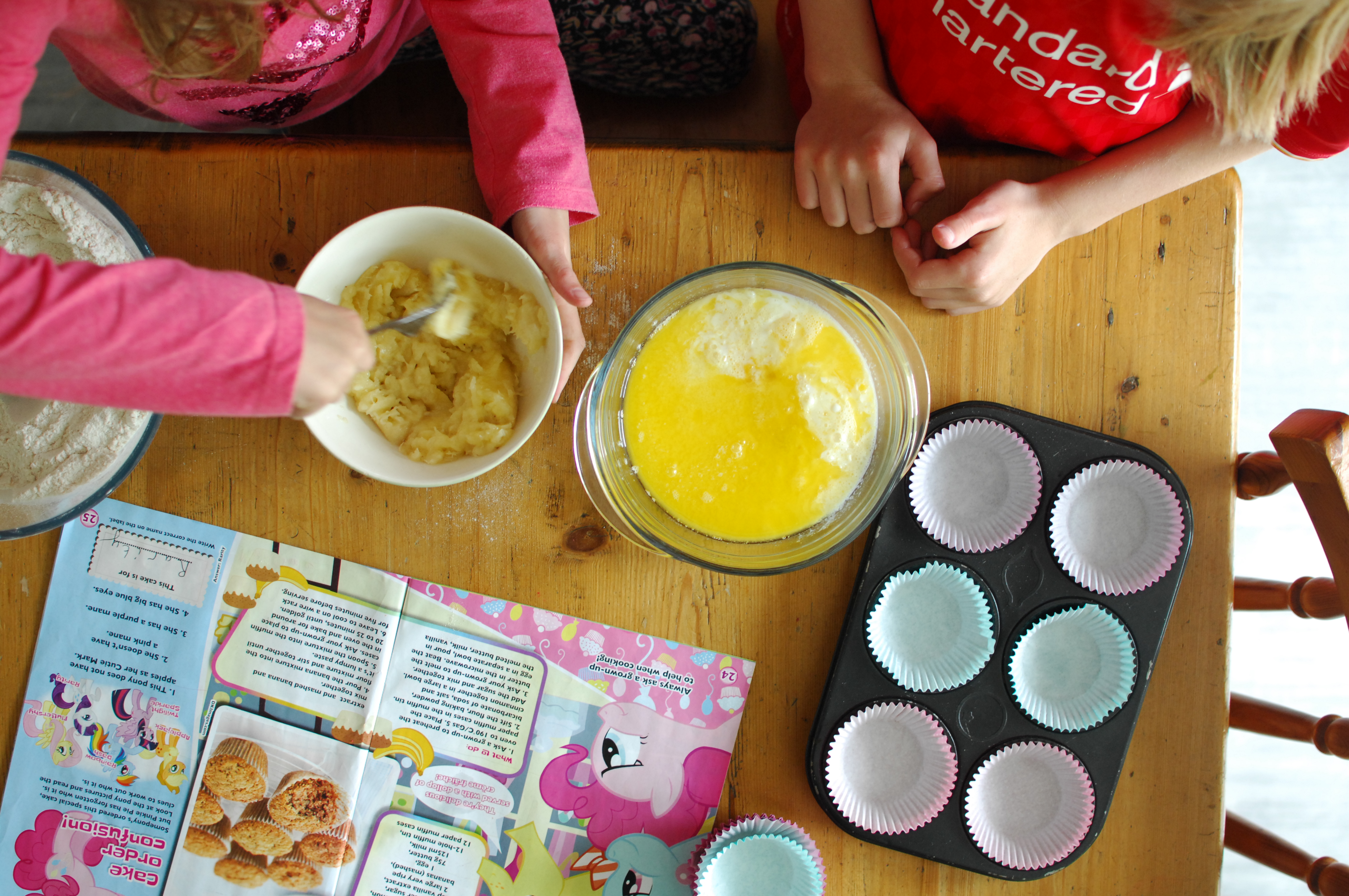 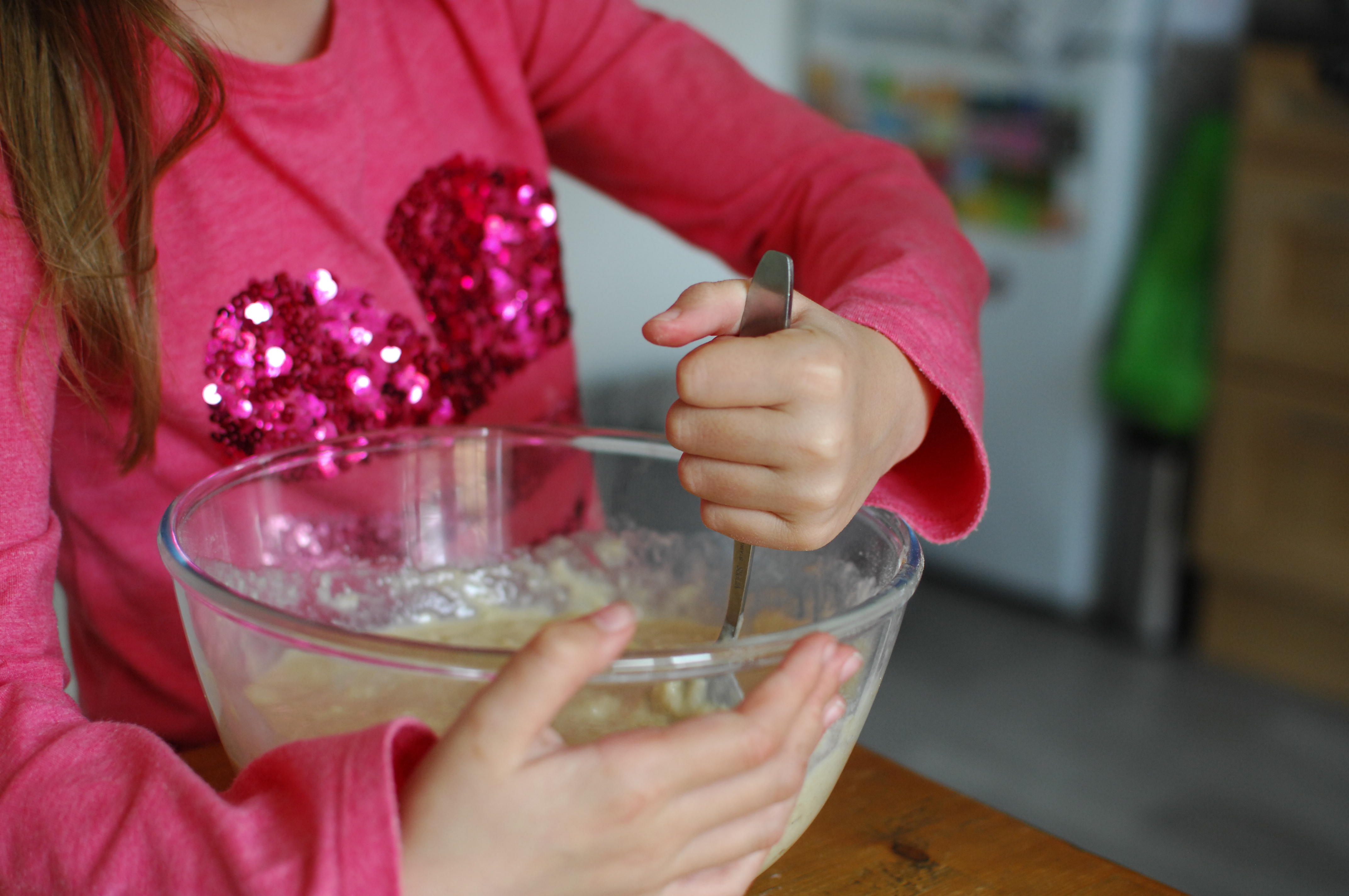 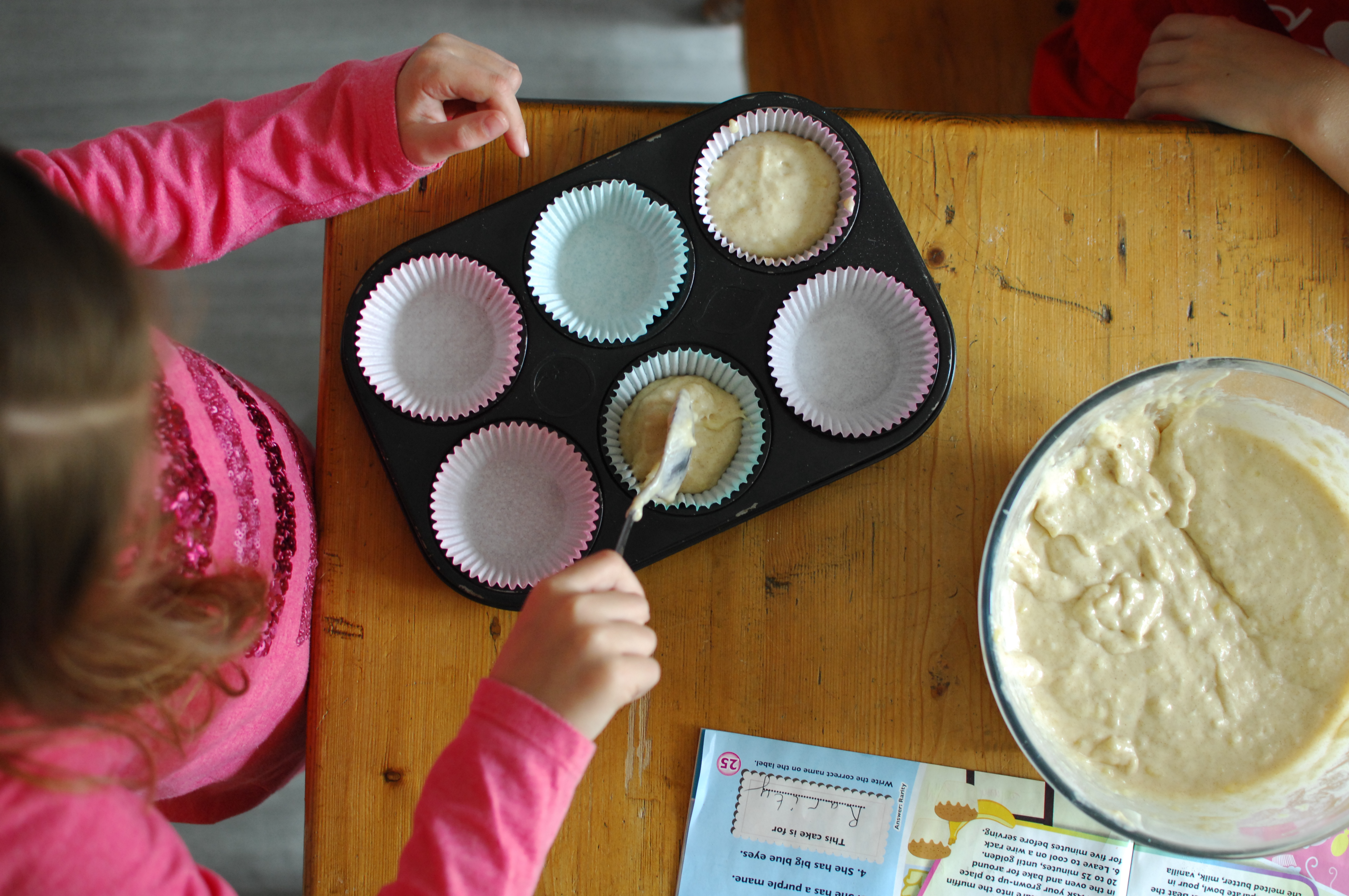 I captured you (Lola) sitting in front of the oven, watching the timer count down twenty minutes until the muffins were ready.  You announced the new time as every single minute passed.  I captured you peeking in through the oven door as the second batch were cooking, your mouth open in astonishment as you saw how much they had risen. 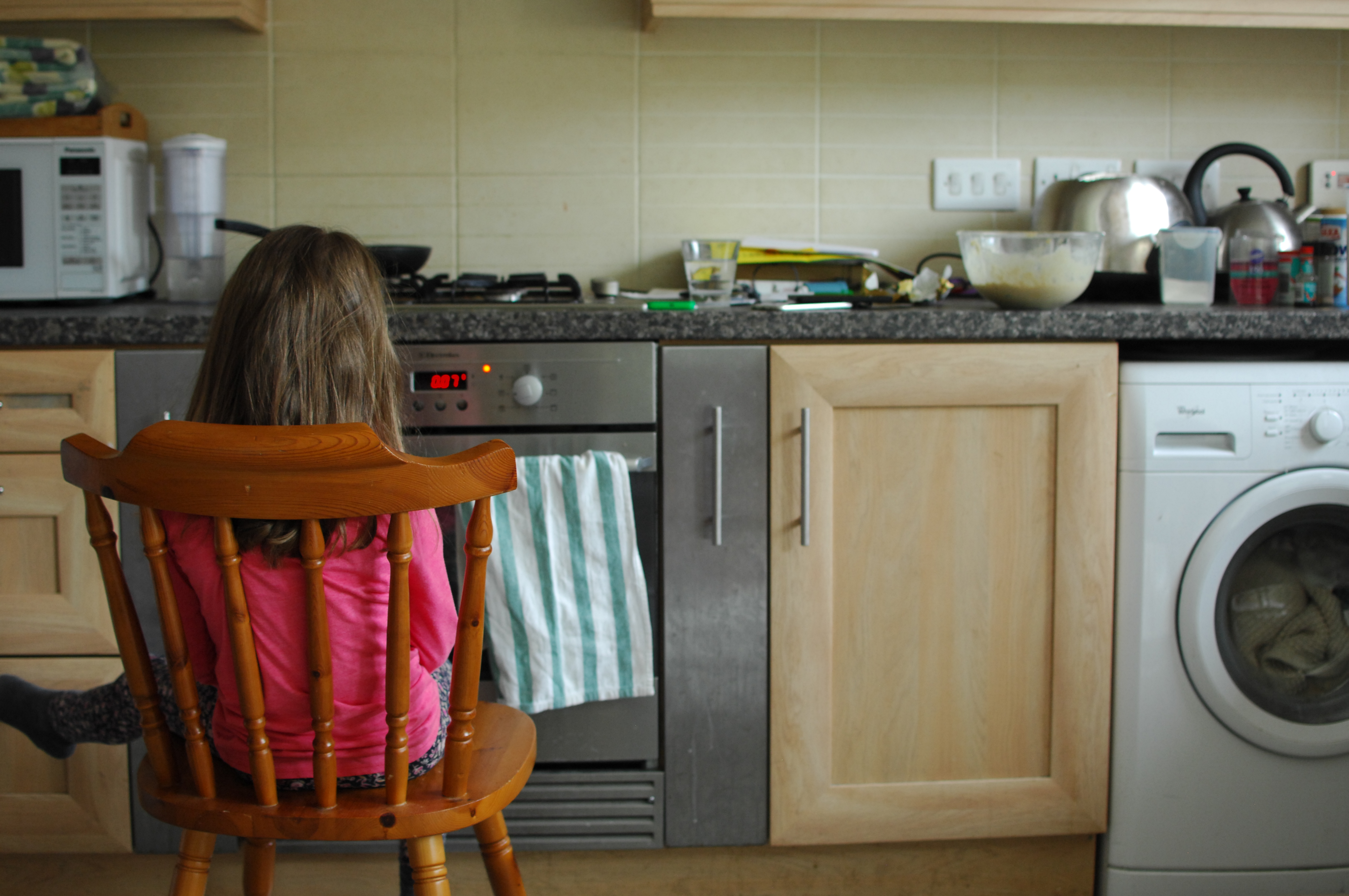 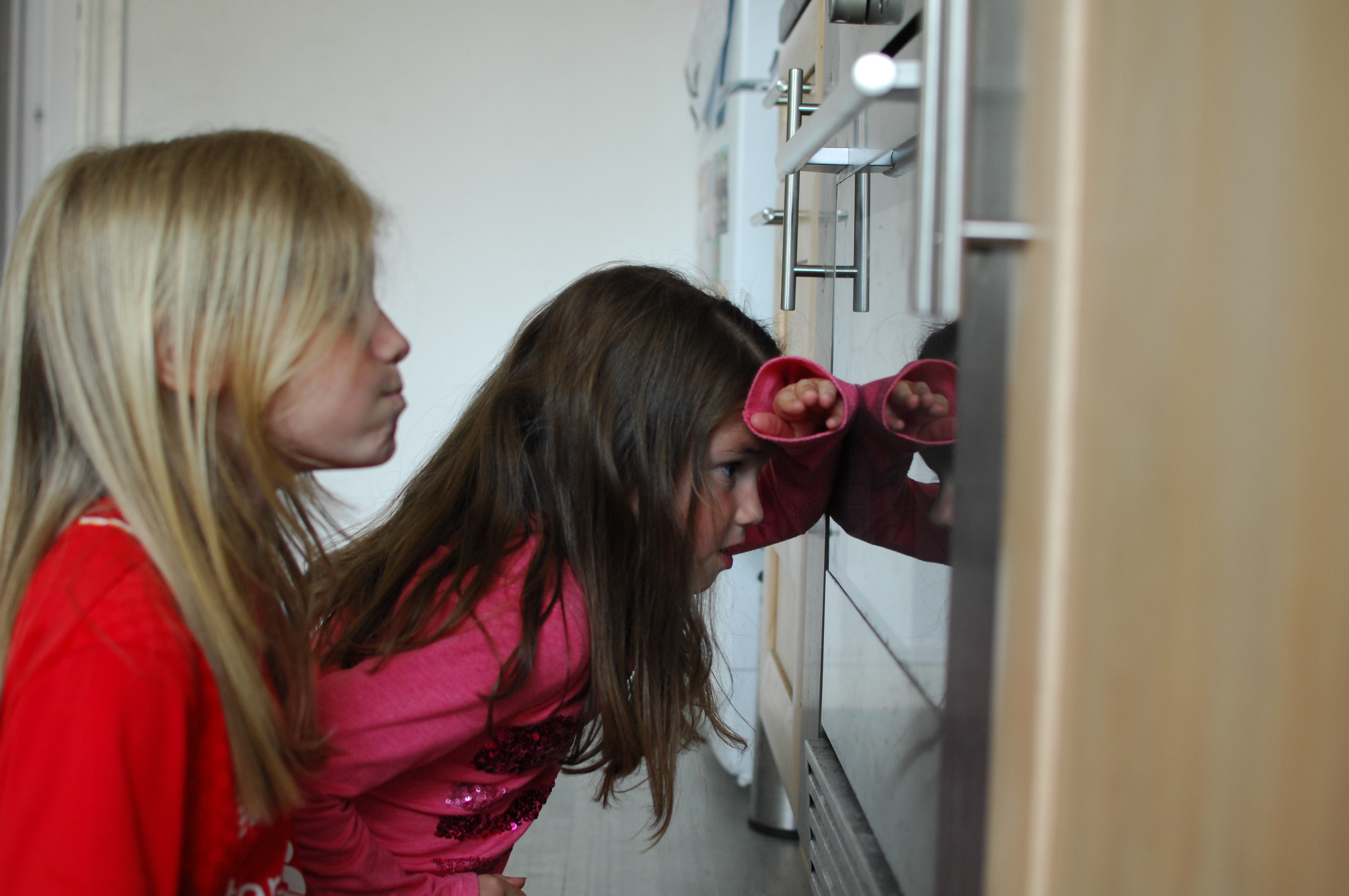 I captured my kitchen as it looks the vast majority of the time – washing up on the drainer from breakfast and lunch.  Dirty dishes on the other side of the sink – the aftermath of baking with you.  Laundry hanging on the airer – one of three washes that I’d end up doing today.  A new bunch of flowers that I’d bought myself still in their wrapping and standing in a pint glass of water because I haven’t had the time to put them into a pretty vase yet. 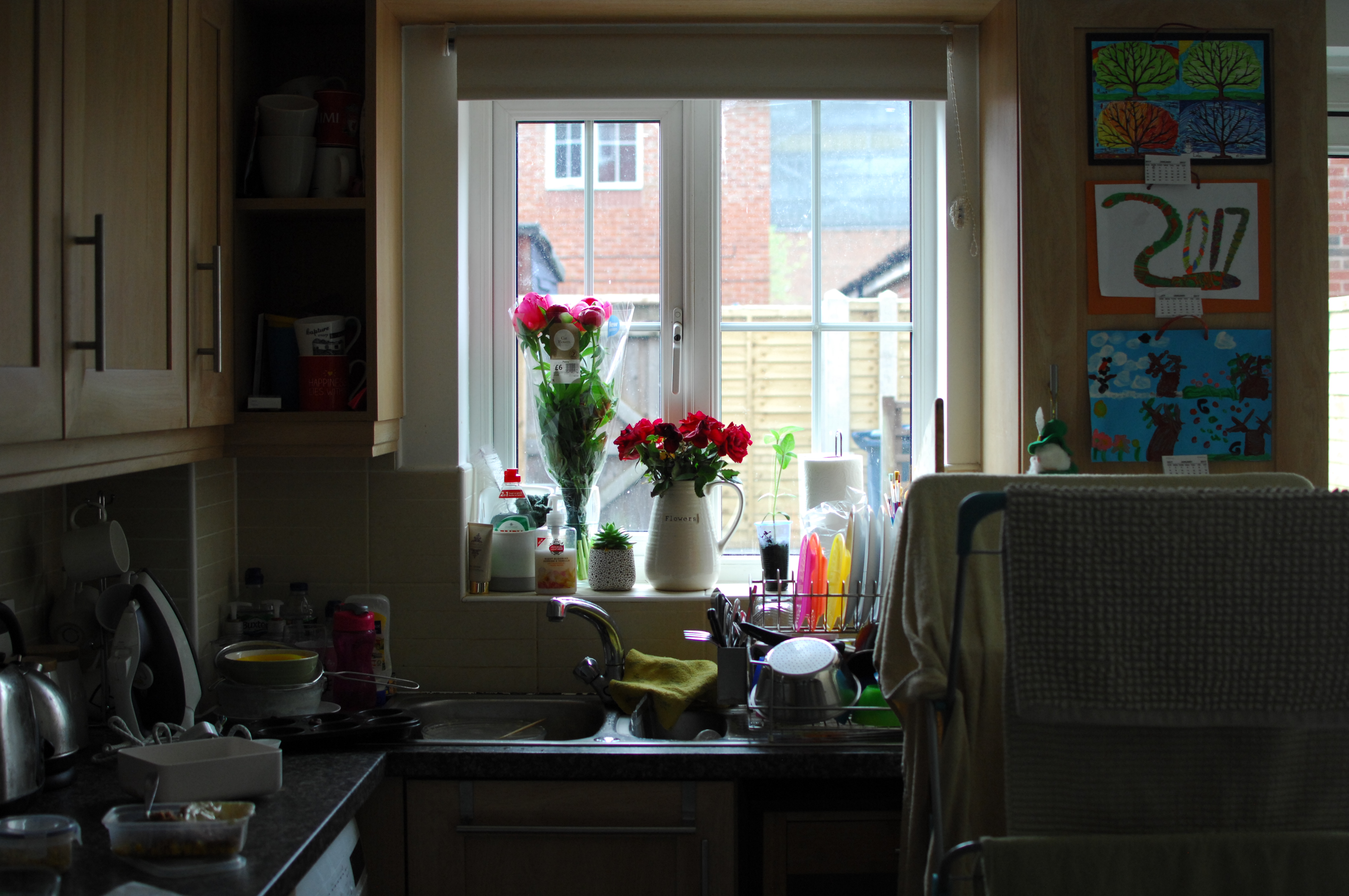 The only time my kitchen doesn’t look like this is at the end of the evening after you’ve all gone to bed and I’ve had the chance to clean and tidy and sort.  I like it when it’s like that – all the disorganisation and clutter gives me a headache and makes me feel all chaotic inside.  I like order and neatness.  But I’m learning to embrace the messy.  I don’t really have much choice – not with you three.  Still, for that brief moment before I turn off the light and head upstairs to bed, I soak it up.

Because tomorrow will be a new day and I’ll start all over again.

This is a new feature on the blog.  I’ll be doing more – I know that for sure – but when the mood takes me.  I’m not going to plan it in advance.  I want it to be spontaneous, capturing us as naturally as possible.  I’d love to know what you think.  There is a tiny piece of my heart that is aching to capture a ‘day in the life’ for someone else – the chance to document you as you go about your day, telling your story.  If this is something you might be interested in please do connect with me and let’s talk.

April 2017: The Moments In Between

Despite it only being a short three and a half weeks between the Easter holidays and the next school break, we were all very…