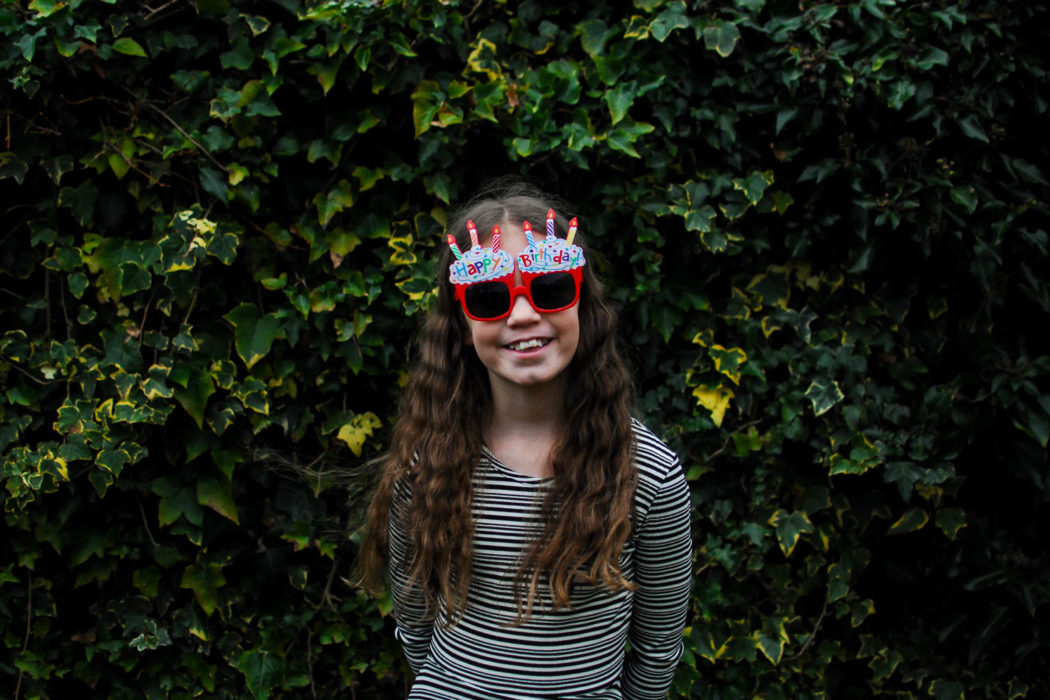 Every year starts off in the very best of ways as we celebrate Lola’s birthday at the beginning of January.  This year she turned ten and I’m still finding it hard to believe that my littlest baby is now in double digits.  I think maybe that’s why I’ve taken so long to write her birthday blog post – I don’t want to face the reality that all of my girls are growing up far more quickly than my heart can handle.  I re-read her birthday post from last year and am stunned at how much she’s changed in the last twelve months.

The start of the New Year is a tricky time to have a birthday. On the plus side, Lola’s birthday always falls in the Christmas holidays so she never has to go to school on her special day.  On the down side, everyone is pretty much over celebrating anything by this point and because the weather is usually less than favourable it means that whatever we do to mark the occasion needs to be indoors. 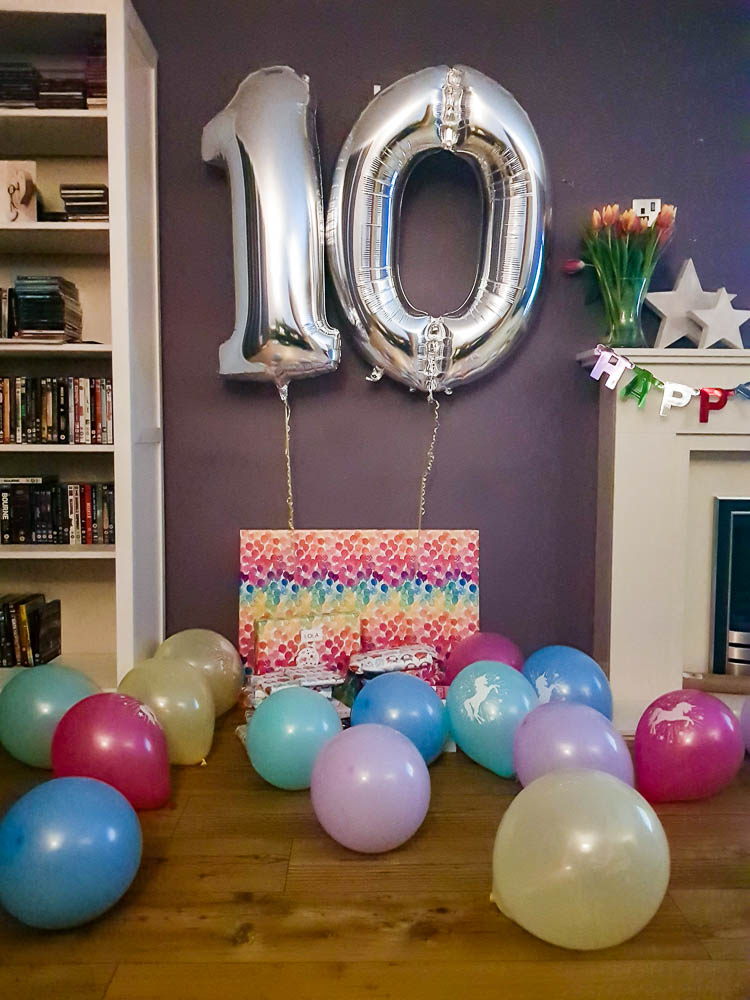 Birthday Eve – balloons, banners, cards and presents all set up ready for her to come downstairs in the morning. All three girls love this little tradition 🙂

This year for her birthday treat we surprised Lola with a visit to the Kitty Café in Birmingham.  I’d booked a table well in advance as I know they get very busy.  We had the first time-slot of the day at 10am and turned up before they’d even opened the doors.  Lola has been desperate to go to the Kitty Cafe ever since her best friend visited last summer and told her all about it – the two of them love cats and so it seemed to be the purr-fect place to take her for her birthday. 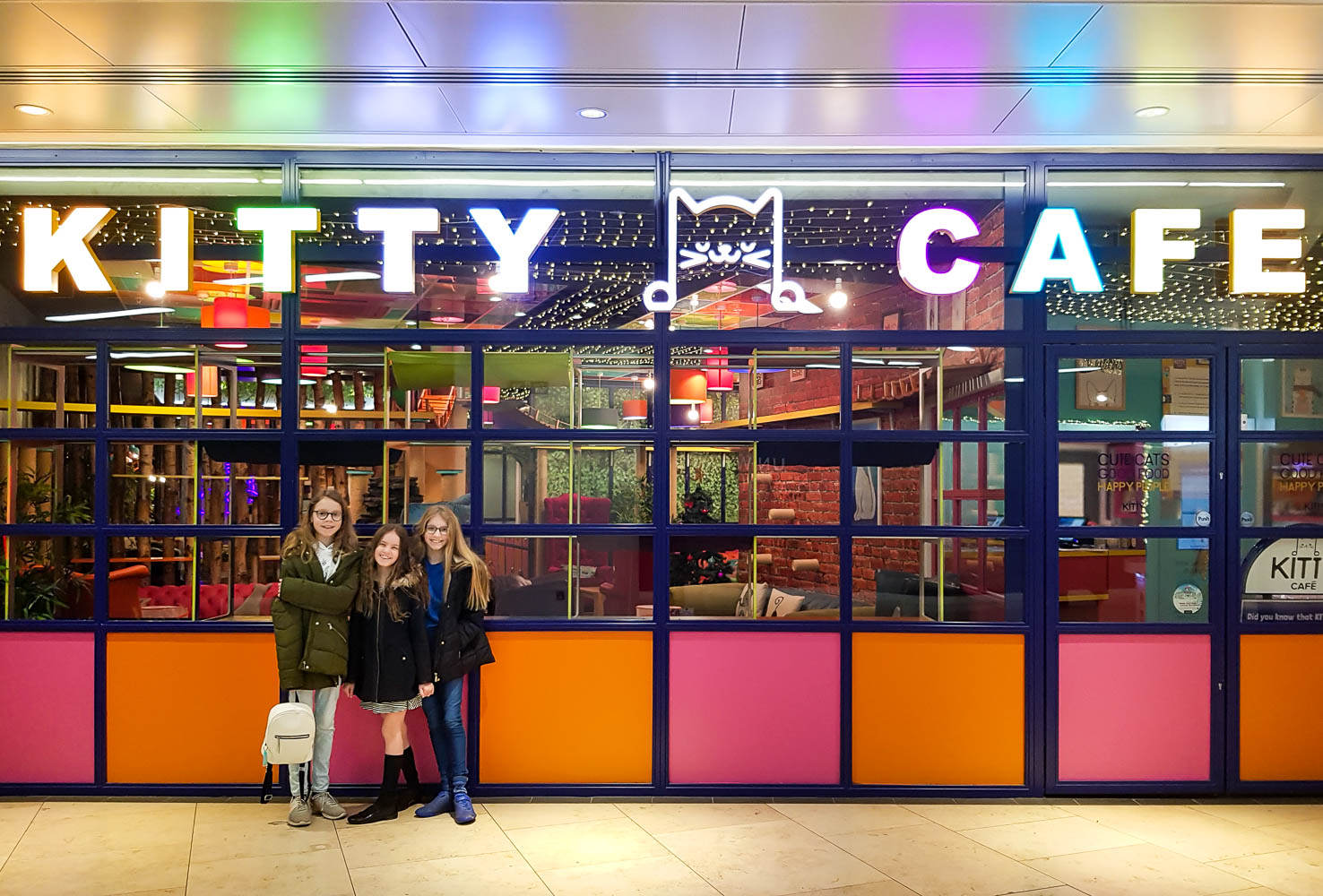 Excited to visit The Kitty Café In Birmingham! 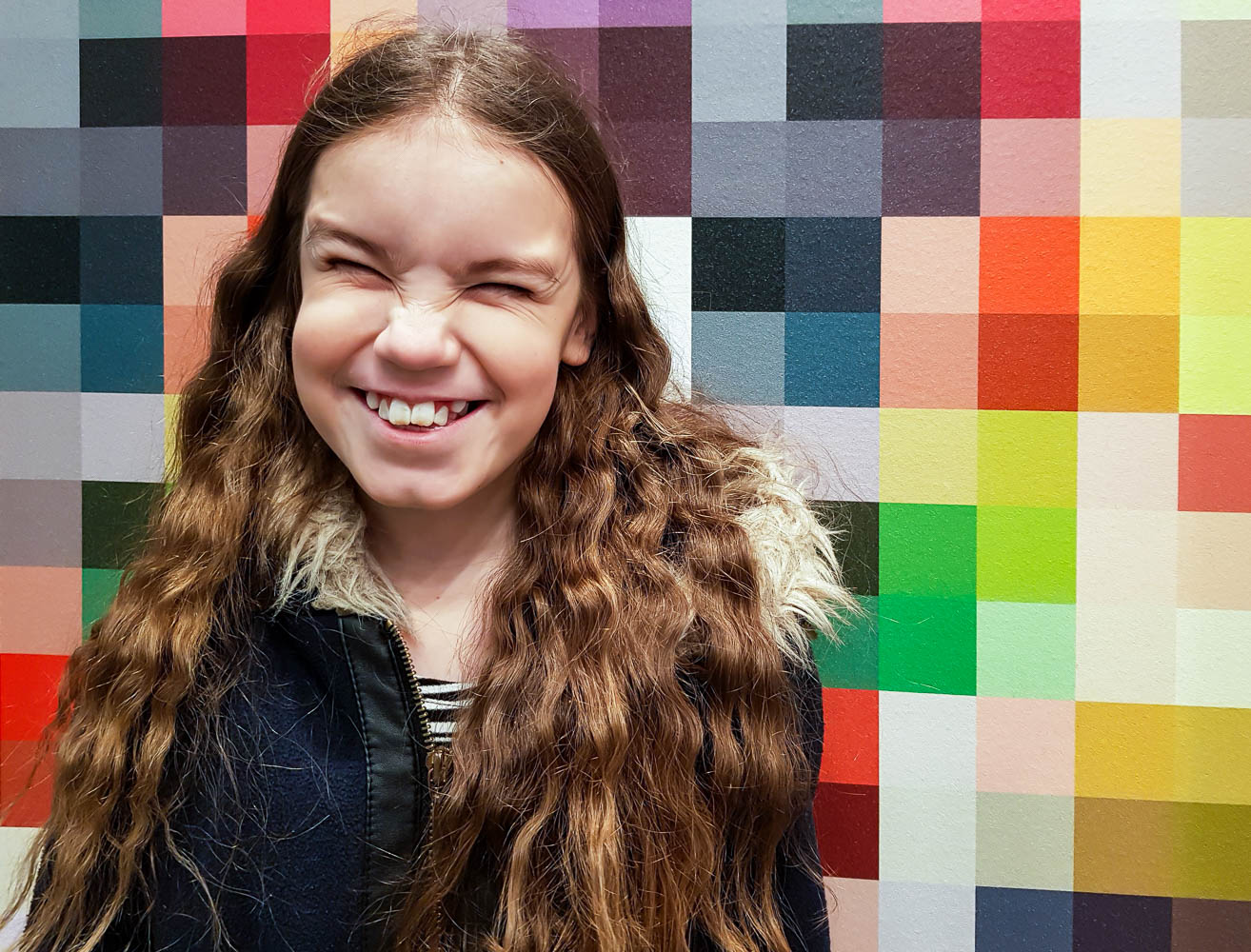 Look how happy she is! (I love that little nose-wrinkle)

Of course the girls loved it!  I was really impressed with the space: full of bright colours; a fantastic adventure playground for the cats to enjoy (things to climb on, scratching posts, snuggly beds, water bowls, plenty of toys, places where they could be out of reach if they wanted to be away from people); plus it was really clean.

We ordered cakes and drinks then wandered around playing with the cats whilst we waited.  There were so many of them, ranging from tiny kittens up to wise old veterans who kept a close watch on the little ones. 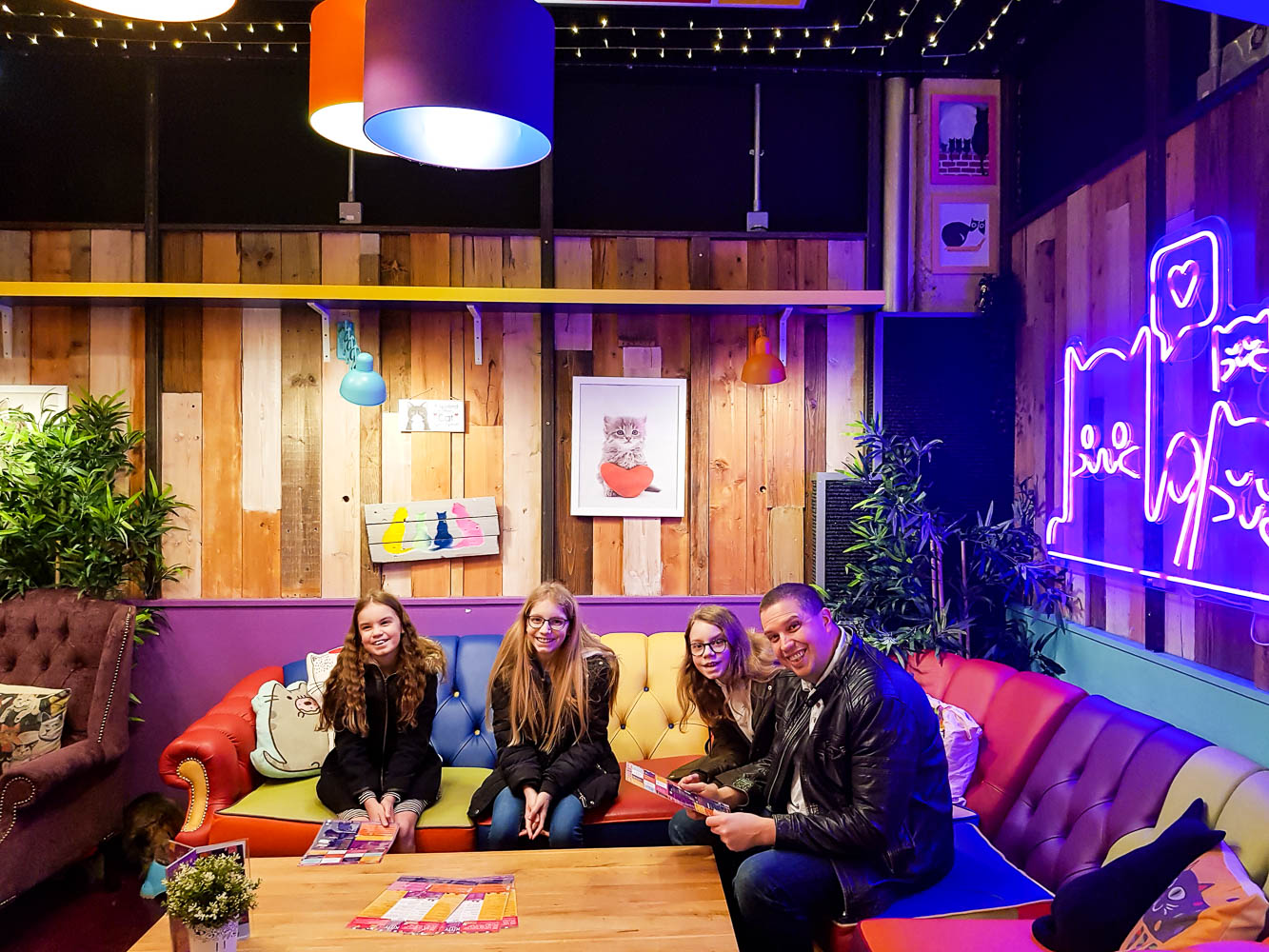 Our little rainbow-coloured corner of the Kitty Cafe 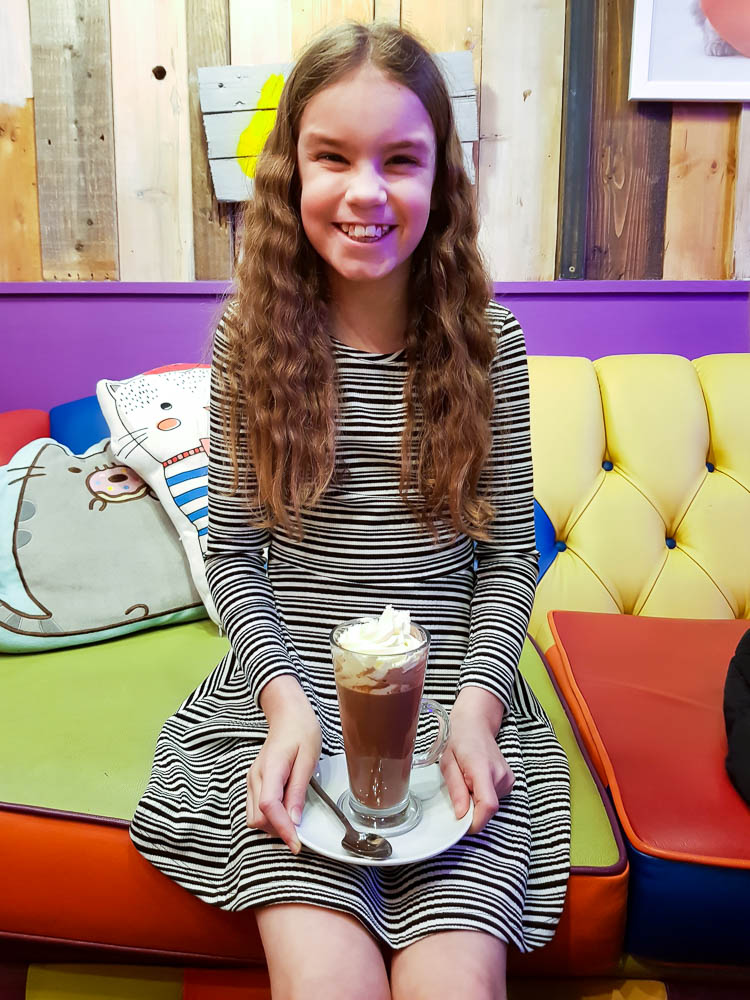 The girls had cake & hot chocolate and it all looked delicious

We all agreed that a teeny ginger kitten called Crunchie was our favourite.  He reminded us so much of our boy Pumpkin who we lost to a hit and run driver a couple of years ago.  Isn’t he gorgeous?! His paws and ears were far too big for him and it made him even more adorable. I fell a bit in love with his sister, a beautiful tortoiseshell called Twix, as well and it took every single ounce of willpower not to adopt them immediately and take them home with us. 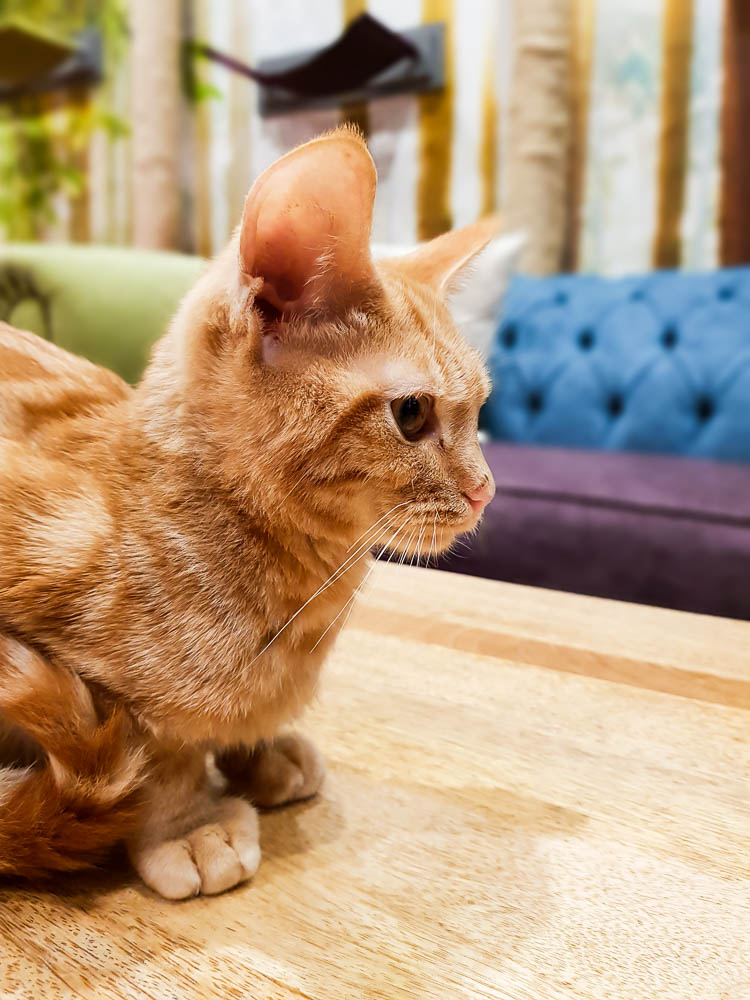 This little guy – Crunchie – was our favourite 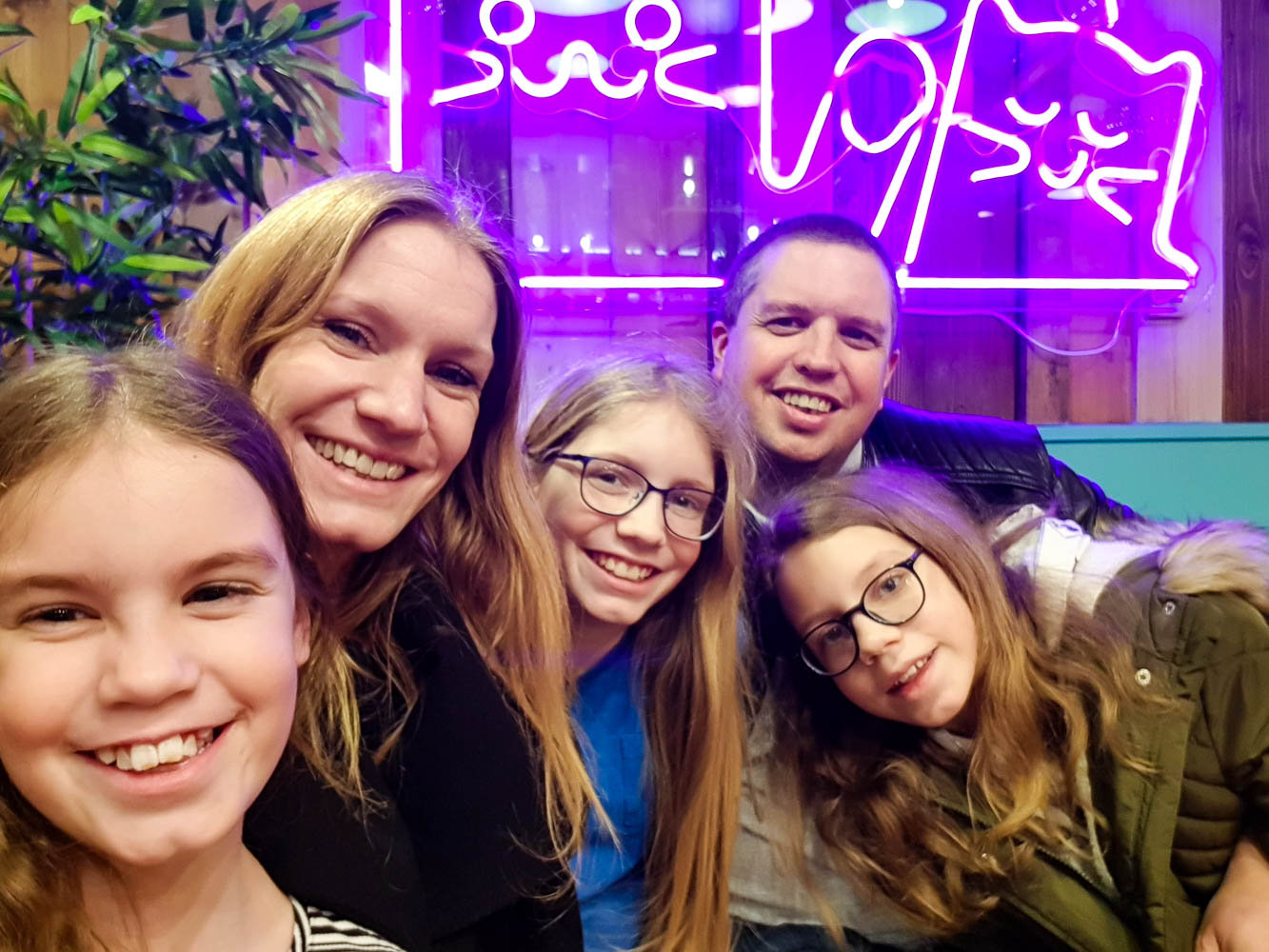 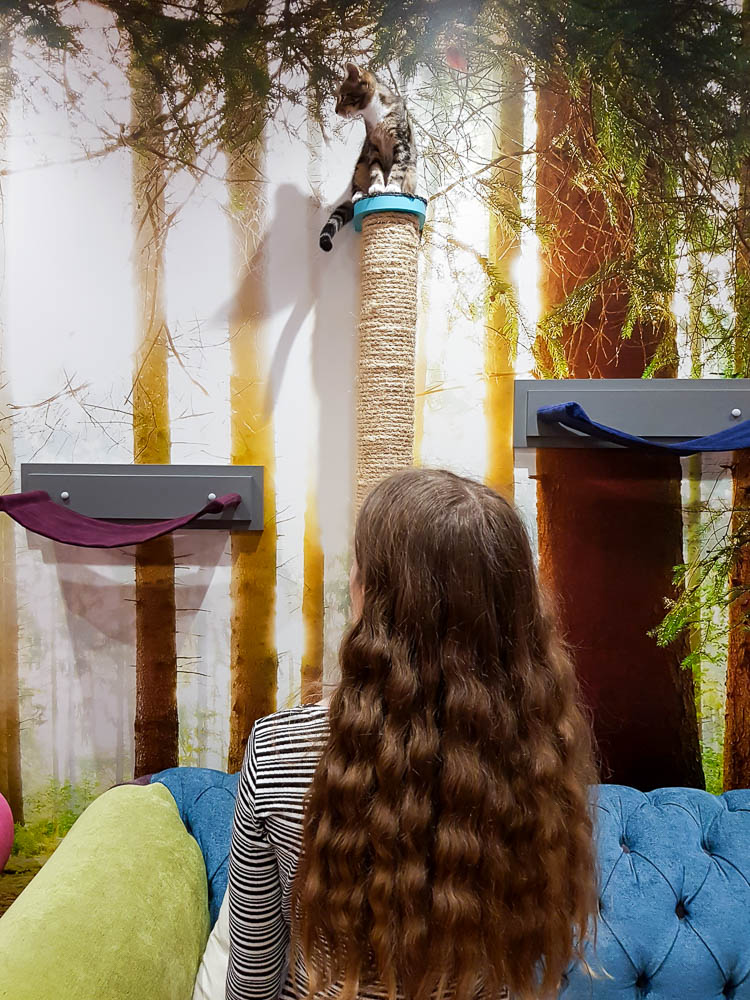 The kittens were so adventurous! This little guy was leaping around all over the place!

You only get an hour at the Kitty Café as it’s so popular, so once our time was up we headed home.  We had a late lunch, after which I managed to convince Lola to come out in the garden with me for some birthday photos as per tradition.  Then it was time to open her presents and cards.  She got some really lovely, thoughtful gifts (including lots of books!) and as always she was super grateful for all of them.  I love how she really inspects each gift and insists on reading every word in her cards.  There was one present which couldn’t be wrapped though…

Lola has been begging to try out horse riding for months and months and months and so we decided to give her some riding lessons as her main present from us.  The look on her face when we told her was utterly priceless – she threw her arms around us and squealed with excitement, absolutely thrilled that her dream was going to come true.  I actually got a little tearful watching her as I know how much it means to her.  I remember being given a gift voucher for ten riding lessons as a Christmas present when I was about her age and it was just the best thing ever.  And now seeing her so excited about getting her chance to ride just brought up so many emotions. 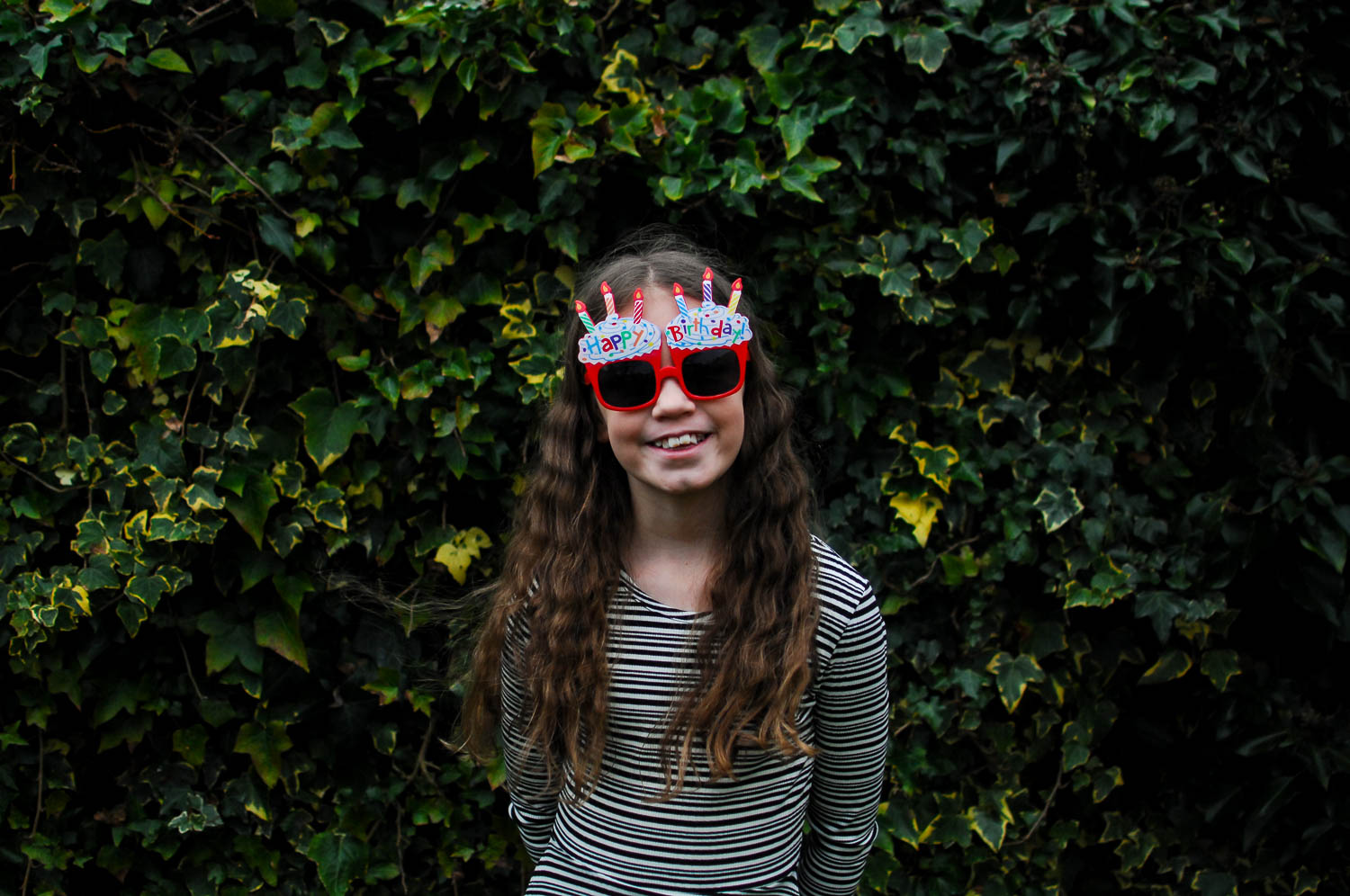 Nobody escapes wearing the birthday glasses! 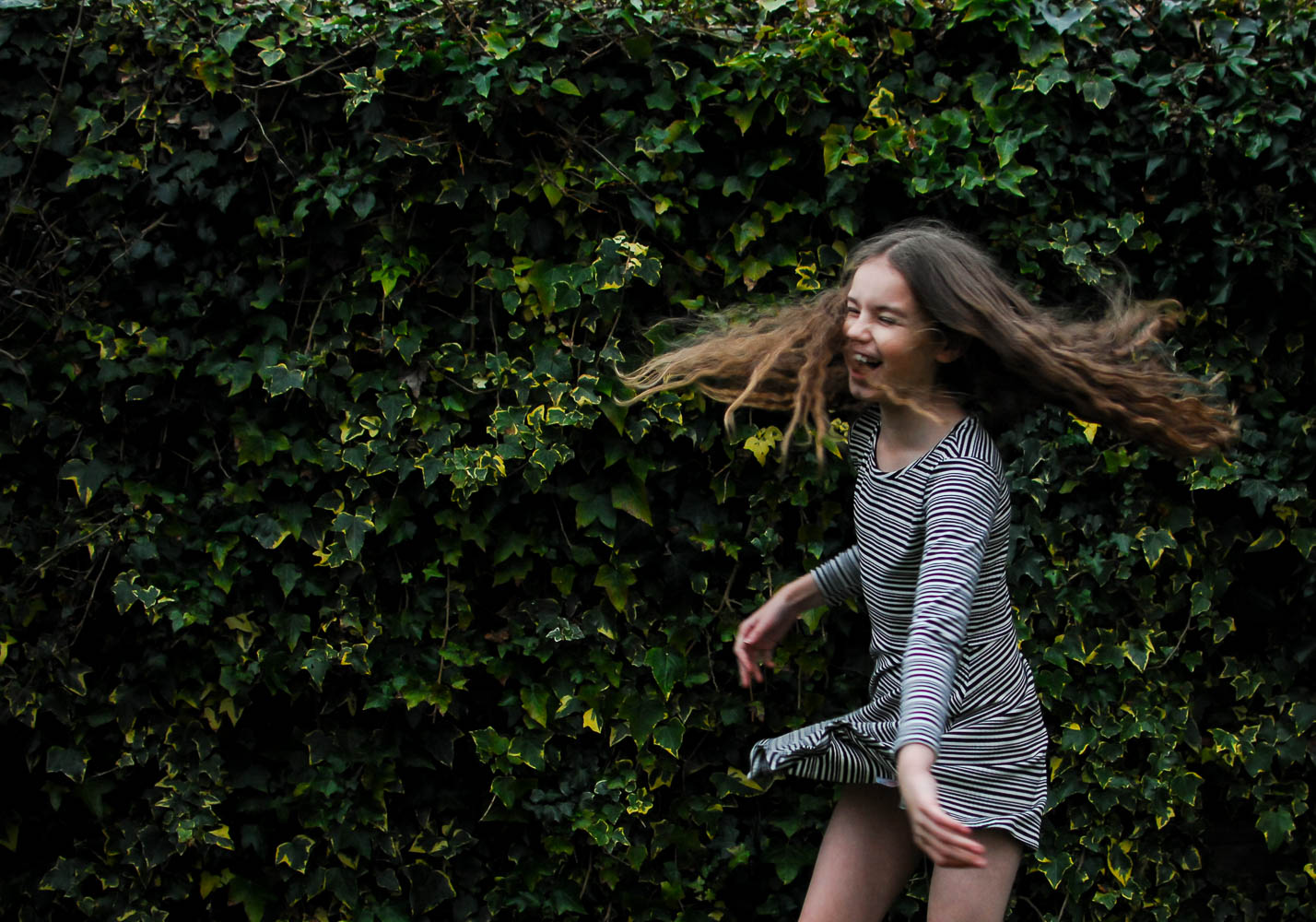 It’s out of focus and technically ‘wrong’ in so many ways but I love this photo of her so much. Look at the joy on her face!

The tradition is that the birthday girl (or boy when it’s the husband’s birthday!) gets to choose what they want for their birthday dinner.  Lola opted for pancakes and so that’s what they had, drenched in golden syrup and chocolate sauce of course.

The whole weekend was supposed to be a continuation of the celebrations.  We’d planned for her best friend, Jess, to come over to our new house for their very first sleepover together and then her first riding lesson was booked in for the following day.  Unfortunately those plans got thwarted.

Poor Lola ended up with some kind of sickness bug/virus in the early hours of the following morning.  I thought it might just be a 24 hour thing but she ended up being really very ill for over a week.  She didn’t eat or drink for five whole days, lost heaps of weight, was dehydrated and confused, had horrendous stomach cramps for days and ended up so weak that she couldn’t even stand up on her own.  Neil and I took it in turns to be with her during the day and overnight, literally not leaving her side. It was really scary and we almost ended up taking her to hospital as we were so worried. Thankfully she turned a corner, managed a nibble of a custard cream biscuit, and gradually got better over the next few days.  She missed the whole first week back at school and it took her weeks to regain her full strength.  I’m grateful no one else came down with whatever it was too – it was a nasty one.

A couple of weeks later the eagerly anticipated postponed sleepover took place and I don’t think I’ve ever seen Lola more excited.  Every five minutes throughout the day she was asking “Is it time yet?” – it really was the sweetest thing.  Lola and Jess have been best friends since Reception class at school and they adore each other.  I hope it’s a friendship that will last a lifetime for them. 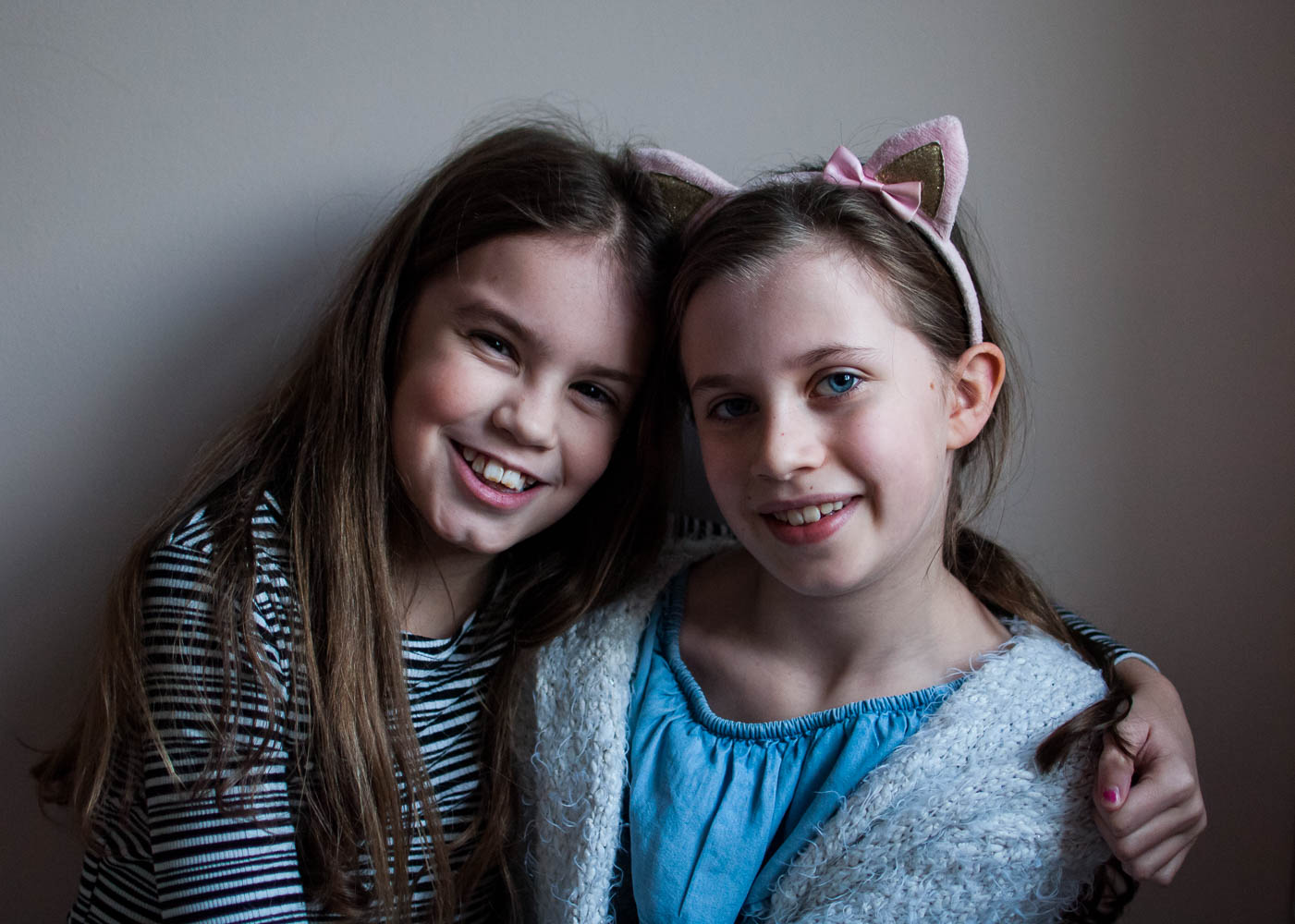 They watched a movie together and everyone had takeaway pizza for dinner (another birthday tradition).  She blew out the candles on the birthday cake she’d missed out on two weeks earlier and giggles filled the house until at least 11pm when I managed to get them to quieten down and go to sleep. 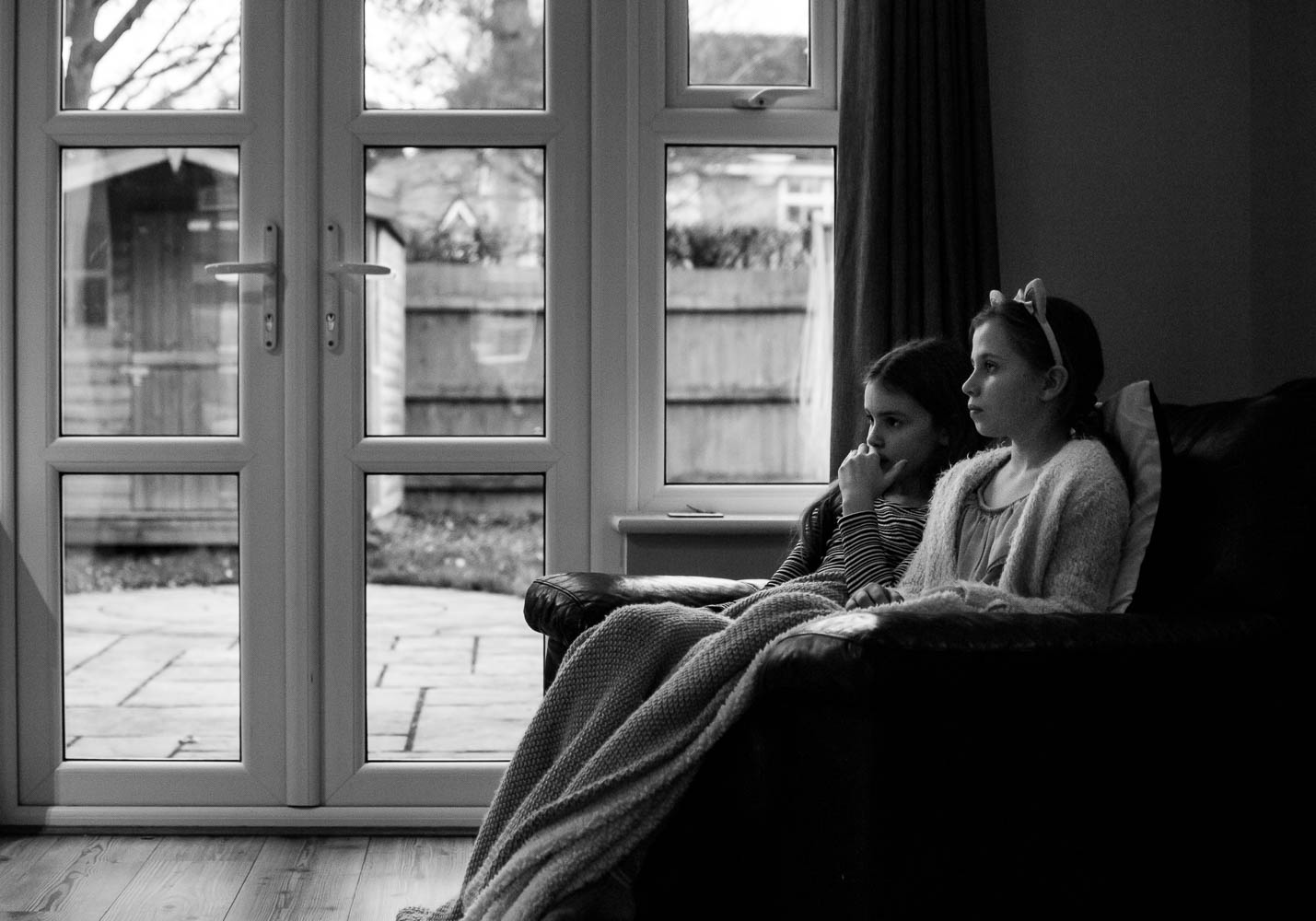 Watching ‘Dumbo’ snuggled up in the armchair together 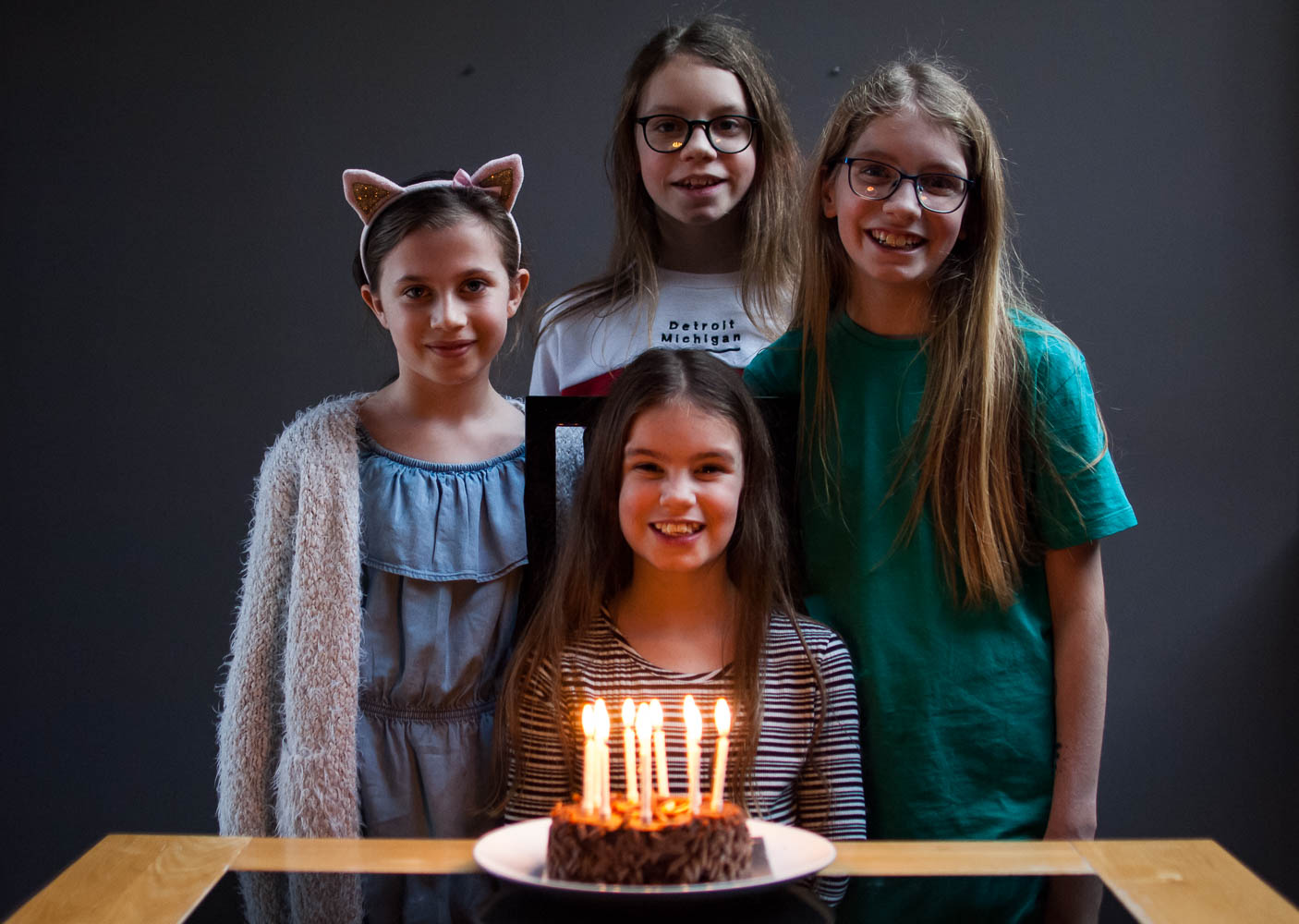 Getting ready to blow out the candles on her birthday cake. I still have no idea what she wishes for!

A month to the day after her birthday, Lola got to have her first ever horse riding lesson.  I could tell she was a tiny bit nervous in the car on the way to the stables but once we were there she showed no sign of it.  She had a little grey pony called Rio – he was rather cheeky but she liked that about him.

She did brilliantly especially considering it’s the first time she has ever sat on a pony.  Her instructor, Becky, had her off the lead rope, walking, stopping, changing direction, and even had her try out both sitting and rising trot.  Lola didn’t stop smiling for the whole lesson and has been begging to go back for her next one ever since. 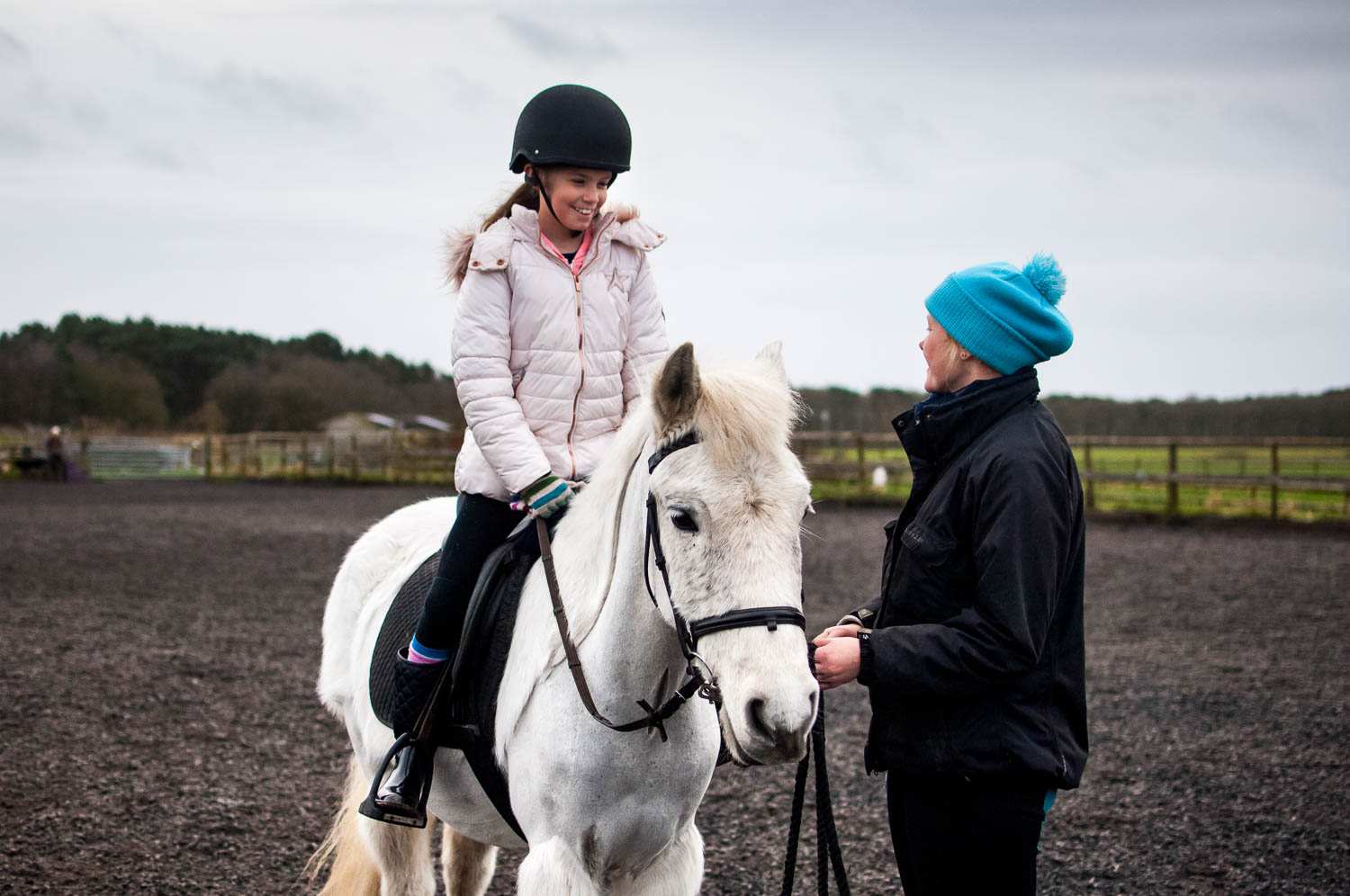 Listening closely to everything her instructor was saying 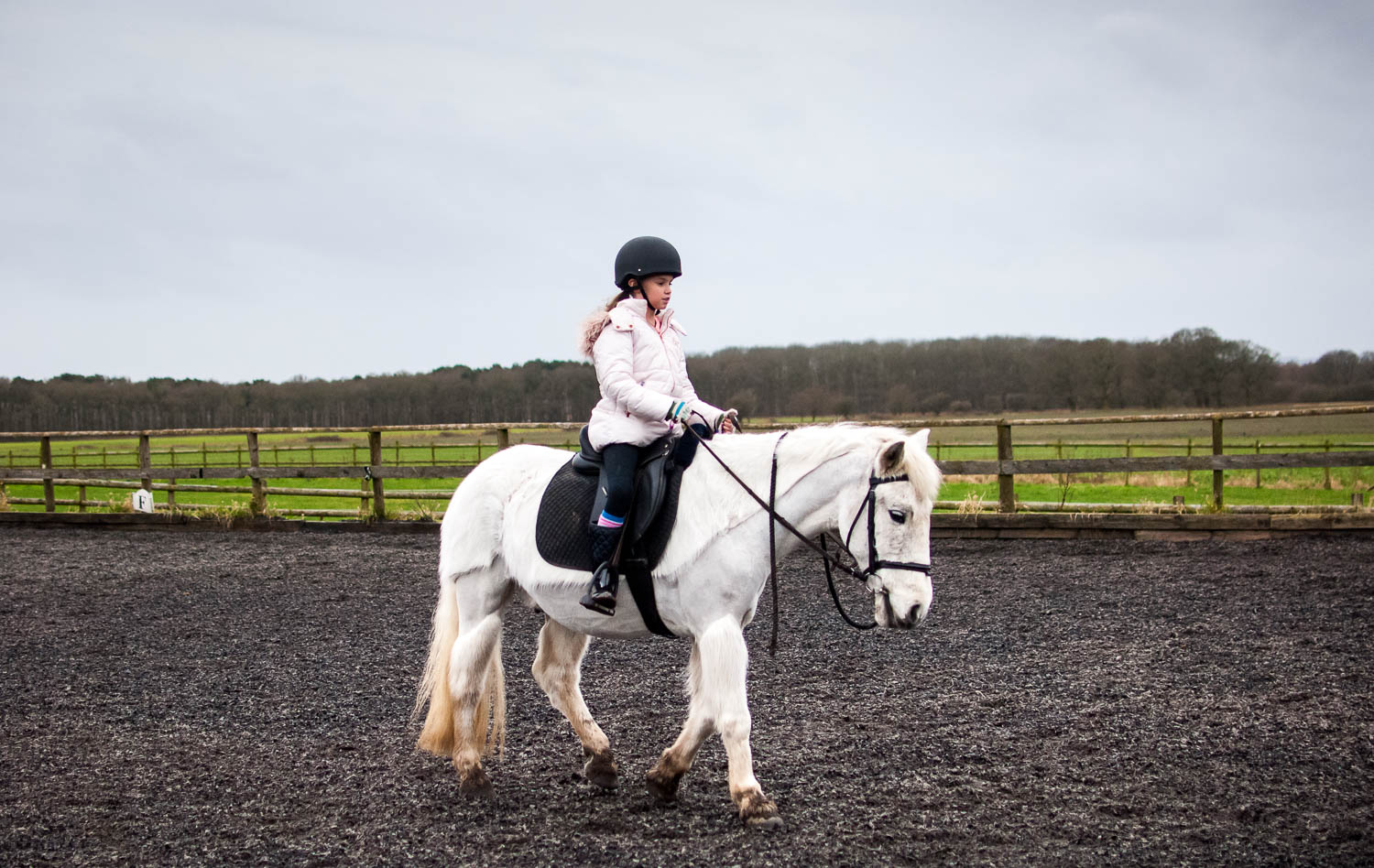 Off the lead rope on her very first lesson! I love how confident she was. 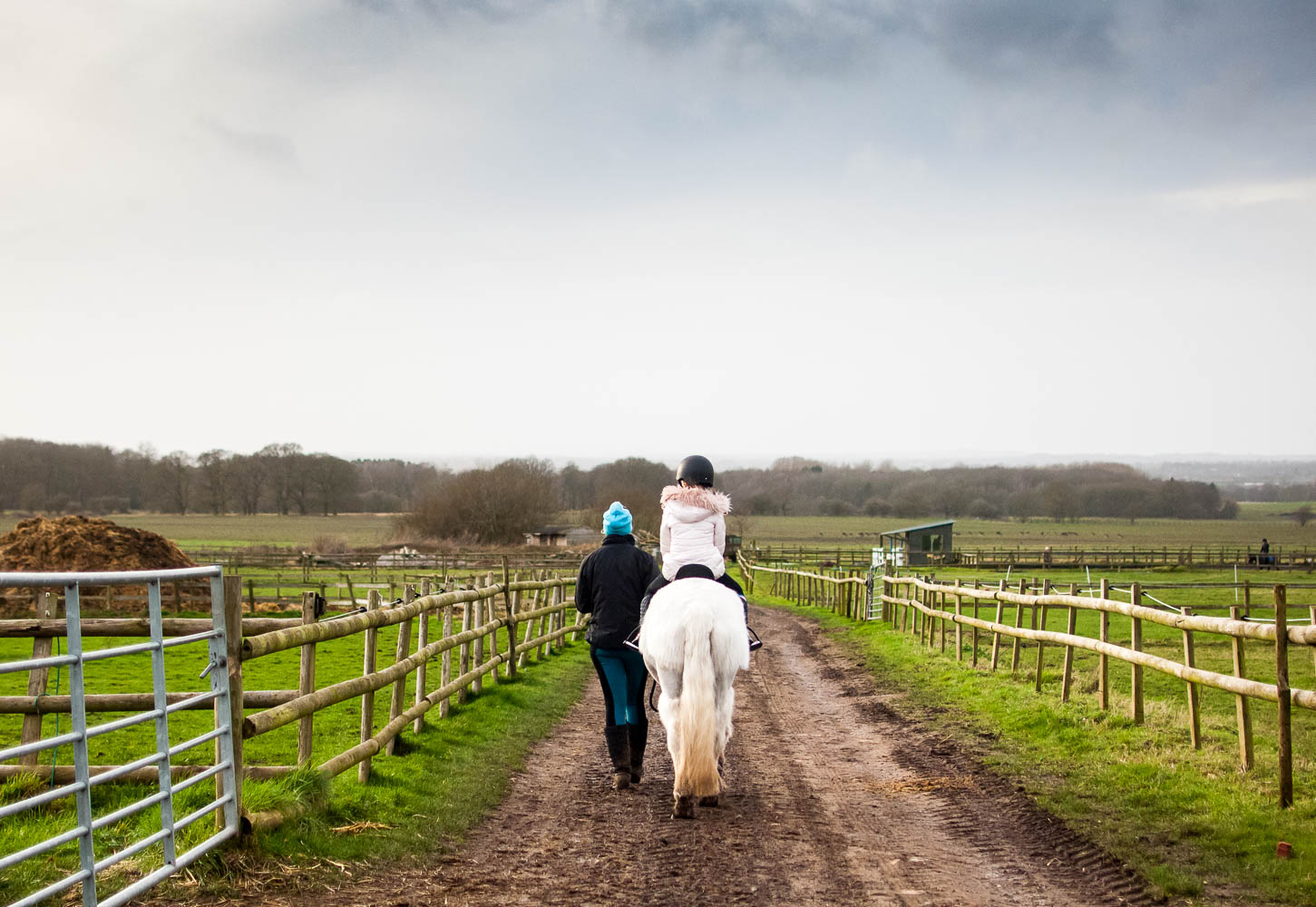 She loved every minute of her first lesson and can’t wait to go back for more.

Last year I asked all three girls to answer each of the following questions on their birthday.  I wanted to start a little tradition of asking them each year so I can document them as they change for each of the girls over time.  Here are Lola’s answers for this year:

This is Lola, aged ten…

~ Favourite thing to do: “Horse riding!”

~ What she’s into: “Reading, cats and singing”

And just like that it feels like we’ve entered a new era.  I no longer have any babies – they’re all tweens and teens now.  I’m immensely proud of Lola – it’s not been an easy year for her in many respects and she’s got through it all with a smile on her face.  She’s my sunshine girl and it’s such a privilege to be her mama.  I can’t wait to see what the next year has in store for her.

An Afternoon In Clovelly

Bude is incredibly well positioned at the gateway to North Cornwall, providing easy access to a vast number of beautiful locations both further down…