Towards the end of my epic year spent travelling in Australia in 2013, the guy I had been travelling with and I went our separate ways.  A couple moved into the shared dorm-room in Sydney that we’d been living in at the time.  Their names were Tamarin and Pete, and they were just at the beginning of their travelling adventure.  We did our own things, but on the occasions that we were in the room at the same time, we had some deep and meaningful conversations about life and love and everything in between.

Three days later I moved out to continue my travels on to New Zealand for three months.  We exchanged email addresses as was customary and kept each other updated with where we were and what we were up to.

A couple of years later I was working in London fundraising for a charity, had met the man who would eventually become my husband and was very much back to reality.  Tam and Pete were back in the UK as well and Tam was also fundraising in Central London, so we managed to meet up for a quick drink after work one day.  That was the last time I saw her in person.

Fast forward a decade or so and we were still very much in touch on social media.  She and Pete had got married, Neil and I had got married, Tam had trained to become a yoga teacher, I’d moved out of London, had three kids and was working as a therapist…all the usual life changes that happen as you grow up.  We ‘liked’ each others photos, commented on statuses and privately messaged each other when big, personal, emotional things were going on for us both, supporting each other from afar.

After my Dad died at the start of last year, I finally got round to reading a book I’d been wanting to read for a long time: ‘Wild’ by Cheryl Strayed.  Her Mum had died of lung cancer as well and she felt so lost – it mirrored exactly how I was feeling.  I put something on Facebook about it and instantly had a text from Tam saying that she was reading the exact same book at the exact same time.  We decided there and then that we were soul sisters and that the Universe had placed us in each other’s lives for a reason.

Then, at the start of this year I found out that Cheryl Strayed was going to be giving a talk in Central London about her book.  On the same wavelength again Tam and I messaged each other and booked two tickets – there was no question of a doubt that we’d be going together.  We eagerly waited months and months for the date to arrive.  Finally, 17th October rolled round and I made my way to Central London in the torrential rain, feeling a little nervous about seeing her after all these years.

Of course I needn’t have worried at all – it was like we’d never been apart.  We had a big hug, and then set about catching up on the last decade of news as we waited for the talk to start.

Cheryl’s talk itself was as awesome as I’d anticipated.  Inspiring, funny and emotional, she spoke openly of things that I’d thought and felt but never been able to let out of my head and heart.  She talked about grief and love and sex.  She talked about healing and writing and surviving things that seem impossible to survive.  She talked about depression and the two voices in her head – the crazy voice and the non-crazy voice, and how she was doing her best to listen to the non-crazy voice that she’s starting to realise is actually  the real her.  And she talked about accepting that the crazy voice is there and will probably always be there and that trying to fight it and get rid of it just causes struggle and suffering, so maybe we just need to agree to peacefully co-exist with it instead.  And she talked about storytelling and connection and reaching for the light.  All things I knew, really, but had forgotten.

It was good to be reminded.

After her talk was over I *should* have headed straight to Euston to catch my train home.  Instead I decided to miss my train and catch a later one so I could stay for the book signing Cheryl was doing – I knew I’d really regret it if I didn’t and I don’t want any more regrets.  I already have too many.  And so, we queued and chatted some more.  The line moved relatively quickly and although we were near the back we only had to wait about half an hour before it was our turn.

I was so tongue-tied when I got to the table Cheryl was sitting at, I could barely speak.  I managed to stutter out a little bit of my story about my Dad and how much her book had touched my heart, and she spent a minute or two listening.  I know she must hear stories like mine all the time, especially on a book tour where she’s constantly meeting new people in new cities day-in, day-out.  I have no doubt that she forgot me as soon as I moved away from the table and the next person was in front of her.  But for me, it was special, and something I’ll remember forever.  This woman had survived unspeakable things, and if she could, then so could I.

So Cheryl, if by some mad, six-degrees-of-separation, Universe-bending miracle you happen to end up reading this, I want to say thank you.  For helping me realise that I can still be ok.

Some photos from the evening (large ones from my camera, smaller ones were taken on a phone): 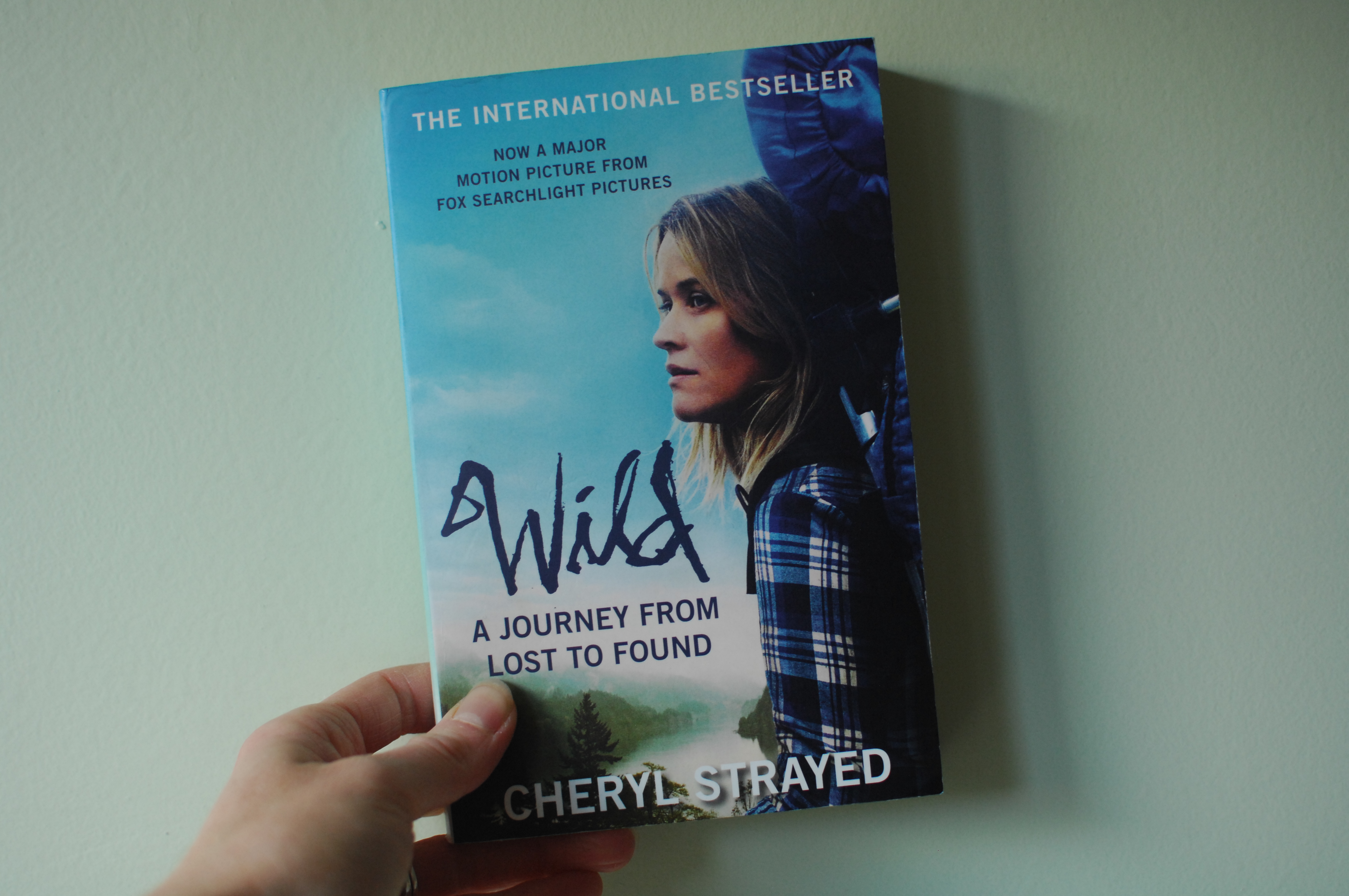 Cheryl’s book ‘Wild’. I took my copy with me, hoping that she’d be signing books after her talk. I have folded down the corners of so many pages in this book – almost every page had something I wanted to remember. It got made into a film, starring Reese Witherspoon (someone else I admire!). Both the book and the film are well worth reading/watching if you get the chance. 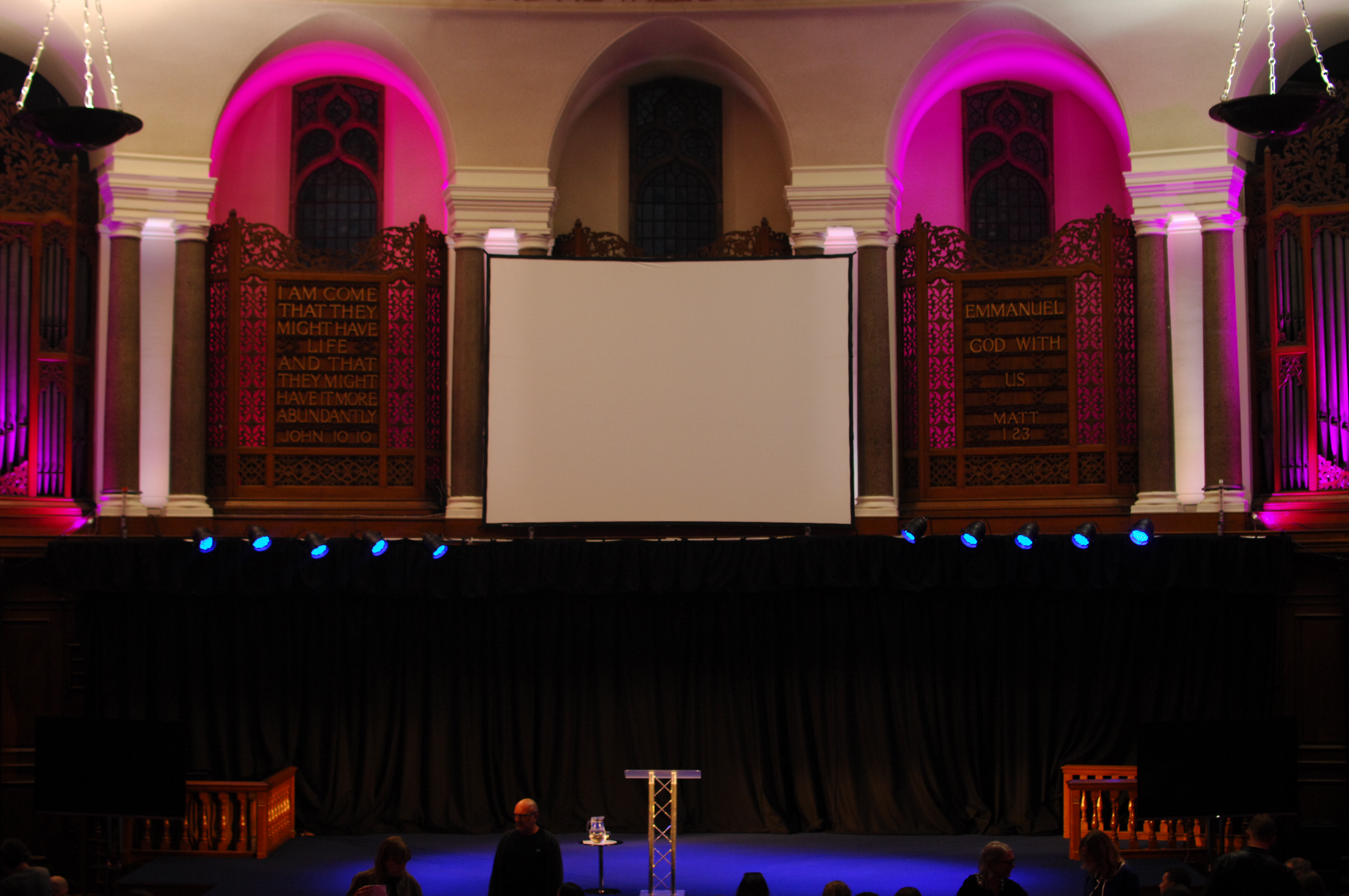 The stage at The Emmanuel Centre in Central London, where the talk was being held 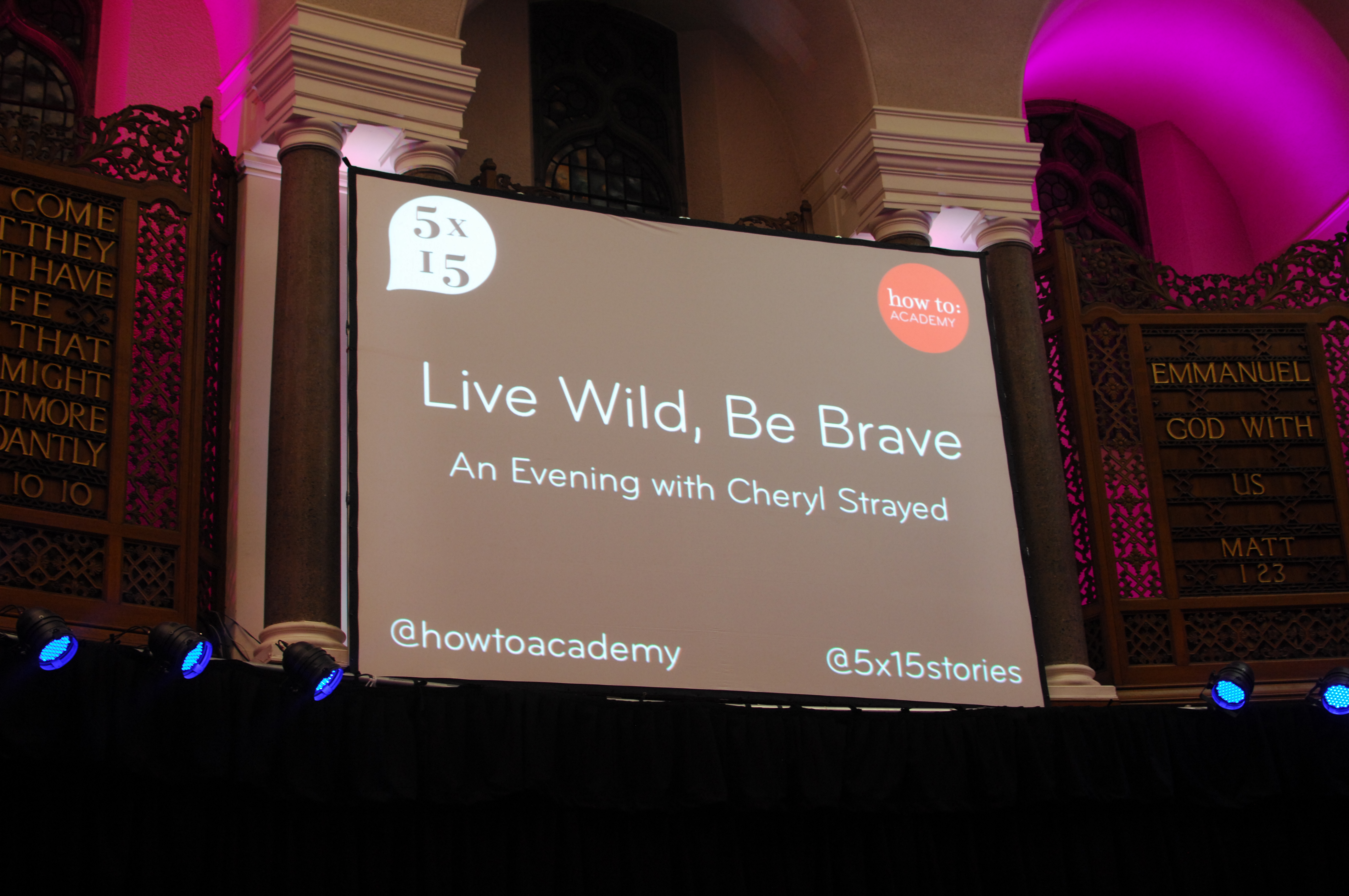 Cheryl in the middle of her talk 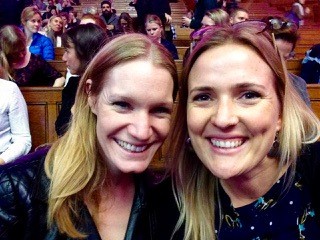 Tamarin and I in the audience 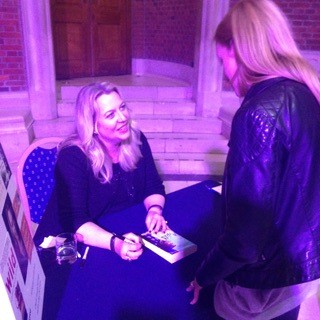 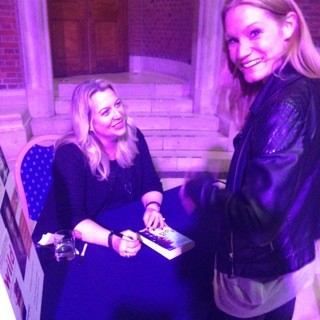 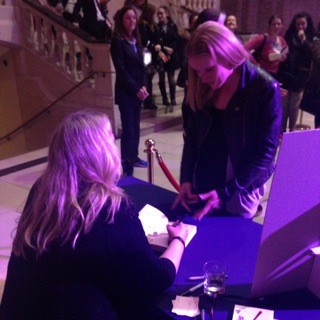 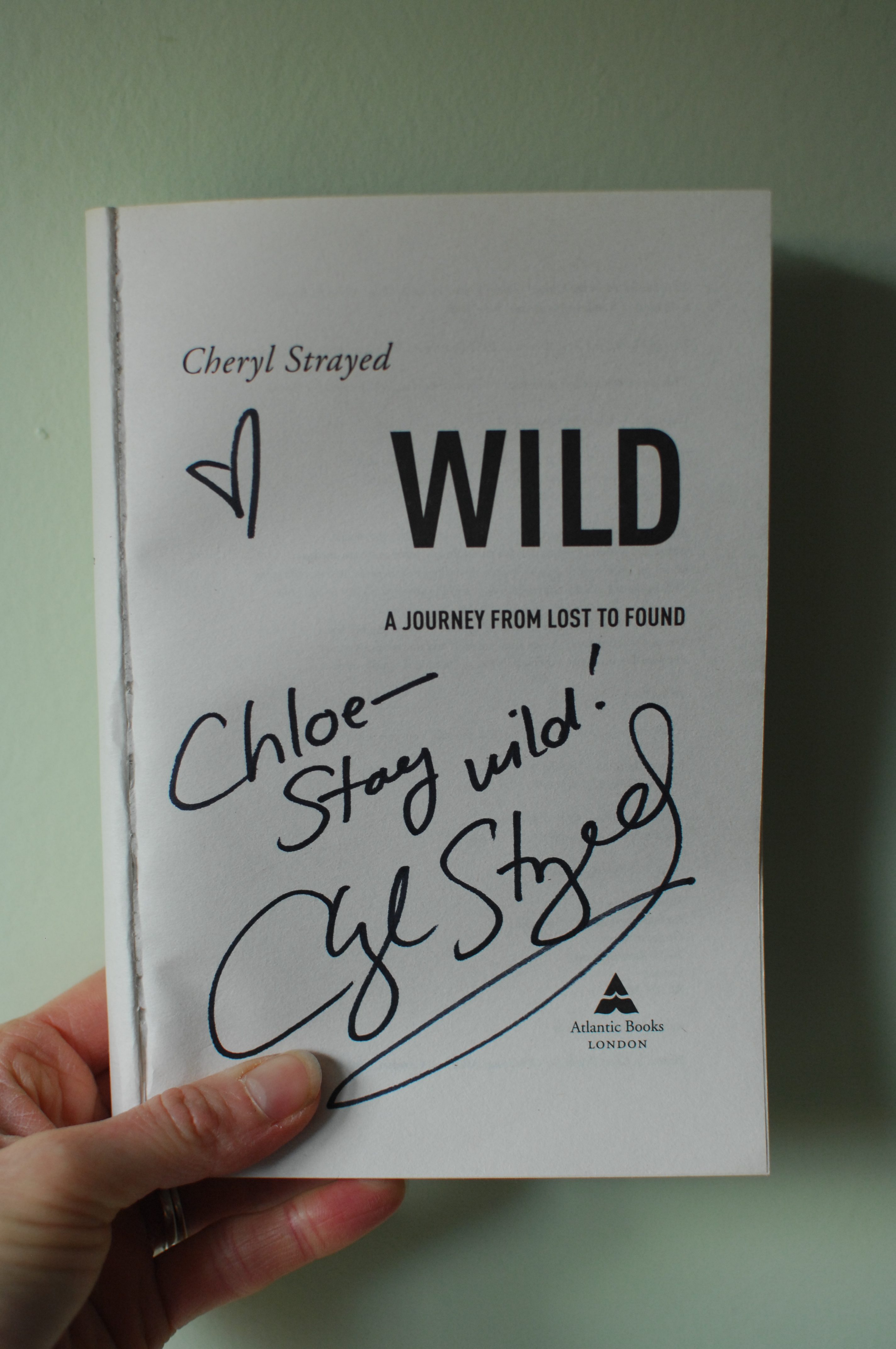 So there we have it – another thing ticked off of my ’40 Things Before I’m 40′ list.  When I originally added ‘Meet a celebrity’ to the list it was meant to be a bit of fun.  I knew I wanted it to be someone that I admire though – not just a random person who is famous for being famous.  And I ended up meeting the best kind of celebrity there is – an author.

So that’s seven down and 33 still to go.  I wonder if I can tick off one more by the end of this year…?

Hi guys! Bullet journaling is the new big thing and I’m sure some of you could use a few tips and tricks. I have created a…